The wait is finally over, the new 2018 Dodge Demon is the most powerful muscle car ever built. In fact, the term muscle car really doesn’t do the Demon must justice. The fact is, this is a legitimate drag car. The Dodge Demon is the first ever production car fitted with a four-point harness, drag radials, and trans brake. What makes this car even more insane is that it only takes 100 octane; that’s right, so if you purchase one of these bad boys, you better live near a race track or gas station that sells it or you’ll be enjoying the Demon’s interior waiting for AAA.

Under the hood of the Demon is an all-new 6.2-liter supercharged Hemi motor cranking out 840 horsepower and 770 pounds-feet of torque, which makes this the most powerful production V8, ever. When Dodge says all new, they mean it. The only thing the Demon shares with its little Hellcat cousin are its cylinder heads. Everything else is all new, including a new deck honed block, pistons, crankshaft, connecting rods, camshaft, valve train and a new larger 2.7 liter supercharger. 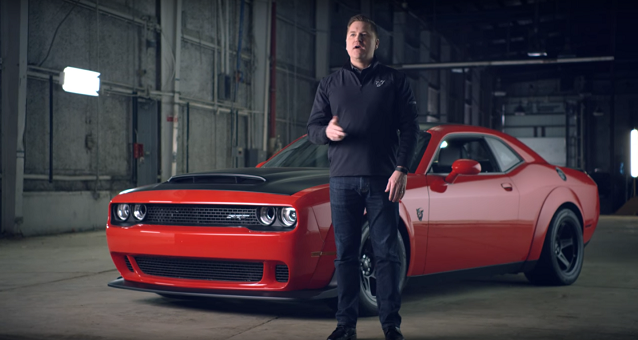 The Dodge Demon is so powerful that after the NHRA certified it’s 9.65 second 1/4 mile, they banned it from competition. Mainly because with a car this fast from the factory you will need a competition license and extra safety equipment. Dodge is still seeing this as a plus. “Being banned from the NHRA with this car at first sounds like a negative but reality is it’s really huge street credibility for this car. Even the National Hot Rod Association says you’ve pushed too far, you’ve done too much, you’ve broken a record that’s not supposed to be broken in a production car. To me that letter is a badge of honor.” says Tim Kuniskis Head of Passenger Cars Dodge, SRT, FIAT, Chrysler of North America.