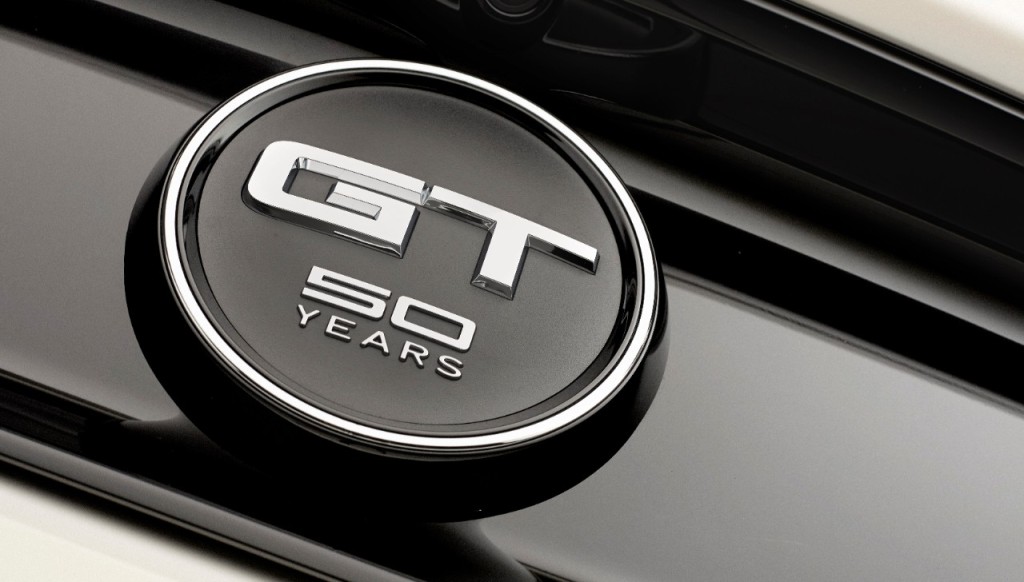 The first Ford Mustang was introduced to the public on April 17th at the 1964 World’s Fair so it seems only fitting that Ford Motor Company will introduce the new 50 Year Limited Edition package of the 2015 Ford Mustang on April 17th at the 2014 New York International Auto Show. It had long been rumored that Ford would offer up a vintage themed S550 Mustang to celebrate the 50th anniversary and as we headed into the 2014 Big Apple show it came as no huge surprise that the automaker opted to design a limited edition package to celebrate the original pony car’s 50th anniversary in the most fitting way possible.

“When Mustang was approved for development more than 50 years ago, I don’t think anyone imagined it would spawn such a dedicated base of fans around the world and still be in production today,” said Bill Ford, executive chairman, Ford Motor Company. “We are thrilled to be here in New York – where Mustang was first shown to the public at the 1964 World’s Fair – to re-create that historic event for today’s Mustang enthusiasts.”

The 50 Year Limited Edition 2015 Ford Mustang is based on the GT fastback, fitted with every available option for the new Mustang GT including the Performance Pack as well as some special features that are unique to the 50 Year package. These specific features begin up front, where Ford has added a 1964-esque grille treatment that has the running pony in a chrome paddock, with a set of chrome strips running away from the sides of the running pony badge, through the middle of the large S550 grille. The back end gets more chrome tidbits, including unique chrome trim around the segmented LED tri-bar taillights and in the GT badge in the middle of the rear end, complete with the 50 Year logo.

“The new Mustang blends a muscular, contemporary shape with design cues that define it as quintessentially Mustang,” said Moray Callum, Ford vice president of design. “The 50 Year Limited Edition adds details that set it apart from other Mustangs, while hearkening back to the 1965 original.”

The most striking and most interesting aspect of the 50 Year Limited Edition 2015 Ford Mustang is the addition of the louvered rear windows. Louvers have always been a popular addition to the Mustang, but for the 50 Year package Ford designed the most unique set of rear quarter window louvers ever – using layered glass to create the shape of a triple louver setup rather than a fiberglass piece that obstructs the view through the rear side windows. To clarify, the rear quarter windows don’t have louvers attached to the outside – they have louvers basically molded into the glass for a look that is unlike anything that we have seen on the market before. These louvered windows look amazing and after debuting on the 50 Year Limited Edition 2015 Mustang fastback, I definitely expect to see them on more S550 Mustang fastbacks…either as a Ford Accessory piece of maybe even a factory option. Finally, the 50 Year 2015 Mustang is available in Wimbledon White (just like the Mustang that debuted in New York on April 17th 1964) or Kona Blue.

“Chrome trim was much more prevalent on cars in the 1960s than it is today, so we added some discreet highlights for the grille, side glass and tri-bar taillamps,” said Callum. “The darker Kona Blue provides a particularly striking contrast against the chrome.”

Both inside and out, the 50 Year Limited Edition 2015 Ford Mustang features every single optional feature that is available on the 2015 Mustang GT fastback so buyers will enjoy a fully loaded interior with all of the high tech goodies that you could want while the Performance Pack adds unique 19 inch rims wrapped in Pirelli tires, Brembo high performance brakes and a Torsen differential with 3.73 gears in manual models. Those buyers who opt for the automatic transmission in their 50 Year Limited Edition 2015 Ford Mustang won’t get the 3.73 Torsen differential, instead getting a set of 3.55 gears in a standard differential.

To put into better terms just how heavily optioned the 50 Year Limited Edition 2015 Ford Mustang will be when it hits dealerships, consider the fact that there are no options for buyers aside from the exterior color and either the manual or automatic transmission. Every other option that buyers of the “normal” 2015 Mustang GT fastback is standard on the 50 Year edition.

“Mustang fans love to drive their cars, even the rarer examples of the breed, so we built this limited-edition from the best-performing 2015 Mustang available – the GT fastback with the performance pack,” said Dave Pericak, Mustang chief engineer. “While some collectors will undoubtedly stash this car away in a museum, those who choose to hit the open road will get a world-class sports car that can run with the best.”

When production of the 2015 Ford Mustang begins later this year, the first 1,964 examples built will sport the 50 Year Limited Edition package. Based on that, I would imagine that Ford will be taking pre-orders on these unique models as to avoid slowing down production so if you want to be one of the 1,964 people who will get one of those first edition S550 Mustangs, I suggest that you make a visit to your local Ford dealership with a check in hand to put money down on your early 2015 Mustang GT.