As fireworks rocked the nation this weekend, two World of Outlaws drivers drove to some of the most impressive Independence Day victories ever seen at Cedar Lake Speedway. Airing live on CBS Sports Network, the World of Outlaws Independence Day mega event began with wins from reigning World of Outlaws NOS Energy Drink Sprint Car Series Champion Brad Sweet, who would sweep back to back feature races on both Friday and Saturday night to take home $40,000 for his Kasey Kahne Racing team. Along with Sweet, the driver known as the Rocket of the World of Outlaws Morton Buildings Late Model Series stepped up to the plate and knocked a home run out of the park after dominating the final 4th of July feature race.

While Friday night’s race would bring an easy win for Sweet, the 4th of July finale race, was anything but a breeze for the No. 49 of Sweet. In fact, with a third-place finish in his Drydene Heat Race, Sweet was one spot short again of making the DIRTVision Fast Pass Dash, placing him ninth in the lineup for Saturday night’s 35-lap Feature. Despite this, Sweet put up one heck of a battle with a large crowd of fans in attendance – who all passed through a state-of-the-art COVID-19 screening – and thousands more watching on CBS Sports Network.

Although the No. 41 of David Gravel would lead the 24-car field to the drop of the green flag, his straightaway lead was cut to nothing when a caution came out for Scotty Thiel slowing on track on Lap 4. That positioned second-place Kerry Madsen to his outside and third-place Sheldon Haudenschild behind him on the restart. Gravel was able to pull away from the field again, but when he hit slower traffic a few laps later Madsen and Haudenschild closed in. As Gravel and Madsen chased each other for the next few laps, Sweet continued his masterclass of running the bottom on the restart and made quick work on the lead drivers. As the final laps approached, Sweet finally found his way to the inside of the top three and with four laps to go, he was at Gravel’s bumper.

As Gravel stayed committed to the top of the track, as it hadn’t served him wrong all race, Sweet found a way to pass the pole sitter with three laps to go. After which, Sweet put his car on cruise control and drove away with the win.

“We had two unbelievable cars this weekend,” said Sweet during the historic CBS Sports Network broadcasted event. “I can’t thank my Kasey Kahne Racing guys enough for all of the hard work. It might look easy but I’m telling you this is a lot of stress; a lot of hard work and it is definitely paying off.” 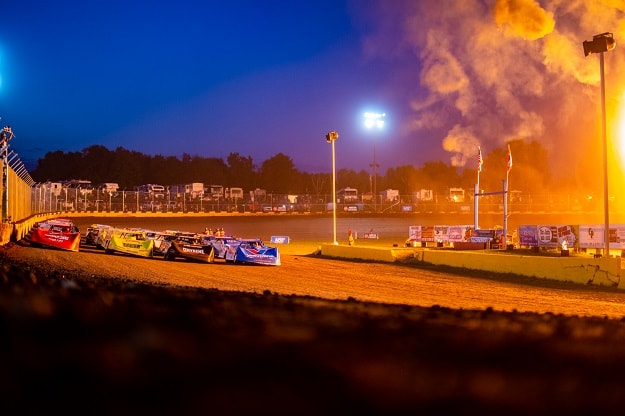 While Sweet would dominate the weekend for the World of Outlaws NOS Energy Drink Sprint Car Series, Sheppard would have to wait until Saturday night’s feature race on CBS Sports to pull his rockets and race to a dominating win. On Friday afternoon, Ashton Winger candidly admitted in conversation “I honestly might never win a World of Outlaws race. I know that.” Just five hours later, he proved himself wrong.

In fact, the 20-year old Rookie of the Year leader out-dueled the best in the business to earn one of the most hard-fought first career victories in the World of Outlaws Morton Building Late Model Series. Although Sheppard would fall to a series rookie on Friday, Saturday night’s firecracker spectacular would give the Rocket1 Racing driver the opportunity to earn his nickname – the Rocket.

After starting on the pole for the final 40 Lap feature of the weekend, Sheppard and his No. 1 Rocket racing machine actually fell to second place Cade Dillard on the opening lap. Despite this Sheppard of New Berlin, Ill. rocketed away from Cade Dillard on the second circuit and never looked back en route to his fourth career World of Outlaws win at Cedar Lake Speedway and his sixth victory of the 2020 season. Sheppard’s latest triumph aboard the Rocket1 Racing, Valvoline No. 1 also came with a cool $20,000 payday that he earned LIVE on CBS Sports Network.

“This win is incredible,” said Sheppard. “We really got lucky there at the beginning of the race when that caution came out. The bottom was still a little slimy and Cade was able to get a better start than I was. Luckily, I barely got him when we crossed the line on that second lap and that was exactly what I needed to earn this win.”