Those of us who are Mopar fans are aware that, while getting many parts for our cars (especially suspension stuff) can be quite expensive, most driveline parts are pretty bulletproof. The 318 and 360 CID engines are torquey and wind up fairly quickly. The venerable 727 Torqueflite transmission can handle gobs of power without major upgrades. You can put gobs of power through the original differentials without much worry. The weak spot in the driveline of the older Mopar is the axles. They can handle a slightly built up engine, but if you’re really building massive power, you need to install new axles.

You might as well R&R (remove and replace) the bearings and seals while you’re replacing the axles, since they are pressed on the axles. The project described below is pretty easy and shouldn’t need any special tools, except maybe a slide hammer. One word about this project: The axle bearings in the older Mopars were tapered, adjustable, and a pain in the butt to get exactly right. There’s a non-tapered sealed RP400Green Bearing set that’s available, which will be what we use as we reassemble everything. Let’s get at it, shall we?

What You’re Going to Need to Complete This Project

First and foremost you’ll need to climb under the rear of the car and determine exactly which rear end you’ve got. Most will be either a 489 (if you’re lucky!) or the 742 case. Once you know which differential center section you’ve got, you can order the new axles, bearings, and seals. Remember, axles for drum-type and disc brakes are different, so be sure you get the right ones. Here’s what else you’ll need to do this job:

One cautionary note here: Most pre-1970 or so Dodge, Chrysler, and Plymouth vehicles came with left-hand threaded studs on the left side of the car. This is one reason I recommend installing new studs and getting new lug nuts when you swap out the axles.

Get the Rear in the Air and the Wheels Off 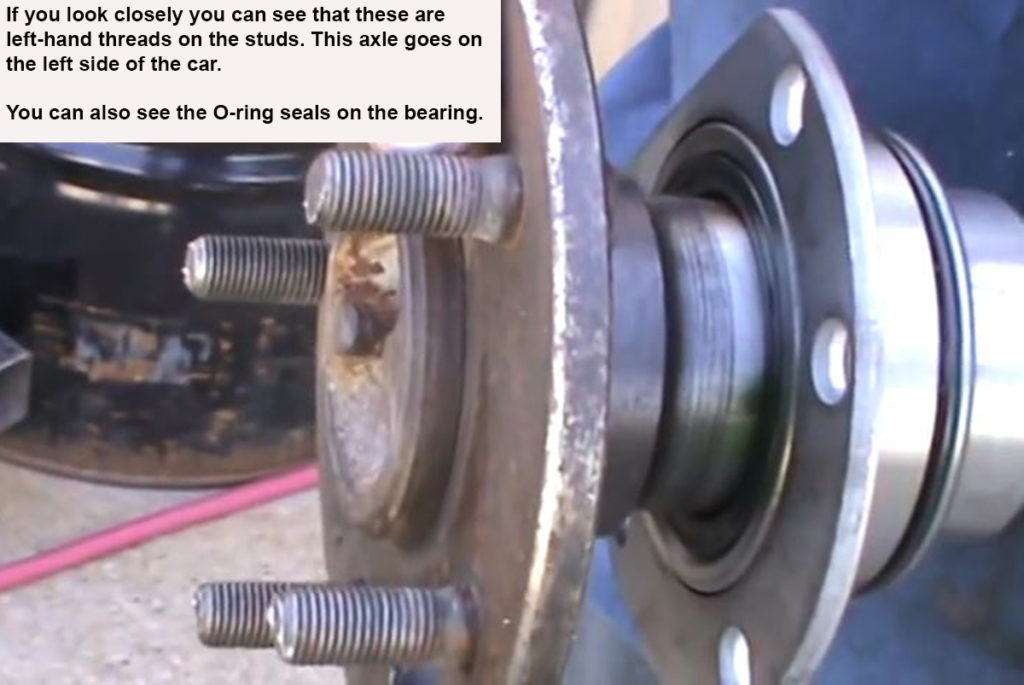 Park your car on a flat and level surface and chock the front and rear of one of the front wheels. Do NOT set the parking brake. Slide the jack under the rear end housing and raise the car enough for you to be able to get underneath. Slide the jack stands under the frame on both sides in front of the rear wheels and carefully lower the car onto the stands. If you don’t have an air compressor and impact gun, loosen the lug nuts before you lift the car.

Once the car is in the air, remove the lug nuts and wheels. Next, pull the brake drums off.  If they haven’t been removed in a while, you may have to lightly “convince” the drums to come off. Use some Brakleen or similar product to thoroughly clean the brake backing plates. 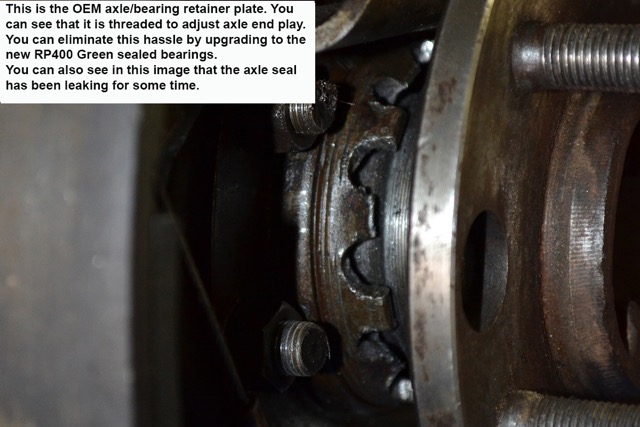 Take a look at the axle and you’ll see one or two holes between some of the wheel studs. One reason for this is to let you access the five axle retainer plate nuts with a ratchet and socket. These nuts wil be either ½-inch or 9/16-inch. Slap a three-inch extension between the socket and ratchet and remove them. 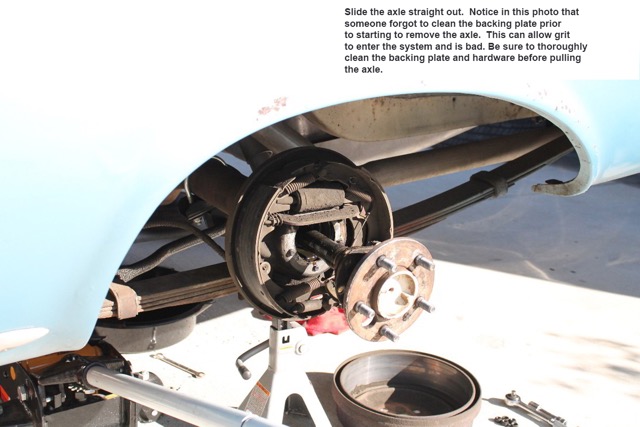 With the retainer plates hanging loose, you can remove the axles. Grasp the axle flange and firmly (and carefully) pull the axle straight out. You may need to use the slidehammer with the axle removal attachment. If so, firmly attach it to the axle using three lug nuts and firmly slap the sliding portion against the knot at the end of the handle a few times to loosen the end of the axle from the differential center section.

Remove the Retainer Plates and Install the New Bearings and Seals

Most of you won’t have the tools and equipment required to remove the retainer plates from the old axles. This means you’ll need to take the old axle assemblies and the new axles down to a machine shop to press the old bearings and retainers off, remove the plates, and then press the new bearings, gaskets, and retainer plates onto the new axles. If you choose to go with the Mopar Performance P5249444 bearing sets linked to above, you can skip removing the old parts, because the sets come with new retainer plates. If you don’t have access to an impact gun and a compressor, I recommend having the machine shop press in the new lug studs as well. 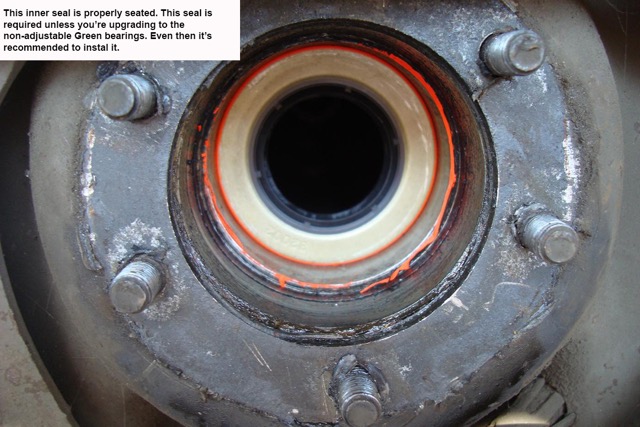 Technically, if you choose the Mopar Performance bearing sets, you really don’t need to worry about this step, because the new bearings have O-ring seals on them. However, one of my favorite sayings is “Better safe than sorry,” so let’s do it. Find the seal driver plate that fits inside the inner circle of the axle seal and is just a hair smaller in diameter than the axle tube.

Firmly insert the new seal, with the open end facing inside the axle tube, until it stays of its own accord. Place and hold the seal driver against the seal. Using a hammer, firmly strike the handle of the driver. Pay attention to the sound the hammer makes as it strikes the driver handle. It’ll sound a bit hollow until the seal is properly seated in the axle housing. 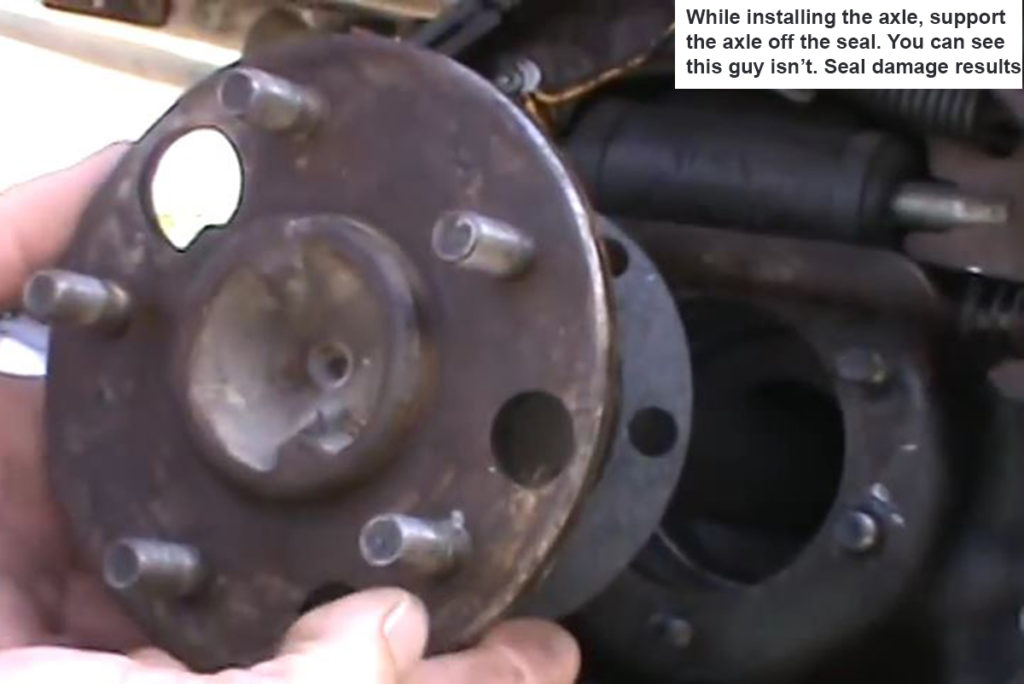 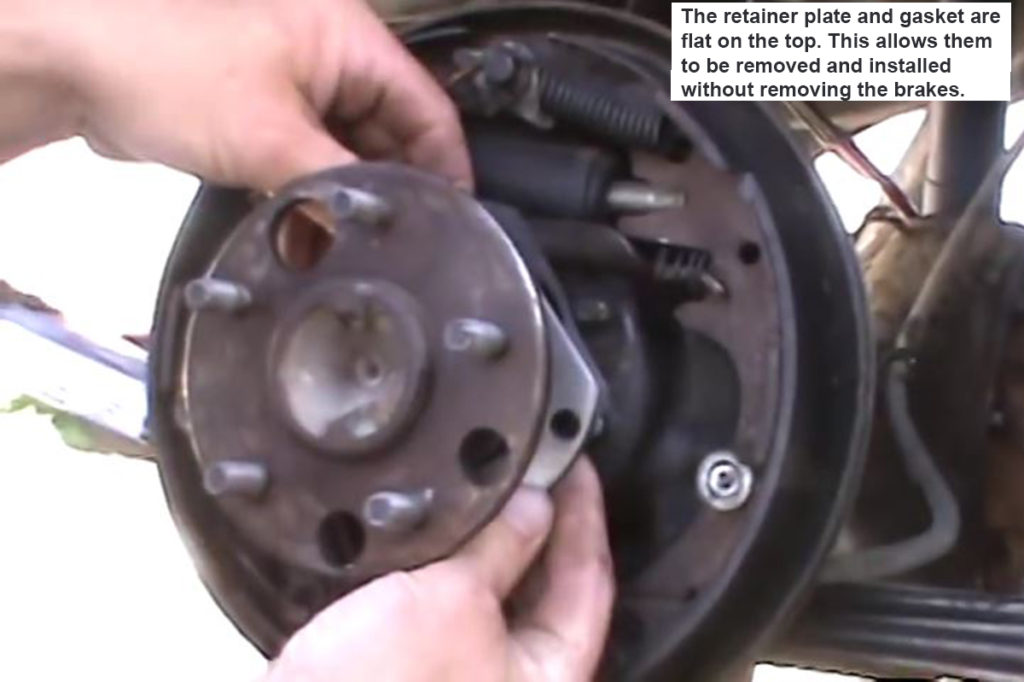 As I mentioned above, if your Mopar is a pre-1970 model, and you didn’t buy new lug studs, chances are good that you’ve got one axle with studs with right hand threads (‘rightey-tightey”) and one with left hand thread (counter-clockwise tightens the lug nuts) studs. Pay attention when installing the new axles so you don’t mix them up. 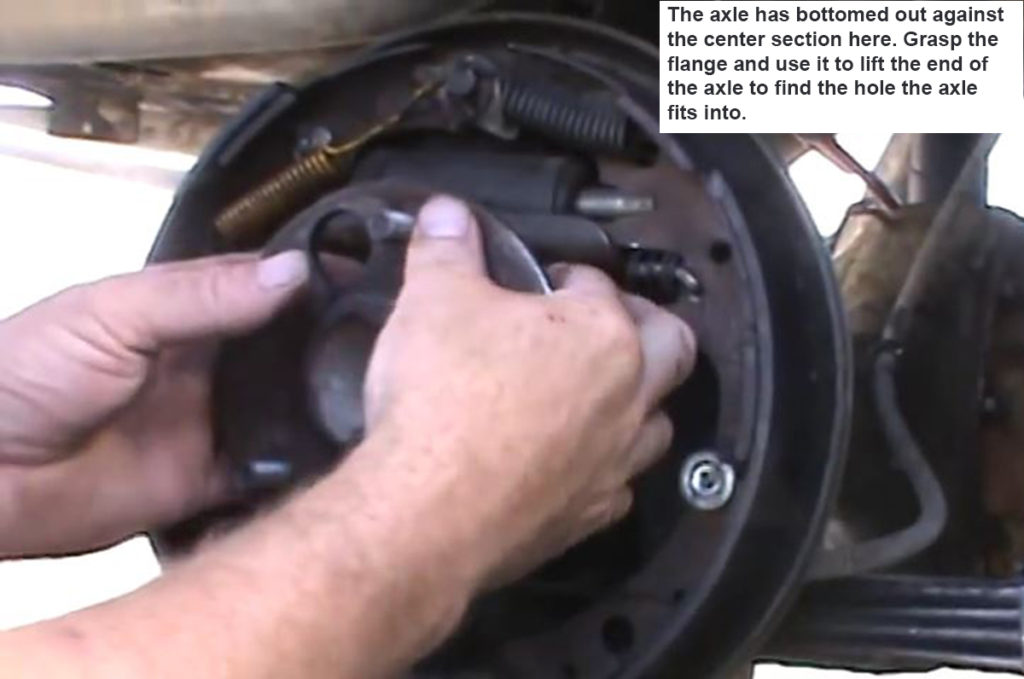 Carefully insert the end of the axle through the seal. Support the axle to minimize rubbing against the seal as you push it in. When the axle flange is somewhere between five and seven inches away from the backing plate, the axle will most likely stop going in. Rotate it a little to line the splines on the axle up with the splines on the carrier/center section while pushing. 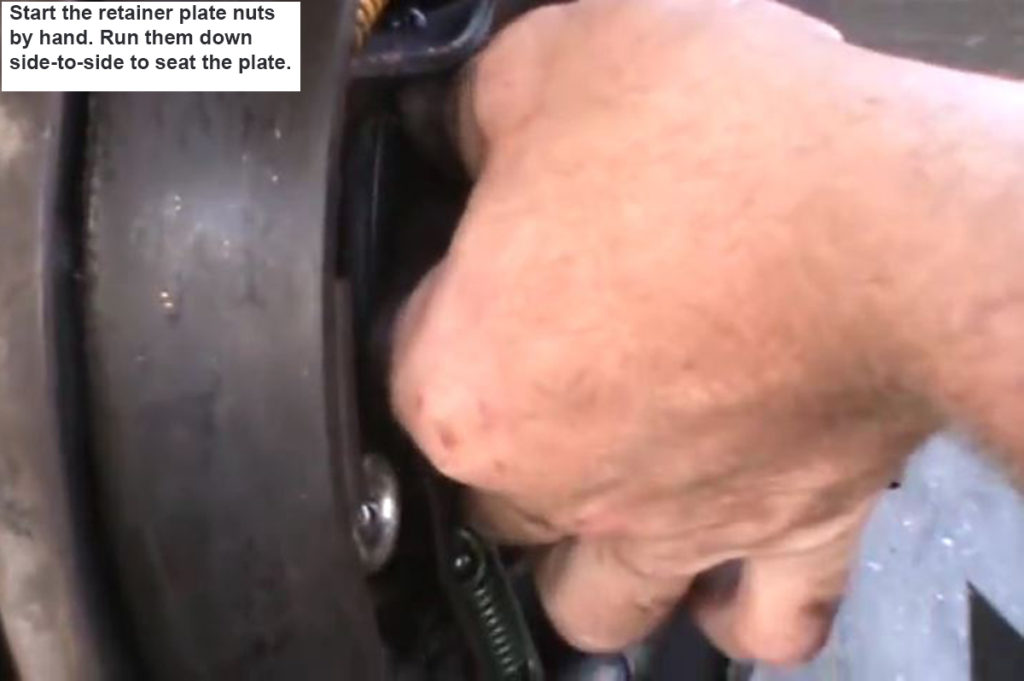 Settle the backing plate firmly against the axle housing flange. Rotate the retainer gasket and plate so the flat part faces up (this flat part is a cutout that allows the plate/axle to be removed without removing the brake shoes and hardware) and push them over the five bolts. Now finish seating the axle. The axle flange should be about three inches from the backing plate. You may need to tap the center of the axle flange with the hammer’s handle to help seat the axle in the center section. 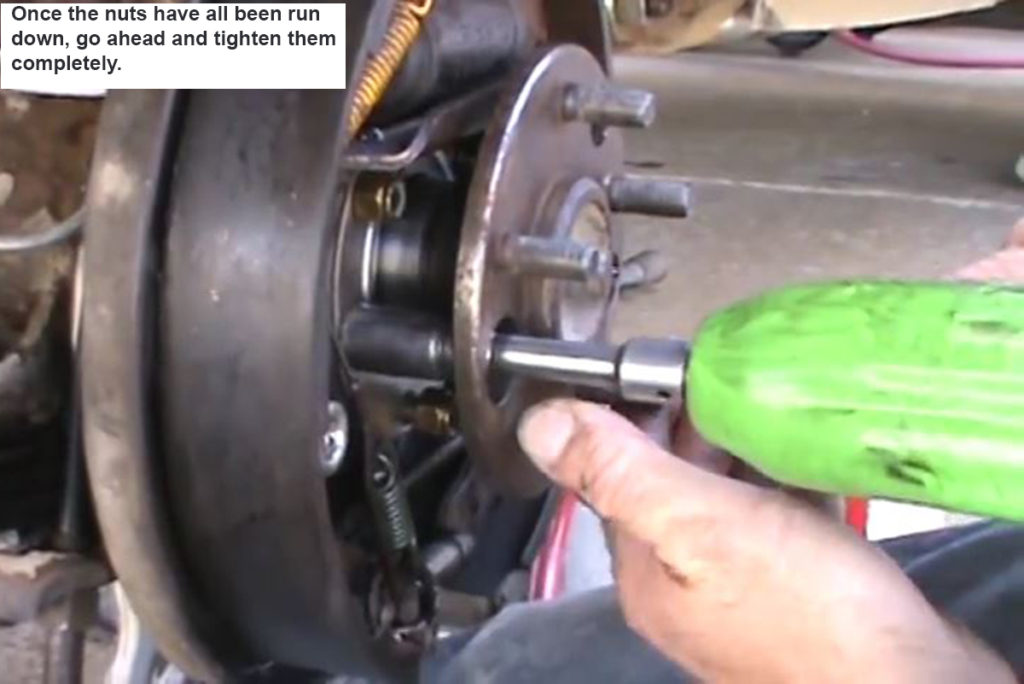 Chances are pretty good that a little gear oil dribbled out while you were doing this work. You need to make sure there is enough in order to not cause damage to your new axle or the differential. Grab a open end wrench (NO! NOT an adjustable wrench!), slide under the car, and locate the fluid fill plug. It’ll be either a 5/8-inch or 11/16-inch.

Use the wrench to remove it. Stick your little finger in the opening to the second knuckle. If it comes out with fluid on the tip, you’re good. If not, you’ll need to top off the gear oil. There are a number of different types of gear oil/differential fluid. You need to check either your owner’s manual or an applications chart to determine which one your differential uses. Using the wrong one can cause serious damage.

Rehang the Wheels and Lower the Car

Slide the brake drum over the studs until it rests against the axle flange. Line the studs up with the holes and hang the wheels. Thread on the lug nuts by hand and tighten them down with a ratchet or the lug wrench as much as you can.

Raise the car off the jack stands and pull the stands out. Slowly lower the car until the wheels are resting on the ground but the jack is still supporting the car. Use the lug wrench (or a torque wrench) to finish tightening the lug nuts. Finish lowering the car.

NOTE: Most axle manufacturers will tell you to take it easy on the new axles for a bit. This means: Don’t drive down to the local drag strip the day after finishing this project and try to rip the axles apart. By and large, you should put about 300-400 miles on the new axles to make sure they’re properly set and worked in before trying to set a new land speed record with them.

NOTE: Prior to doing that first high-speed pass at the track on your new axles, remove the wheels and drums and check for leaking seals.

Converted Your “A” Body to Rear Disc Brakes?

If, like me, you’ve upgraded to disc brakes out back on your older “A” body, the job of installing new axles in the rear end isn’t much different than with drum brakes. Instead of pulling the drum off, you need to remove the caliper and the rotor. When removing the caliper, be sure to remove it bracket and all.

The rotor might be secured to the axle flange with a screw or two, but most likely it’s a floating rotor. Simply slide it off over the studs. The axle flange may or may not have the hole(s) mentioned above. If not, you’ll need to use a box end wrench to remove the retainer plate plates instead of a socket.

NOTE: If you have upgraded to rear disc brakes, be sure to tell your sales counselor this when buying new axles. There are minor differences in the axle flanges. These differences are enough that you can’t use axles designed for drums with discs and vice versa.