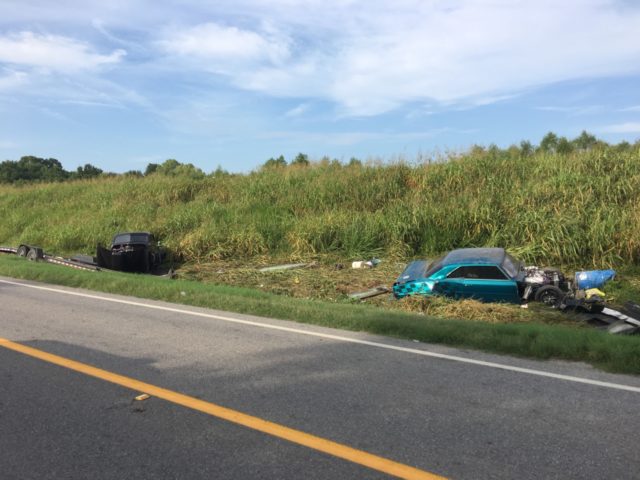 Many of you know Memphis Tennessee’s JJ DaBoss as the loud outspoken street racer from Discovery’s hit series Street Outlaws. To get an idea JJ DaBoss’ personality, in December of last year we featured a video from 1320 Video of JJ Da Boss participating in a street race with a $13,000 pot.

Last weekend, while heading to Arkansas after a late night an early morning of racing — a night in which his Precious Cooper-driven 1949 Chevrolet pickup known as “Ole Heavy” suffered engine damage — JJ briefly fell asleep at the wheel of his GMC Sierra pickup, hauling both “Ole Heavy” and “Heifer”, his 1966 Chevy II. The pickup struck a concrete culvert near Newport, Arkansas, at an estimated 55 mph. The impact caused the Chevy, loaded in the rear of the flatbed open trailer so that it could be quickly unloaded for engine repairs, to break free from its tie-down straps and slam into the rear of the Chevy II. Both racing machines ultimately ended up in the ditch, separated from the trailer and with parts strewn all along the roadway. – Dragzine

JJ escaped with minor injures including a broken hand and some cuts and bruises. We wish JJ DaBoss the best of luck with the rebuild of his machines and can’t wait to see what crazy thing he’ll say next.