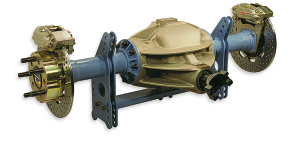 In past segments of our “Star Wars Axle Housing” series, we looked at how and why the fabricated housing first became available. We also looked at the construction techniques used in assembly along with some of the available configurations and options.  This time around, we’ll conclude the sheetmetal housing portion of the series with a look at details such as weight and optional equipment.  There are plenty of options available. And what is available might surprise you.

Custom-built rear end housings offer all sorts of options and fabricated housings are no different. The TRZ housing shown in the accompanying photos is equipped with a couple of options, including:

Tubular Back Brace: This brace prevents the ends of the housing from migrating forward and back. This is more common than you might think with a Ford (actually big heavy housings like a Dana 60 can also move around too, but that’s another story).  The back brace stops it.

Lower Control Arm Brace Tube:This brace ties both of the lower control arm mounts together and also ties the works together with the base of the center section case.  The idea here is to prevent the housing from bowing (up or down).  It also helps to distribute the loads from the lower trailing arms.

Stock Style Shock Absorber Brackets: In the case of a Fox Mustang, it’s pretty easy to convert to coil over springs, using the stock mounting locations.  To accomplish this though, the rear end has to be setup to accept a bracket for the shocks (which is available from TRZ).  Basically, it becomes a bolt in with multiple lower shock mounts.

Fair enough, but there are other options too:

If you have a GM A or G body, you can specify stock location coil spring perches. You also specify adjustable height spring perches. Typically, you’ll use a common 2.50-inch coil over spring for this application.  These coil over are available in a wide range of lengths and rates. The adjustable perch (or “jack) allows you to crank up the ride height as necessary, based upon your spring of choice.

Another option is a set of inboard coil over shock mounts.  These are used when the shocks have been moved inboard. Like the conventional shock mounts, the inboard mounts allow for multiple shock mounting points (up or down).

Finally, TRZ can brace the assembly diagonally between the housing tubes and the bottom brace.  This further fortifies the housing, particularly when you have massive amounts of steam under the hood.

What’s the difference in weight between a fabricated sheet metal housing and a braced 9-inch Ford?  Something like a typical fabricated chrome moly housing for a narrow Pro Stock application will tip the Toldeos at approximately 41 pounds.  Meanwhile, a fully reworked, similar dimension Ford 9-inch housing (with all of the surgery necessary to make it live) will weigh in at 46 or more pounds.  When comparing a full width, bolt in housing such as the TRZ piece shown here, expect similar saving (FYI, TRZ offers these housings in both lightweight chrome moly or mild steel).  Of course, this weight loss is effectively unsprung, which means the shock absorbers actually have less mass to control.  In turn, this can mean more performance gains than just a simple weight loss.  As you can see, the sheet metal housing wins from both the strength and weight perspective.

So how long does it take to build a housing?  Typically, a fabricated housing from a shop like TRZ requires at least a week of fabrication time.  Meanwhile, a conventionally braced Ford housing can absorb a considerable amount of shop time as well.  Not counting the search for a decent (non rusted, non-bent) core, then factoring in the time it takes to clean it, a chassis builder can spend anywhere from sixteen to twenty hours (or more) in the rework.  Obviously, the difference in shop time is reflected in the price.  Typically, shops charge in the range of $1600 to $1800 for a completely braced Ford housing.  A fabricated sheetmetal housing from TRZ begins at $1465 (chrome moly) and with options as shown, it tops out at approximately $1800. Basically, the same as a heavily braced, stock Ford.  In our books, that’s a bargain.

Aside from the space age looks and lightweight, a sheet metal housing will invariably feature tubes, which cannot be twisted out of the housing.  They’re straighter than even the best modified housing and finally, the housings are significantly stronger than a modified FoMoCo housing. “Star Wars housings”?  Maybe not, but if you want the trickest, slickest axle housing available for your racecar, this is the hardware for you!

But we’re not quite done yet.  There is one more (extremely cool) rear end configuration out there, and that’s a “modular” housing.  Next issue, we’ll take a closer look at both the aluminum and aluminum/steel composite housings available in today’s marketplace.  Watch for it!