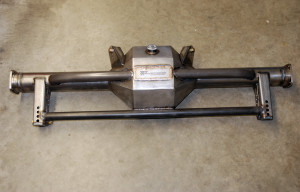 In the first part of this series, we began our look at custom-built Ford housings. If you recall, we pointed out some of the pitfalls of the OEM Ford, along with the steps necessary to correct them.  If you’re keeping track, you’ll find that fixing the Ford isn’t exactly inexpensive.  The costs for fortifying a stock housing can start to add up.  Before long, you might be close to the cost of a completely fabricated housing.  And with that “Star Wars” axle housing, you’ll gain strength and actually shed weight (losing unsprung weight in a race car is nothing to sneeze at either).  This time around, we’ll look at the basics of a custom fabricated rear axle housing. You might be surprised at the thought and the technology that goes into one of these pieces.

How Are Fabricated Housings Built?

How is a typical fabricated housing constructed?  Using the TRZ housing shown in the accompany photos as an example, each housing is constructed on a purpose-built, machine ground surface plate.  This keeps the housing dimensionally true during fabrication (under construction, the housing is indexed to the fixture which orients the case to the bearing centers).  The axle tubes (which are 3.250-inch diameter, .250-inch wall 4130 chrome moly steel) run inboard and attach to an inner bulkhead inside the housing center.  The face plate and backing plate are laser cut from 4130 chrome moly steel plate, and are designed to support the folded chrome moly sheet metal case and brace assembly.  For this application (Fox Mustang), a set of three-position upper trailing arm brackets are welded to the case and also tie into the axle bulkhead.  Outboard, TRZ adds a set of six-position lower trailing arm mounts.  The backside of the trailing arm mounts double as shock mounts (we’ll get into this later).  TRZ points out that their fabricated housing is available in a variety of configurations for Mustangs, GM A Bodies and GM G Bodies.  They can also be equipped with a large number of options (more later). All gasket surfaces are machined and the housing is aligned after all welding is complete — again using the index fixture to ensure that the housing is true.  Finally, the housing bearing ends are installed using a special, dimensionally accurate fixture.

As you can see in the photos, the welds are all accomplished by way of the proven heli-arc process.   The axle tubes are firmly planted in the center section and are not only welded around the circumference of the tube — they are also welded horizontally to the center section.  In the end, no short cuts are taken.  Included in the housing package is a set of unique internal gussets.  As shown in the photos, the gussets are triangulated and prevent the center section from moving fore and aft.  As mentioned previously, the hypoid action of every ring and pinion (Ford or otherwise) will always try to force the ring gear out the back of the housing or carrier.  The more power available and the better the traction, the more aggressive the fore-aft action.  With the gussets in place, this fore-aft movement isn’t possible.  The result is more power to the ground and significantly improved ring gear life.

Another factor influencing gear life is the shape of the housing internals.  By carefully laying out the design, TRZ has been able to limit the amount of oil drain back away from the ring and pinion.  Why is this needed?  Simple.  At race speeds (say 9,000 RPM), there simply isn’t any rear axle lube on the ring gear in a stock rear axle assembly.  The design of the fabricated housing is conducive to maintaining lubricant on the ring and pinion assembly.

Watch for the next segment. We’ll dig deeper into fabricated housings and housing options.