Behold, the 1950 B-Series Dodge Race-Truck. Such a painfully obvious choice for road-racing, it actually hurts. 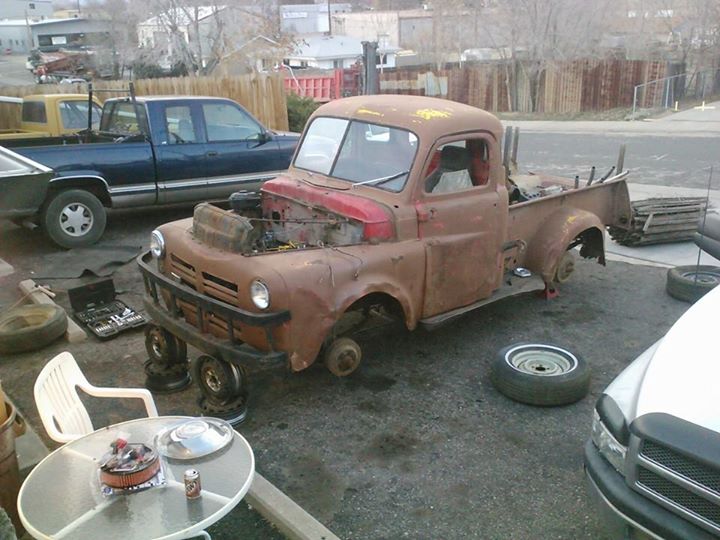 These “New for 1948” postwar designs are affectionately known as “PilotHouse” pickups and had a production run of 6 years. Straight axles, stepsides and wooden bed floors were still the norm, and these models even came with such modern niceties as roll up windows and cowl ventilators.

With a non synchro 3 or 4 speed “granny low” manual transmission stirring 97HP and 218 cubic inches worth of straight-6 flathead-induced fury, its pre-WWII era mechanicals harken back to a much simpler, focused and utilitarian way of life. 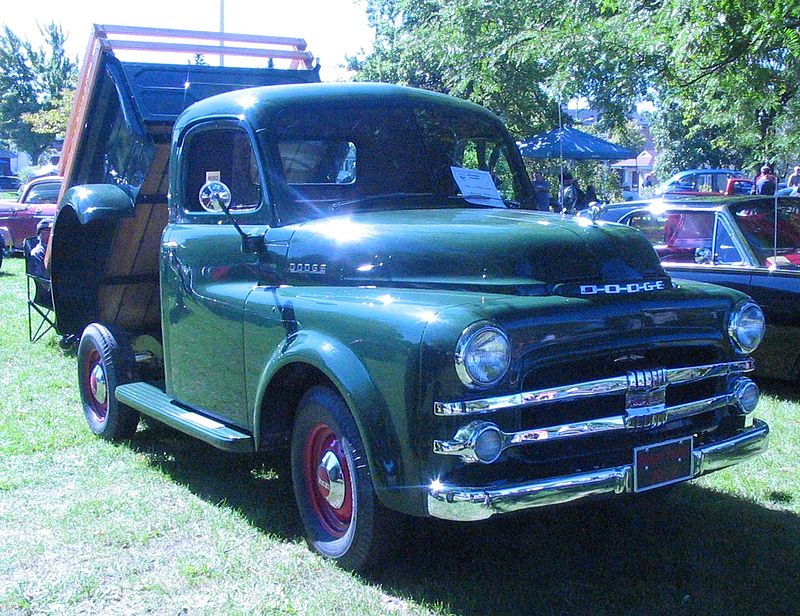 And the smart racer knows that simple ALWAYS equals reliable in endurance racing, so in theory this old Dodge should have a near-cockroach level of indestructibility – making it the obvious choice to chase winning nickels at the 24 Hours of LeMons. Or, it may piss everyone off by showering the track with a bath of hot oil and reciprocating-parts soup on its first lap, a protest after being rudely awakened from a decades long nap.

There was really was only one way to find out…“Grab that hooptie and race that mofo!!”

This is exactly what the impossibly optimistic and Colorado based “Grumpy-Cat Racing” team decided to do. Someone took a look at this rusty old truck sitting in the yard and said “Hell, let’s race this.”

There are generally two ways of going about fielding a hopelessly odd vehicle in LeMons. The slightly more ambitious but less gutsy approach is to take all the sheet metal or outer shell of your pig and drape it over a purpose built race gear, plop it on top of Cheatyiata subframes or stuff it full of BMWhothehellcares.

The secret, lazy yet pure “Essence-de-LeMons” approach is to vacuum most the dead rats out of your hooptie of choice, and stand around swilling beer and pointing at things until it’s almost too late, then panic and disappear into the carport for two weeks, cussing, bleeding and trying to pinpoint who is to blame if the car does not make it to the starting line. 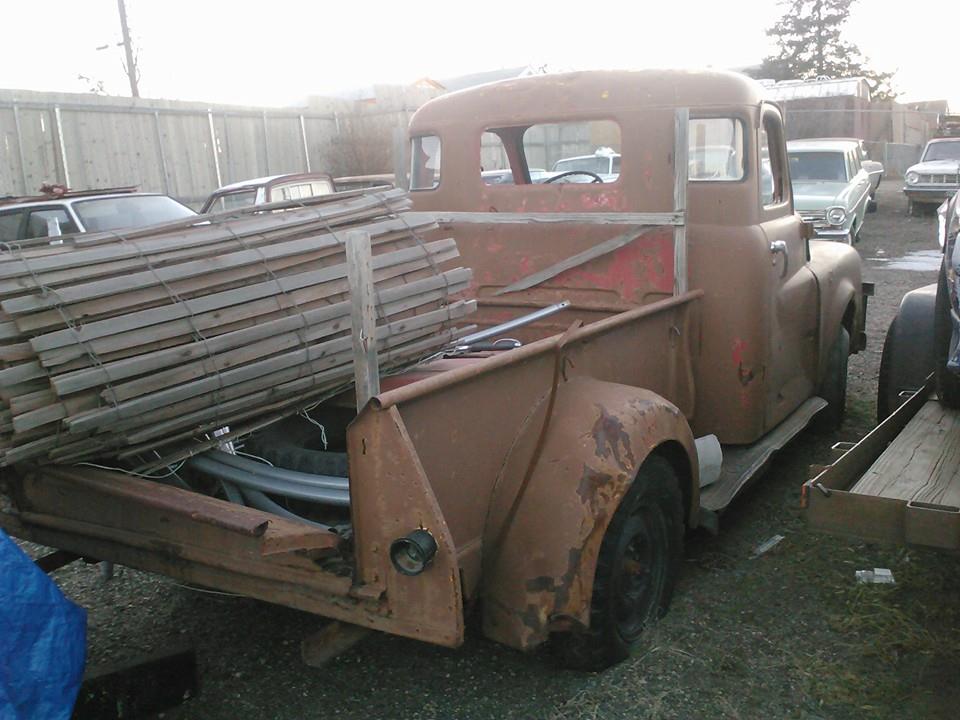 Luckily for us, Team Grumpy-Cats chose the beer swilling route and this Dodge retains nearly all the LeMony goodness that the Dodge Brothers could muster 64 years ago, and makes this race series such an awesome (bad) idea.

Alas, when they actually started looking at it, the stock front straight-axle was badly bent, damaged and worn to the point that they began to wonder if the bailing-wire mount someone used to attach the front spring to the frame (in lieu of an actual spring hanger) would hold up to the “massive” lateral forces they hoped to experience while cornering while under nearly constant full throttle.

In a moment of clarity, it was decided they “ought to do something about that” and began searching for a suitable replacement. Instead, they found the front end of a Jaguar XJ6 and deemed that good enough. At the other end they found a 8.8 inch rear end from an Explorer. With the crack of another beer the next thing you know this old Pilothouse pickup was a roller!

Suddenly there were just a couple weeks before the big race, and as all good LeMons teams do they decided it was time to start making the beast stop, go and probably turn. After plugging a couple leaks the ancient engine fired to life and showed a steady 20lbs of oil pressure. It didn’t even seem to smoke.

Alas, the chief instigator found himself abandoned by his teammates and it started looking hopeless. That’s when some of our favorite teams from the LeMons forum stepped up to help out in a last minute thrash, (Yeay Speedholes and Rocket Surgery!) After adding details such as pedals, mirrors, floors and a roll cage they emptied all the junk out of the bed and went racing!! “Return of the LeMonites or Bust!!”

Amazingly, the tough old Dodge turned lap after lap in C-class all weekend long for its debut at Miller Motorsports Raceway in Utah, and served as the proverbial “Jam-Car”, turning in a 2:34 best lap vs 1:57 for the fastest A-class looser. On the longest straights it reached a nearly blistering 60mph at full song. Fantastic. 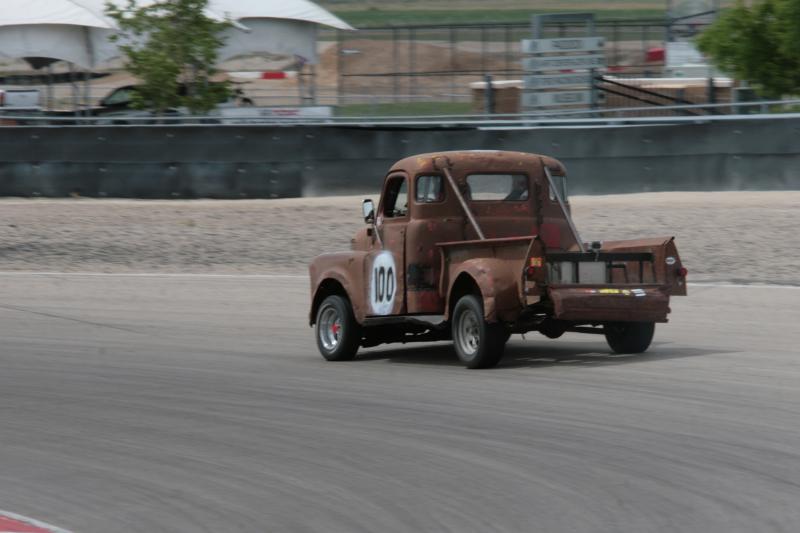 At one point this 1950 Dodge was even bestowed with the honor of bringing back the infamous “Highway 17” penalty, where bad drivers were required to follow a slow moving VW Hippy Bus as an agonizing “time out”. The iconic orange van met its demise in Reno, 2009, however this old truck made a great successor in spirit.

And the funniest part of the penalty was that the driver of the Dodge had NO idea why the T-GT, normally one of the fastest cars on any track, was suddenly stuck behind and stalking him.

For all their awesomeness and hard work, team Grumpy-Cat took home the top prize in the 24 Hours of LeMons, the coveted Index of Effluency (I.O.E) trophy and the biggest cash prize.

Of all the ways to use an old work truck, if the Dodge Brothers were still around it’s not hard to imagine they’d be mighty proud.

To read the rest of the Return of the Lemonites coverage, go HERE.