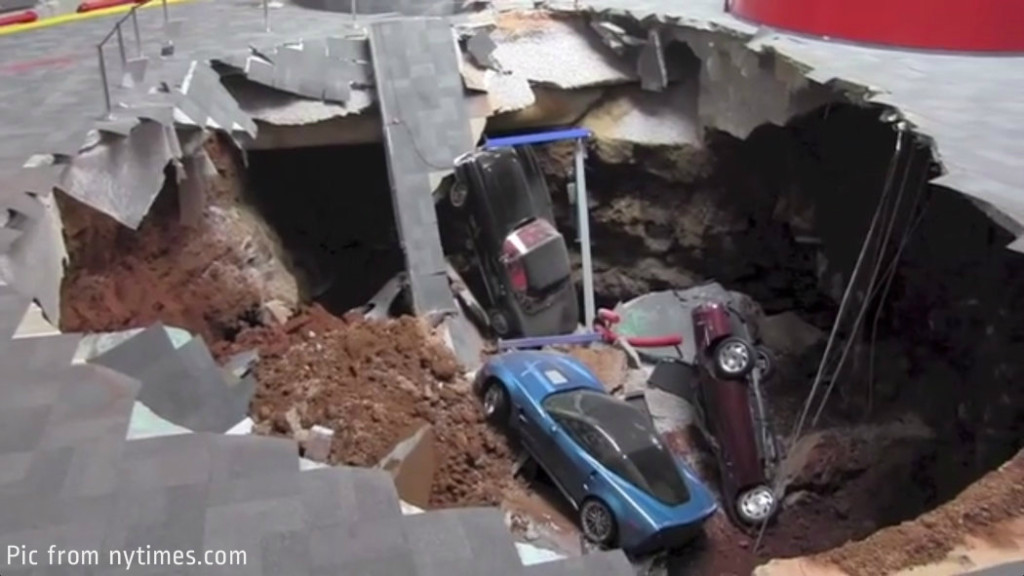 In case you haven’t heard the news, a massive sinkhole beneath the National Corvette Museum swallowed eight precious cars. Yes, although it sounds like something from a science-fiction movie,  the ground beneath the structure opened wide and gobbled up some priceless ‘Vettes, like a 1993 ZR-1 Spyder and a 2009 ZR1 “Blue Devil” both on loan from General Motors along with a 1984 PPG Pace Car, a 1992 White 1 Millionth Corvette, a 1993 Ruby Red 40th Anniversary Corvette, a 2001 Mallett Hammer Z06 Corvette, one 2009 White 1.5 Millionth Corvette and a black 1962 Corvette. Thankfully the only 1983 Corvette in existence escaped the untimely demise by a precious few feet.

As with most unfortunate events, all of this carnage came out of nowhere and it blindsided the community. Which reminds me, is your classic ride or modern muscle car properly insured? In the wake of this disaster I thought it only appropriate that I discuss a topic I’d initially saved for another day: Insuring your hot rod.

For the sake of brevity I’ll refer to all classic cars, no matter their genre, as a hot rod since in a sense, every classic car can be our “hot rod,” no matter how slow, stock or unhot-rod like they might be– a little convoluted, yes, but a column only has so much space. But I digress.

Sure, we all (I hope) have insurance on our hot rods and modern muscle cars, but do you have the right insurance? Will your insurance cover all of your aftermarket modifications? Will they give you fair market value? Will they pay what you have in it or what you feel it’s worth? If you’re going with traditional auto insurance, the answer to most of these questions is, no. Instead, speciality auto/collector insurance might be a better fit for your, well, collector car.

According to the stats, less than half of the collector cars in the US are actually covered by collector insurance. That means these owners could be grossly underinsured.

This epidemic isn’t because collectors insurance is some new fad that most have never heard of. Quite the contrary, as such insurance has been available for over a decade. Is it because people are just comfortable with what they’ve always used? No matter the reason, my hope is that more enthusiasts learn to utilize these special services because they can be a far better fit for your hot rod. Unlike a traditional insurance premium that might see your ’70 Camaro as just a 44 year old car with little value, a collectors insurance policy will recognize the mods you’ve made and the money you’ve spent, no matter if it’s a concours car, a drag car, a pro-touring rig or just a nice cruiser.  We’re talking coverage for what you feel the car is worth, liability insurance at shows and cruises, coverage during a resto or transport and mileage-adjustable premiums.

But before picking up the phone, please be sure to do your homework. For instance, some collectors insurance companies won’t insure modern muscle cars while others understand that market value for say, a clean Fox-body is far more than KBB value. In other words, just because you have a modern muscle car doesn’t mean you can’t get collector’s insurance–do your homework and call around. After all, I have my Fox-body insured for more than its blue book value because my policy takes into account all of my modifications and the market value for like cars. Which again brings me back to doing your homework: Know the differences between Stated Value, Actual Cash Value and Agreed Value, and don’t be afraid to run some hypothetical scenarios by your agent to see what they say, even if that scenario is a massive sinkhole gulping down your hot rod. In the event of a total-loss situation you’re going to want to know how your insurance deals with these three categories. Stated Value is just that, what you stated the car is worth, which can be helpful if your stated value is worth more than blue book, but in some instances the stated value ends up being less than the market value, thus cheating the owner. Actual Cash Value is your standard insurance process in which your car is worth whatever “the book,” states and nothing more. Lastly, Agreed Value guarantees you’ll get all of your money back in the event of a total loss. Like I said, do your homework before committing!

Speaking of committing, I want to add a bit about track or “closed course,” coverage. Remember that most insurance policy don’t cover your track outings, so in the event you enjoy running your hot rod on a closed course, check to make sure such activities are covered. If not, third party-insurance policies are available that allow owners to purchase “racing insurance,” for days at a time. Sure, it’s expensive, but it’s a lot cheaper than footing the bill for a total loss situation.

If you fall into the category that doesn’t have their classic ride or modern muscle car under a collectors insurance policy, do yourself a favor and look into it, I’d bet you’ll get more coverage and cheaper premiums. And for those that already have said insurance, pick up the phone and call your agent; ask them about their coverage terms, the protocol in the event of a total loss and run a few scenarios by them. However, in the wake of the Corvette fiasco you might want to skate around the sinkhole scenario, you know, just so you don’t jinx yourself or anything.

Until next month, keep up the progress on your winter projects and stay warm out there!

In case you missed the sinkhole; here’s the security footage. How’s that for crazy?