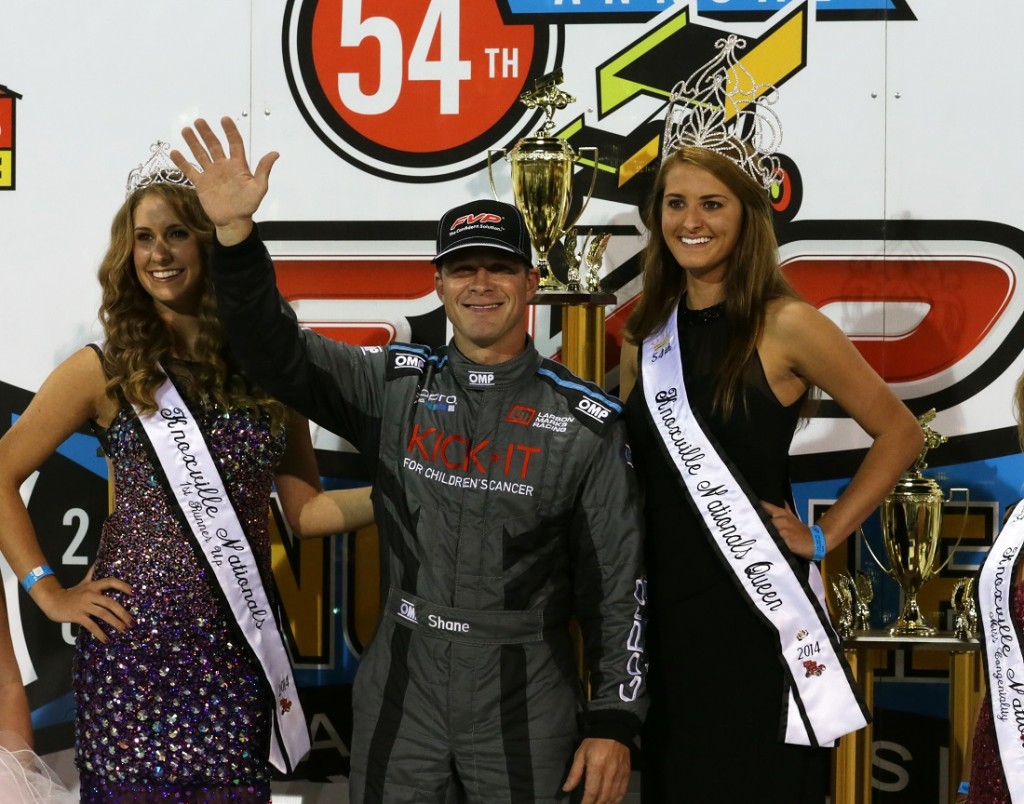 For Shane Stewart, racing is more marathon than sprint. The 38-year old winged sprint car driver from Tulsa, OK is having quite a year. He just came out of the Knoxville Nationals with a qualifying win in the RacingJunk.com qualifying event on Friday night of the Nats, then suffered a broken driveline towards the end of the finals during an epic third place battle, knocking him out of the competition.

The Burnout sat down with the talented driver to get a little background on his racing past and to find out what he’s got in store for the future.

Racing is part of Stewart’s DNA. His parents own a speed shop in Tulsa and his father raced quarter midgets, the same class that Shane started out racing at age 6 after watching his dad from the pits. After an accident at the track, though, Shane’s father turned his attention towards Shane’s career, and soon they jumped from quarter to micro midgets. Following successful campaigns in the midgets, a connection with family friend Andy Hillenburg got Shane into a winged sprint car, and while that transition was challenging, Shane rose to the occasion.

“I busted a bunch of stuff at first,” he said.  “The transition from what is basically a motorcycle engine in the quarter midget to something that made 800 horsepower wasn’t easy, and it certainly wasn’t  cheap on my dad, but I was never afraid to go fast. That made a big difference.”

He sat out a few weekends, letting his body and his car recovery from those learning experiences, but with every race, Shane continued to grow and to use what he’d learned to run better the next time.

“I ran locally around Tulsa in Andy’s car for a while, then moved up from there. Dad managed to get me my own car, and then in 2000 I got a chance to run with Junior Holbrook, which was the first professional opportunity.”  Stewart has been in the pros ever since. 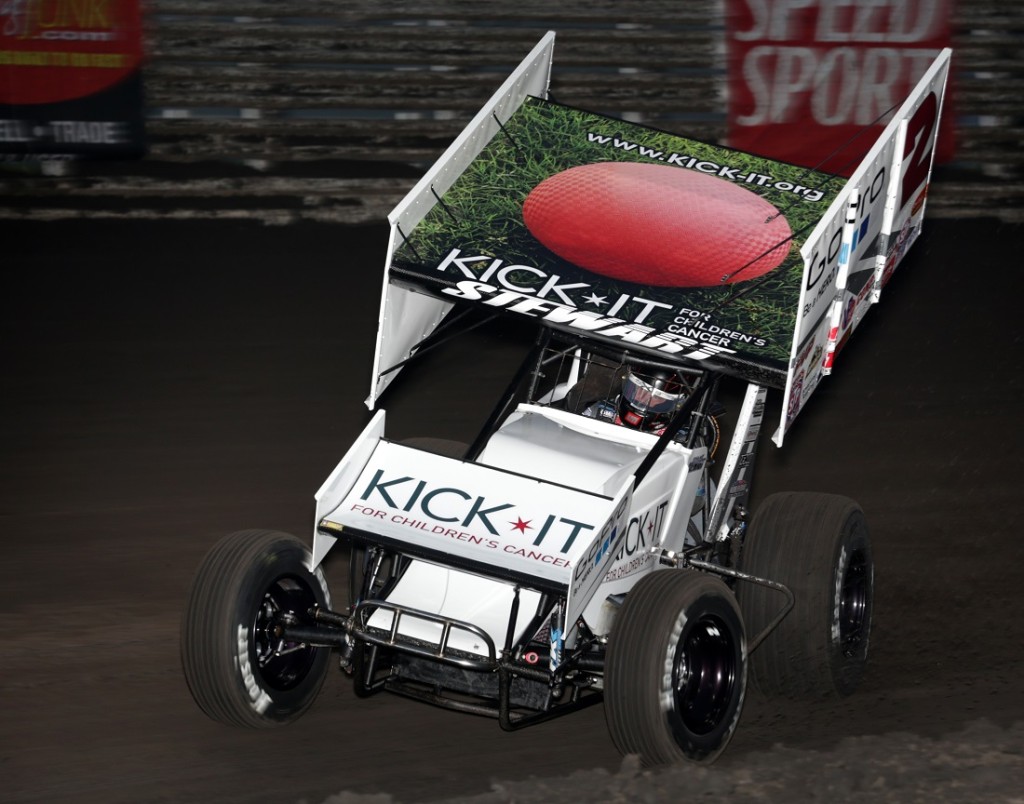 The appeal of the sprint car is something that many drivers feel but can’t always articulate. Not so with Stewart. “It’s the rawest kind of motorsports you can do – comparable to motocross,” he said thoughtfully. “The tracks change so much throughout the race, the grooves and ruts change and it can be unpredictable.  It’s the hardest type of racing I’ve ever done.  It’s just tough, and any time you have any type of success, it’s such a great feeling because it’s not easy.”

The challenge of the sport has both held his interest, and pushed him to improve. “It’s always intense,” he said. “The speed, the closeness with the other cars – drifting 100 mph with someone a few inches away from you. It’s a huge adrenaline rush. “

The sprint car season is long, an endurance sport in of itself, and the challenges of improving are myriad, as an athlete and a racer. Typically of Stewart, he focuses less on the track or the car than on his own performance. “Most sprint car guys don’t work out during the summer,” he explained. “We run 80-100 races from February to November.  You don’t have to be strong so much as have endurance.  You keep your heart rate up when you work out.  The job itself is training.  The biggest things I try to do are to keep hydrated and eat well on the road.” 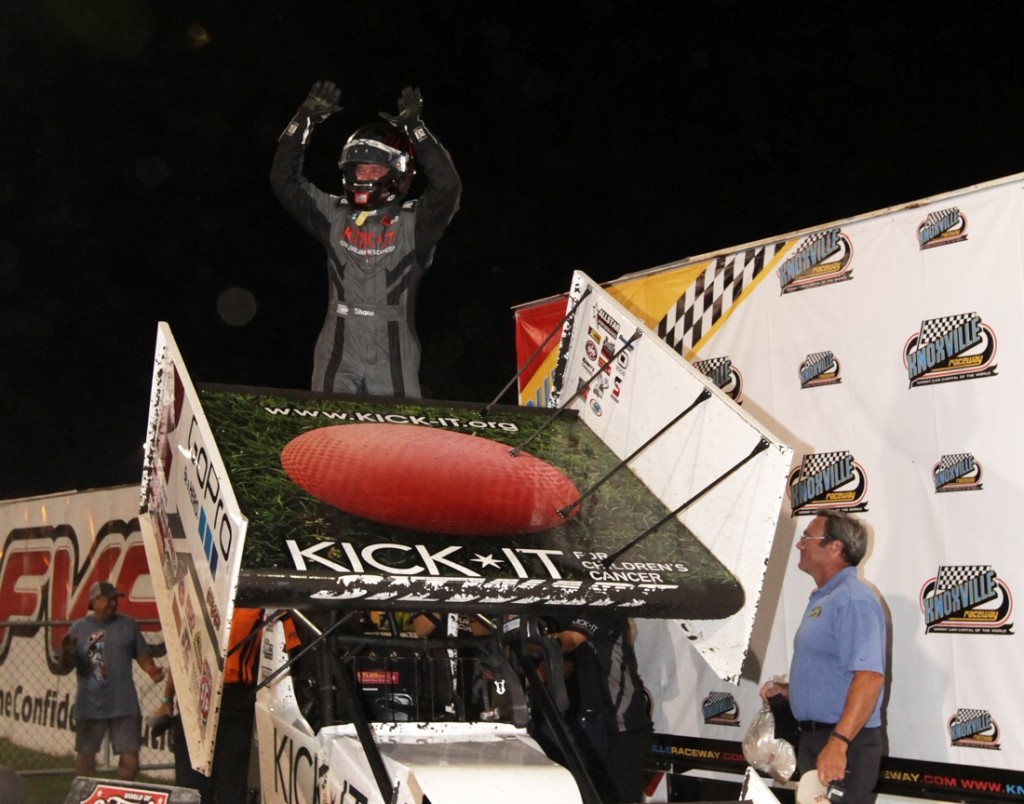 Learning the tracks over the years has been helpful, but it’s as much about understanding his own strengths and skills as knowing the landscape. “I’ve been fortunate to run at most of the tracks two or three times during my career.  But no matter where you run, it’s still a big round dirt track. There are so many similarities from track to track, and it’s more important that I focus on what I could have improved in the race. I keep a lot of mental notes. You learn something every night. You don’t stop learning, it’s constant. As the cars evolve – with shock programs, tires, everything, you have to keep up, keep learning.   I try to apply that training to outside of the racetrack as well.”

His favorite places to race are those tracks that feel like home, that inspire. “Knoxville is home,” he says. “I’ve had a lot of success there. It’s home to the Nationals which is the biggest event of the series.  But I’d like to win at Eldora, the history there is amazing. There and Williams Grove.  I also like Pevely (I55),  owned by Kenny Schrader. It’s a really small track, a quarter mile, with a  concrete wall all the way around,  and the way it’s banked, there is a lot of drifting and its fun for the fans.”

Stewart is always looking ahead, whether to that next lap, next race or next season.  “Larson Marks is a new team and the employees have a lot history in sprint car, but we need more time to work with each other,” he explains. “We’ve got big goals for next season. It’d be hard to win a World of Outlaw series (championship), but it’d be great.  Steve (Suchy, Stewart’s crew chief) and I have worked hard to limit the bad nights, and we’re hoping to go into next season with confidence in 2015.  It’d be crazy to say we’re going to compete for the championship next year, but the team could run top 5 in points. That’s not impossible.”

When Shane isn’t behind the wheel or managing his race team, he loves to play golf. “I’m not too good at it, but I love it. I play with my dad, and he beats me every time. He was a pro golfer before he raced.” Stewart is also a big fan of the outdoors and of water. 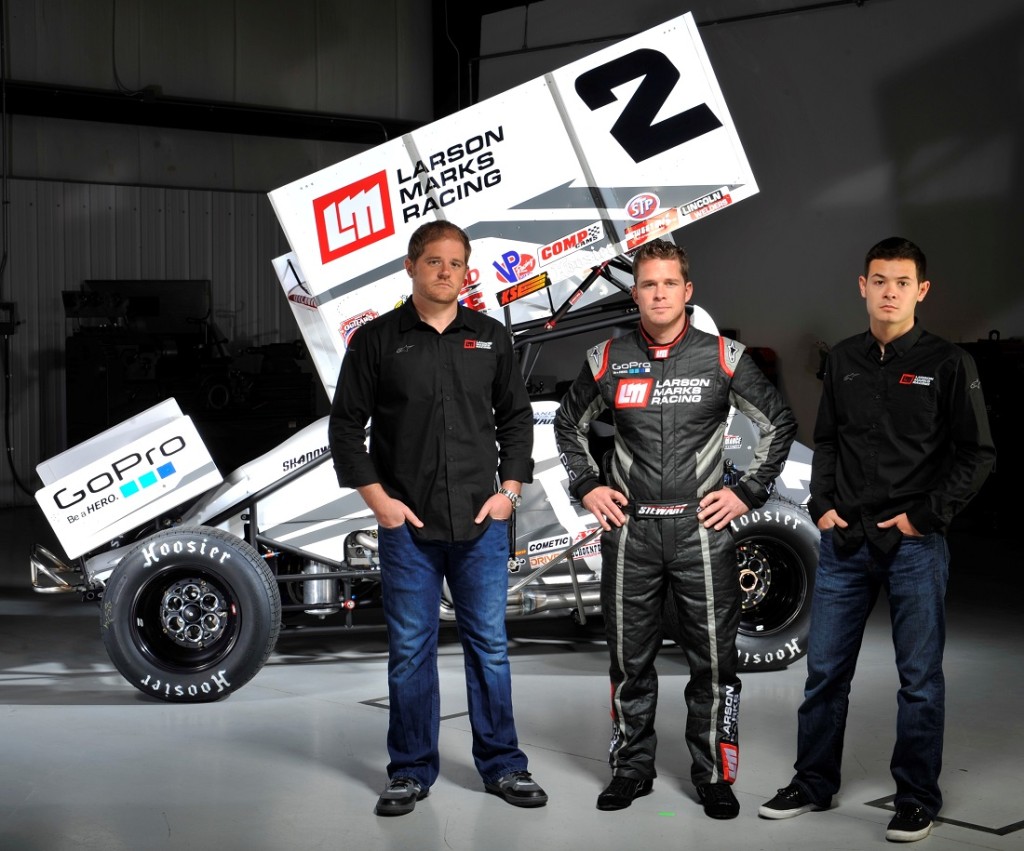 He has a few words of advice for those trying to make it in the world of pro racing. “The biggest thing I could tell young kids is that there are very few people who actually make it, so focus on perseverance. Forget about the bad nights.  Try not to live in the past, learn from your mistakes, and focus on the next race. Work at it, and once you get there, it’s still hard work. There’s always someone who might be better, have more money. You have to stay focused.”

Good advice from a racer who is living those words.

Check out Shane’s qualifying victory from the Knoxville Nationals RacingJunk.com Qualifying Night in the video below: