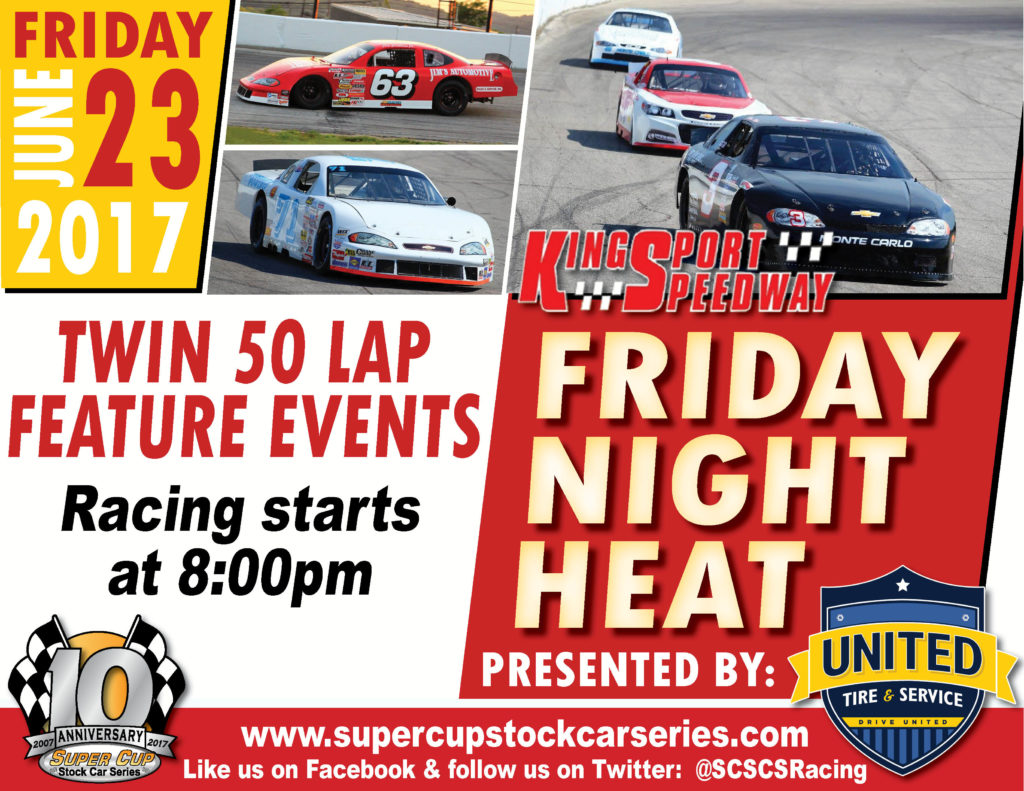 Next up in the Super Cup Stock Car Series is the Friday Night Heat Twin 50s, presented by United Tire, at Tenn.’s Kingsport Speedway. Few of the series’ competitors have driven on this 3/8-mile oval before, and not many more have experience piloting a full-bodied stock car over a concrete surface.

One of the fortunate few with experience is Mike Potter of Johnson City, Tenn., who drove at the Speedway only a few years ago. This veteran driver used to win races weekly back in the ’70s, and he’s also scored top 10 finishes in the NASCAR Late Model Sportsman National Championship, which came before the NASCAR Busch/Xfinity Series.

He’s not the only driver for Potter Racing this event, either; Jon Kerley (No. 99), Ben Ebeling (No. 44) and Brad Teague (No.12) will join him at the speedway. Teague is another veteran, also from Johnson City, who has prior experience at Kingsport; with 241 NASCAR Xfinity Series starts (from 1982 to 2015) and a win in ’87, he’s a force to be reckoned with.

The other drivers are mostly new to the track, and its 11-degree banking and ultra tight corners are sure to challenge their setup planning skills. They shouldn’t be counted out yet, though! Quite a number of them possess impressive track records from other speedways, such as Jim Crabtree Jr. of Muncie, Ind., currently the early season points leader. Alongside Crabtree, Larry Wilcox of Denver, N.C. will be the only other driver present with previous experience in a SCSCS race in Tenn.

SCSCS practice begins at 5:30 p.m. and qualifying takes place at 7:30 p.m.  The first of the Friday Night Heat Twin 50s presented by United Tire takes the green flag just after 8:00 p.m. An optional early practice session is held for all divisions competing on Friday from 2:00 to 4:30 p.m.

The Sopwith Motorsports Television Productions crew will be present to film the full Super Cup Stock Car Series season and produce nationally televised broadcasts, scheduled to appear on MAVTV at a later date.

For more information, visit www.supercupstockcarseries.com.  Interactive updates throughout race day will be available on the Super Cup Stock Car Series Facebook and Twitter.