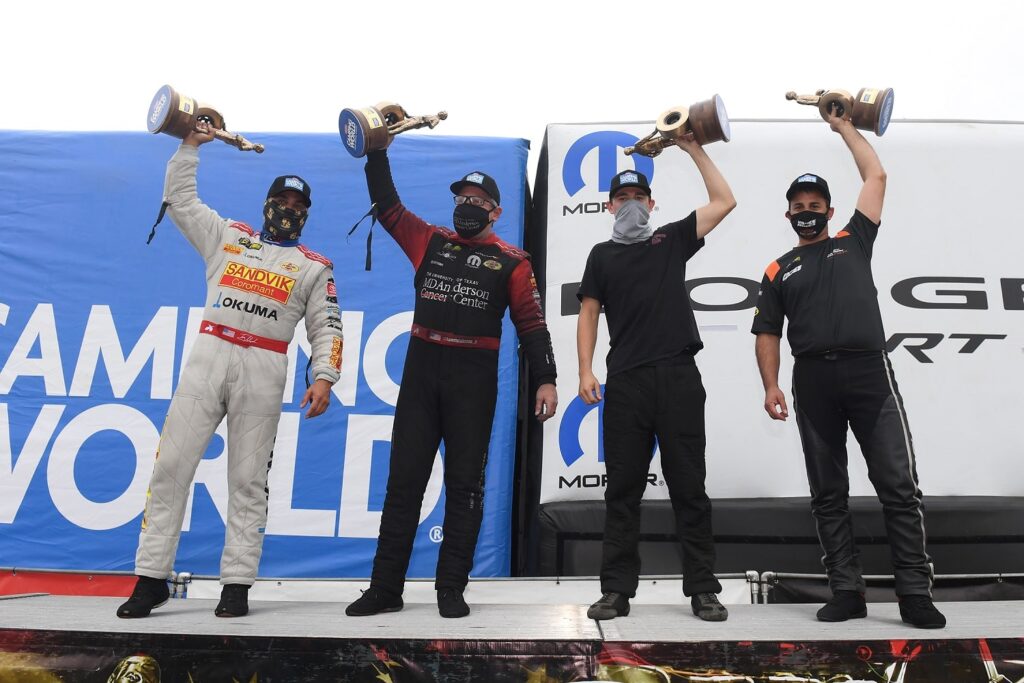 As the strangest NHRA season begins to come to an end, three underdog drivers would each earn one of the most dramatic victories of the year at this weekend’s Mopar Express Lane NHRA SpringNationals, at Houston Raceway Park. Despite being grounded for the better part of two seasons, due to a lack of sponsorship, the NHRA’s winningest Top Fuel driver clearly has not forgotten how to find the winner’s circle. In his eighth win of this season, Don Schumacher Racing’s own Tony Schumacher earned his 85th career win by driving his Okuma/Coromant Sandvik dragster past points leader Steve Torrence in Sunday’s final round. The underdogs at Don Schumacher Racing continued on their hot streak on Sunday when Funny Car driver Tommy Johnson Jr., who has been falling hopelessly behind teammates Matt Hagan and Jack Beckman in the points race this season, made a real comeback on Sunday after driving his MD Anderson Cancer Center Dodge to a victory over yet another teammate – Ron Capps in Sunday’s final round. In Sunday’s Pro Stock final round yet another unforeseen victory would be earned by a drag racing young gun that both won the race and the championship in the SAM Tech.edu Factory Stock Showdown and, for an encore, also bagged his first Pro Stock race when he topped seven time world champion Jeg Coughlin in the final round. 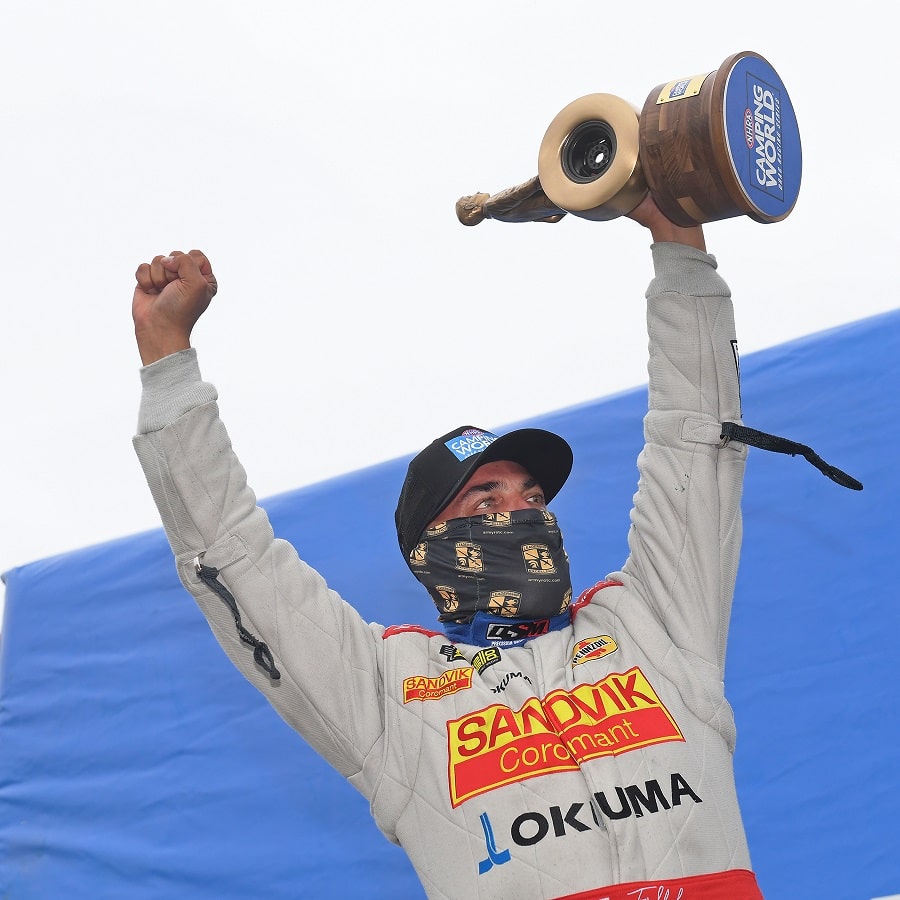 Although one of the top Don Schumacher Racing drivers would sit out the better part of two seasons while he searched for a sponsor, the sport’s winningest Top Fuel driver did not let that stop him from proving that he had what it took to earn one of the most impressive victories of the weekend. This underdog driver began the weekend from the No. 2 spot, his best qualifying effort of the season, and drove this to his 154th career final after taking down Cameron Ferre, Doug Foley, and Billy Torrence before moving on to take down the Top Fuel points leader Steve Torrence in Sunday’s final elimination round.

Knowing he would have to put forth a huge effort to take down the King of Top Fuel, Schumacher proved that this would not be as hard as it looks after pulling off a 3.669-second pass that held off the Capco driver’s 3.687-second effort in one of the quickest side-by-side races in the history of Top Fuel.

“This is an incredible opportunity, and I am going to display this trophy proudly,” said Schumacher. “I do not know what that pass came down to, but I am guessing inches and thousandths of a second and that is what good racing is all about and we have got one more to go in Vegas and I am looking forward to that.” 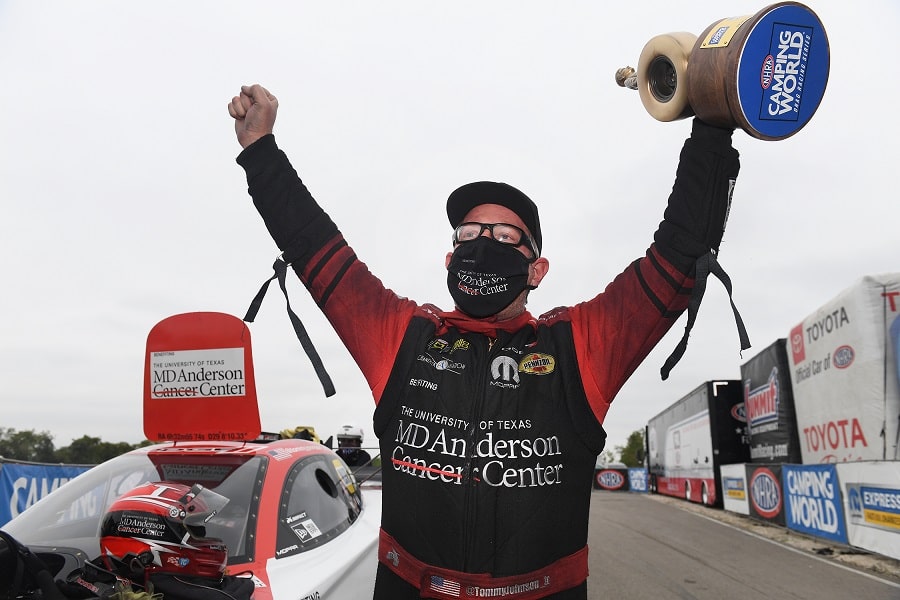 Don Schumacher Racing would continue its hot streak on Sunday in the Funny Car division. After opening Sunday’s final elimination round with a victory against Jim Campbell, MD Anderson Cancer Center Dodge driver Tommy Johnson Jr. followed this up with a close 3.934-second pass win over J.R. Todd’s DHL Toyota in the quarterfinals. Johnson’s biggest win, by far, came in the semifinals when he defeated Hagan’s Mopar/Pennzoil Dodge with a 3.941 to 3.981-second victory to reach the final for the 56th time in his long career.

After lining up alongside teammate Ron Capps in Sunday’s final elimination round, Johnson also began his climb back up the points ladder with a 3.929-second pass against Capps 3.952-second attempt. Thanks to this victory, Johnson moved to second place in the point standings behind yet another teammate, Matt Hagan, with only the Las Vegas event remaining next week.

“This was a must win race,” said Johnson. “It has been a weird year, but a good year for my team. We have gotten so close before and then we stumble, but I think that we are out of that now and we are ready for the heavyweight battle in Las Vegas.” 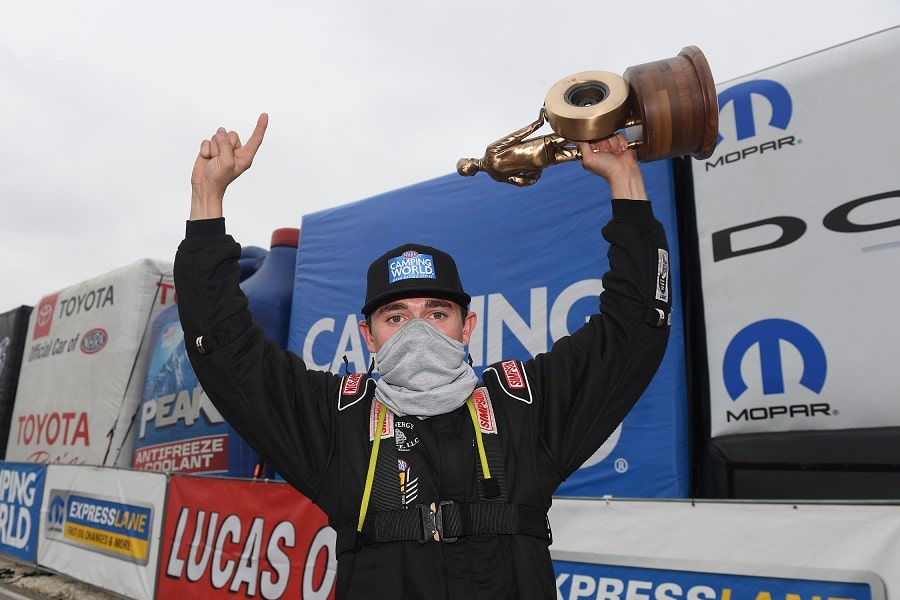 Although two veteran drivers would pull off victories in both the Top Fuel and Funny Car divisions, the Pro Stock final would give a young driver, that few thought had a chance at a final round victory, the opportunity to pull off a victory that is sure to be one of his most memorable.

After kicking off his weekend at the Mopar Express Lane NHRA SpringNationals with a victory and championship in the SAM Tech.edu Factory Stock Showdown, Aaron Stanfield began his march to victory in the Pro Stock division with a No. 4 qualifying spot and taking this to victories over Kenny Delco, Troy Coughlin Jr., and fellow rookie Kyle Koretsky to make it to the final for the second time in the last four events.

“This victory is hard to even put into words,” said Stanfield. “I dreamed of the day that I could hold up a Pro Stock Wally since I was a little kid watching my dad race, which is why I tried to stay as calm as I could in the race car. I knew my guys had my best interest in mind, so I stayed focused and we got the job done.”

The 2020 NHRA Camping World Drag Racing Series season will come to a final, yet what we are sure will be a dramatic end season at The Strip at Las Vegas Motor Speedway, this weekend. Stay tuned to RacingJunk.com as this unusual yet exciting NHRA season draws to a close.