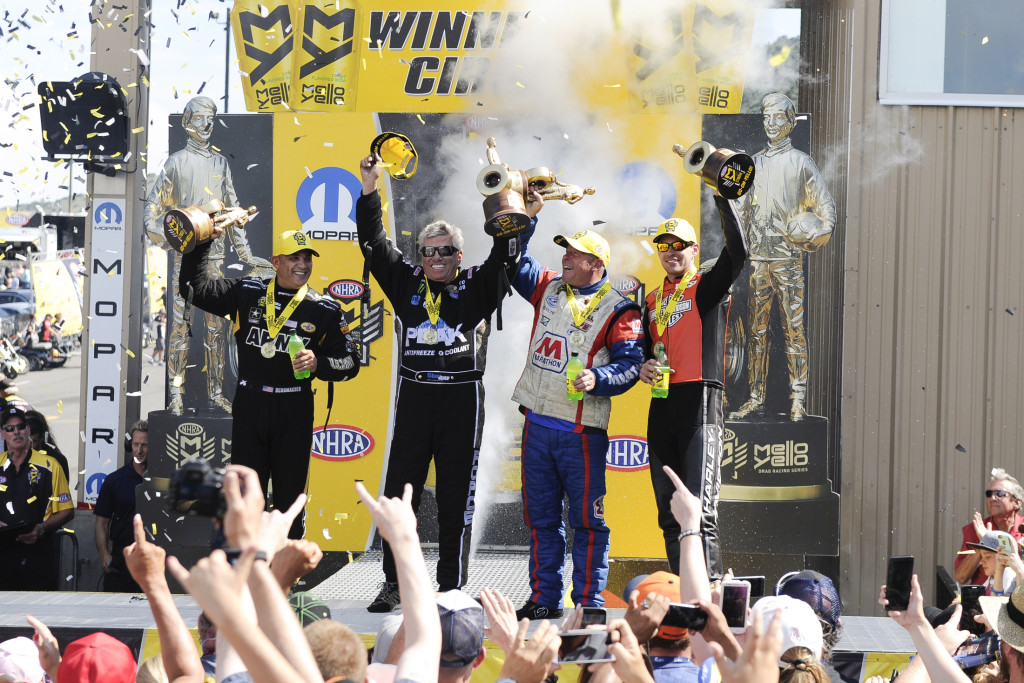 It might have been the return of the NHRA to national television on the FOX Network at the Mopar Mile-High Nationals, but you just knew in front of that big of an audience, the biggest names in the sport would step right up and that’s just what they did.

On Sunday, it was Top Fuel and Funny Car’s most prolific drivers that stole the headlines when Tony Schumacher returned the U.S. Army back to victory lane and a 67-year old John Force celebrated his 144th triumph to show the world that he’ll never stop racing as long as he sees the win light.

In the Mopar race, the Pro Stock reign of the dominating KB Racing Chevrolet teams ended with Allen Johnson reaching the final round for the 10th consecutive year at Bandimere Speedway taking his seventh win up on ‘The Mountain’. Andrew Hines showed his full hand lowering the boom against Harley-Davidson teammate, Eddie Krawiec in the finals taking his record-breaking 45th win in the class. 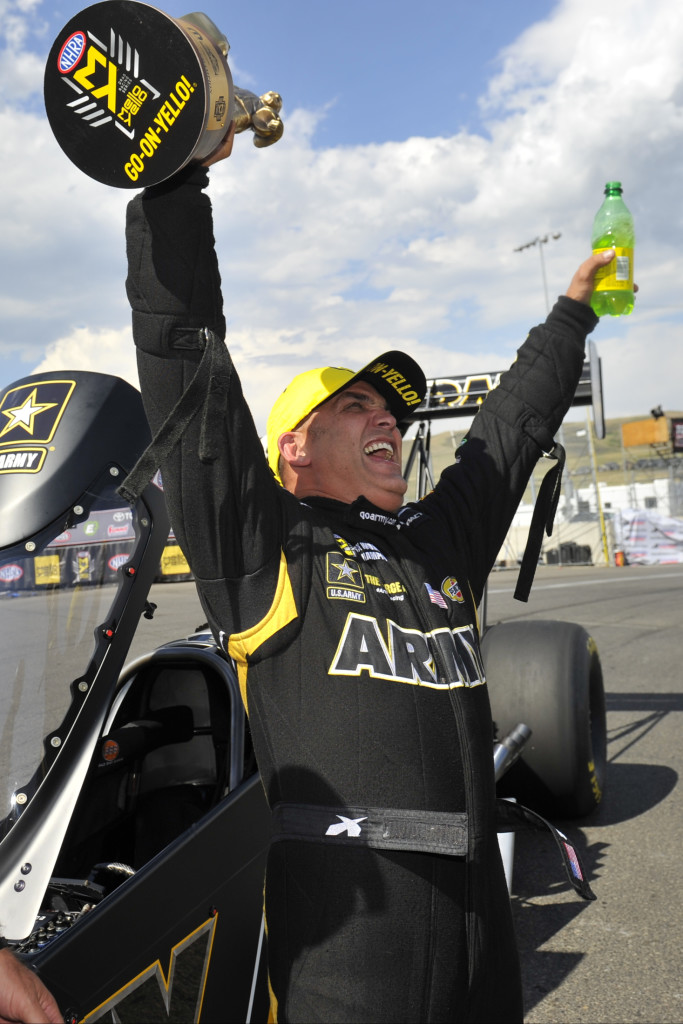 TOP FUEL
It’s really hard to believe the Don Schumacher Racing U.S. Army Top Fuel team hadn’t won a NHRA Top Fuel race in over a year. The eight-time champion, Tony Schumacher extended his own category record of 81 wins after defeating his teammate, Antron Brown in the finals while his team led by Mike Green was having to battle with the mile-high air and a track temperature of over 120 degrees. 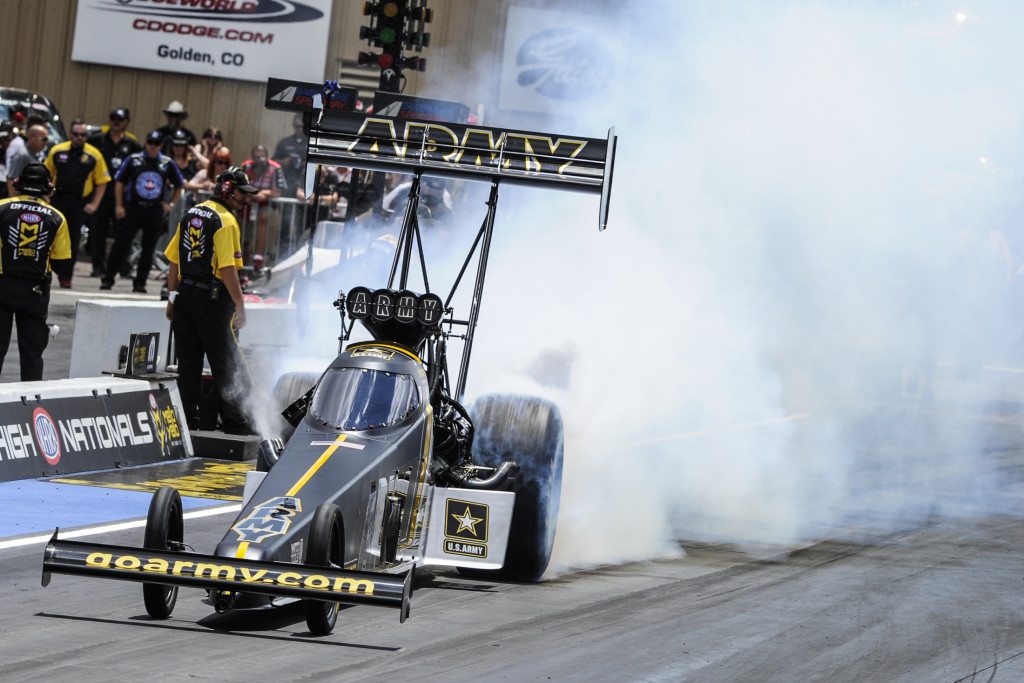 The win also earned Schumacher and the Army team the last of seven earned spots in the $100,000 Traxxas Nitro Shootout that is held within the U.S. Nationals over Labor Day Weekend near Indianapolis. An eight spot in the field will go to the winner of a fan vote and then lottery drawing.

“To win one of these trophies you have to beat some bad dudes, and we beat a bunch of them today from Doug Kalitta to Antron Brown,” said Schumacher, who outran Kalitta in round one, top qualifier Steve Torrence in the quarterfinals and Clay Millican in the semis to advance to the titan final round meeting with Brown. “I’ve enjoyed great moments in racing during my career, but coming back from a huge deficit when people have counted you out like we have done this weekend is the most satisfying to me.”
Schumacher’s final round produced a time of 3.802 seconds, 324.28 mph after Brown lost traction and coasted to the finish.
With the runner-up finish, his sixth final round of the season, Brown maintained the points lead, 57 over second place Kalitta. 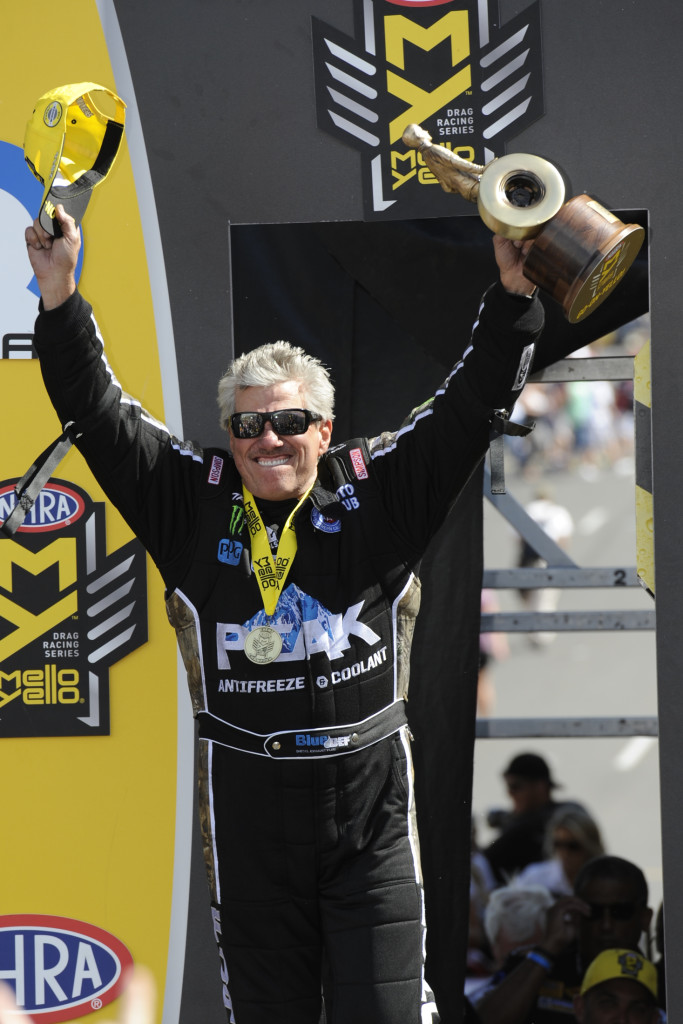 FUNNY CAR
John Force’s incredible career just keeps getting bigger and better as the years go by. Although he had to defeat his daughter, Courtney Force by a little hole shot to get to his 144th fuel coupe win will now continue his string of having at least one win for the last 29 seasons and it doesn’t appear he’s slowing down any time in the near future.
Force reacted first on Courtney (.038-.056) running a time 3.965 seconds, 319.45 mph to her slightly quicker pass of 3.963 seconds, 314.75 mph. 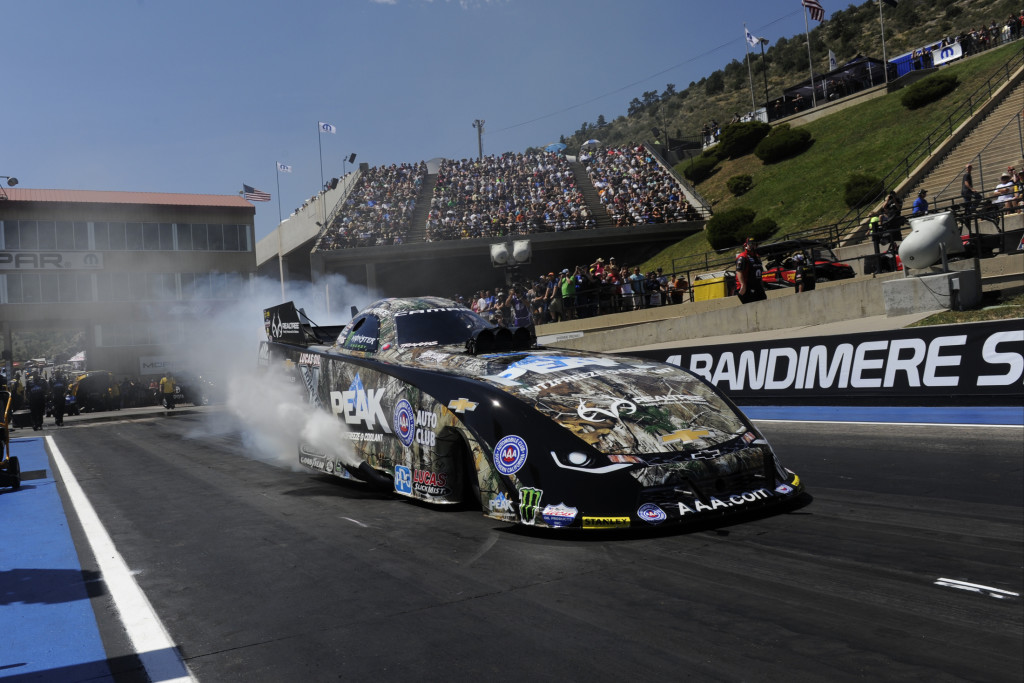 “It feels real good,” exclaimed Force. “I was runner-up here the past two years to (Jack) Beckman and Robert Hight. At the end of the day, I am young. I will fight this thing until I drop. We went and tested and Courtney (Force) was there helping me, Robert (Hight) was there helping me. We got through it, we came on this hill and we found a little bit of magic. If you go look at the whippings we have been taking from Schumacher (Racing) and Kalitta (Racing) all year then you would understand. Everyone on the team has been winning except me. I needed this real bad and I told Courtney, ‘Hey, you are my baby, I love you and I know you want to do good for Traxxas, but I am giving this everything I got.’”

Force marched through eliminations beating Jeff Diehl, Matt Hagan and Del Worsham to reach his 243rd final round. It was Force’s seventh win at Bandimere Speedway. “I just love racing,” said a beaming Force from the press box. “I was giggly with my kid and she was like, ‘What is wrong with you and why aren’t you serious?’ Because that is how I play the game. Everyone has their own deal, my deal is to try and find my heart, go up there, get my kid out of my mind, and I completely forgot I was racing her. I needed to get rid of that, because that will slow me down. I have won a lot of championships and I am going to win more races, and I am going to win some more championships. What I am saying is I know that father time is going to get me but I am stuck for five more years, but the point is this. I love doing it. I can still do this game. And that is why I love it.”
Courtney Force now moves around Jack Beckman for second, but still trails Ron Capps by 122 points in the Funny Car Mello Yello standings with four races before the Countdown starts in September. 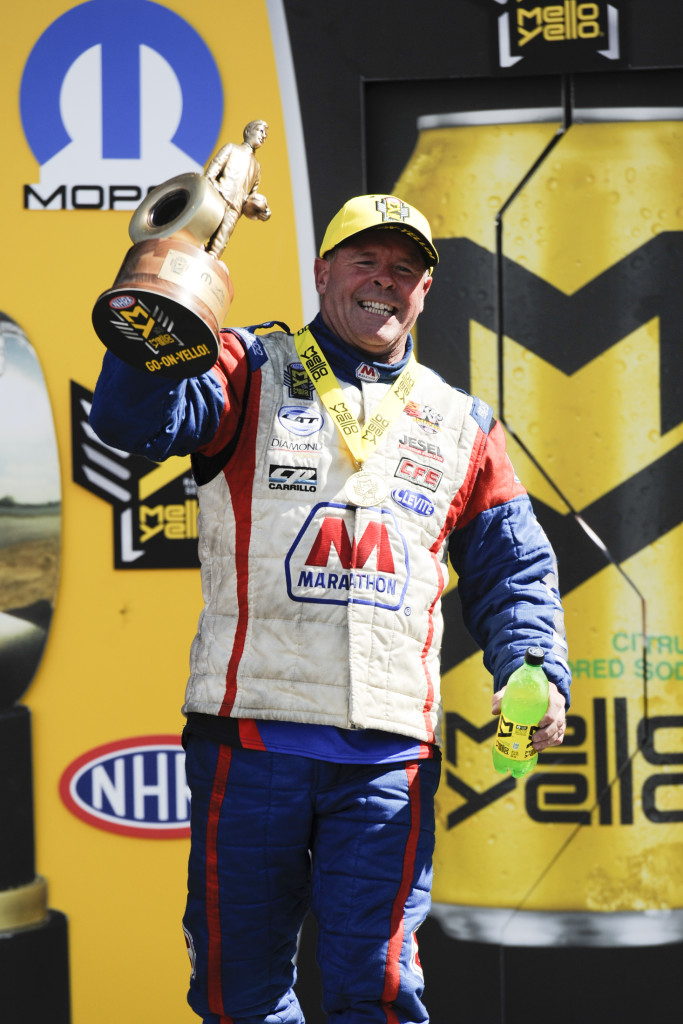 PRO STOCK
Pro Stock racer, Allen Johnson loves going to Denver and after reaching his 10th consecutive final round at Bandimere Speedway, he was near tears at the end of the track after being denied last year by Larry Morgan. It was Johnson’s seventh victory during that span all driving Mopar/Dodge automobiles and up on ‘The Mountain’ that’s a good thing seeing the race’s sponsor is Mopar. His last victory came at the season ending Pomona Finals last year and on Sunday; he collected his 27th Wally at Bandimere.

Johnson came from the bottom half of the lineup starting in the 10th position vanquishing Drew Skillman, defending champ, Erica Enders in the quarterfinals and in the semi-finals finally denied KB Racing their 14th consecutive final round beating Anderson on a hole shot. 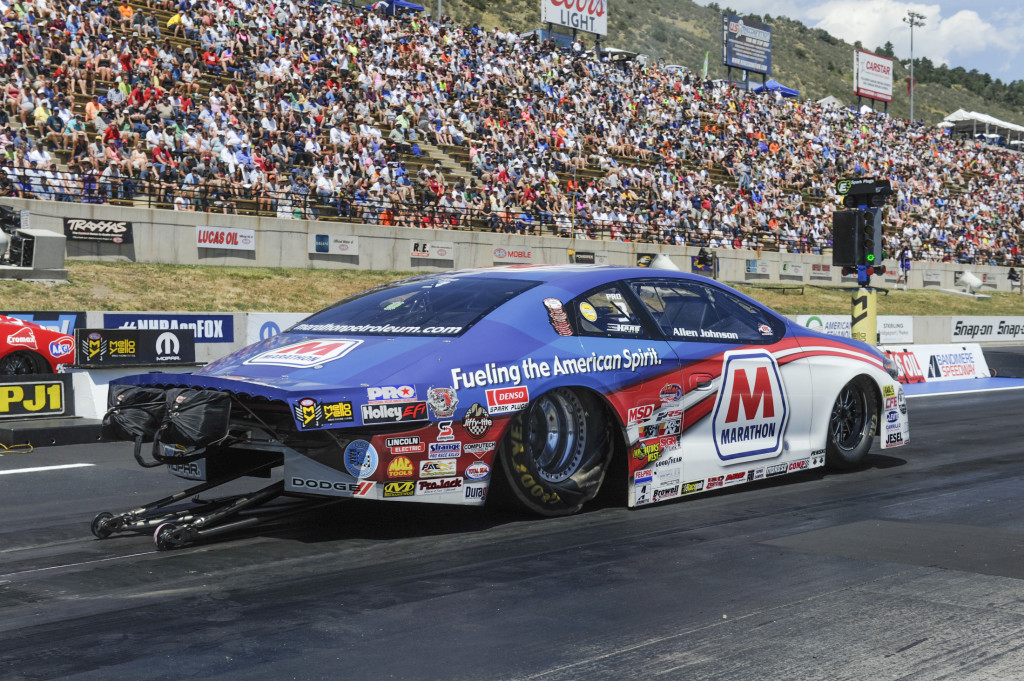 In the other lane for the Denver final round was No. 9 seed Vincent Nobile, his former teammate. The final marked the first time since the U.S. Nationals in 2008 in which two Pro Stock cars from the bottom half of the field made their way to the money round,

“In qualifying, we had a lot of bad luck,” said Johnson, who ran into a number of unusual issues, ranging from the very small to quite large including a billow of smoke from his car as it went down the track in the final round of qualifying. “I wouldn’t have given ourselves a one-percent chance to win this thing today. You know what, this team dug down deep, and we got a little better on every run. We just hung right in there, and maybe we had a break or two. The magic up here is just on our side for some reason. We’ve done it for Mopar all these years, and now we get to do it for Marathon, and Mopar is still with us so we’ve got dual partnerships there. It feels twice as good.”
Johnson has held steady in the No. 4 position in the Pro Stock points since the Topeka race earlier this year, and he inched closer to No. 3 man, Bo Butner with the win. He is now 70 marks out of third with four races to go before the Countdown to the Championship. 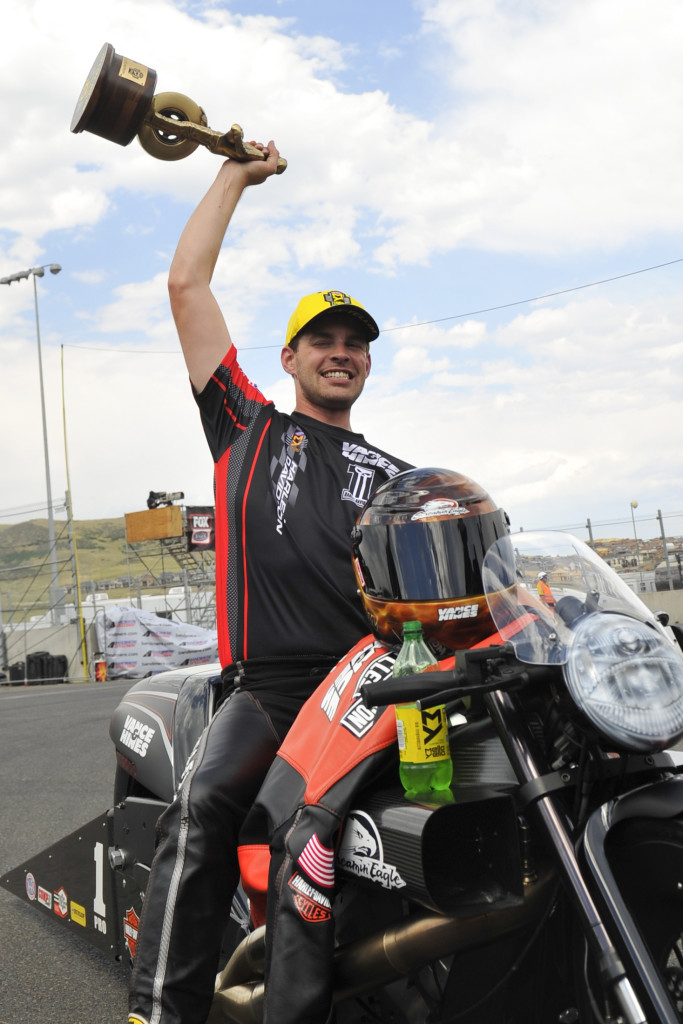 PRO STOCK MOTORCYCLE
Andrew Hines became the winningest Pro Stock Motorcycle rider in history, capturing his 45th career win by outrunning teammate Eddie Krawiec in the final round. Hines took his third win of the season and fourth at this event by posting a track-record time of 7.134 seconds at speed of 188.33 mph on his Vance & Hines Harley-Davidson to hold off Krawiec’s Harley, which trailed with a 7.148 at 187.21. 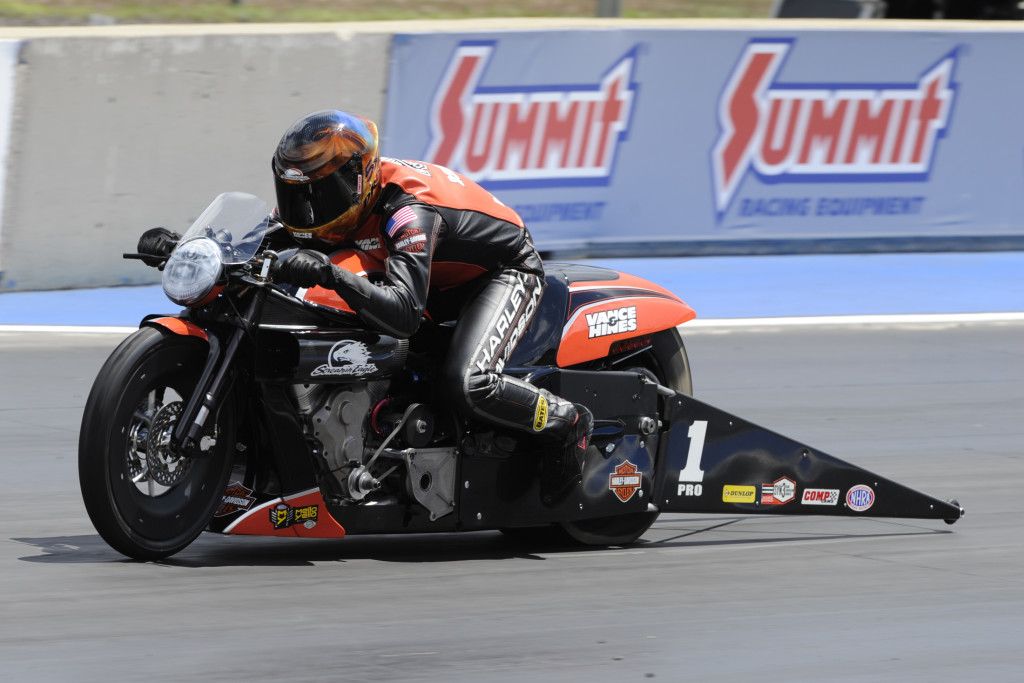 It was the third consecutive final round appearance for the five-time and defending world champion Hines, who defeated Scotty Pollacheck, Cory Reed and LE Tonglet to advance to the final.  “It doesn’t get much better racing up here in the mountain with the thin air requiring a different setup,” said Hines, who trimmed Krawiec’s points lead to 109. “Coming back to win on the mountain, it means a lot. My team has had my motorcycle really dialed in right now. It is our third final in a row and I am just riding the wave. I don’t think I’ve ever put eight runs like that together in a weekend. The bike is such a joy to ride right now.”

The NHRA Mello Yello Drag Racing Series continues with the second stop of the Western Swing, the Toyota NHRA Sonoma Nationals next weekend at Sonoma Raceway in Northern California.