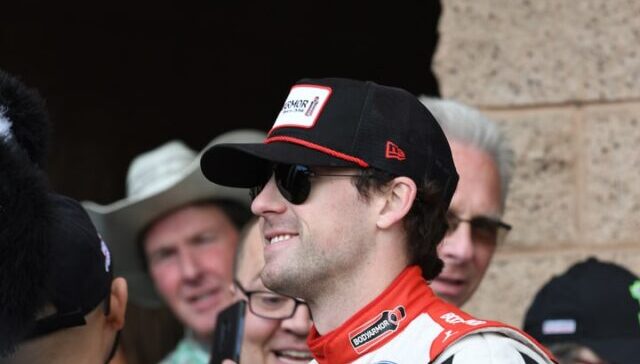 Ryan Blaney, racing for Team Penske in the No. 12 Ford, has secured an extension to his contract with the team for an unspecified multi-year period, Team Penske announced today. And why wouldn’t they keep the Ohio-born-and-bred third-generation racer on the squad? After all, Blaney is leading the NASCAR Cup Series championship standings after three races and has shown his ability to run up front and comport himself in the Penske Way when dealing with his team, the public and the media.

Blaney, 26, is the son of former NASCAR driver Dave Blaney; his grandfather Lou Blaney was a legend on the modified dirt track trails. He’s raced in the Cup Series for only two teams: Team Penske (2014), Wood Brothers Racing from 2015 through 2017 and is now back with Team Penske, apparently for a long stay.

Thus far in the 2020 NASCAR Cup Series season, Blaney has racked up a second-place result in the Daytona 500, 11th at Las Vegas and only 19th in Fontana, CA last weekend after a late-race pit stop ruined his front-of-the-pack run.

In announcing the contract extension so early in Blaney’s renewal year, team owner Roger Penske noted, “Ryan is a true talent with a long runway ahead of him. We are excited to have him as a part of the future of Team Penske. Since joining our team,” Penske added, “Ryan has developed into a championship-caliber driver and his personality and engagement with fans has made him a terrific ambassador for NASCAR. I am looking forward to even more success together.” 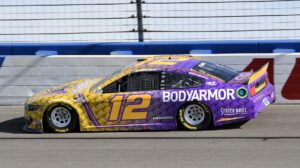 Blaney, arriving on pit road for Saturday qualifying at Auto Club 400 at Auto Club Speedway in Fontana, California, lingered as fans gathered to take pictures, talk with him and gain autographs. His PR rep pretty much had to drag him from the ropes. Not only does he activate with the fans, but as Penske noted, “Ryan has done a great job of working with our partners to support their activation and investment throughout each year.”

Coming into the Fanshield 500 race at Phoenix Raceway (thank goodness it’s back to its given name) this weekend, Blaney acknowledged he and Team Penske have been working on the new contract through the off-season. “I am really excited to continue with the Penske group for years to come. Mr Penske, I don’t know that I could ever thank him enough,” he said. “It is nice to continue with that whole team; I look forward to working with them for many years to come.”

One benefit of racing with Team Penske, as Australian Supercars DJR Team Penske champion Scott McLaughlin has discovered, is being able to test and/or race any car in Team Penske’s stable. When asked if he might have an interest in trying an open-wheel car, an arena his uncle Dale excelled in (he has 11 World of Outlaws victories), Blaney said he’d love to try it out. “If you talk to a lot of racecar drivers, they are fascinated by any type of vehicle. There is interest; I would love to do a driver-team swap day with the INDYCAR guys. They come to run our cars for a little bit and we could drive the Indy cars.

“It is really cool that Jimmie (Johnson) will be testing an Indy car (at Barber Motorsports Park). He has talked to me a little about that and it is awesome. I have to figure out this stock car thing first,” Blaney acknowledged, “and then maybe have more leverage to do something like that and mess around with it.”

Now that he’s got the contract talks out of the way – as usual, it’s a “multi-year” deal without specifics being named – Blaney is fixated on doing his job in Phoenix on the one-mile oval this weekend and Atlanta next week. He feels good about his team’s 1.5-mile setups but will have to find out how his No. 12 Menards/Tarkett Ford Mustang reacts with the low downforce package being used in Phoenix. Blaney led 94 laps in the spring race at Phoenix last year and is hoping he can keep and advance his lead in the Valley of the Sun.