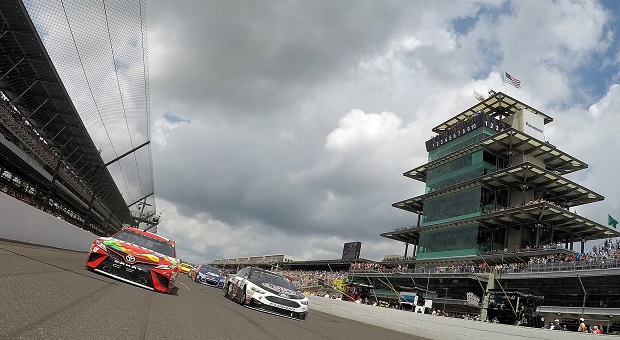 As the stars of NASCAR rolled onto one of the most historic tracks on the schedule, the sport’s rising stars would find out what it’s like to earn their place in motorsports history after kissing the bricks for the first time at Indianapolis Motor Speedway.

In the closest NASCAR XFINITY Series finish at the historic track, the current leader in the Sunoco Rookie of the Year standings, William Byron, proved he had what it took to permanently engrave his name in NASCAR history after a hard-fought win in Saturday’s Lilly Diabetes 250.

Led to the wave of the green flag by points leader Elliott Sadler, the story of this 100-lap race would be lead changes. While Kyle Busch led six times for a race-high 44 laps, this Monster Energy NASCAR Cup Series driver’s experience wouldn’t be enough to hold off a hopeful rookie like Byron. The JR Motorsports driver, who started this race in third, made a decisive pass past his teammate to take the lead on Lap 85. While Byron appeared to have a win in place, he would be forced to hold off Richard Childress Racing driver Paul Menard.

Despite gaining two spots, from fourth to second, over a six-circuit stretch from Laps 90 to 96, Menard wouldn’t have the ability to overcome Byron’s blocking abilities, which gave the No. 9 team the second historic victory of the 2017 season.

“This is awesome,” said Byron, who won in his first visit to the Brickyard. “I have never been to a Brickyard 400 or an Indy 500, but I watched it as a kid. I know that it takes a lot to win these races, and to win here is so special.”

Kasey Kahne did all he could to dispel the shadow overhanging his 2017 Monster Energy NASCAR Cup Series season and his racing career after snatching victory from the jaws of defeat Sunday at Indianapolis Motor Speedway.

While motorsports analysts’ chosen favorite to win the Brickyard 400, Kyle Busch, picked up the pole for his second straight year and even raced his way to both the Stage 1 and 2 wins, his No. 18 would be left crumpled outside the Turn 1 wall after Busch and Martin Truex Jr. tangled on a restart with 49 laps remaining in this race. After Busch’s potential to once again kiss the bricks at Indy was destroyed, fans were treated to a return to old school NASCAR racing. A long stretch of green-flag racing would eventually give way to utter chaos as drivers like Clint Bowyer, Kurt Busch, Jimmie Johnson and Erik Jones, all of whom had been running in or near the top 10 throughout the afternoon, were eliminated in heart-thumping crashes.

In the end, it would be the No. 5 of Kasey Kahne and No. 2 of Brad Keselowski who left racing nose to nose during the second overtime restart of the 2017 Brickyard 400. Kahne cleared race leader Brad Keselowski through the first two corners and crossed the overtime line on the backstretch before NASCAR called the record 14th caution of the race. That ended the event with Kahne in the lead, and when he took the checkered flag under yellow a lap and a half later, the driver of the No. 5 Hendrick Motorsports Chevrolet had his first victory since an eleventh-hour win at Atlanta in August of 2014 that propelled him into NASCAR’s postseason.

Kahne was breathless with exhaustion in Victory Lane, the result of withering heat inside the cars in a prolonged race that featured three red flags, one for rain and lightning and two for incidents. But the implications of the triumph weren’t lost on him.

“To win at this track is unreal,” said Kahne. “We have always come really close to a win at this track. We lost to Jeff (Gordon) and we lost to Tony (Stewart), but today strategy got us here. This Farmers Insurance Chevrolet was great once I got out front. I just had to get there. I’m exhausted, but am ecstatic about this unbelievable win.”

Despite earning a place in motorsports history, Kahne’s future continues to hang in the balance at Hendrick Motorsports. Asked post-race what the victory does for Kahne’s future, Rick Hendrick only replied, “it puts him in the playoff.”

While Kahne pulled off a victory that NASCAR fans will continue to talk about for years to come, it is Martin Truex Jr. who will lead the champions of the Monster Energy NASCAR Cup Series into next weekend’s battle at Pocono Raceway.

Stay tuned to RacingJunk.com for all the latest NASCAR news.