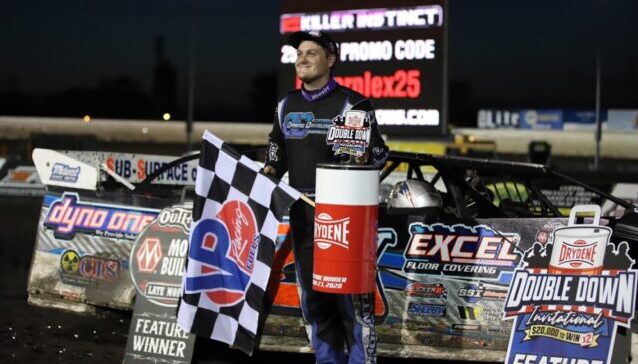 While the World of Outlaws NOS Energy Drink Sprint Car Series put up one heck of a battle in their own Drydene Double Down Invitational at Federated Auto Parts Raceway, in Pevely, Missouri, the World of Outlaws Morton Buildings Late Model Series put on their own action-packed Double Down Invitational at Jackson, Minnesota’s own Jackson Motorplex. The first live race since the COVID-19 shutdown, did not disappoint, especially for first time race winner Ricky Thornton, Jr.

From the jump of Saturday’s 60-lapper, it was all Thornton Jr. and Chad Simpson leading the way for the 24-car field. While Simpson would lead most of this race, it was Thornton Jr. who would prove that he had what it took to rally for the win. Although the driver of the No. 20RT slipped from his pole position to third on Lap 6 Thornton quickly rallied after Chris Madden passed him for second and drove back around the Scott Bloomquist Racing, Drydene No. 0M to reclaim his lead.

As the laps wound down in this race, the halfway point would see Thornton back in a heated battle that would cost this driver serious ground. In fact, a caution on Lap 40 nearly changed the whole race after the No. 7 of Ricky Weiss drove underneath Thornton and slotted him back into second.

“I kept running around the top and then all of a sudden Weiss got under me and passed me,” said Thornton. “I thought that as long as I could get back by him and maybe block him, I could hang on and get around him, but that didn’t happen as quickly as I hoped.”

Along with Weiss, Thornton would also fall back behind his early race nemesis – Chad Simpson. Proving his speed time and time again, Thornton managed to reel Simpson back in, but it was passing the No. 25 that would prove to be a challenge. Fortunately, this challenge would become easier after Simpson’s misstep on Lap 53.

When Simpson railed around the outside a little too heavy, and jumped the cushion at the exit of Turn 2, Thornton would get his golden opportunity to turn down the track and drive by his nemesis to claim the race lead with seven laps remaining. During a restart with six laps remaining a three-way battle would ensue for second place between Simpson, Weiss, and Sheppard, which all played a part in helping Thornton escape from the hornet’s nest behind him. After Weiss and Sheppard disposed of Simpson, they made one last-ditch run at Thornton but did not have enough as he earned $20,000 with a win in the Drydene Double Down Invitational.

“This win is a HUGE one for me,” said Thornton. “I have always wanted to run a Late Model and Todd and Vicky Burns have made this dream come true for me. I swear I have never gotten nervous in a car, but this weekend was for sure the most nervous I have ever been, especially in those final seven laps.”

The World of Outlaws Morton Buildings Late Model Series will continue its RETURN to RACING tour next weekend with an “Inside Out” doubleheader at Iowa’s Davenport Speedway, May 29-30. Stay tuned to RacingJunk.com for the latest from the dirt.