A return to racing in wine country gave three legendary NHRA drivers a chance to earn some of the most impressive repeat wins at this weekend’s 32nd annual Toyota NHRA Sonoma Nationals, at Sonoma Raceway. The son of NHRA legend Billy Torrence has been all the rage lately, but Billy himself would end the three-race winning streak of his son, Steve Torrence, and put his Capco Contractors Top Fuel dragster in the winner’s circle at the NHRA Sonoma Nationals. While this marks only the third win of Billy Torrence’s career, defending Funny Car event winner Robert Hight captured the 50th win of his Funny Car career at the NHRA Sonoma Nationals after earning yet another victory at Sonoma Raceway. The NHRA’s Western Swing has also been a good luck charm to veteran Pro Stock driver Greg Anderson, who, after going a year without a victory, has now won back-to-back victories after defeating Alex Laughlin at the NHRA Sonoma Nationals. 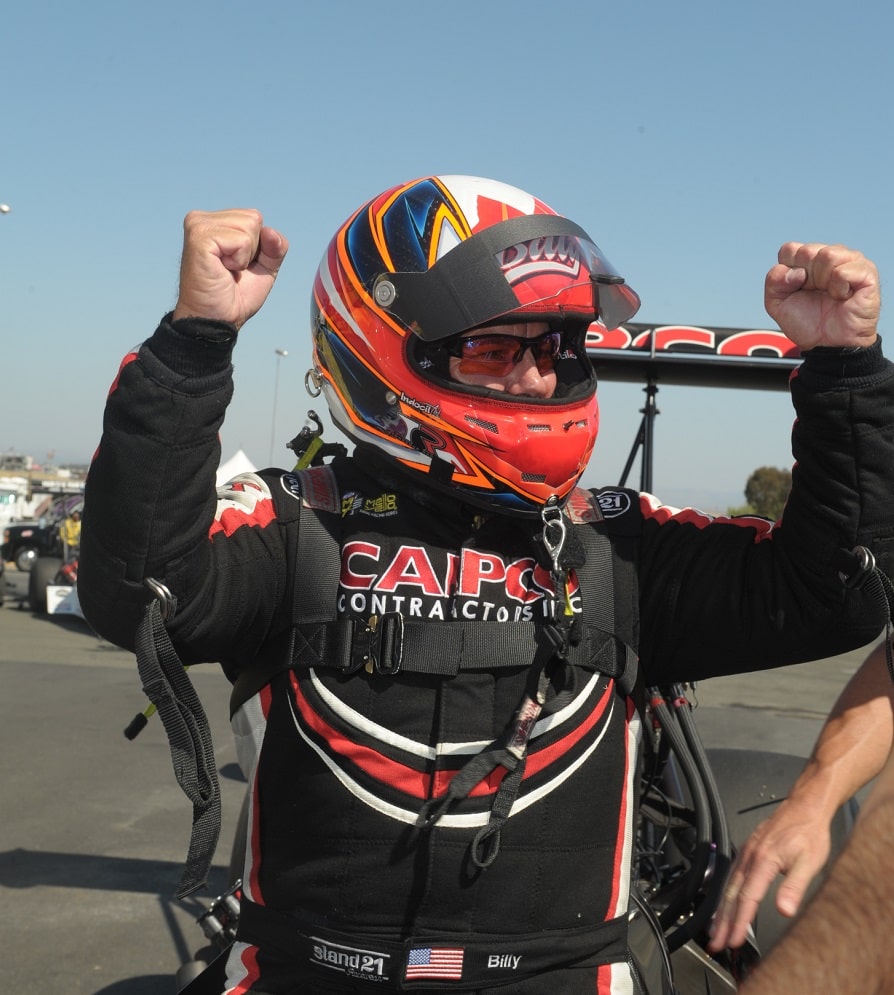 Despite competing on a limited schedule this season, Torrence and his impressive Capco Contractors Top Fuel dragster team drove past rookie of the year candidate Austin Prock, Steve Faria and his son and reigning world champion Steve Torrence to race his way to Sunday’s final round against Clay Millican.

After leaving the starting line .032-second behind Millican, Torrence was able to drive around this holeshot advantage to turn on his fourth win light with a narrow margin of victory of .006-seconds.

“This definitely gave myself and my hard-working team a chance to brag,” said Torrence. “We knew Clay had a good car and I knew I needed to be on time. After I eased it in there, I was confident that I had enough car under me to get the job done.”

Thanks to his third career win, Torrence is just 31 points away from an NHRA Countdown to the Championship position despite racing only racing on a limited schedule. 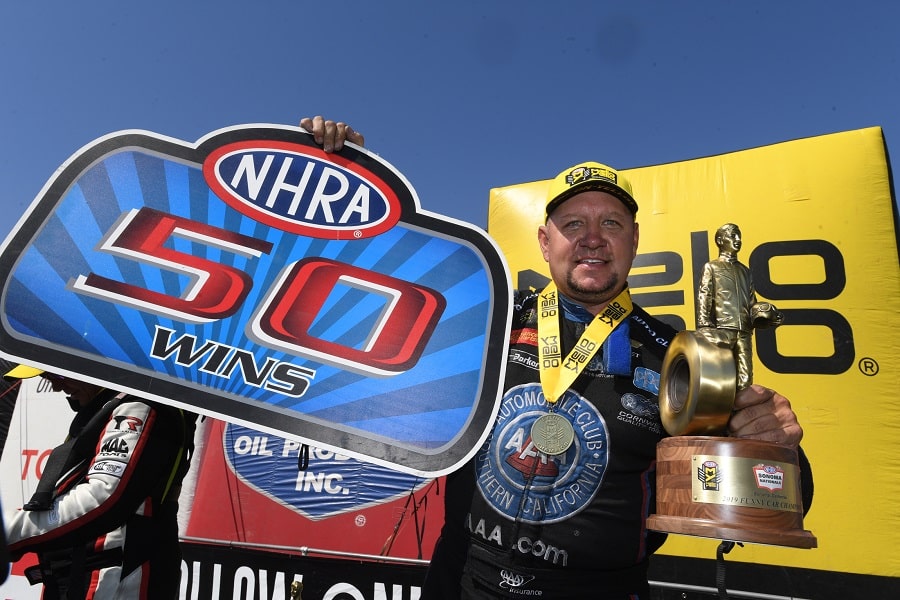 After defeating last week’s winner Tommy Johnson, Jr. as well as Blake Alexander in route to yet another final round, Robert Hight moved on to Sunday’s final round against Matt Hagan. Getting off the line by a hundredth of a second proved to be just the ticket that Hight needed to best Hagan’s 4.03-second effort to earn his fifth Wally in seven final rounds in a row as well as the 50th win of his Funny Car career.

“I just have to pinch myself,” said Hight. “The first time I saw these cars it was John Force and Jim Dunn running and it was just… ‘Oh my god, these are superheroes and now I get to be one of these guys and it feels amazing.’”

Following this victory, Hight now has an impressive lead in the point standings over Tommy Johnson, Jr. going into the Northwest Nationals in Seattle. 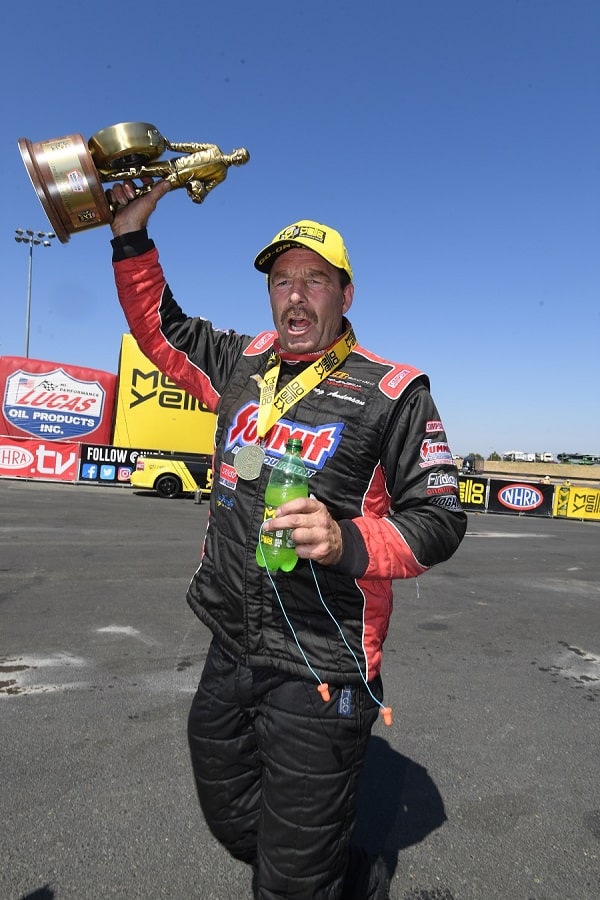 Hight wasn’t the only legendary driver to earn repeat victories this weekend. After beginning his start on the NHRA’s Western Swing with a win at the Dodge NHRA Mile-High Nationals, Pro Stock driver Greg Anderson was back on top at the NHRA Sonoma Nationals.

Anderson did not have an easy route to the final. Along with defeating K.B. Racing teammate Jason Line in the semifinals on a holeshot, Anderson got a lucky break in the second round when Elite Performance racer Jeg Coughlin Jr. was unable to get his car to fire after beating Kenny Delco in the first round by .03-seconds.

After moving onto Sunday’s final round against Alex Laughlin, Anderson was second off the starting line, but quickly took the lead as the Texan shoved the clutch back in. Anderson got close to the wall down track, but was able to keep his Summit Chevy Camaro centered enough to turn on his eighth-straight win light.

“I think sweeping the Swing is so difficult because all three tracks have totally different characteristics,” said Anderson. “Winning this one gives me a lot of confidence that I can actually accomplish the sweep. That is a big boost to my confidence and to the team’s confidence. I always say that I won’t keep racing when I feel that I cannot win anymore, but I think this shows that we still can.”

Despite his latest win, Butner retains his massive points lead in the Pro Stock standings going into Seattle.

The 2019 NHRA Mello Yello Drag Racing Series season continues at the NHRA Northwest Nationals, in Seattle, August 2-4. Stay tuned to RacingJunk.com for all your NHRA coverage!