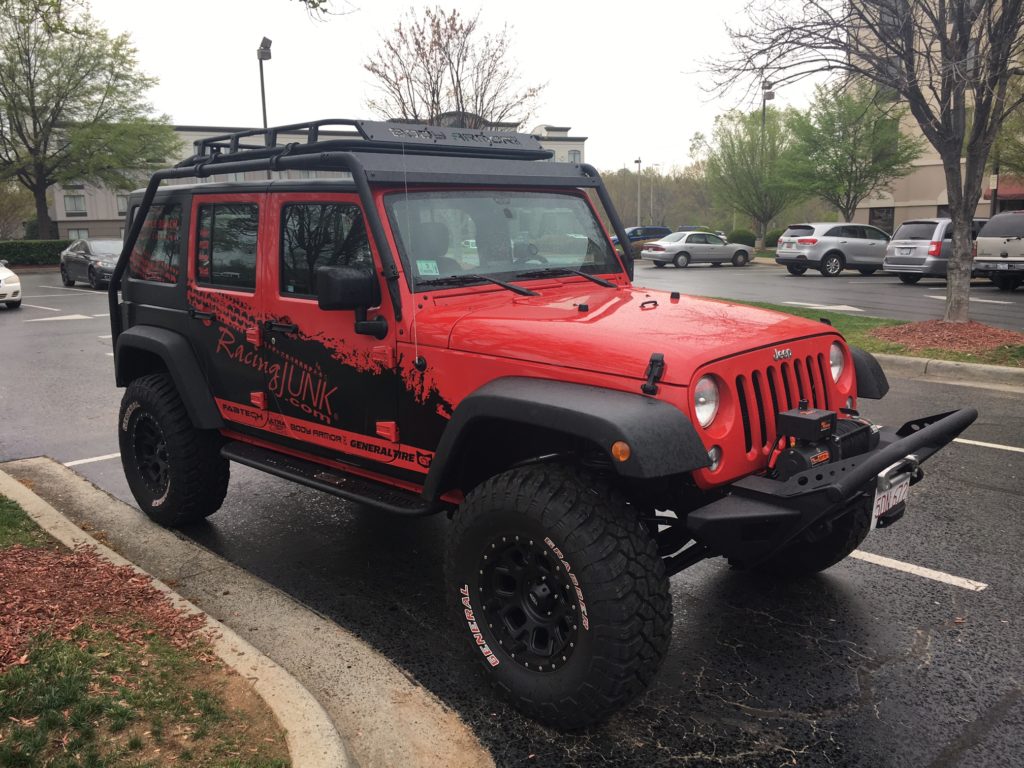 RacingJunk.com officially kicks off its latest giveaway, a 2017 Jeep Wrangler Unlimited with custom accessories, this weekend at the Charlotte Auto Fair in Charlotte, North Carolina on April 6-9, 2017.

The vehicle giveaway is becoming a tradition with RacingJunk, beginning with the celebration of the Racing & Performance Classified’s 15th anniversary in 2014 by giving away a modified Chevy Silverado at the Las Vegas SEMA show. In 2016, RJ gave a custom built 1953 Chevy Sedan Delivery RestoMod beach cruiser to a lucky winner.  This time around, to celebrate a renewed focus on the off-road market, RJ is customizing a 2017 Jeep Wrangler Unlimited.

“We’ve been really lucky to partner with some of the best folks in the business over RacingJunk’s tenure,” says VP of Sales, Jim Sweener.  “And this year is no exception. This Jeep lets us showcase some of the amazing off-road products our partners have to offer while providing a vehicle that speaks to a whole new segment of racers and auto enthusiasts. Plus, it’s just cool, even as a commuter vehicle.”

The vehicle makes its debut at the Charlotte Auto Fair, one of the country’s largest automotive events, before hitting the road for a summer and fall of car shows, off-road races and expos, tractor-pulls, and more including the Lucas Oil Off-Road Expo, the Goodguys 18th PPG Nationals, and SEMA.

“RacingJunk.com supports all kinds of motorsports, from drag races to circle tracks, truck and tractor pulls to the hot rod, muscle, antique car and motorcycle markets.  With a new focus on certain segments, we hope to raise awareness of our services in other aspects of the racing and performance industry,” explains Sweener.

“Off-roading is a big market right now. Between the multi-generational nature of the participants, and the easy entry point for just getting out on the weekend and having some fun, it’s something a lot of people are enjoying both in addition to racing and instead of it. We want to show those folks that RacingJunk is a place to help support those hobbies, from zooming through the desert on a UTV to heavy-duty crawling in an endurance race to finding replacement new and used parts on our site after a break. We’ve got the partners, the advertisers, the classifieds space and  the community to support this segment.”

The giveaway officially launched on April 1st and will continue through March 31, 2018.