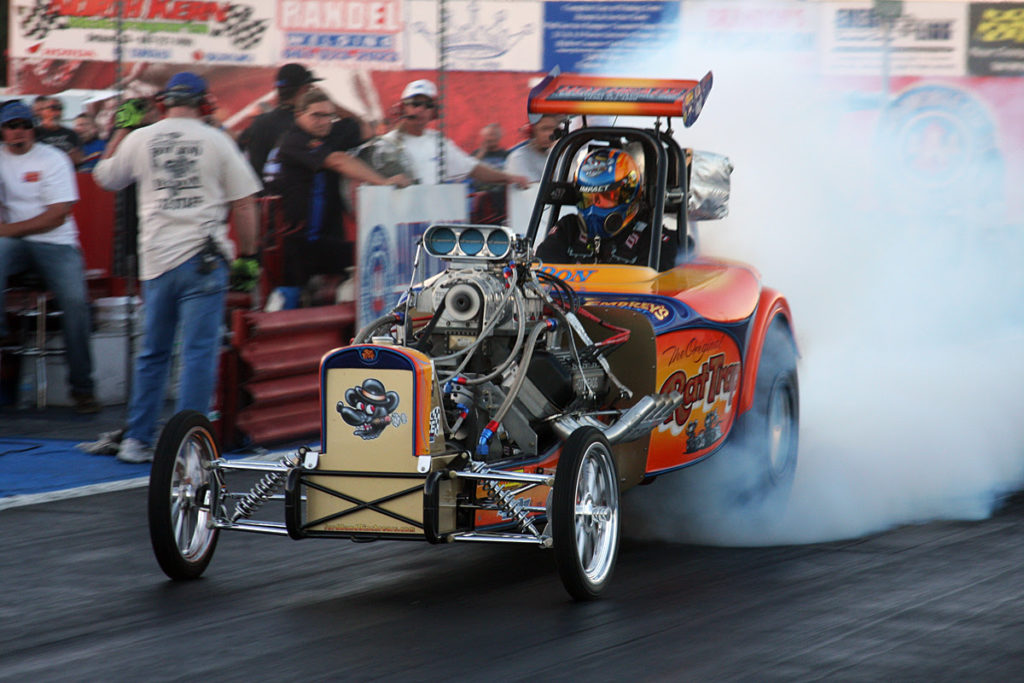 The Quarter Mile Foundation will team up with Rat Trap Racing of Franklin, Tenn. at the 2016 SEMA Show, Nov. 1-4 at the Las Vegas Convention Center. The team’s “Rat Trap” car will be a part of the Foundation’s booth (Booth 11000) in the Grand Concourse area of the Central Hall.

The “Rat Trap,” owned by Ron Hope, is a classic Fuel Altered (AA/FA) car which hearkens back to the early days of the sport. It is an exact reproduction (built in 1995-96) of the final Dennis Watson chassis, which was built in 1968 and began to race in 1969.  There were two “Rat Trap” cars prior to the 1968 chassis. The car uses an Austin Bantam roadster body shell mated to the Watson chassis.

The late Don Green was the originator of the Rat Trap, and built the original supercharged, nitromethane-fueled Chrysler 392 engine.  He also built, and provided the tune up for, the current engine.  This year marks the 50th Anniversary of the Rat Trap.

“This car symbolizes the early period of drag racing, where the cars were unique, and evolved by experimenting with emerging technologies to gain advantages on the track,” said Traci Hrudka, Foundation Chairman. “The ‘Rat Trap’ had some pretty famous drivers, such as Gary Gablich, Frank Harris, Dan Collins and others during its years of competition in the late 1960s and early 1970s.

“Ron Hope and the car are active participants in the nostalgia match racing circuit in North America, and the car has made appearances in England, Europe, Australia and New Zealand, along with several other restored or reproduced Altereds.

“The presence of the ‘Rat Trap’ at the SEMA Show creates a strong link between today’s performance aftermarket and the very early days of drag racing and the industry it created.”

Ron Hope will be at the Foundation’s booth, signing autographs and chatting about the car and the need to protect the legacies of the pioneers of the sport and industry. He is also involved in the Land Speed Record community, racing a modified Fuel Roadster. He will be joined at the booth by good friend and fellow Fuel Altered driver Dave Hough, who races the popular “Nanook” AA/FA car from his base in Las Vegas.

Times for the autograph sessions are yet to be determined, and will be announced well before the show opens.

The Quarter Mile Foundation is a 501(c) (3) not-for-profit foundation. It is currently producing PROJECT 1320, a for-television documentary film series about the history of drag racing and the parallel growth of the performance automotive aftermarket