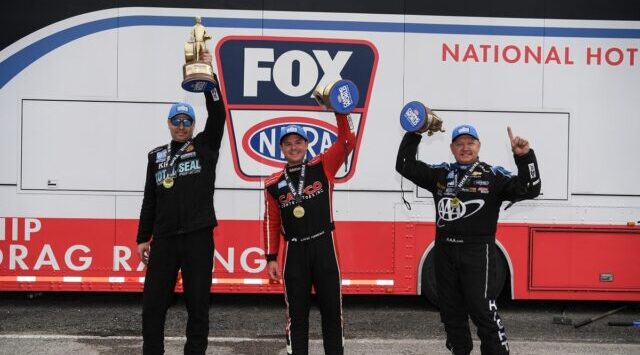 The only way to explain a rather strange weekend for the 34th Mopar Express Lane NHRA SpringNationals presented by Pennzoil is with the word Overcome. Beginning with a shortened schedule, due to an impending weather pattern, and even having Sunday’s elimination rounds postponed until Monday, after a Sunday rain out, three drivers would also have to overcome all this for a long-awaiting victory. Beginning with the King of Top Fuel – Steve Torrence, who may have won the last three of the first five races but has been chasing the elusive win at his home track since his Top Alcohol Dragster days nearly two decades ago. After stopping Top Fuel veteran Doug Kalitta in Monday’s rain delayed final round, Torrence overcame what he calls a “snake bite” to earn the victory he had been chasing.

Torrence would not be the only driver to overcome a rather challenging weekend. After missing the bulk of the 2020 race season John Force Racing Funny Car driver Robert Hight overcame his hiatus in style with his first win in more than a year at this weekend’s NHRA SpringNationals after racing past Funny Car champion Ron Capps in Monday’s final. While Torrence and Hight conquered some serious challenges, the largest overcomer of the SpringNationals weekend was Pro Stock driver Matt Hartford. After going five races deep into the 2021 season without as much as a semifinal to show for it, Hartford finally overcame a slow start to his season after taking down final-round opponent Deric Kramer when he nursed his Total Seal Camaro to the finish line after shaking the tires at the beginning of his takeoff in Monday afternoon’s final elimination round.

Coming off a convincing win a week ago in Charlotte, the Torrence Racing Capco crew had no problems adjusting to the warm and muggy conditions present in Houston for much of the weekend beginning with a 3.727 pass, which landed Torrence and his team in the top spot. Despite a hot start, Sunday and Monday’s final rounds were far from smooth sailing. In addition to his off-pace performance in the final, Torrence slowed to a 4.04 in the opening round, but that was enough to cover Mitch King, who was making his first start since 2008. Although it appeared that history would repeat itself Torrence was quick when he needed to be, including a 3.703 in his semifinal win against Clay Millican and 3.71 on his quarterfinal bye run. While Torrence’s final round competitor Kalitta was just about to take on Brittany Force in a crucial round-one match on Sunday rain interrupted his attempt and pushed final eliminations into Monday.

As the weather broke and Monday’s elimination rounds began to resume, Torrence and Kalitta would find themselves neck and neck in the final round. To finally overcome the mountain that had been blocking him for so many years Torrence needed just a 4.00-second pass to earn career win No. 43 and after Kalitta’s Mobil 1/TRD dragster smoked the tires early, which made this feet an easy one.

“We have run well here in the past, but we get to the final round and something always seems to happen. It feels like we have been snake bit,” said Torrence. “I don’t know if I’ve had win repellant on me or what, but we thanks to the unbelievable to have the success we have had this year we have finally earned a win at my home track. To win in Texas in front of our Capco crew and fans is more special than most.” 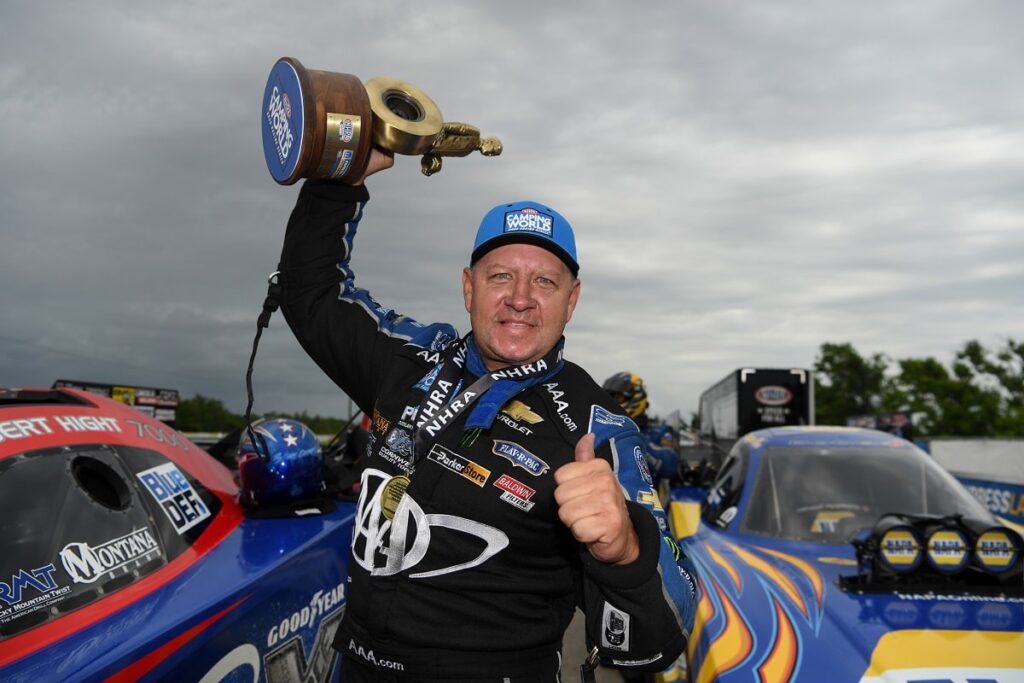 Not many drivers can take the better part of a full year off, and come back without skipping a beat, but Robert Hight is not like most drivers. After a runner-up finish in Gainesville, Hight has now completed his overcoming comeback story thanks to his 52nd career win at the Mopar Express Lane NHRA SpringNationals presented by Pennzoil.

A winner here in 2005, 2014, and 2019, Hight and his Jimmy Prock led team have a handle on the Houston Raceway Park track surface, and that proved beneficial during one-shot qualifying with a 3.954 that was good for the No. 5 spot in the field. Hight approached Monday’s eliminations with bracket-like consistency, including four runs between 3.93 and 3.90. Hight opened with a single after Bobby Bode was a no-show due to his college commitments. Following a win against Cruz Pedregon, Hight took on Bob Tasca III’s Motorcraft Quick Lane Mustang in a semifinal battle that could almost be described as a must-win since Tasca entered the race as the championship leader in the Funny Car class. Hight powered to a 3.909 to cover Tasca’s 3.949-second pass.

In the final, Hight was paired with Ron Capps in a race featuring two sure-fire Hall of Famers who have combined for 117 victories in more than 900 starts. The heavyweight bout ended early when Capp’s NAPA Dodge smoked the tires, and Hight laid down a solid low 3.9-second run for the fourth straight round with a 3.916-second pass.

“These races are hard to win, and Houston Raceway Park has a special place in my heart,” said Hight. “After sitting out last year, you wonder if you are ever going to get another one of these types of wins because they are pretty tough to obtain. John’s Peak Camaro has been the class of the field at the last few races, and they helped us on Monday in Charlotte. We tested, and they got us back on track and I cannot thank them enough for making this happen.” 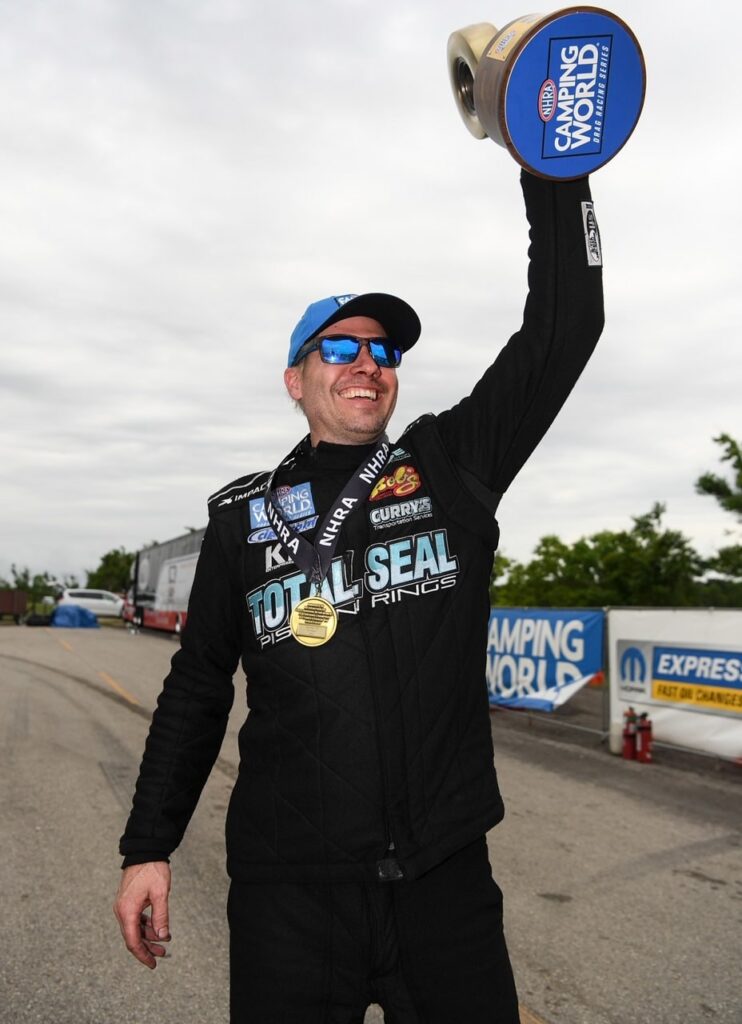 After a slow start to the 2021 season, Matt Hartford was back on his game this weekend at Houston Raceway Park. Managing to shake off his earlier misfortunes, Hartford’s Monday elimination rounds began with a win against Kenny Delco and included tough battles against four-time and current champ Erica Enders and defending Houston winner Aaron Stanfield. As he headed into Monday’s final against Deric Kramer, Hartford made a withdrawal from the luck bank when both he and Kramer shook the tires. Hartford recovered more quickly than his rival and nursed his Total Seal Camaro to the finish line for his Houston win.

“We have had the power to win all year, but not the luck,” said Hartford. “We had a line-lock problem that was really hard to diagnose, and we changed everything, but the problem was still there. As it turns out, we had two defective pieces and after fixing these we are back on top, which is great because Texas has always been great to us.”