I made the trek to Bradenton Motorsports Park, Bradenton, Fla. today to watch Jeff Morris run his front engine dragster with his group the Southern Slingshots. I wanted to follow up with him live and in person after interviewing him by phone for my first Racer Interview article for RacingJunk.com (stay tuned). 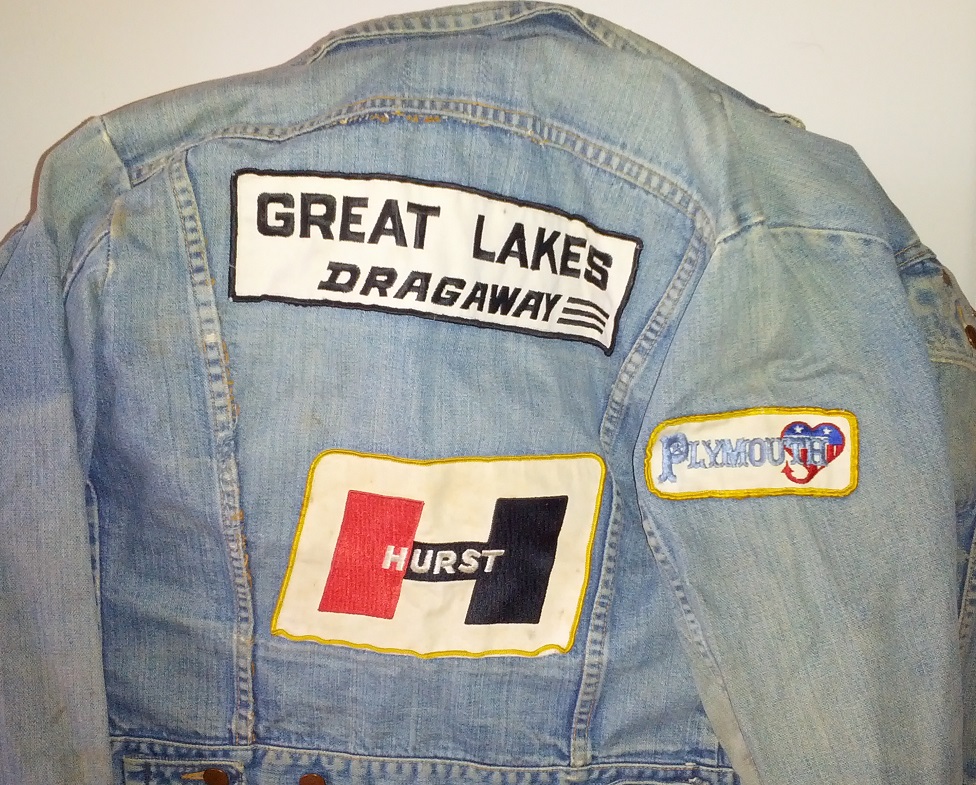 I had not been to a local drag strip for several years. As I neared the track, my head flooded with memories, great memories, of the years I spent following jet cars & trucks around Florida after I moved here about 14 years ago. There were no jets today, but everyone I know that drives a jet was in my heart and thoughts. I can’t wait to see many of my old pals at Bradenton’s Snowbird Outlaw Nationals – Jet Jam Night of Fire, Dec. 6-8. I also want to check out the new Palm Beach International Raceway, in West Palm Beach, Jupiter, Fla. Several jets and awesome cars and dragsters will light up the Citrus Nationals there this coming weekend, Nov. 8-10. The last time I went to the East Coast for a race, the track was named Moroso Motorsports Park. The new owners remodeled it extensively. Even though I’ll miss the old track, I can’t wait to see the new one and make some new memories.

I got my start writing about jet cars & trucks in 2003 at these two tracks and Orlando Speed World, Orlando, Fla. But my love of drag racing goes way back. I realized at Bradenton today that this year is my 40th anniversary of falling head over heels in love with “the strip.” It all began in 1973 at Great Lakes Dragaway in Union Grove, Wis. My boyfriend had a 383 ’69 Roadrunner and we’d drive up from suburban Chicago for big events and to race. It was love at first sight and sound. Let me put it this way, on my prom night, I was at the drag strip.

It was fitting to be hit with all these memories at today’s event, the Art Malone Southern Nostalgia Muscle Car Shootout. One of the most perfect days for racing I’ve ever seen in Florida, it was warm and breezy under a clear blue sky. It was the utter opposite of a night I’ll never forget at the Snowbirds. My teeth were chattering as a howling 40-degree wind pierced my parka and long underwear. I kid you not. My newly thinned blood was telling me I really was a Floridian now as I helped all my jet friends get packed up to head home after the race.

But the sun was shining brightly as I arrived at Morris’ pit. He was preparing to make his first run, which was going to be a memorial for a friend who had recently passed away. Morris carried some of his ashes with him on a slow pass as a tribute to his love for drag racing. The friend’s family was emotional during the pass, but thrilled that he got to go down the quarter-mile one last time. 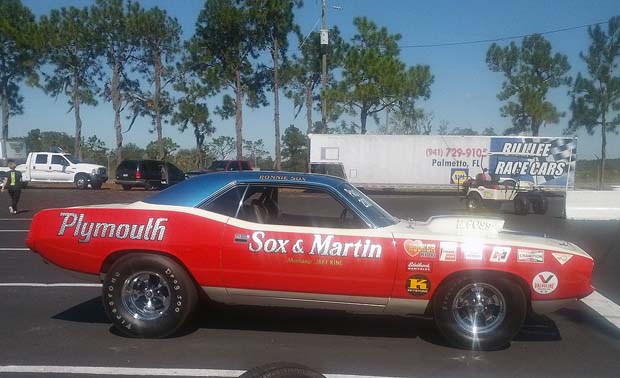 After some racing, I witnessed my first “Cacklefest,” a tribute to racing great Art Malone. Among many other things, Malone was 1963’s AHRA Top Fuel World Champion, a supporter of, and substitute driver for Big Daddy Don Garlits, and a member of the AHRA Hall of Fame. Malone passed away at age 76 earlier this year from injuries sustained in an airboat accident.

The Cacklefest began with about 20 cars and dragsters rolling onto the track in both lanes and parking at a slant facing the finish line. Once staged, a track official gave the drivers the signal to start their engines, and all the cars revved and “cackled” at each other and the crowd for several minutes. The cars left the track in pairs.

The rumbling parade included the Sox & Martin Barracuda and A/FX cars, which raced several times during the day. Even though I’ve seen them locally before, I was blinking my eyes in disbelief at the stunningly maintained cars from “back in the day” running so great today. As a MOPAR gal, it’s always great to see them. When I got home, I ran to the computer to do some more remembering of Sox & Martin’s contribution to drag racing.

In between runs I got to take a close look at the cars entered in the nostalgia car show. My favorite was a 1950’s big green monster van/truck that painted to look all rusty and junky. However, the opened hood showed off a gorgeous engine and several shiny chrome gauges were lined up inside the windshield. Sadly, I couldn’t tell what kind of car it was. I’ll find out though. Parked in front of it, and elsewhere in the pits, were several custom “banana bikes” with super high handlebars and long rakes. Popped my first wheelie on one of those.

I love cars, but I’m a nature lover too. Another highlight of my day was seeing couple of beautiful butterflies, including a Tiger Swallowtail, fluttering about the grassy pits and bleachers. I tried to get a photo, but no luck. The juxtaposition of these delicate fliers and beautiful old racecars captured the look and feel of the day just perfectly.

Before I knew it, it was time to leave. On my way out I stopped near the entrance gate to see what was going on under what looked like a Top Fuel tent. It was a Top Fuel tent alright, covering Sweden’s Team Starta Racing Top Fuel motorcycle. I talked to its pilot, Peter Svensson, who made a world record 5:70 quarter-mile pass on it in 2012. Svensson and his team hope to race the bike at the Haltech World Finals in Bradenton this weekend, Nov. 8-10. I was pretty amazed to see a Top Fuel bike, but he told me there are eight others running mostly in Europe. 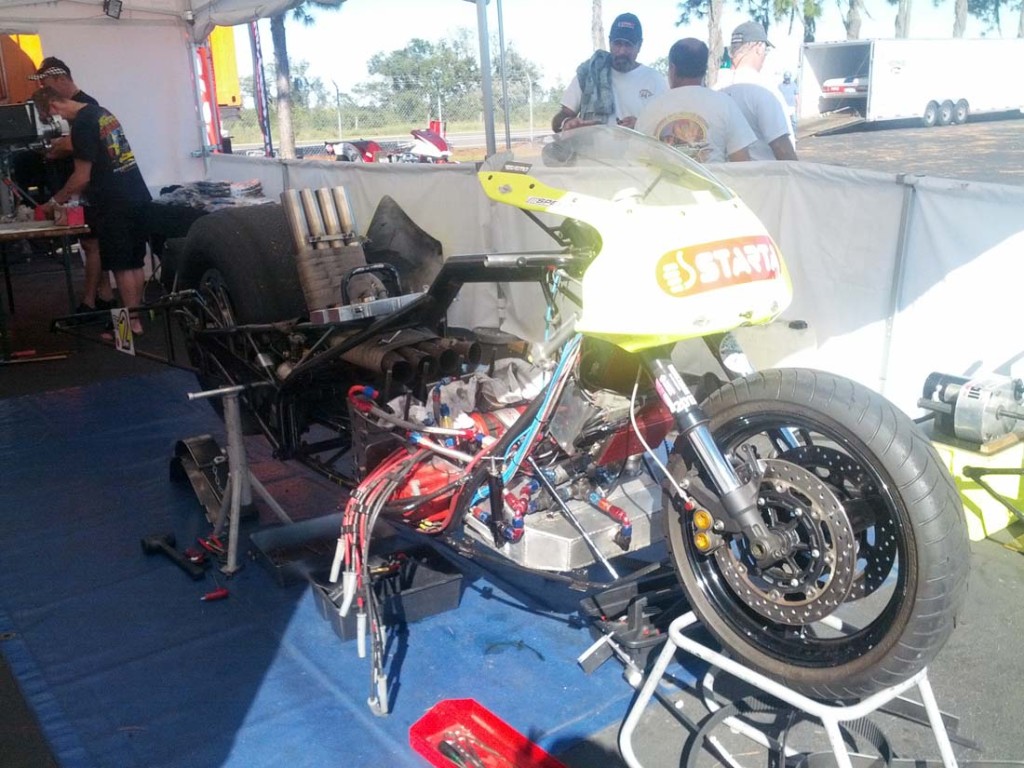 In addition to Peter’s awesome machine (which is another story in and of itself that I just might have to write about, as well as the Peter himself) the coming weekend’s event will feature Eric Teboul’s Rocket Bike, which has clocked a 5:19 at 250 mph. There also will be Nitro Bikes and a Pro Dragster on the line-up. I have to confess, I’ve never been a big motorcycle drag racing fan, but I can’t wait to be converted into one this weekend. You’ll hear all about it in my next On Track blog.