RacingJunk News > News > Not All of the Dodge Vipers Had to Be Crushed, Until Lawyers Got Involved 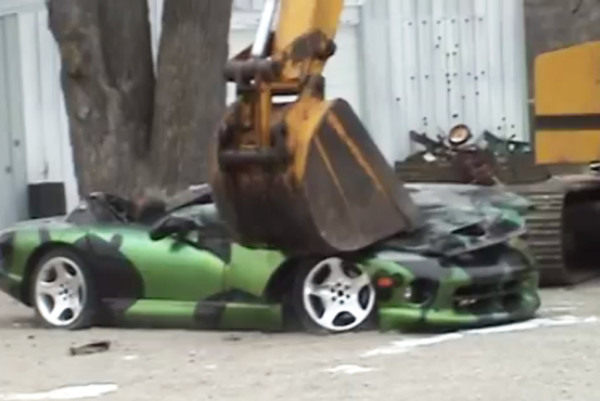 We all know the story by now. Chrysler has ordered a large group of technical schools and colleges around the United States who were given Dodge Vipers to work on 10 years ago to take them all to their local crusher. When these reports first hit the media yesterday, we were told that Chrysler ordered these Vipers to be crushed after a couple kids took them for joyrides and crashed them. Since these cars are preproduction and they cannot be sold to anyone, Chrysler still owned them so when these kids crashed the loaner Vipers, Chrysler was hit with millions of dollars in lawsuits. It turns out that a bunch of that wasn’t true as the company isn’t aware of any accidents and if they arent aware of accidents, they wouldn’t have paid millions to those people involved in accidents that didn’t happen.

Chrysler isn’t ordering these Dodge Vipers to be crushed because of million dollar lawsuits but these cars are going to the crusher because of legal mumbo jumbo. Chrysler made a statement late yesterday afternoon claiming that these Dodge Vipers were given to these schools around the country with the understanding that when they were no longer legitimate learning tools, they would be destroyed. We had a chance to speak with an individual familiar with the contractual dealings between the Chrysler Group and these technical schools pertaining to the Dodge Vipers and she explained that this whole situation went far beyond simply deciding that the cars were no longer needed.

The initial reports stated that all of the 93 Dodge Vipers headed to the crusher are preproduction vehicles are cars that cannot legally be sold. Our contact explained that while there were most certainly some preproduction and/or prototype cars (including the blue Dodge Viper GTS Coupe that is Viper #4), not all of these Vipers fall into that category. Some of the Vipers headed to the crusher as part of this learning tool program could, in theory, be sold to the public. Sadly, the program contract between Chrysler and these schools does state that the cars are to be destroyed at the end of their tenure as a practice patient for tech school students around the country.

While some of these cars are preproduction and they have aspects which make them illegal for sale to the public, the Chrysler Group wants to make sure that none of these Dodge Vipers were sold by the schools that were given them. To make sure that they cannot be sold, Chrysler retains legal ownership of the car. The problem with the automaker retaining ownership is that when the schools can no longer use the cars, the automaker could suddenly be burdened with a bunch of aging cars that have been beaten up by technical students for 10 years. To make sure that they don’t get stuck with a bunch of cars that they cannot use and that the schools don’t sell the cars, the program requires that the cars are crushed when the schools no longer want them. It should be noted that a great many prototype and preproduction cars are either crushed or completely parted out once the company is done working with them but this seems particularly absurd when you are talking about crushing 93 Dodge Vipers.

Many of the self-appointed critics around the internet feel that by putting this crusher clause in the Dodge Viper learning tool program, the automaker isn’t paying proper respect to these historic American performance cars. It turns out that the Chrysler Group is very much aware of the historic importance of these cars and before the decision was made to order these Vipers to the crusher, they did attempt to “save” them. However, since contracts were involved, lawyers got involved and through those discussions the fate of these Vipers was sealed.

Our contact explained that the automaker was perfectly aware of both the historic importance and the collectable value of some (if not all) of these Dodge Vipers. The company had looked into reacquiring some of these Vipers and while she didn’t know exactly how many the company would want back, the intent was there. Figure that some of the cars were production level so they could be sold to collectors while the cars that couldn’t be sold due to their prototype or pre-production status most certainly have components on them that could be sold by the piece. For instance, 93 Vipers have 372 wheels and some of those wheels are surely production quality so they could be sold. The problem with that is the logistics of the automaker selling used or refurbished parts, how to apply warranties and how to go about marketing used parts as this is relatively unheard of in the dealership world. Of course, they could avoid those concerns of components being roadworthy by rendering the wheels unusable and market them as say, glass covered coffee tables or the base of a floor lamp. The problem with this idea is that the company would incur costs in getting the cars back only to have to spend money to tear the cars apart and send them out to have things made into collectables. Due to these various factors, the company really may not have stood to profit from reacquiring these Vipers so the bean counters may not have liked the idea but this didn’t come to be the way that it is because of good business sense.

The contract is designed to protect the Chrysler Group from having preproduction quality vehicles sold to the public and from getting stuck with a collection of broken down vehicles that they don’t want. The problem here is that the company did want some of them back but the contract said that they had to be crushed. Lawyers met with lawyers with the hopes of finding some solution to save these historic sports cars but in the end – the parties involved could not come to an agreement on how to handle these Vipers. The contract says that when the schools are done with them, they have to be crushed so when the lawyers couldn’t agree on a better plan, the Chrysler Group had no choice but to set into motion the unfortunate final plans for these Vipers. This seems to have become a case of “if I cant have it…no one will.”

While our contact couldn’t confirm this, I suspect that the discussions between lawyers probably came down to money. Would the Chrysler Group have gotten some or all of these Dodge Vipers back, they would have stood to make some money from them in one way or another. The contract is set up to prevent the schools from selling these cars or their components so after being given these cars by the Chrysler Group, these schools may have taken exception to the idea of their students maintaining the cars for ten years only to have the automaker taken them back and profit from them. The schools knew that the company would likely benefit financially from the getting these Vipers back and they may have been trying to get a piece of that pie. At the same time, the Chrysler Group likely wasn’t too interested in paying cars that they still technically owned so with neither group willing to make concessions, the final terms of the contract are being executed. Based on that, it would seem that the schools are the ones who are essentially responsible for the death of these Vipers but the vast majority of the media has presented this entire story in a way that makes it sound like Chrysler is simply sending these unloved, unwanted cars to the crusher. These cars were both loved and wanted but that didn’t make any difference to the lawyers who couldn’t work out an agreement.

The internet is packed full of people throwing a fit about these Vipers being crushed and many of them are passing around petitions to save the cars from the crusher. This is a nice thought but considering the efforts put forth by the company before making the decision to order them all to the crusher – it appears as though these cars will almost certainly be destroyed over the next few weeks.