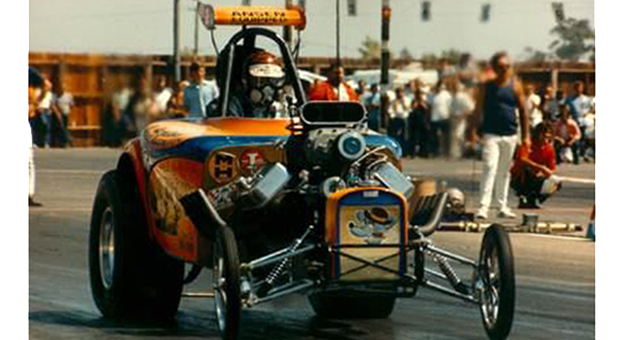 Kevin Cradduck and his crew are keeping a keen eye on the weather in Utah.  With a heavy downpour halting the qualifying runs on the Bonneville Salt Flats this Wednesday, everyone there at Speed Week to run on the salt is pacing anxiously, hoping for dry weather, quick cleanup, and the chance for those first passes starting Monday.  Speed Week’s delay means a lot of downtime, a lot of time for reflection and anticipation.

“I’m a Bonneville rookie,” says Cradduck, “So there’s a lot to do just to qualify.”

It may be Cradduck’s first time on the salt, but the Rat Trap LSR 7551 A/Fuel Modified Rear Engine Roadster that he will be driving has been there before.  Built and owned by Brian Hope, the Rat Trap was run by his 18 year old daughter Victoria Hope in 2012, making it the current record holder at 216 MPH. Victoria is the youngest person to go 200 MPH in the history of Bonneville.

Victoria isn’t racing this year, but she’s there to give Kevin and the rest of the Hope family moral support (the RatTrap is only one of three cars the Hope’s brought to Bonneville). But the Hope Family is best known for the Rat Trap Fuel Altered, which Brian, his father Ron Hope and their crew campaign internationally. Since its initial construction in 1968 and initial debut in 1969, no other Fuel Altered has been as highly publicized as the Rat Trap, which is now celebrating over 40 years of drag racing excitement.

“When Brian called to ask if I would pilot this car at Bonneville Speed Week, I couldn’t accept the offer fast enough”, said Cradduck. “Visiting Bonneville’s Speed Week has been a lifelong dream. Experiencing it from the driver’s seat is something I never saw coming.  I feel welcomed into their family and team, and guarantee you won’t find a better family and support crew anywhere, in any form of Motorsports.”

The two had become friends over the years, and while Kevin is new to Bonneville, he’s no stranger to drag racing. He runs stock and superstock cars, and his work at Nitroplate keeps his work and play passions under the same roof.  Nitroplate offers high temperature exhaust and specialty coating services, so they understand heat and speed.  “Racing is in my blood,” says Cradduck. 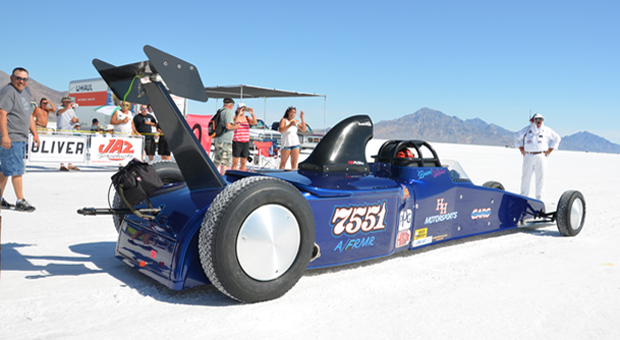 “Once we get on the salt, I have to run the car cleanly on the pass under 150, then 175 and finally 200 before I can upgrage to a Class A license,” explains Cradduck. That license allows drivers to attempt a run over 200 mph.  If they break the barrier, the car is impounded for the night, and then they attempt to repeat the time the next day to go into the record books.  With the shortened schedule, all of this must now happen in a very short amount of time, upping the tension and anticipation. But Kevin is ready for it.

“When Brian asked if I’d be willing to drive the Rat Trap, I asked if we could do anything to the engine. He said yes, so we took the car back to the shop, and along with our collaborators, have gotten it ready to go.  I want to extend a very special thanks to all the sponsors who were instrumental in making this dream a reality, including CARS Recon, NitroPlate High Temperature and Specialty Coatings, Quick Fuel Technologies, Auto Meter, K&N Filters, Fabco-Air, Fig Speed, Biondo Racing Products, Speed Unlimited of Pensacola, Blenkarn Racing Enterprises and 31W Insulation and Day Racing Enterprises,” concluded Cradduck.

Kevin and his crew hope to run the Rat Trap at 230 mph.  We wish them luck and will report back next week to see if they made it!