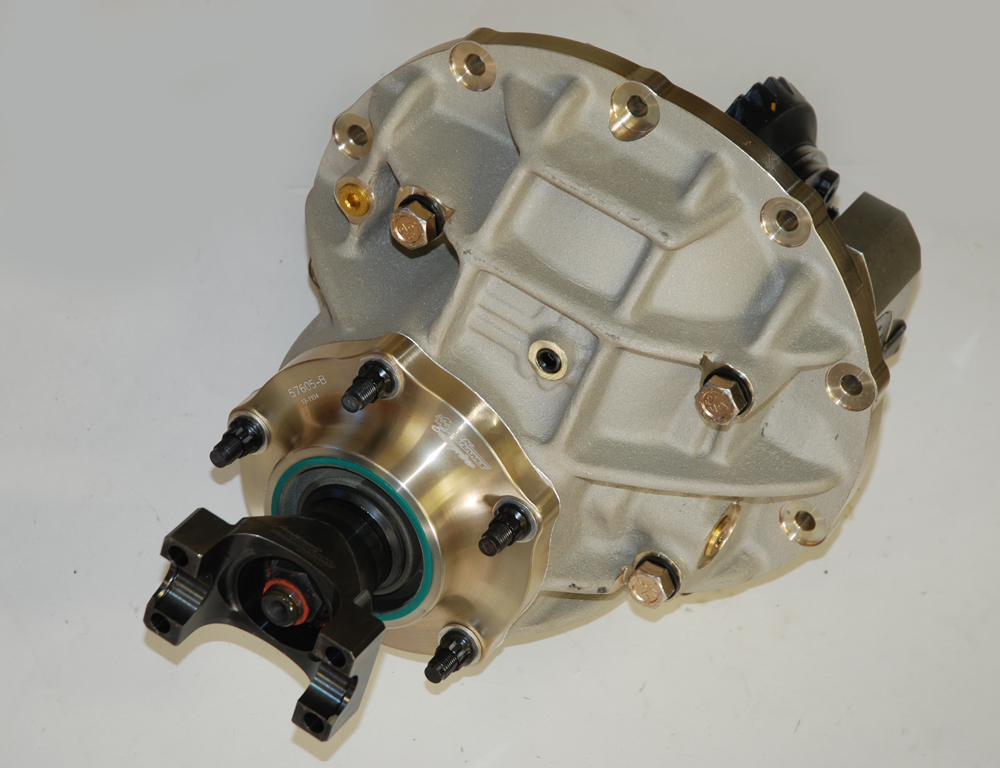 In past issues, we’ve taken a deep look at what is likely the most popular rear end in all of drag racing (and most likely all of high performance too) – the Ford 9-inch.  Those past segments looked at everything from the case to the carrier, to the ring gear to the pinion support.  There’s plenty of info there, but in this issue, we’ll conclude our on-going “Nine Lives” series with tech on pinion yokes. Don’t take the pinion yoke lightly!  That seemingly simple yoke is what bears the immediate brunt of what your power train is producing.  Believe it or not, that lowly yoke is available in a wide array of high performance configurations.  Check it out:

Today, it’s possible to source high quality aftermarket pinion yokes for the 9-inch Ford in three different materials – steel, aluminum and titanium. Mark Williams tells us that their steel pinion yokes are manufactured from heat-treated 4340 steel forgings. They’re designed to accept a heavy duty Spicer 1350 universal joint or a 1480 Spicer joint in both steel and aluminum (although Williams does offer a yoke to accept smaller 1330 series universal joints for some 9-inch Fords).  Williams incorporates special tooling to ensure that the yoke is machined concentric to the pinion spline in order to provide for smooth operation.  You can purchase the 9-inch Ford yokes for 28 or 35-spline pinions.  The yokes accept conventional 3/8-inch U-bolts or billet caps with studs and 12-point nuts.  Finally, these yokes are engineered so that they can accept a pickup for a data logger.

That’s not all.  There’s a NASCAR yoke option available from Williams in 4340 steel too. Here, the yoke is designed to accept Spicer u-joint straps instead of u-bolts. A V-belt pulley is included so that an oil cooler can be driven off the yoke.  Williams points out that the NASCAR yoke is designed for use with their nodular iron ball bearing pinion support or with a Daytona style pinion support. M-W manufactures a special aluminum yoke for drag racing.  The yoke is CNC-machined from 7075-T6 billet material and hard coat anodized.  For 9-inch Ford applications, the billet aluminum yokes can be purchased in 28 or 35-spline configurations; both fit 1350 universal joints.

Finally, Williams offered billet titanium yokes for the 9-inch,  others might still offer them.  While titanium offers strength that is between that of the billet aluminum and billet steel, it offers close to the weight savings of the aluminum yokes.  They were available in 28 or 35-spline pinion varieties, and most are setup to accept 1350 universal joints.  It’s not all bliss though:  Here’s the hitch: Titanium is costly — primarily due to the finicky machining. The problem isn’t the actual base material because it’s rather common (Titanium is the ninth most abundant element in the earth’s crust and the seventh most abundant metal).  The dilemma is that in order to make it usable, it must be alloyed with other metals.  Once that’s done, the manufacturer has to overcome the problem with machining the material.  There are a number of differences between titanium and say, 4340 steel.  One of them is the fact titanium makes for a pretty good spring.  It has a low modulus of elasticity. From a machining perspective, that means willowy parts tend to deflect under tooling pressure, which in turn can create chatter, tool rubbing, and ultimately, tolerance problems. Additionally, titanium is a poor conductor of heat. That means heat generated by the machining process doesn’t dissipate very quickly, and because of this most of the heat is concentrated on the cutting edge and the tool face.  Factor in titanium’s strong alloying tendency (chemical reaction with materials in the cutting tools at tool operating temps) and the result can be galling, welding, and smearing.   When it comes to machining, cutting tools don’t last long with titanium. The last issue with ti is the fact it’s notch sensitive.  If a part acquires a surface imperfection, there’s a really good chance that imperfection will grow (unless properly fixed – which usually means polishing).  As a result, you can expect to pay north of $750 for a high quality ti yoke. Compared to the cost of an aluminum yoke, add in the life expectancy of a quality aluminum yoke, and add the fact that an aluminum yoke is actually lighter and you probably won’t want a ti-yoke!

One more thing, and its in answer to one of drag racing’s most common questions:  What’s the best operating angle for a pinion yoke, transmission slip yoke and a driveshaft?  Williams offers this:

“Operating angles in a driveshaft are the angles between the pinion, driveshaft and transmission centerlines. The optimal angle for any driveshaft to run at is 1/2 degree, where many vibration and frictional problems are non-existent. In order to minimize power loss and vibration in an offset configuration, the pinion centerline and the transmission centerline need to be parallel. In general, the largest angle for racing applications should no more 2 degrees and the centerlines should be parallel within 1/2 degree. With suspension movement the operating angle will increase, but should not exceed 15 degrees. If the centerlines are too far off, the u-joints travel at uneven operating velocities, causing vibration (this is the same problem induced by poorly phased end yokes). This vibration is hard to distinguish from an unbalanced driveshaft.”

Note: You can check the MW web site for helpful information on drive shaft operating angles and the requirement on why operating angles must be equal. So what does all of the information provided in our “Nine Lives” series mean?  That’s easy-peasy. Today, you can assemble a brand new 9-inch without scrounging for used parts at the wrecking yard (or on that online auction site). When it comes to aftermarket 9-inch hardware, you have the opportunity to select hardware that has proven to be considerably stronger than the best of the best OEM pieces.  Aside from the obvious brute strength, they still allow you to maintain the big advantage of the Ford rear – ease of maintenance.   Nine Lives?  You bet.  The 9-inch is not going away any time soon.