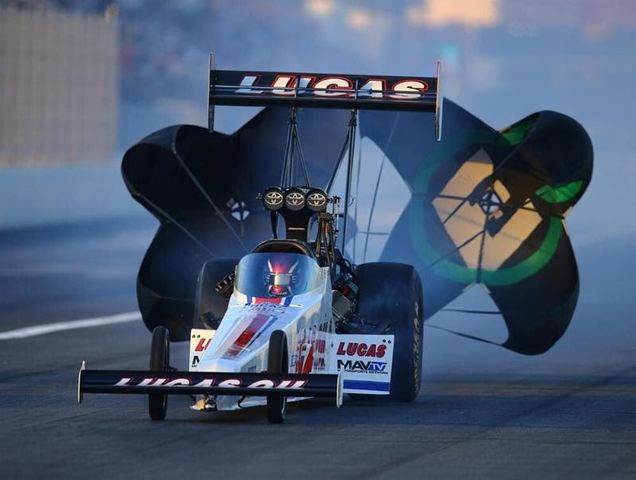 This Labor Day weekend marks the fourth race since NHRA restarted its season following a four-plus month hiatus due to the novel coronavirus, COVID-19. All of the races have been held at historic Lucas Oil Raceway outside Indianapolis, but it would be silly to call this weekend’s gathering Indy4. No, this is the Big Go, the 66th DENSO Spark Plugs NHRA U.S. Nationals, arguably the biggest, baddest drag racing weekend of them all.

Not only will all Mello Yello Drag Racing Series categories be in play – Top Fuel, Funny Car, Pro Stock Car and Motorcycle – but the Pro Mod, Top Fuel Harley and Factory Stock Showdown classes are competing, together with a plethora of Lucas Oil Sportsman classes. The grounds are filled with race cars and those that drive, ride and crew them, along with a healthy smattering of fans through the stands, all checked for COVID-19 symptoms on entry, as are all participants.

In addition to the regular classes, the Jegs Allstars share feature billing, as do the Mickey Thompson Pro Bike Battle, the Hemi Challenge and, let’s not forget the Top Fuel finals for the rained-out Lucas Oil NHRA Summernationals, aka Indy2. The latter competition features two drivers that have never won a Mello Yello NHRA Top Fuel race: Justin Ashley and TJ Zizzo. Both second-generation racers, Ashley and Zizzo won their semifinals at Indy2 yet had to wait until this weekend to find out who would become a first-time winner when rain set in. They’ll settle that dispute during the third and final qualifying session late Saturday afternoon.

Top Fuel has 19 competitors on the ground for this 66th U.S. Nationals. In addition to the drivers mentioned above and the regular competitors who are vying for a championship in the final six events on the calendar, Cory McClenathan joins Tony Schumacher as a returnee, and Cameron Ferre is back as well. Points leader Doug Kalitta has 83 points in hand over two-time and reigning dragster champ Steve Torrence – and since Indy awards 1.5 points, there’s latitude for plenty of change. Leah Pruett is only six points behind Torrence, while Billy Torrence stands in fourth place and is 146 points behind Kalitta. Ashley lags the elder Torrence by 12 points in fifth, for the moment. Terry McMillan and Antron Brown follow in tight sequence in this battle.

The Funny Car finals for Indy2 weren’t completed either, and that match-up between Matt Hagan and Jack Beckman will guarantee Don Schumacher Racing its 350th milestone win. At the 1970 NHRA U.S. Nationals, DSR team owner Don Schumacher notched his first NHRA victory, so when one of these drivers reaches the timing beams 1,000 feet from the Christmas Tree, one of their Dodge Charger SRT Hellcats will mark the eighth consecutive Funny Car win for the DSR team. That final round will – as will all of those that didn’t take place in July – occur during the same third and final qualifying session.

Pro Stock has a voluminous 23-car entry this weekend, which will place even more emphasis on the three qualifying sessions. Since the class, like Pro Stock Motorcycle, wasn’t at the second Indy race, the Lucas Oil Summernationals, they’ve got a clean slate coming into this race with no make-ups to be performed. The two drivers intending to retire at NHRA’s Las Vegas season-closer are leading the standings, Jeg Coughlin Jr holding 44 points over Jason Line, while reigning, three-time champ Erica Enders in third, 77 points back. With points-and-a-half at this U.S. Nationals race, anything can and will likely change as Indy has been known for making new heroes.

The second-generation (or some case third-get) racers on this crowded grid include Kyle Koretsky, Indy3 finalist Troy Coughlin Jr, Mason McGaha and Aaron Stanfield, while Richie Stevens Jr. makes an appearance at this race. The Cuadra family is back with a stable of Fords (Fernando and Cristian), but the battle should be between the powerhouses of Elite Motorsports and Summit Racing, both of whom build engines for other racers in the class.

Pro Stock Motorcycle boasts 19 entries and has the Bike Battle to contend with. In addition to the three Harley-Davidsons – which account for an amazing 12 titles between Andrew Hines, Eddie Krawiec and Indy3 winner Angelle Sampey – the remaining five riders who have qualified for this battle are Hector Arana Jr., Matt Smith, Jerry Savoie, Scotty Pollacheck and veteran Steve Johnson, who missed much of the middle of last season with engine woes.

For your viewing pleasure, count on 21 Pro Mod entries vying for 16 elimination slots, a total of nine Top Fuel Harleys – one rider won’t make the cut – and 24 Factory Stock Showdown competitors. With weather forecasts in the 70s and 80s and little chance of precipitation, this could be the kind of weekend that typifies the U.S. Nationals: loud, lively and competitive.