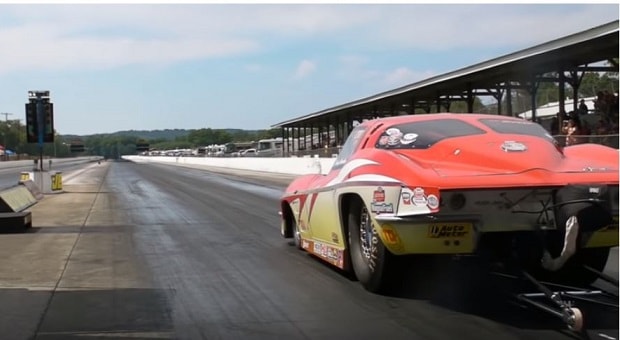 NHRA drivers and fans are mourning the loss of a talented driver following a fatal crash last weekend at Atlanta Dragway. NHRA Top Sportsman racing series driver Randy Alexander died on Saturday after crossing the finish line during the first round of eliminations at the NHRA Southern Nationals.

Alexander, a veteran sportsman racer from Harvest, Alabama, had just crossed the finish line at 160 miles per hour when his ‘63 Chevy Corvette swerved to the left in front of fellow competitor Bob Mandell III. While Mandell tried to avoid smashing into Alexander, his ’57 Chevy Bel Air struck Alexander’s Corvette broadside on the driver’s side at 200 mph.

After flipping and eventually landing on the retaining wall, nearly 150 feet down the track from the finish line, Alexander’s ride came to a screeching halt. A few hours after being extracted from his Corvette and transported to a local hospital, the Alabama driver was pronounced dead.

As the dust began to settle on a sad day, the powers that be at the NHRA extended their deepest condolences: “It is with heavy hearts that we report Randy Alexander of Harvest, Ala., passed away at a local hospital after sustaining injuries in an on-track incident at the NHRA Southern Nationals in Commerce, Ga. The NHRA and the entire racing community extend their deepest condolences and their prayers to the participant’s family and friends. We also ask that everyone respect the family’s privacy during this difficult time.”

We at RacingJunk.com also pass along our deepest condolences and remind all drag racing drivers out there to continue to protect yourselves during the 2018 racing season.

Stay tuned to RacingJunk.com for the latest on this and other developing motorsports stories.

About Ellen Richardson 410 Articles
Ellen Richardson is the author of Behind The Wheel for RacingJunk.com. This automotive sports junkie has a passion for telling an athlete's story while also covering various racing activities. Find out more about her at ellennrichardson.wordpress.com or follow Ellen on Twitter at @ellennrich or Instagram at elnrich33.