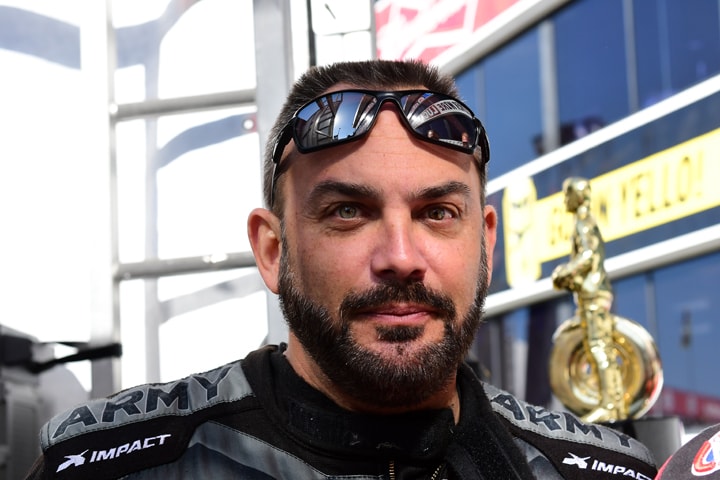 Eight-time NHRA Mello Yello Top Fuel champion Tony Schumacher has been on the racing sidelines since losing his long-time U.S. Army sponsorship almost two years ago. While Schumacher has been at the races, serving as a color commentator for the series’ Fox broadcasts, he’s been yearning to get back in competition. But the time had to be right, the partnership(s) that enabled his return had to be right, the stars had to align.

It’s not a huge surprise that Schumacher’s return occurs in a couple of weeks when NHRA restarts its 2020 season, following a long hiatus as the USA battled the novel coronavirus, COVID-19. After all, both restart races are just a couple of miles away from his father’s Don Schumacher Racing (DSR) workshops. The two races take place at Lucas Oil Raceway, making these events – July 11-12 and July 18-19 less costly for both the team and its partners.

Schumacher joins teammate Antron Brown in representing Steve and Samantha Bryson’s Global Electronic Technology for these two events. Tony Schumacher will drive Brown’s backup car with crew chief Brian Corradi turning the knobs for both the 84-race winner and his three-time championship-winning teammate. Brown’s relationship with Global Electronic Technology began earlier this year and was instrumental in bringing Schumacher and the Bryson family together to enable the massively successful Schumacher back to the water box. 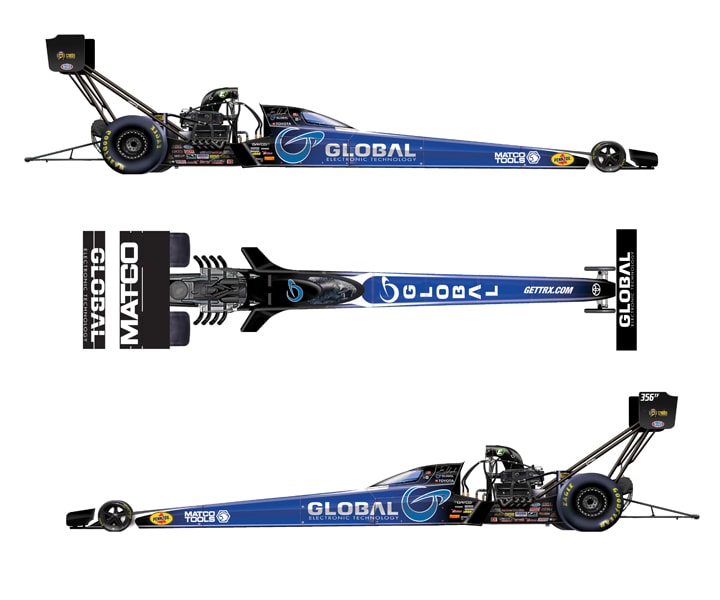 By competing in back-to-back Indianapolis-area events, Schumacher is seeking to add to his lengthy list of accomplishments, while also using these two opportunities to rebrand himself. “I’ve always been the ‘Army’ guy,” Schumacher said of his nearly two decades representing the U.S. Army. “It was an absolute privilege to represent them for so many years (18 seasons), but I’m not that guy anymore. It’ll be exciting to be the face of a different brand when I return to Indy next month. A huge thank you goes out to Steve and Samantha Bryson for allowing me this incredible opportunity to get back out there.”

Global Electronic Technology CEO Steve Bryson noted, “Every day we help our customers win in business, so who better to partner with than the driver who has won more [NHRA] Top Fuel races and championships than anyone? Tony Schumacher is one of the best ever, and to pair him with another all-time great in Antron  brown and DSR, is a dream relationship for Team Global.”

At this time, only the two Indy races in July are on Tony Schumacher’s racing schedule. His ultimate goal, as it has been since the close of the 2018 season, is to assemble a full-time, multi-year program. Until this program came to fruition, Schumacher has regularly stated that he wasn’t interested in pursuing one-off events; what attracted him to this particular opportunity was that ‘everything made sense.’

“I’ve never wanted to come back halfway. If I’m going to do it, I want to do it right and have a real, legitimate shot to win the race. I want to be in a competitive car and I also don’t want to race in anything but a canopy car,” referring to the DSR-developed cockpit canopy used by his team and several others. Schumacher wasn’t interested in having a satellite team that would face release after these two races were completed. His squad for the two Indy races is made up of DSR employees who work in the team’s machine and fabrication shops. “They know how to be safe and they know how to win. Then you have Brian Corradi, who has won championship after championship. We will be competitive; we will do it right.”

Another fact that helped persuade Tony Schumacher and Global Electronic Technology that these two restart races were the right ones to contest is that both contests are being broadcast over-the-air on the Fox network. “I’m thrilled to be able to promote Global on such a large stage. And the fact that it’s at Indy, where I’ve had the most success,” helped persuade all parties. Tony Schumacher has earned 10 NHRA U.S. Nationals titles and is the most successful NHRA driver in Indianapolis history. “It all just made sense.”

Tony Schumacher and his Global Electronic Technology team intend to make two test runs at Lucas Oil Raceway on Friday, July 10th. There are two Saturday qualifying sessions scheduled for early and mid-afternoon on Saturday (12:30 and 4PM ET), while final eliminations take place on Sunday, July 12th, beginning at 9am.

About Anne Proffit 685 Articles
Anne Proffit traces her love of racing - in particular drag racing - to her childhood days in Philadelphia, where Atco Dragway, Englishtown and Maple Grove Raceway were destinations just made for her. As a diversion, she was the first editor of IMSA’s Arrow newsletter, and now writes about and photographs sports cars, Indy cars, Formula 1, MotoGP, NASCAR, Formula Drift, Red Bull Global Rallycross - in addition to her first love of NHRA drag racing. A specialty is a particular admiration for the people that build and tune drag racing engines.