In one of the most exciting weekends on the 2019 NHRA schedule, four drivers earned historic firsts at the NGK Spark Plugs NHRA Four-Wide Nationals at zMAX Dragway. Despite being winless ever since capturing six straight event victories to end the 2018 season, reigning Top Fuel champion Steve Torrence and his Capco Contractors dragster found their way back to victory lane at zMAX. Torrence wasn’t the only driver to earn his first win of the season this weekend. Former Top Fuel world champion Shawn Langdon also found himself back on top with his first Funny Car victory in just his 30th start in his newest drag racing venture. Along with Torrence and Langdon, by a margin of just five-thousandths of a second, reigning series champion Mike Janis would also earn his first Pro Mod victory of the season. Pro Stock Motorcycle driver Andrew Hines also earned a historical first after becoming the first driver in the Pro Stock Motorcycle category to earn his 50th win. 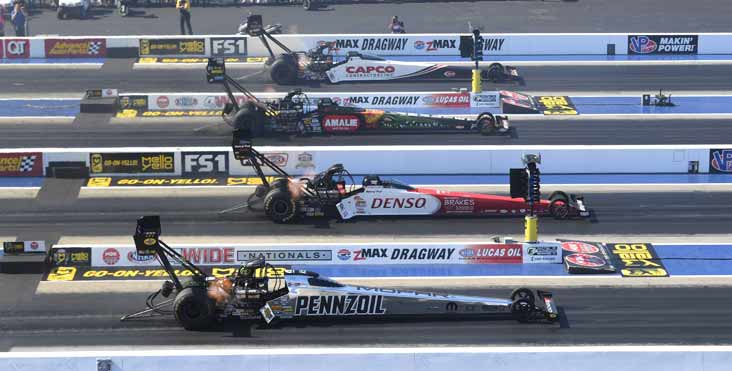 Much like his performance in last season’s NGK Spark Plugs NHRA Four-Wide Nationals, the 2018 Top Fuel world champion would reignite the Torrence Racing spark this weekend at zMAX Dragway. After driving to two straight 3.7-second passes on Sunday, Torrence had the opportunity to move onto Sunday’s final round against Clay Millican, Terry McMillen and Leah Pritchett. After lining up against three of his toughest competitors, Torrence and his Capco Contractors drove to their straight 3.7-second pass for his third straight Four-Wide Nationals win.

“This win is such a relief,” said Torrence. “This hasn’t been the start to the season that we wanted, and this has probably been due to my driving on the defensive side lately. After a change in mindset everything seemed to change and I just knew that I would know what to do to get back on top at zMAX Dragway. It feels so good to turn the tables.”

Thanks to his latest victory, Torrence now takes over the Top Fuel points lead as he and his Torrence Racing team head into Atlanta.

Shawn Langdon, who scored his first career win in Top Fuel at zMAX Dragway in 2012, also became the 17th driver to win in both the Top Fuel and Funny Car classes at this track after driving to a Sunday afternoon final round nail biter against low qualifier Robert Hight, John Force and Matt Hagan.

While it seemed that John Force Racing would be back on top in their hometown after Hight took off in front of the competition, his Auto Club Chevy lost power before crossing the line, which gave Langdon’s Global Electronic Technology Toyota the chance to roar by to collect his first Funny Car win. The victory was the 22nd of Langdon’s career, which also includes victories in Super Comp, where he also was a world champion, and Super Gas. Langdon’s victory also allowed him to join his Kalitta Motorsports teammates – Doug Kalitta, Richie Crampton, and J.R. Todd – as winners this season.

“There are so many things that I have gone through to get to this point,” said Langdon. “I can’t thank my team and fellow drivers at Kalitta Motorsports enough for making this all possible. To beat the guys we did in the final was special and shows how good everyone on this team really is.”

Although Hight fell short of his latest victory, the John Force Racing Funny Car driver continues to lead the Funny Car point standings as he and this team roll into the Arby’s NHRA Southern Nationals. 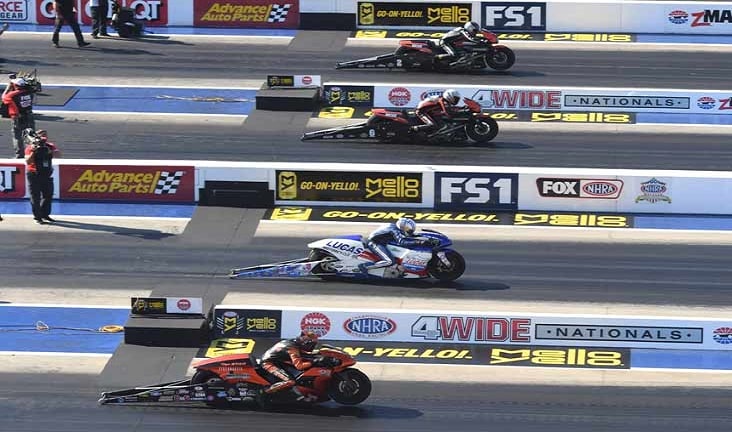 While both Torrence and Langdon earned first-time victories at zMAX Dragway, Pro Stock Motorcycle driver Andrew Hines earned his 50th win after overcoming a controversy in the semifinal round to move onto the final round against Eddie Krawiec, Hector Arana Jr. and Ryan Oehler. Although Hector Arana Sr. appeared to get timed out and Andrew Hines received a red-light start in Sunday’s semifinal round, further review revealed that the stage lights in Arana’s lane never came on and NHRA officials ordered the quad to be re-run. This re-run would give both drivers a chance to prove that they had what it took to race in this weekend’s Sunday’s final round.

Sunday’s final gave Hines and his Screamin’ Eagle Harley-Davidson an opportunity to drive to an impressive 6.831-second pass for his fourth win at the NGK Spark Plugs NHRA Four-Wide Nationals and 50th national event title.

“This was a big day for our Harley-Davidson Screamin’ Eagle team,” said Hines. “There was definitely no shortage of emotions in my head every round this weekend and it is truly amazing to earn this historic win.\”

Thanks to this historic win, Hines continues to lead the Pro Stock Motorcycle point standings going into Atlanta. 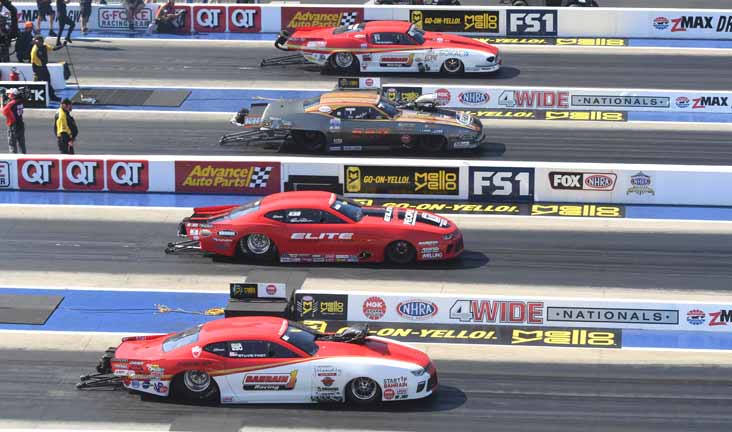 The 2019 NHRA Mello Yello Drag Racing Series season continues with the Arby’s NHRA Southern Nationals Powered by Mello Yello at Atlanta Dragway in Atlanta, Ga. (May 3-5). Stay tuned to RacingJunk.com for all your NHRA coverage!