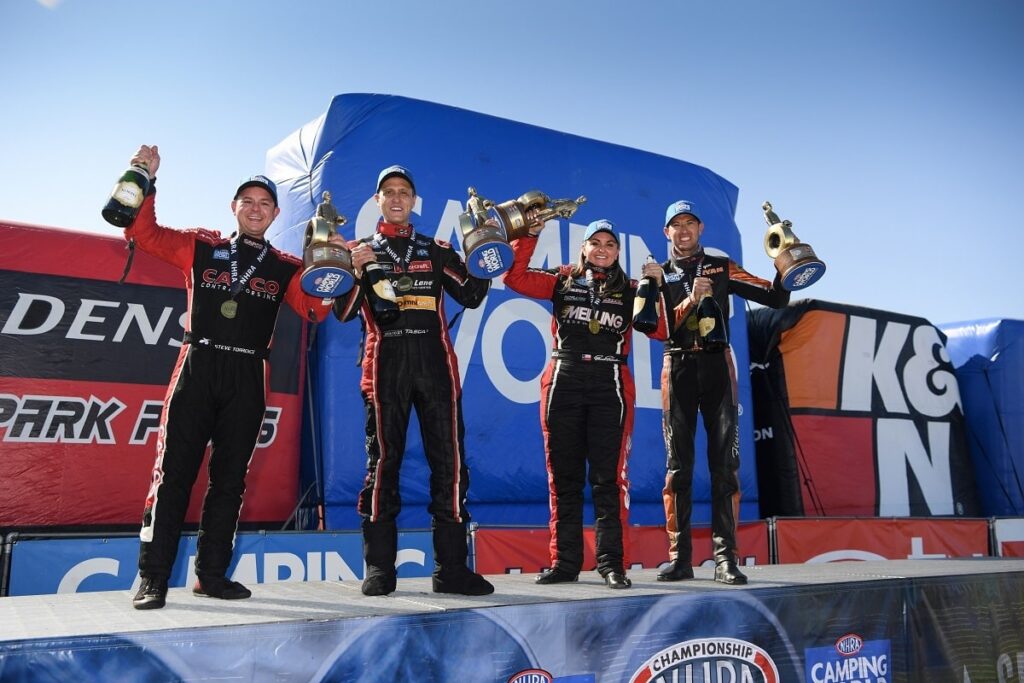 As the stars of the NHRA would return to one of the most iconic drag strips in the country, two former champions would drive to their victories of the 2021 season at the DENSO Spark Plugs NHRA Four-Wide Nationals at The Strip at Las Vegas Motor Speedway. Beginning with the king of Top Fuel, Steve Torrence continued his reign of success for the fifth time in the last six events after taking down Doug Kalitta in a tight battle in Sunday’s final round. Torrence wouldn’t be the only former champion to drive to a four-wide nationals’ victory over the weekend. After powering to a 6.656-second finish ahead of Aaron Stanfield’s final round attempt of 6.667, Enders hit the jackpot at the Denso Spark Plugs NHRA Four-Wide Nationals. While two former champions would be back on the podium at Las Vegas, Ryan Oehler earned his first Funny Car victory after overcoming putting his Flying Ryan EBR into the top-end sand trap at The Strip at Las Vegas Motor Speedway and defeating Cory Reed with 6.911-second pass in Sunday’s final round. 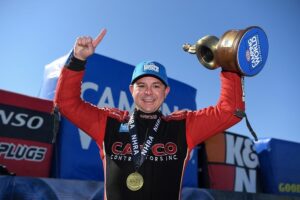 Like most of his four-wide races, Steve Torrence once again raced his way to victory by winning for the fifth time in the last six events. After earning four-wide titles in Charlotte in 2017, 2018, and 2019 and even racing to the victory at the Las Vegas Four-Wide’s, in 2018, once again powered the Capco Contractors machine to his 41st career win after becoming one of the only Pro winners to win both of his pre-final quads.

Despite having to edge out teammate Shawn Langdon to face Torrence in Sunday’s final, the edge that he seemed to find earlier in the day on Sunday came to an end, destroying Kalitta’s hopes for his first four-wide win as well as his 50th win after Kalitta’s engine went sour giving the king of Top Fuel the chance to eke by the competition with a 3.823-second victory.

“This win is amazing, especially on my mother’s birthday,” said Torrence. “I am also excited about taking my new little girl her very first Wally. We had to work hard to get it done today, but we got it done and I’m proud of this.” 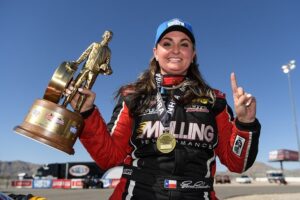 Torrence wouldn’t be the only former champion to win it all in Las Vegas. In fact, luck was definitely a lady in this weekend’s Pro Stock division. Although Erica Enders would kick off her weekend with an unlucky 13th qualifying spot, the four-time world champ’s 300th career start would turn things around during Sunday’s final round after Enders would power her Elite Camaro to a second-place finish behind surprise first-quad winner Dallas Glenn and a holeshot that would earn her a second-place advancement berth as her 6.66-second pass defeated Troy Coughlin Jr.’s 6.64 for the transfer spot.

In Sunday’s final round, Enders would prove that her final crap shoot would earn her the jackpot after a final pass of 6.656-seconds over Aaron Stanfield’s 6.667 and Deric Kramer’s 6.659 after Mason McGaha took himself out of contention with a -.009 red-light. 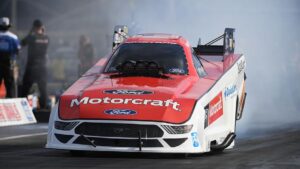 Along with Torrence and Enders, another NHRA legend made huge strides in his legendary career in Las Vegas. Bob Tasca III collected his first four-wide title after his Motorcraft/Quick lane Ford, which spent all three rounds in his favored Lane 4, beat reigning world champ and 2013 Four-Wide Nationals winner Matt Hagan to the stripe with a 3.938-second pass Hagan’s 3.955-second attempt. Tasca also took down Tim Wilkerson, whose 3.922-second pass was the quickest of Sunday’s final, but yet left him sitting in third place. Ron Capps also finished fourth with a 3.978-second as all four finalists ran in the three-second zone.

“It’s so special. My dad hasn’t been out here in a long time and it was great to have him out here for this win,” said Tasca. “I am so privileged to be able to drive the quickest and fastest Mustang on the planet, so a special  thank you also goes out to Ford.” 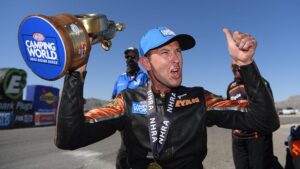 Although former champions Torrence, Enders and Tasca III would drive to yet another victory. One driver would race to only his second Pro Stock Bike victory. Despite beginning his weekend at the Denso Spark Plugs NHRA Four-Wide Nationals with a triple brake failure that put his Flying Ryan EBR into the top-end sand trap at The Strip at Las Vegas Motor Speedway, Ryan Oehler found his spark during Sunday’s final round.

Oehler, whose first career win came last year at the E3 Spark Plugs Nationals in Indy, also had drama in round one when he lost oil pressure en route to winning his opening quad on a holeshot over Angie Smith. After an engine change, Oehler reached the final round by finishing second behind Tommy Johnson and ahead of Chip Ellis and Angie Smith.

After moving on to Sunday’s final round, Oehler continued on his newfound winning streak by beating Cory Reed to the win stripe, with a 6.911-second pass over Reed’s 6.942-seconds. Luckily, other fellow competitors Scotty Pollacheck fouled, and Steve Johnson also broke.

This win was awesome,” said Oehler. “We may have started off the weekend in the sand and even blown an engine, but thanks to my team, crew and sponsors we found ourselves with our second Wally.”

The return to the 2021 NHRA Mello Yello Drag Racing Series season continues at the Lucas Oil NHRA Southern Nationals, in Commerce, GA on April 30-May 2, 2021. Stay tuned to RacingJunk.com for all of the continued return to NHRA racing coverage!

About Ellen Richardson 435 Articles
Ellen Richardson is the author of Behind The Wheel for RacingJunk.com. This automotive sports junkie has a passion for telling an athlete's story while also covering various racing activities. Find out more about her at ellennrichardson.wordpress.com or follow Ellen on Twitter at @ellennrich or Instagram at elnrich33.