Once again, the 2018 NHRA season has come to a powerful close, and the bigger picture is framed very differently than last year. Unlike the end of the 2017 NHRA season, the start of the 2018 Countdown to the Championship was the start to a picture of those whose wins finally led them to a well-deserved world championship.

While the Top Fuel world championship was awarded to the Top Fuel Texan marauder Steve Torrence and his CAPCO Contractors family team, who gained 10 event victories – five of them in the five Countdown to the Championship races at the prechampionship event in Las Vegas – the Funny Car and Pro Stock championships were still up for grabs going into this weekend’s season finale at Auto Club Raceway at Pomona. Thanks to racking up yet another win at Auto Club Speedway, both Kalitta Motorsports driver J.R. Todd and Pro Stock young gun Tanner Gray finally drove their way to their first ever NHRA world championships. 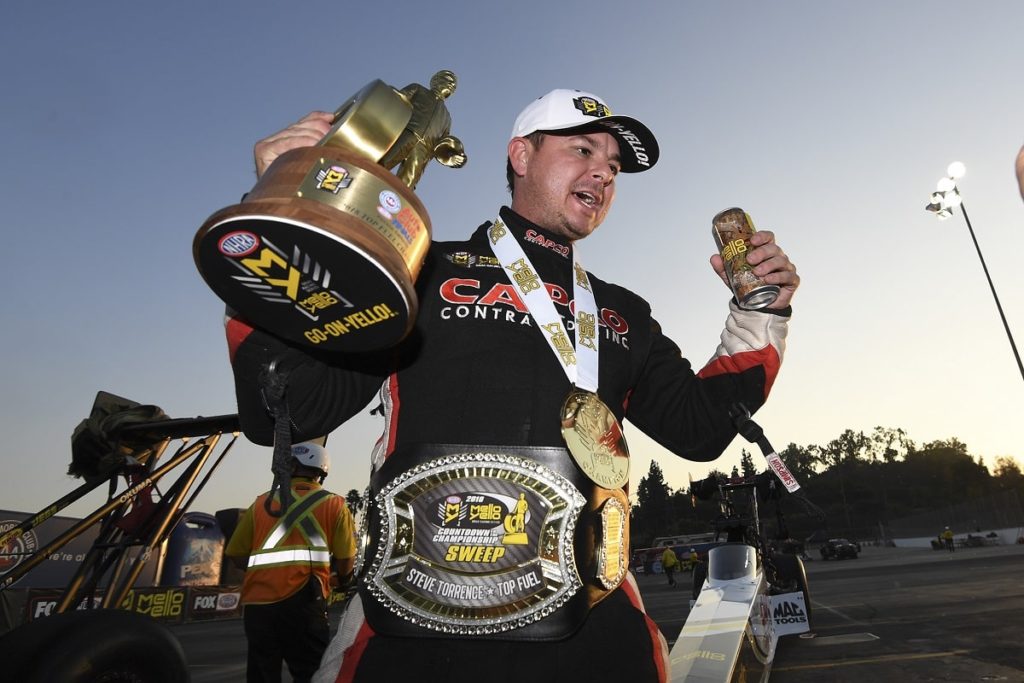 Although he did not need to win yet another final elimination round this season to earn his 2018 world championship, Top Fuel phenom Steve Torrence was back at his old tricks in Pomona. After earning his long awaited Top Fuel championship in Las Vegas, Torrence Racing’s speed demon made NHRA history after racing his Capco Contractors/Torrence Racing dragster to a holeshot win of 3.702-seconds at 330.07 MPH against NHRA’s winningest Top Fuel driver Tony Schumacher, Torrence swept all six playoff races during the NHRA Mello Yello Drag Racing Series Countdown to the Championship all while earning the 27th Top Fuel win of his career and first at Auto Club Raceway at Pomona.

“This whole season has been truly unbelievable,” said Torrence. “To go out and do what those Capco Boys have accomplished is solely by the grace of the good Lord. We have won some rounds that we probably should not have and are truly blessed that we are now going to be in the NHRA history books.” 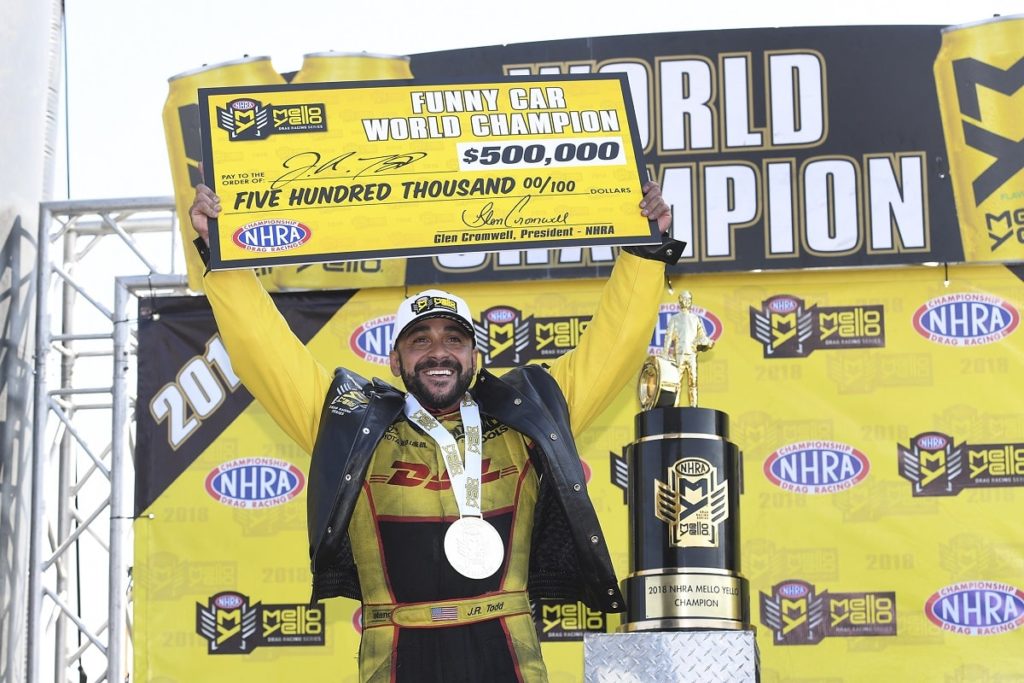 While Torrence had peace of mind in knowing that it would not matter whether or not he won at Auto Club Speedway, the 2018 Funny Car world champion would go into his final race on pins and needles. Defending Funny Car champion Robert Hight, who was sitting second in points going into Pomono, put up one heck of a fight at this legendary track, but after smoking his tires against Bob Tasca III during the opening round of eliminations his dreams of a follow-up championship crumbled right in front of him.

“People kept asking, ‘what do you need to do to clinch the 2018 championship?’ My response continued to be win the final race of the season,” said Todd. “Seeing Robert smoke the tires first round was instant relief. My crew was racing smart and my team did an awesome job preparing my ride all weekend. They stayed focused despite a bunch of distractions around our pit area and they did their job. The other teams at Kalitta Motorsports came over to help, and I cannot thank them enough for making my first world championship happen.” 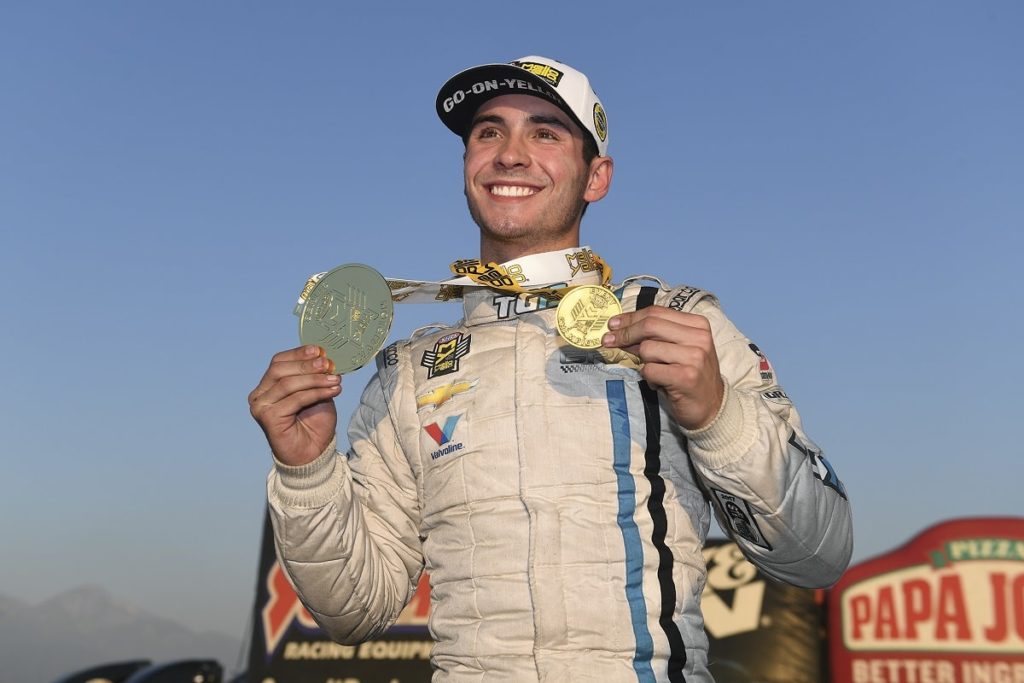 Pro Stock young gun Tanner Gray was also the beneficiary of yet another win at Auto Club Raceway, which led to his first ever Pro Stock world championship. Gray drove past his father Shane Gray, Erica Enders and Jason Line before entering his second consecutive final round appearance at Pomona against Drew Skillman.

With a run of 6.519-seconds at 211.86 MPH, Gray would earn his eighth victory of the 2018 season as well as the NHRA world championship, which couldn’t have come at a better time.

“This was the last time that I was going to race with a lot of those guys, due to my move to NASCAR next season, so it was amazing to do so in such an amazing way,” said Gray. “We had already won seven races, and that is really good and obviously I wanted to win more, but at the same time I wanted to enjoy the time that I had with the guys and make the most out of it.”

We at RacingJunk.com congratulate all the 2018 NHRA World Champions! Stay tuned to each of the developing stories going into the 2019 season.