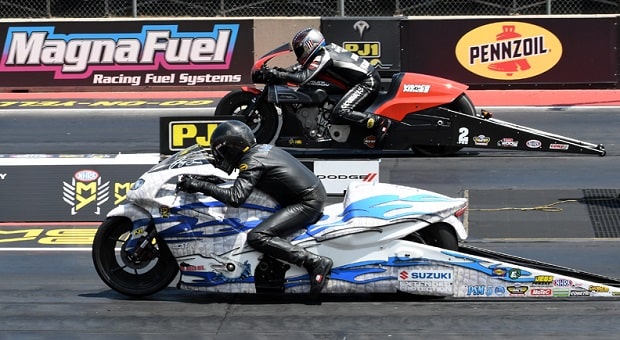 Even as the few riders in NHRA’s Mello Yello Drag Racing Series Pro Stock Motorcycle class have used an outdated Suzuki engine case from the late 1970s, Suzuki hasn’t shown much interest in supporting the class over the past few years. But despite the lackadaisical interest and diminished support, the Suzuki riders have won races and contested and won championships.

The most recent title earned by a Suzuki rider came in 2016, when Jerry Savoie clinched the title in the final race of the season on his White Alligator Racing GS-engined and EFI-equipped Suzuki, earning two victories and four runner-up appearances. A classic come-from-behind result, Savoie earned the points lead only when he took the championship at the World Finals in Pomona that year.

Since then, the class has been an EBR/Harley-Davidson show, with Eddie Krawiec and Matt Smith taking the most recent titles. EBR (Buell) is primarily supported by S&S cylinder heads; the Harley-Davidson program is a full factory project through Vance & Hines. While the Suzuki engine is an unsupported antique in this technologically-advanced world, any approval for updates or replacements for it must come from the manufacturer in order to be NHRA-approved.

In July of this year, Suzuki sent a letter to NHRA advising the sanctioning body that it would like it to approve a new billet 4-valve head produced by Monster Race products. “We are open,” the letter said, “to any head with a 22-degree intake valve angle and a (corresponding) 22-degree exhaust valve angle.” Suzuki further stated it felt this cylinder head would improve Suzuki performance, relative to the S&S EBR and Harley-Davidson V-Twin engines that were winning so many races and championships.

On October 7th, NHRA’s technical administration executive, Glen Gray notified Mitch Brown of Monster Race Products that NHRA has issued its final acceptance of the 4-valve billet cylinder head submitted by the company. This cylinder head is eligible for Pro Stock Motorcycle use only and is contingent that “all units must continue to meet all applicable requirements” of the NHRA rule book. Gray also noted: “Changes to the design, functionality or configuration of the approved component(s) are not permitted.”

Will this move change the structure of Pro Stock Motorcycle in the 2020 season, when the billet head from Monster Race Products enters its first race, hopefully in the 51st annual Amalie Motor Oil Gatornationals, start of the Pro Stock Motorcycle season? And will this acceptance start an expected flurry of similar requests from EBR and Harley-Davidson?