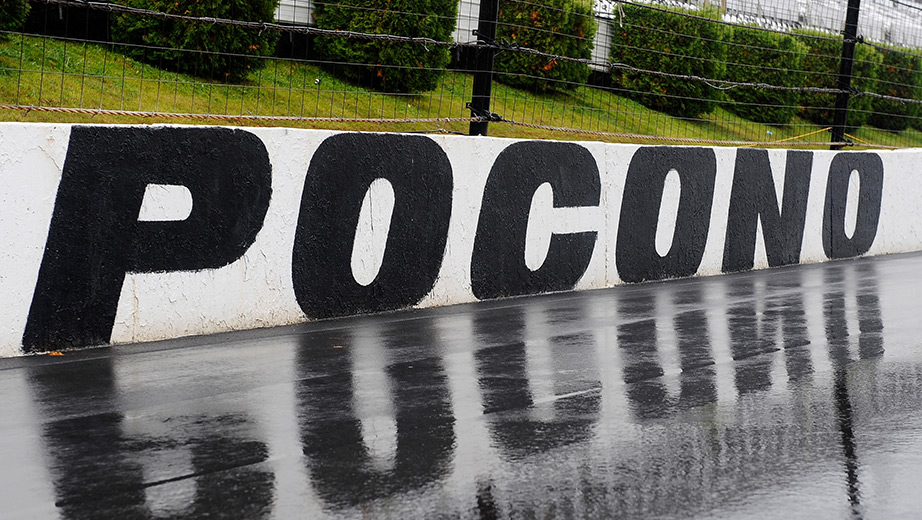 The NASCAR Pennsylvania 400 at Pocono Raceway has been rescheduled due to weather until Monday, August 1, at 11:00 a.m. ET/ 8:00 a.m. PT on the NBCSN network.  The prerace program, NASCAR America will start the day airing at 10:30 a.m.

The forecast for heavy rain showers forced NASCAR Officials to call the day’s events at 2:45 p.m. after numerous tries earlier to dry the 2.5-mile tri-oval that would have taken at least three hours minimum.

Martin Truex, Jr. won the pole position with a speed of 179.244 miles per hour and will be joined on the front row with Carl Edwards when the green flag falls.

Jones Passes, Pulls Away from NASCAR Xfinity Iowa Field in US Cellular 250

Erik Jones passed Ty Dillon with 15 laps to go to win the U.S. Cellular 250 in Saturday night’s NASCAR Xfinity race at Iowa Speedway.  Jones frustrated most of the field directing a controlled fast pace leading for 166 laps suppressing most of the competition.

It was his third victory of the season and fifth of his career driving the No. 20 Toyota Camry for Joe Gibbs Racing in just 45 starts.  His superlative Sunoco rookie season in the series is placing him in the rumor mill for the NASCAR ‘Silly Season’.  Just this year, he has 11 top-five and 12 top-ten finishes in 19 starts.

“It’s a great day,” Jones said in victory lane.  “We had a great car, one that definitely deserved to win the race.  The fastest car I feel like won tonight, which is always a good feeling.  It was an awesome day for us.  I feel like we deserved to win when we came here earlier this year.  It was nice to get some redemption for that one.”

Dillon’s winless drought, which now stands at 66 races, was frustrated after leading for 83-laps fighting a loose condition trying to stay up front.  “I want the win so bad,” said Dillon, the driver of the No. 3 Richard Childress Racing Chevrolet.  “That was all I had.  They (Joe Gibbs Racing) are good right now.

“I’m proud of my guys.  They gave us a great opportunity tonight.  My heart’s been broken every race since Indy (site of Dillon’s last win in 2014).  I want to get in victory lane again.  We’re close; we just have to get a little better.”

Only seven races are remaining on the schedule before the Xfinity series starts their Chase of 12 at Kentucky Speedway.

The NASCAR XFINITY Series returns to action next Saturday at Watkins Glen International for the running of the Zippo 200 at The Glen.

William Byron claimed his fifth NASCAR Camping World Truck Series win of the 2016 season at the Pocono Mountains 150 at Pocono Raceway.  He held off Cameron Hayley at the end by 1.406-seconds after dominating the race leading for 44 of the 60-lap distance at the 2.5-mile tri-oval.

In winning on Saturday, Byron, the pole-sitter driving his Toyota Tundra, broke the previous Sunoco rookie record.  He now has five wins in just 12 races.  Kyle Busch set the mark in 2000 with four wins in his rookie season.

“It means a lot,” said Byron, who pitted for fuel for the last time on Lap 25 and spent the rest of the race saving gas.  “It was definitely a goal—I can’t lie about that.  I knew that was something to beat and we just show up with so much focus.

“We never get off track, I feel like.  It’s just a credit to where we are as a race team, the work we’re doing, the work they’re doing in the shop on the trucks, and we’re putting it all together when we get to the race track.”

There are only four races on the schedule before the NASCAR Truck Series Chase of 8 begins at New Hampshire.

The series takes a break for the next couple of weeks with the NASCAR Camping World Truck race running on Wednesday night, August 17, for the running of the UNOH 200 at Bristol Motor Speedway.