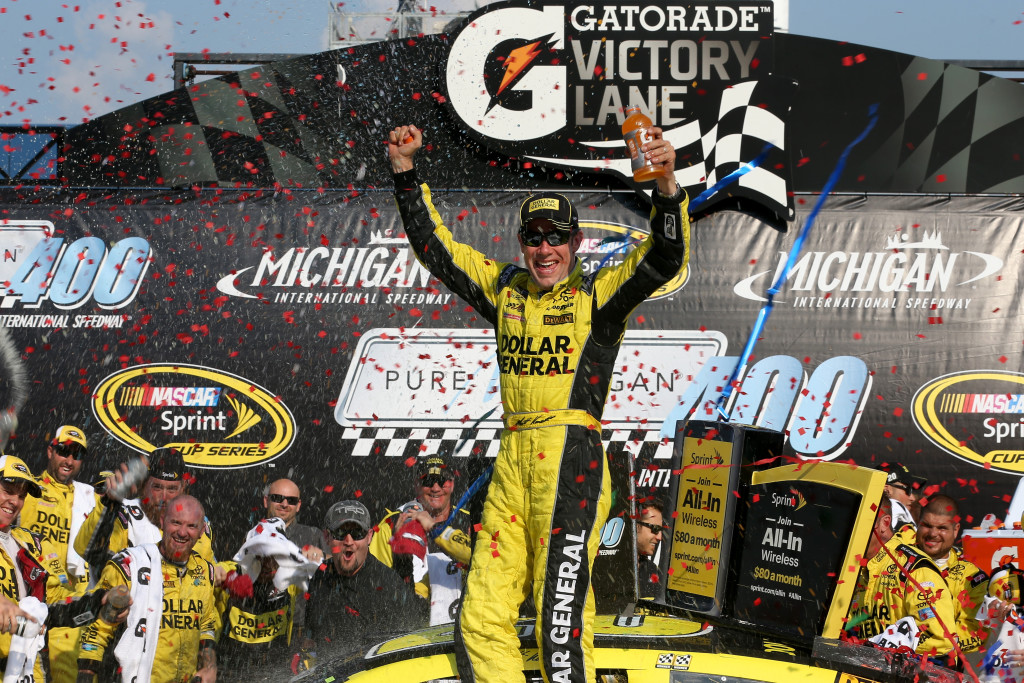 Car owner Joe Gibbs gathered his teams back in the Spring, challenging them after a slow early season start to get their championship form back.  Since then, his JGR teams have claimed five of the last six Sprint Cup events including Sunday’s dominating drive by Matt Kenseth in his No. 20 Dollar General Toyota at the Pure Michigan 400 at Michigan International Speedway.

The buzz in the Michigan garage area all weekend was centered on the NASCAR high-drag areo package and the teams that adapted quickly proved to be the fastest.  Kenseth opened the weekend winning the pole in qualifying, leading the most laps at 146 circuits in the race and collecting his 34th victory of his career.

The 2003 Sprint Cup champion had to survive a restart with 13 laps left, after Jimmie Johnson spun off Turn 4 causing the eighth and final caution of the race.  With a push from JGR teammate Denny Hamlin, Kenseth cleared Kevin Harvick after the Lap 187 restart and went on to win by 1.722 seconds.

“Denny did a heck of a job giving me a good push there to get by,” Pocono race winner, Kenseth said of the last run.  Honestly, the toughest one was with the 3 (Dillon, swapping the lead after a restart on Lap 131).  We went back and forth a few times and made some contact there, and it was hard to get away from him.  My car took about five laps to get going, but once it got going, it was pretty stellar.” 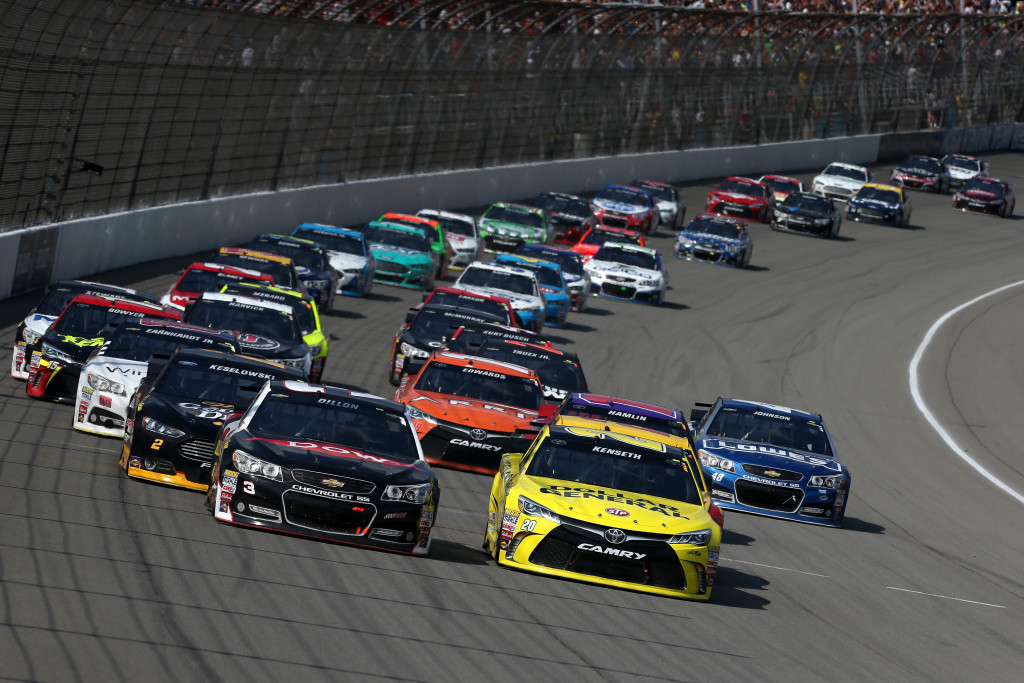 Kyle Busch maintained his No. 2 position in the Chase, finishing 11th and extending his lead to 18 points and 29th to the good over Justin Allgaier, 30th in the driver points standings. 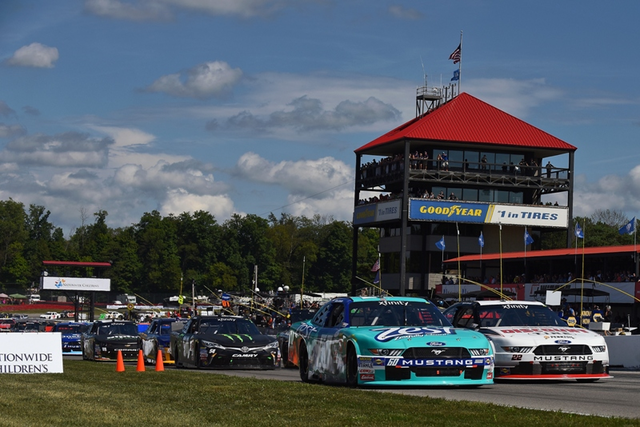 Regan set up Tagliani for a pass on the white flag lap, but had to use the ‘bump and run’ maneuver as a last resort seeing the checkers straight ahead.

After getting booted from a top five finish in last weekend’s road course race at Watkins Glen by Ty Dillon, his JR Motorsports team had to regroup, reconstructing his Chevrolet Camaro from all the damage.

“These guys work their butts off all week,” said Smith after earning his fifth career win. “This car was destroyed door tops down; they rebuilt it in one day.  The guys back at the shop did a phenomenal job, my road guys have stuck behind me for a while.  We’ve had a lot of opportunities to win.  I hate to do it in the last corner, but it’s been too long, I wasn’t going to pass the opportunity up.

“I’ve been wrecked so many times on these road courses, I had to do what I had to do right there.  I didn’t spin him, just got the spot.  We’re going to celebrate hard tonight.”

Tagliani, a talented IndyCar driver, was searching for his first Xfinity Series victory in seven races, but had to settle for a disappointing second after taking the lead from Smith with 15 laps remaining.

“If I knew that he was going to win like that, probably instead of passing him fair and square early on in the race, I would have probably pushed him off a bit,” said Tagliani.  “But, he knows I’m not going to be there next weekend to retaliate.” 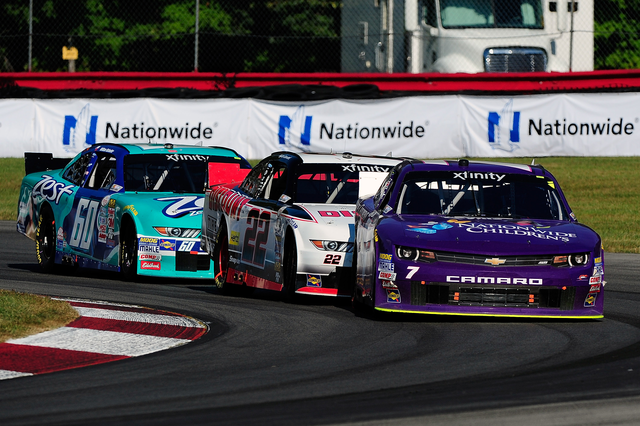 Points leader Buescher with his fourth place finish still has a 24 point lead over Ty Dillon and 25 over Elliott and now with his win, Smith is now 51 back.

The average speed of the Nationwide Children’s 200 was 67.493 mph with 8 caution flags for 25 laps.  There were eight lead changes among six drivers with Tagliani heading the pack for a race leading 38 laps. 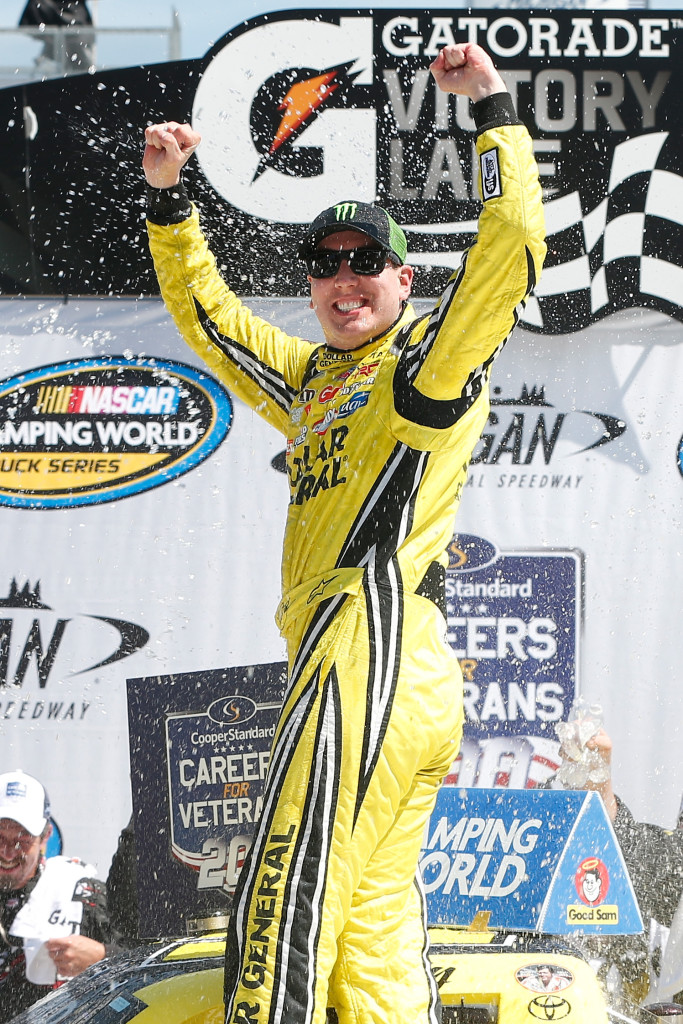 Caught for speeding after an early caution flag, Busch pushed his way back to the front, repelling Blaney after the last restart and fighting off Kyle Busch Motorsports teammate, Eric Jones for position.

The victory was Busch’s first at MIS after four runner-up finishes in the series, and it was his second in two Truck starts since returning from an injury that sidelined the driver of the No. 51 Toyota from all racing activity from Feb. 21 through mid-May.

“First win for me, first win for KBM here,” said Busch, who won for the 44th time in the Truck Series.  “I loved racing with those guys up there—Jones, Blaney and Dillon.  It was pretty hectic on how all that was going to shape up and play out…

“Just cool to finally get that monkey off my back here in the Truck Series and notch another race track where I’ve won in all three divisions here at Michigan.”

Earlier in the day, Busch had spun and damaged the front end of his Sprint Cup Toyota within minutes of the NASCAR final practice session forcing the Joe Gibbs Racing team to a backup car starting at the rear of the field in his Sprint Cup ride. 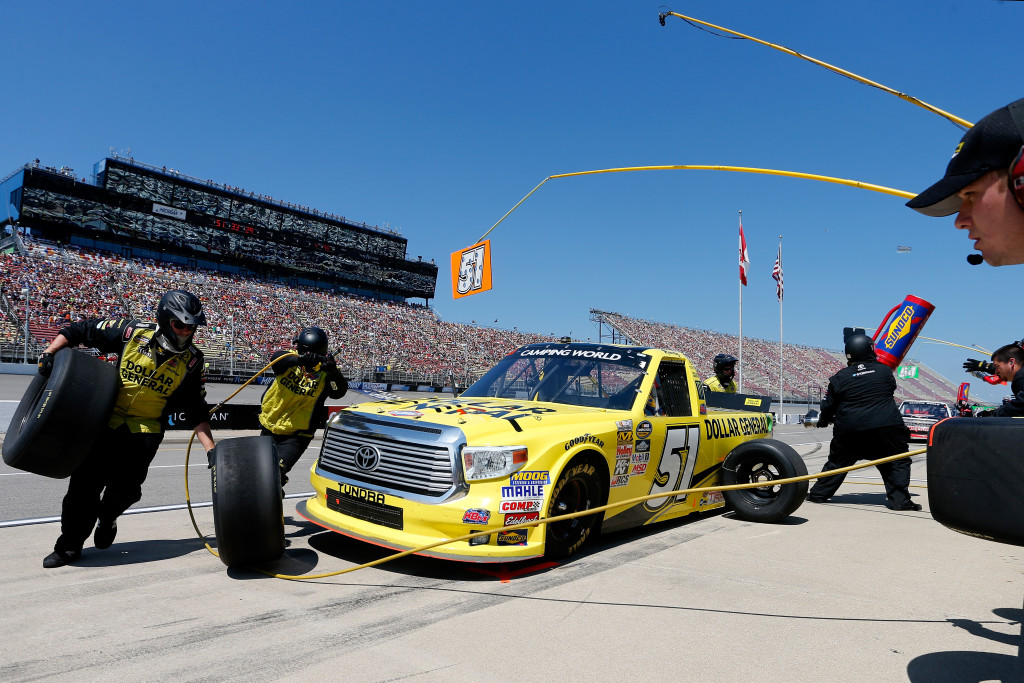 Matt Crafton recovered from a late race tangle with John Wes Townley that nearly took him out of the race finished in sixth shaving three points on points leader, Tyler Reddick (9th).  He trails the Reddick by eight points and Erik Jones in third is nine points behind.

The average speed was 128.940 mph with six caution flags for 26 laps.  There were 15 lead changes among six drivers with Kyle Busch leading the most for five times for 44 laps.