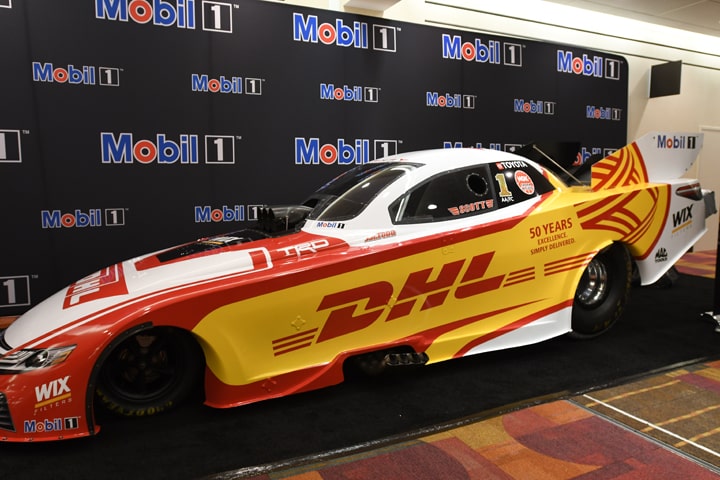 Lubricant manufacturer ExxonMobil, which has tentacles in Formula One, NASCAR and IMSA sports car racing, has been absent from the drag racing world for almost three decades. The company is returning to the NHRA drag racing wars in a big way, partnering exclusively with Kalitta Motorsports’ three 2020 challengers: Doug Kalitta in Top Fuel, 2018 Funny Car champion J.R. Todd and 2013 Top Fuel titleholder Shawn Langdon, who currently drives a Funny Car for the team.

After substantial testing of newly developed Mobil 1 products, a multi-year partnership was forged that will give Toyota Racing Development (TRD) partners Kalitta Motorsports exclusive use of a newly developed Mobil 1 drag racing motor oil, along with other lubricants. Mobil 1 will also provide engineering support throughout the season as its parent firm, ExxonMobil continues to develop next-generation lubricants to improve engine and gearbox performance.

In a competitive landscape like NHRA Mello Yello nitro-based racing, lubrication is a major factor between winning and losing. Kalitta Motorsports’ general manager Chad Head believes the alliance will give the company a head start for the coming season. “We are thrilled to announce this new agreement and be part of the return of Mobil 1 to NHRA,” he said. “The Kalitta team, led by Connie Kalitta for more than 60 years, has pushed the boundaries of innovation in motorsports.

“We have been working closely with the Mobil 1 team to develop, test and prove an innovative new range of lubricants for our race cars. Our goal is to win a championship,” Head continued, “and we’re excited to partner with Mobil 1 and their team of engineers and scientists, to help us get there.”

In addition to Todd’s 2018 Funny Car title with Team Kalitta, Doug Kalitta cemented his reputation as one of the most competitive Top Fuel racers of this generation, racking up a second-place result – his fifth since joining the NHRA wars. In 2019 he took the runner-up spot by a mere three points. Mobil 1 is hoping to change those results and help the team’s Funny Car drivers to a 2020 title as well.

“NHRA is one of the most extreme forms of motorsports on the planet, and it is the perfect place to showcase the performance of our advanced Mobil 1 synthetic lubricant technologies,” said Kai Decker, global motorsports and sponsorships manager at ExxonMobil.

“ExxonMobil last competed in NHRA back in the 1990s. Our return to the NHRA is the result of a true development and competition partnership between TRD, Kalitta Motorsports and our Motorsports Technology team at ExxonMobil Engineering and Research Company (EMRE).”

TRD has experience working with ExxonMobil through its championship-winning NASCAR teams, and is looking to enhance its status in drag racing – and likely its other racing entities – with this Kalitta Motorsports/Mobil 1 partnership. “All of us at TRD are pleased to see a great technology partner in Mobil 1 join forces with a great Toyota team – Kalitta Motorsports,” said Tyler Gibbs, TRD general manager.

“Having our talented group of TRD engineers working alongside the scientists at Mobil 1 on continued improvement in NHRA is exciting for everyone involved, including the NHRA. We’ve seen great things come from this partnership on the track in NASCAR and look forward to seeing more race wins and championships on the horizon for all parties,” he said.

The 2020 NHRA Mello Yello Drag Racing Series kicks off with the 60th annual Lucas Oil NHRA Winternationals, February 6-9 on the Auto Club Raceway at Pomona dragstrip. This past season, Doug Kalitta neatly bookended the Top Fuel season by winning both the Winternationals and the World Finals held on the seminal California dragstrip.