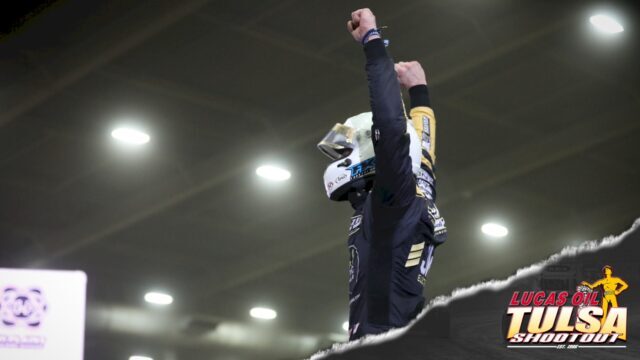 As the long-awaited New Year began to finally dawn in this country, one driver has already been given a reason to celebrate after earning his first Golden Driller at the 2021 Lucas Oil Tulsa Shootout. While the driver known as the California Hot Shoe was one of six first-time winners to earn victories at this event, the name Mitchel Moles is sure to be remembered in the history books at Tulsa, Oklahoma’s River Spirit Expo Raceway after driving to Saturday night’s 55-Lap Winged Outlaws feature.

After starting in the eighth position, the young driver who no one seemed to see coming raced his way to second within the final 12 laps after he and Jonathan Beason went after current race leader Joe B. Miller down the back straightaway following a single-file restart.

Although Beason would give Moles one heck of a battle for the win, a debris caution on Lap 51 would give Moles the chance to race to the lead and take this domination, despite all the way to his first Lucas Oil Tulsa Shootout victory.

“Honestly, I think myself and my team were all pretty speechless, but all these guys and myself have worked hard to be able to put our self in position to win and we did just that,” said Moles.

Along with this race, the 36th annual Lucas Oil Tulsa Shootout saw a total of 296 races contested over four days with 364 drivers now accounting for 596 Tulsa Shootout victories. Stay tuned to RacingJunk.com for the latest racing news straight from the dirt in 2021.