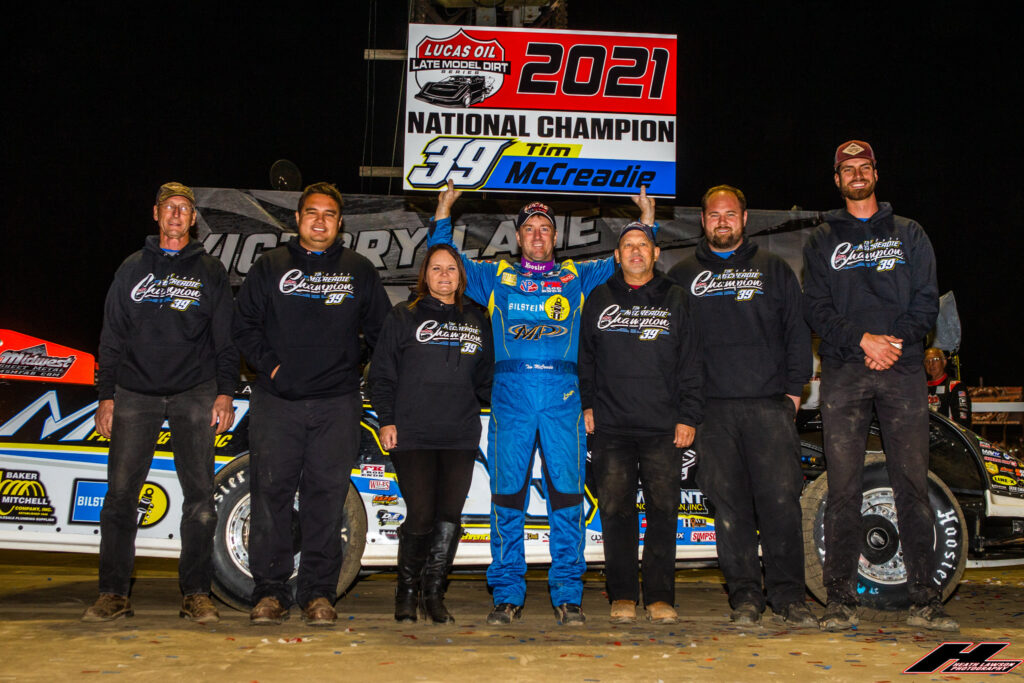 The 2021 racing season has been one to remember for the newest member of the Lucas Oil Late Model Dirt Series Champions club, Watertown, NY’s Tim McCreadie.

McCreadie locked up the Series title with one weekend to go while racing in Georgia. That allowed him and his team to enjoy the final event of the season for the Series with no pressure, the Dirt Track World Championships (DTWC) at Plymouth Raceway Park.

“Winning the Lucas Oil Late Model Dirt Series championship has always been a goal of mine,” McCreadie said. “I am really proud of this accomplishment. The support I receive from Donald and Gena (Bradsher, McCreadie’s car owners), this entire team and all of our partners is a big part of our success on track.”

Saturday night, McCreadie put a cap on his championship season with a solid fifth place run in the DTWC. He ended up winning the title by more than 500 points over his nearest competitor, Martinsville, IN’s Hudson O’Neal.

It’s been a real amazing year for us,” he said. “We didn’t get as many wins as I would have liked, but to be this competitive has been a great feeling.”

Over the last few seasons, McCreadie has been working very closely with the Bilstein Shock company. This was not only to improve his performance but also to make Bilstein better as a whole.

“Teaming up with Bilstein three years ago was one of the best decisions I’ve made as a driver,” he said. “Looking across the pit area, seeing so many of their customers and knowing I played a part in building this success makes me so proud.”

For their part, Bilstein’s admiration of McCreadie is mutual.

“We are proud to support such a dedicated and ambitious racer like Tim,” Aaron Morey, head of Motorsports at Bilstein said. “We look forward to even more success in seasons to come.”

This is McCreadie’s first championship on the Lucas Oil Late Model Dirt Series, but not his first in Late Model competition. The former DIRTcar Modified star made the switch to Late Models full-time in 2004, winning the World of Outlaws Late Model Series Rookie of the year. He then nailed down the Series title two years later in 2006.