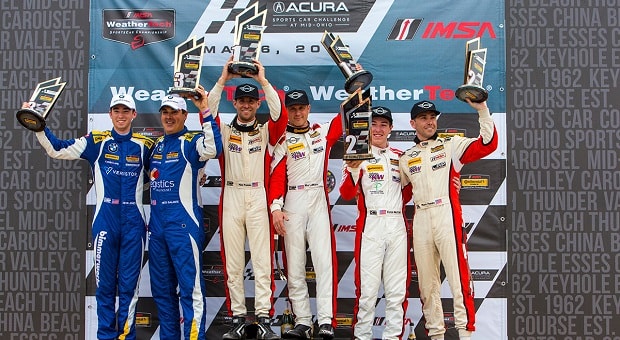 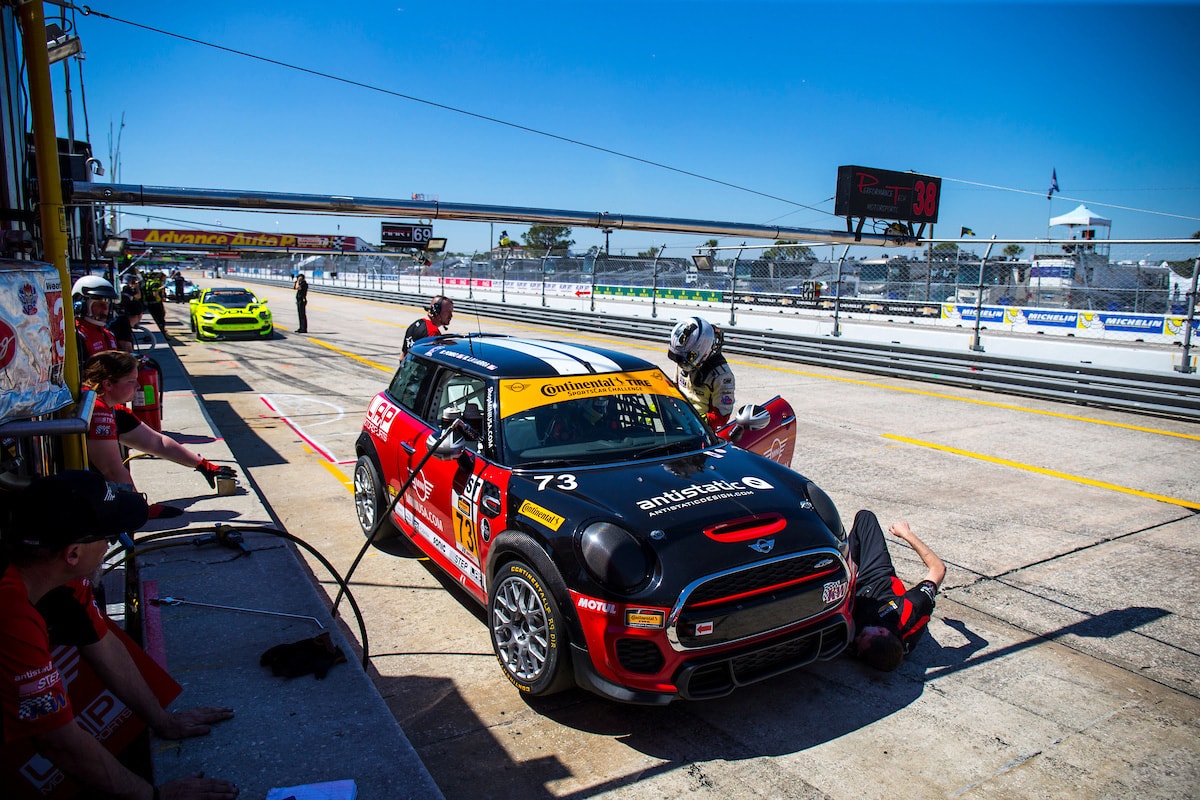 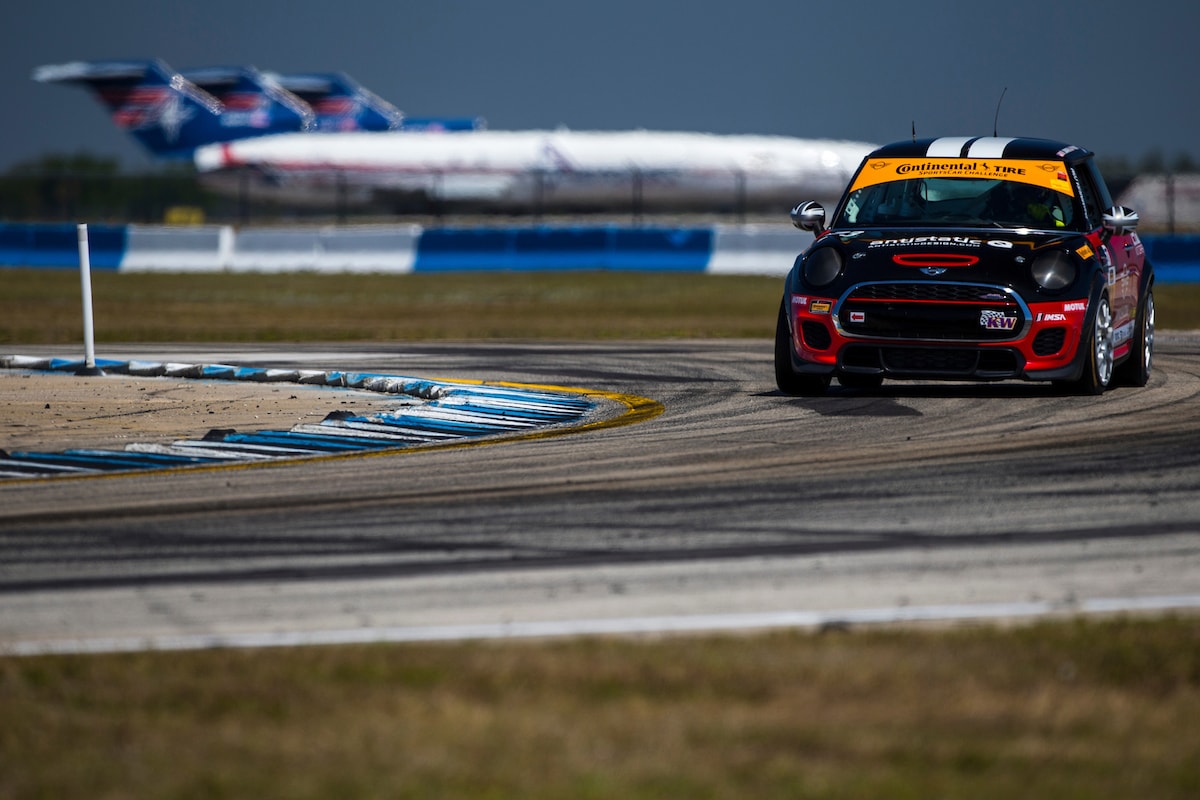 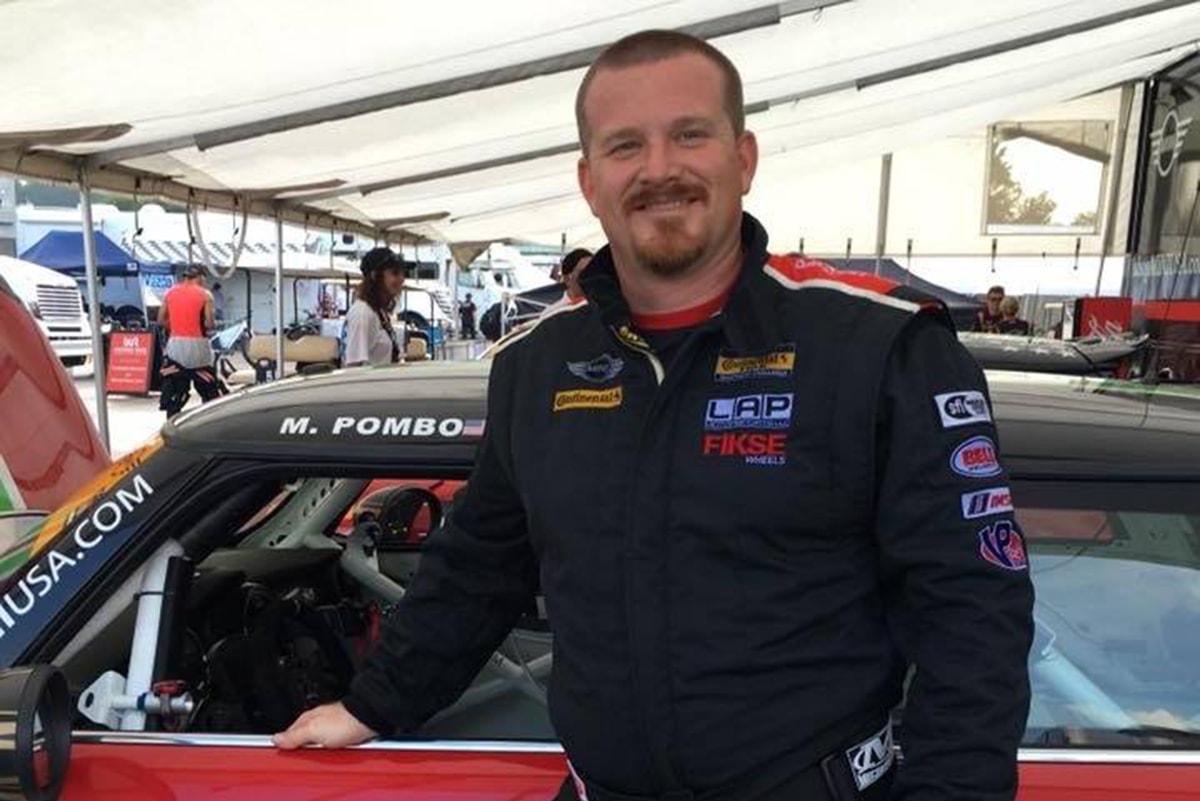 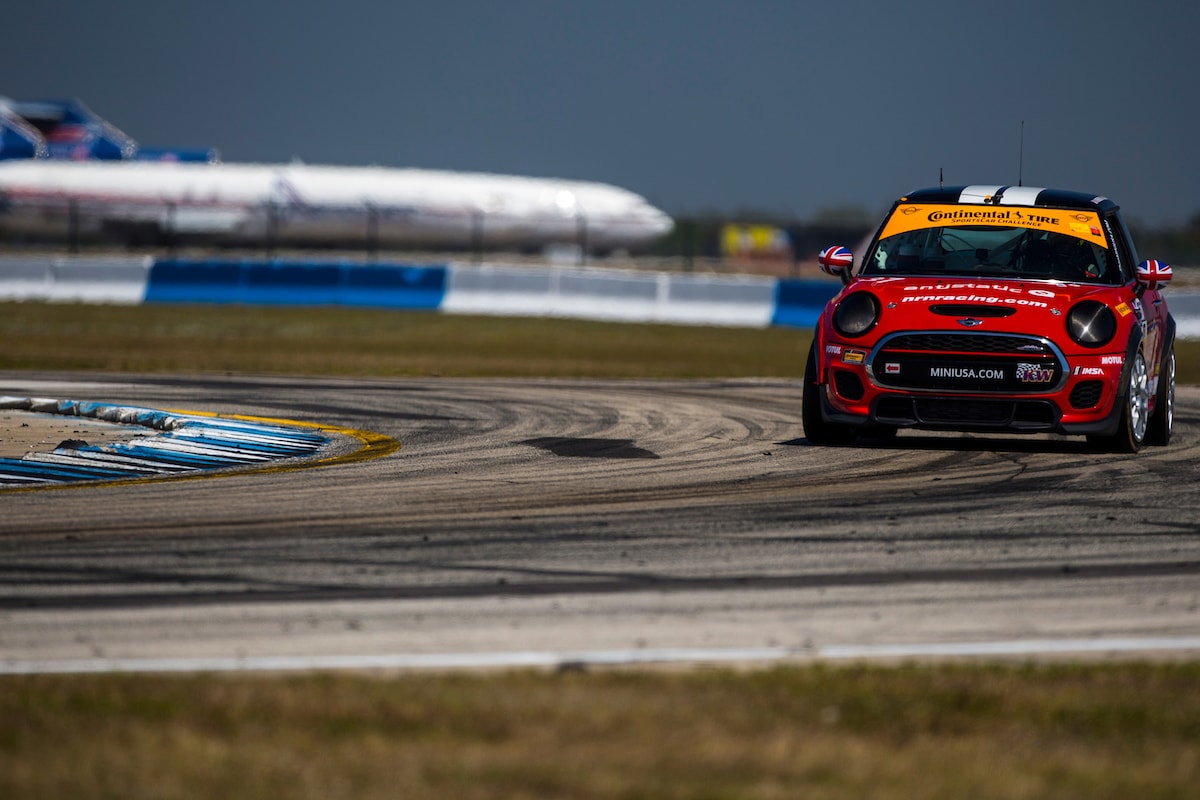 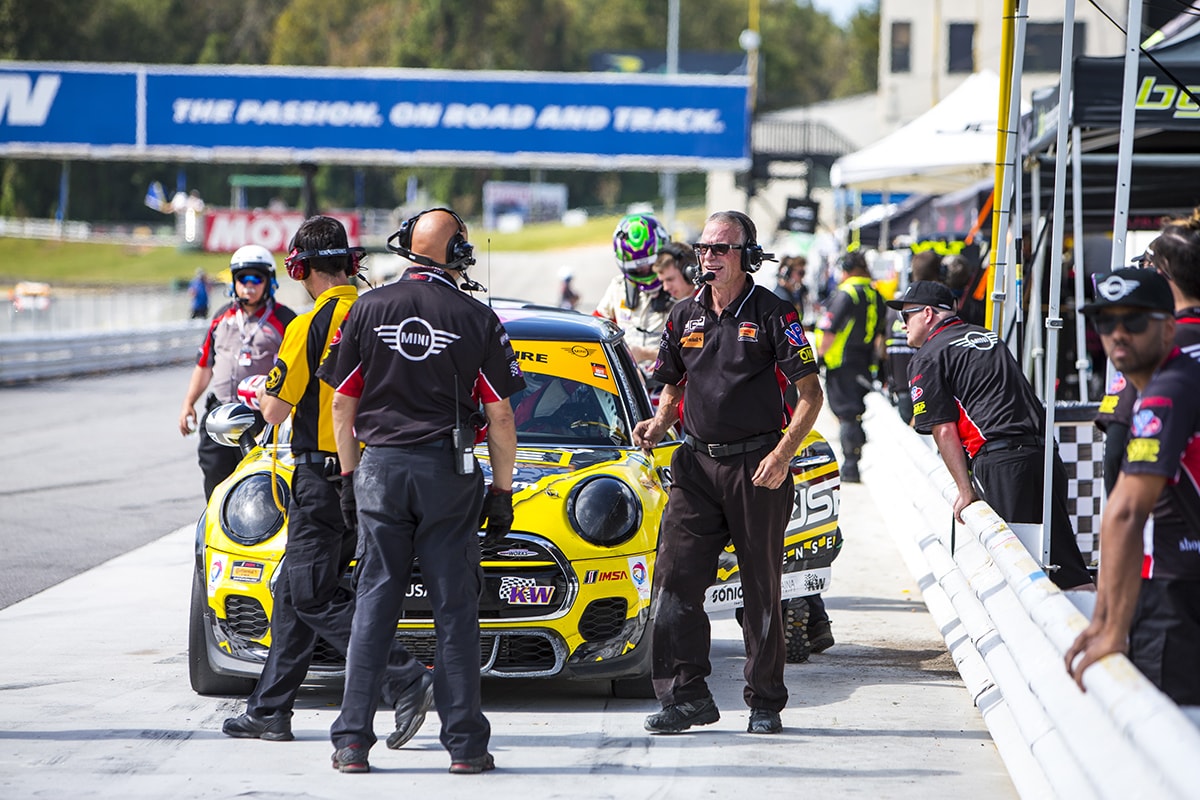 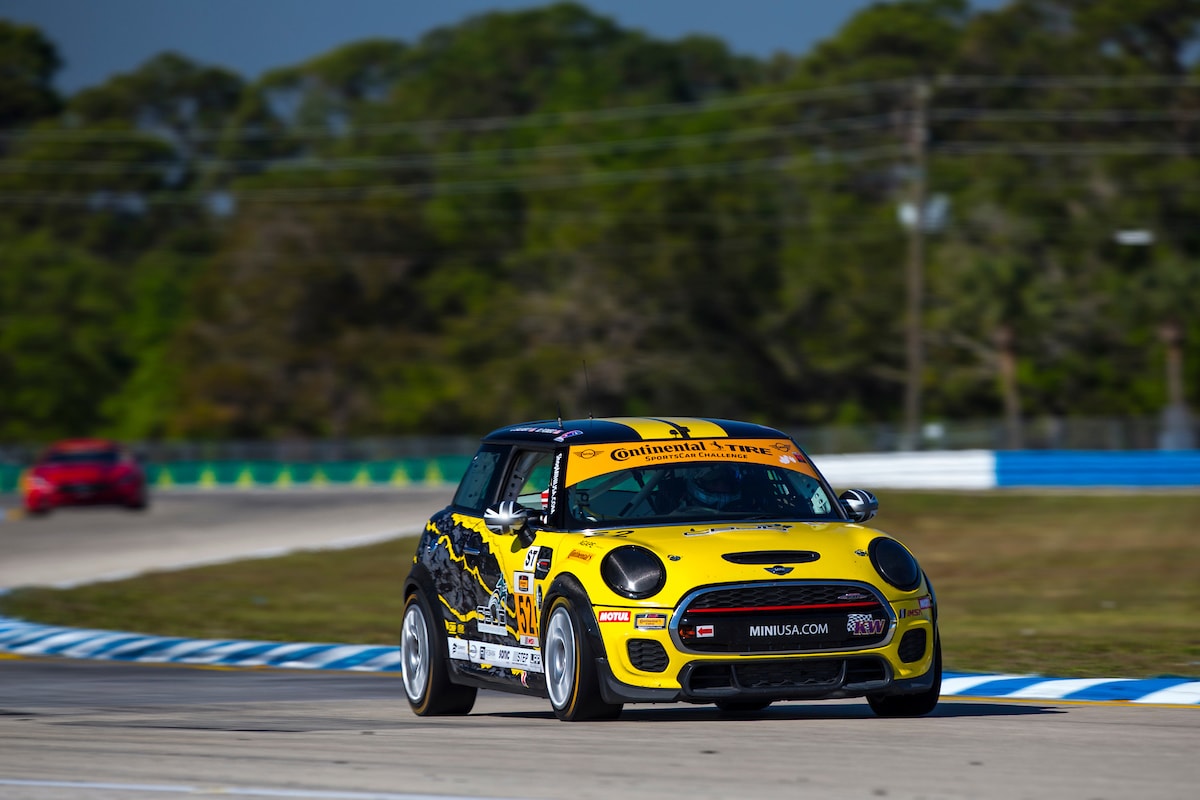 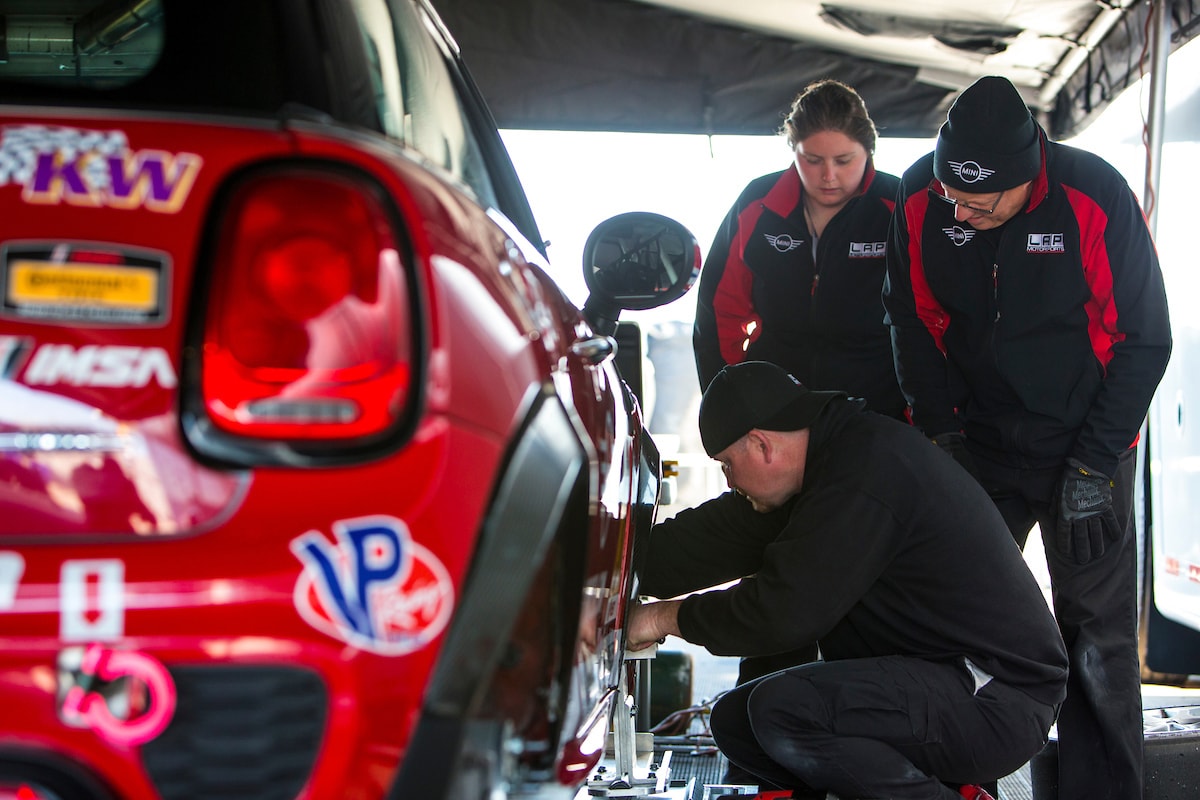 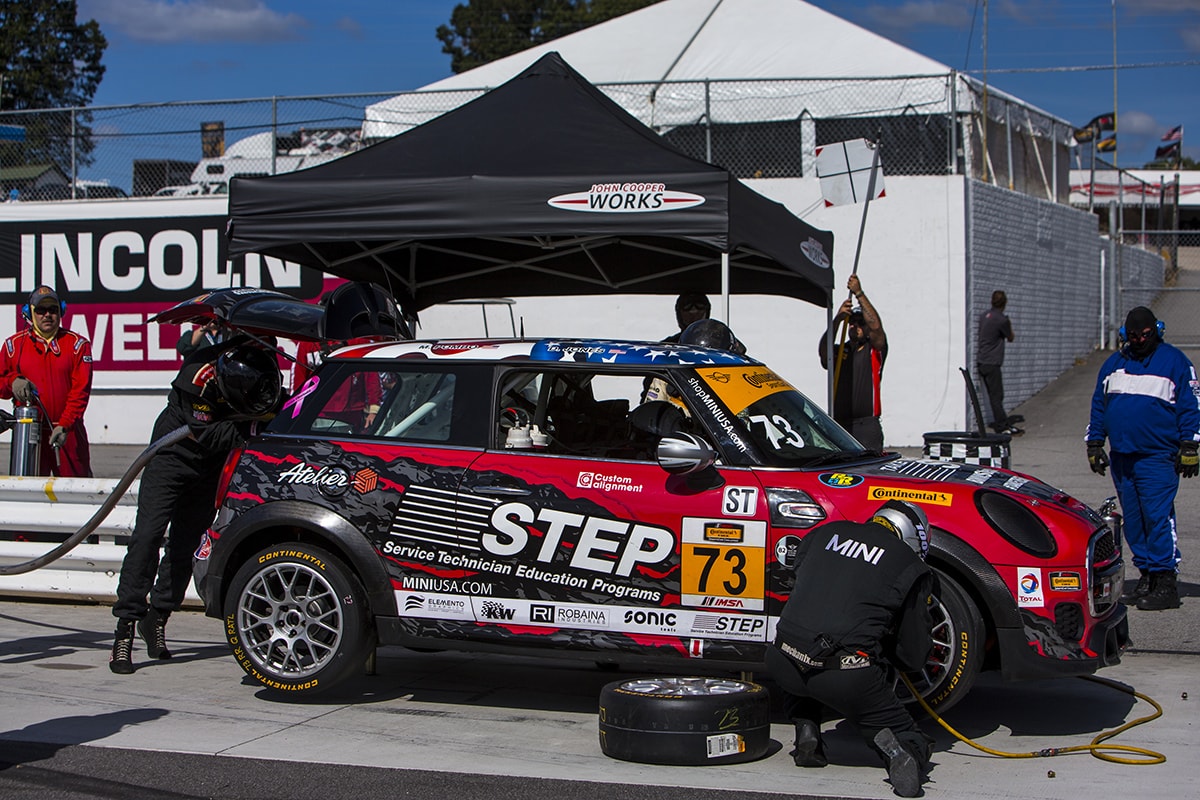 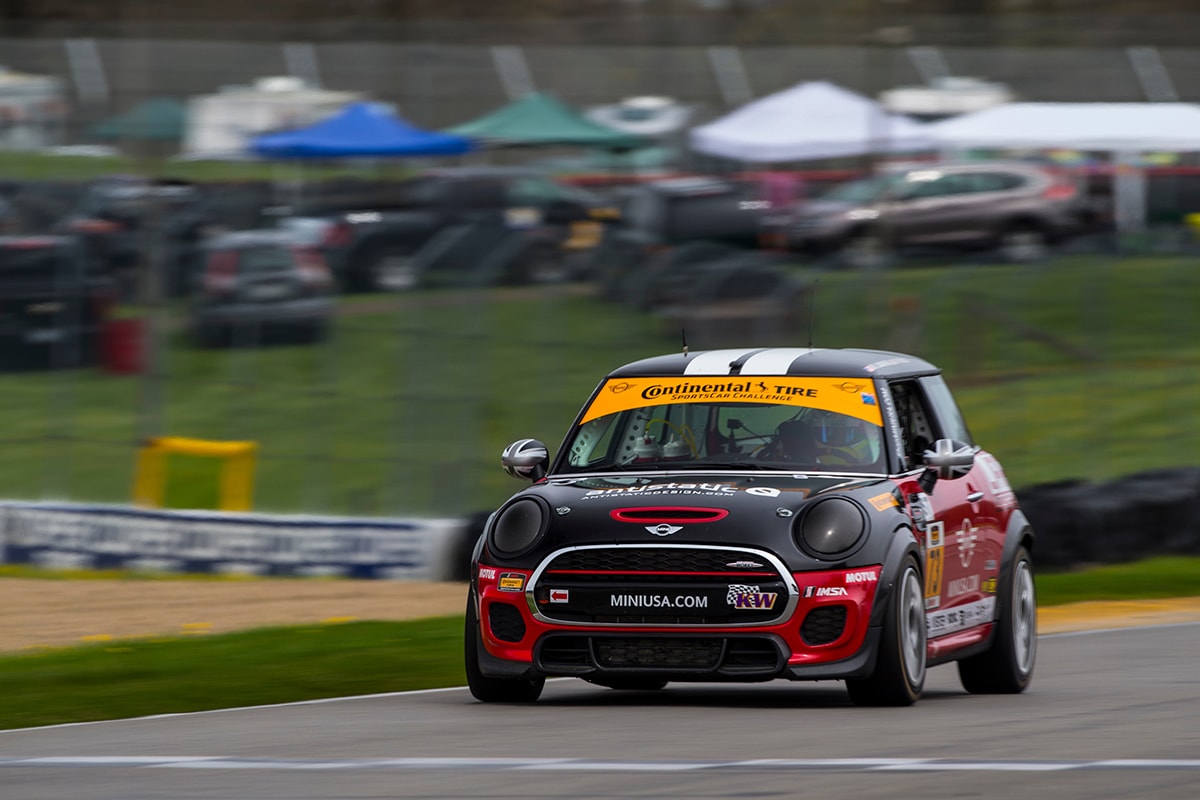 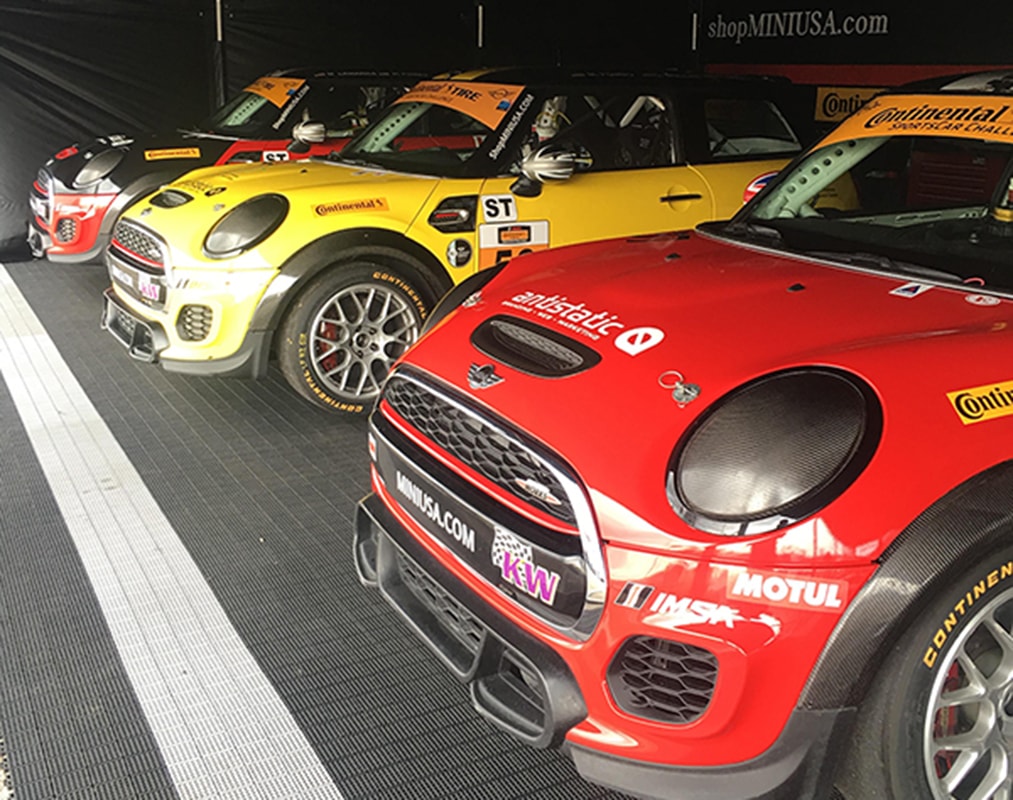 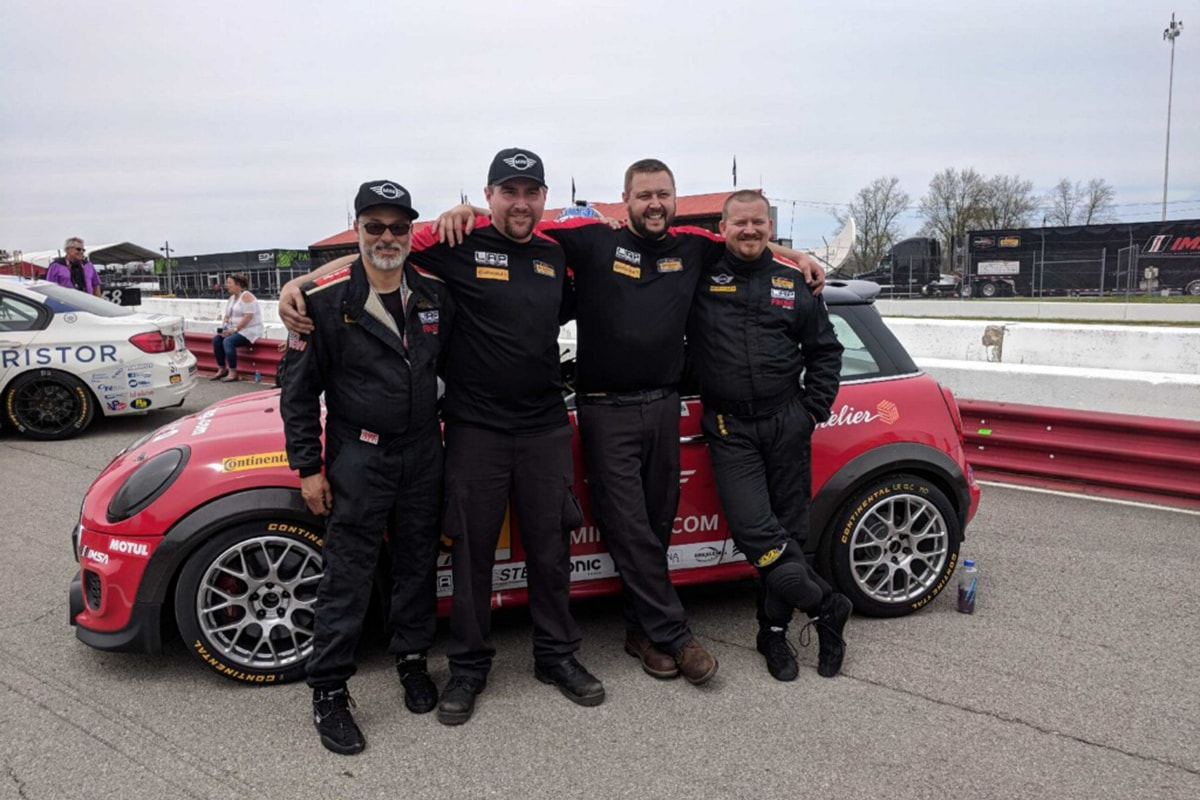 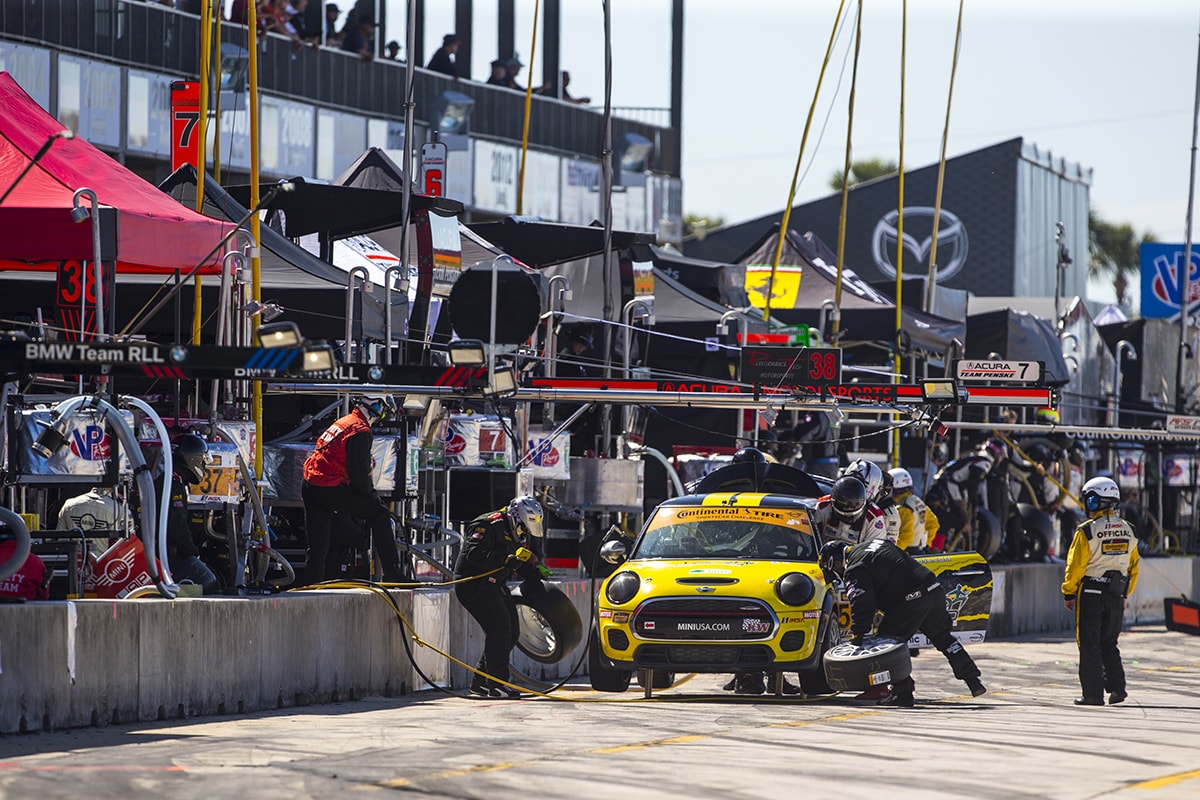 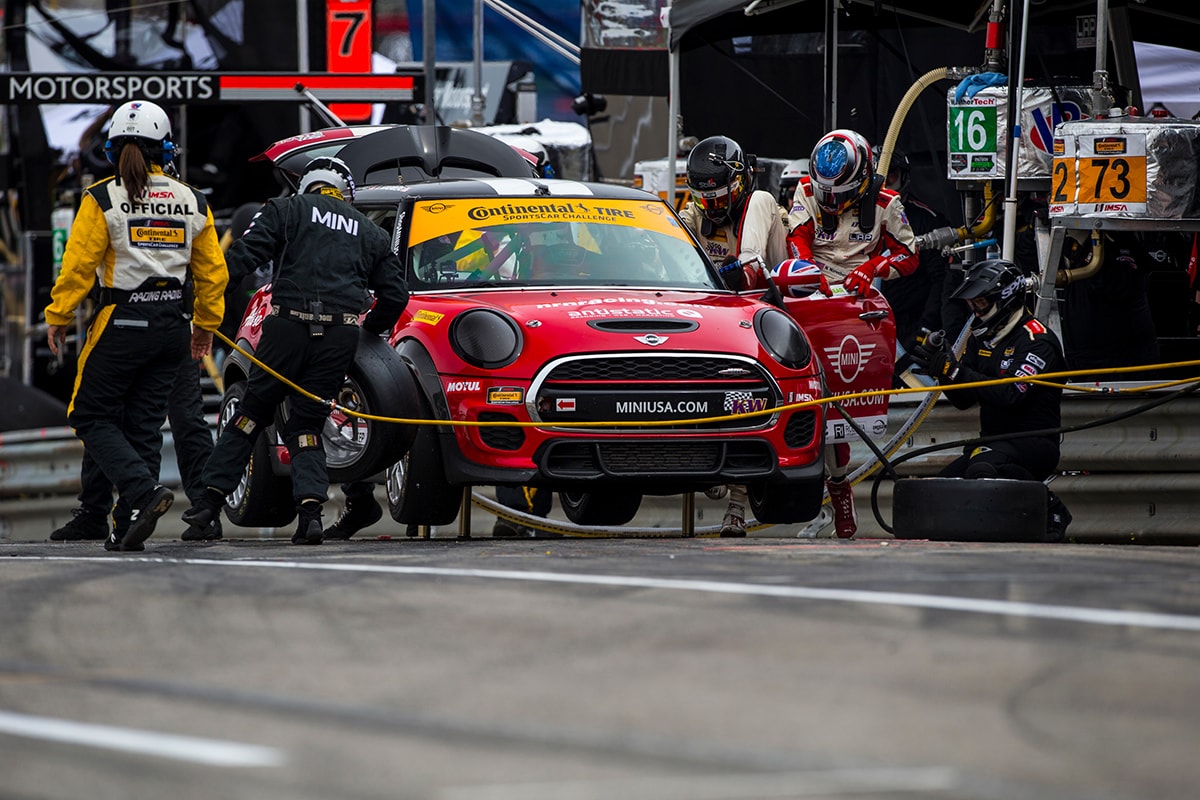 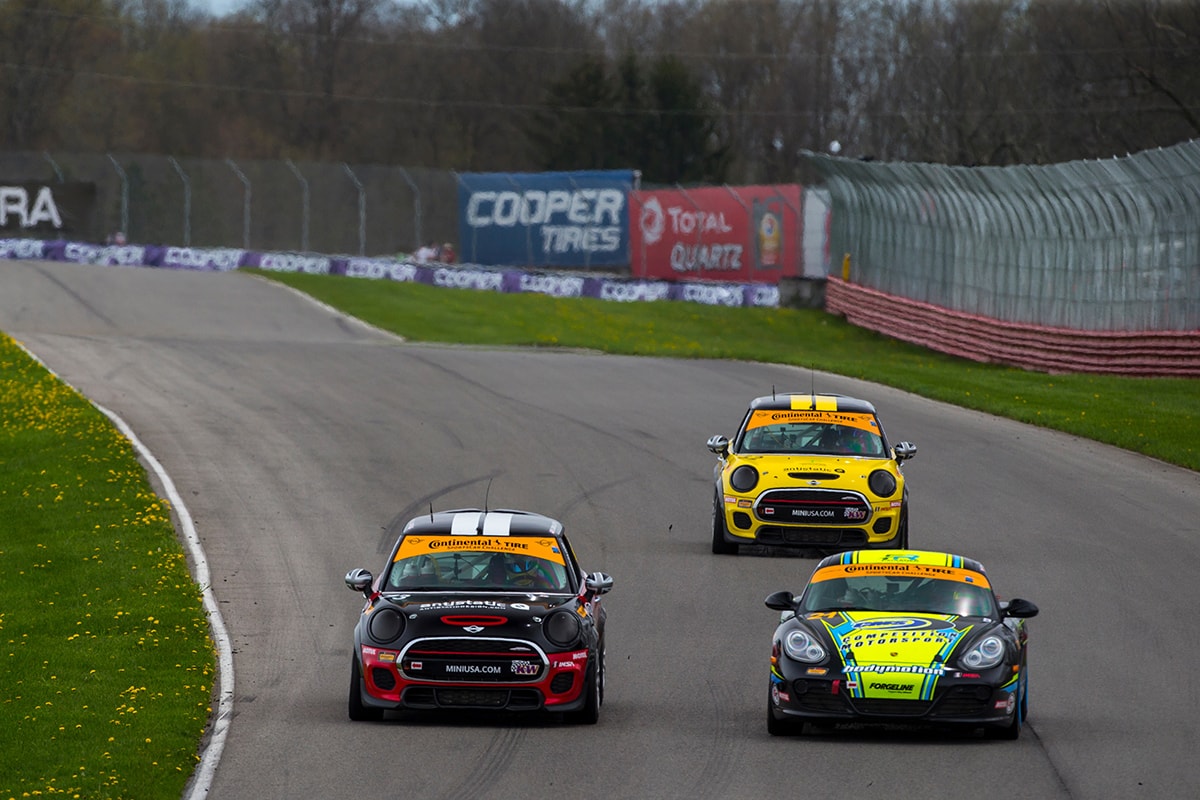 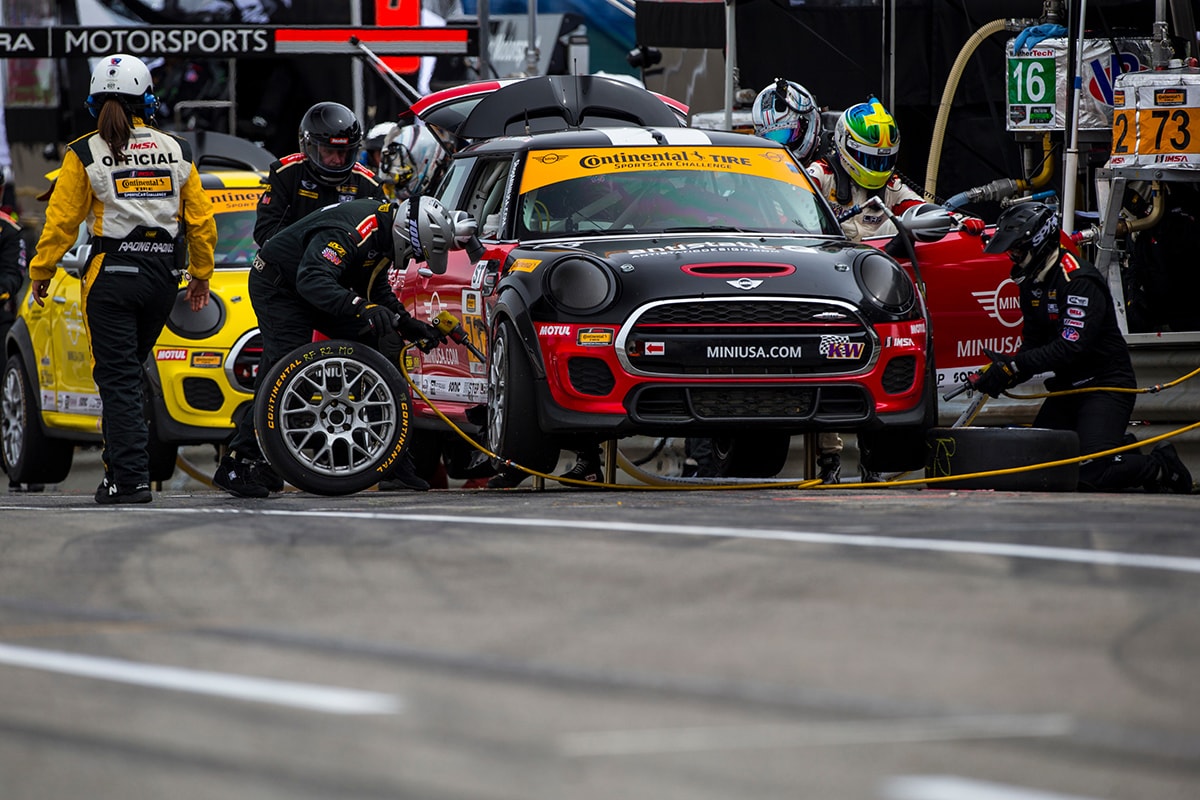 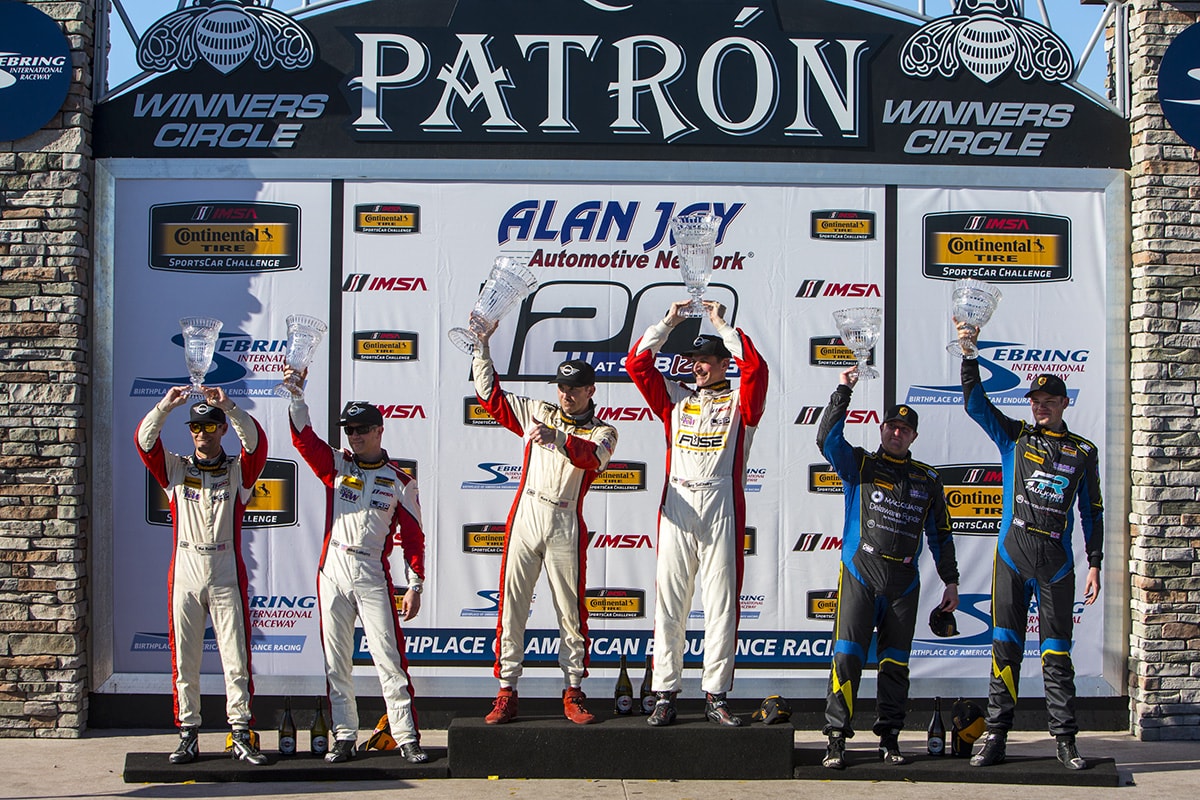 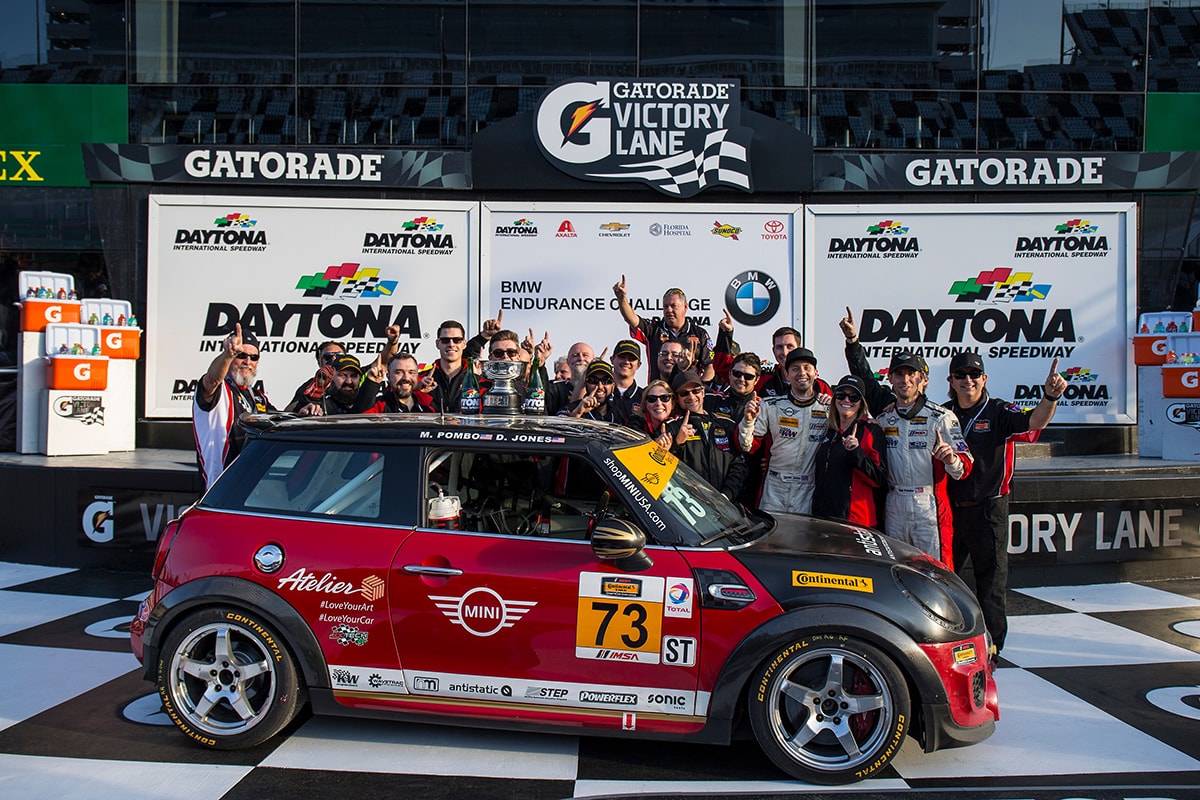 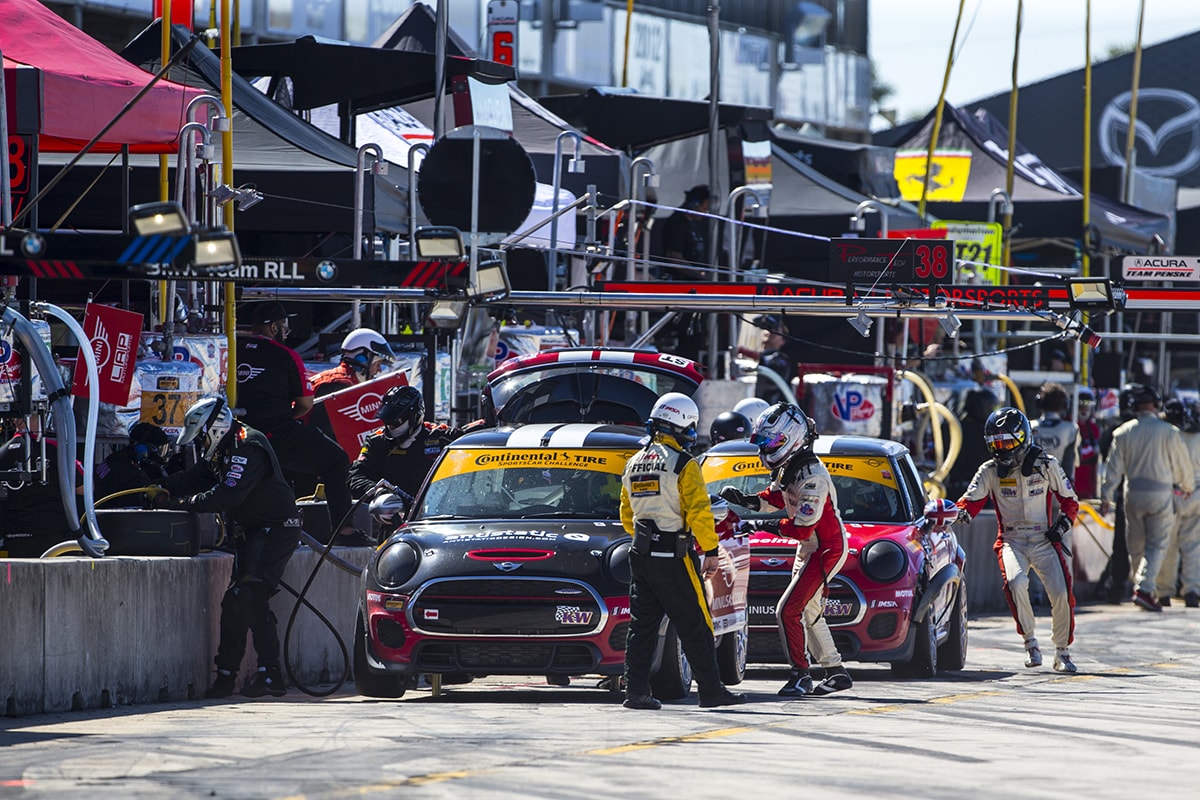 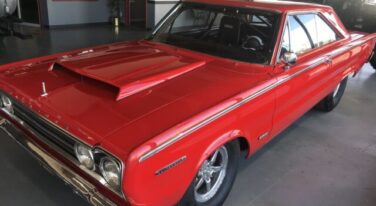 MINI USA and the MINI JCW Team are three races into the IMSA Continental Tire SportsCar Challenge Series, and so far it’s been an excellent season with a recent two podium showing.
Most recently the series raced at Mid-Ohio in the Acura SportsCar Challenge, and the team continued its run of success with another one-two finish. This time the Mat Pombo and LaMarra Number 73 took the class checkers while the 52 team of Mark Pombo and newcomer Colin Mullan trailed them in second. The 37 team of Norenberg and Jones overcame a broken axle while in the lead after battling from the back to the front to finish fifth in class.
Luis Perocarpi, the owner of LAP Motorsports (the parent team of JCW MINI) said after the Mid-Ohio race, “I am so proud of everyone on this team and their ability to stay focused on being the best team on the track every week. Our drivers did a phenomenal job out of the track. Our engineers Brad Moase, Zdravko Miric, Bill Stoddart and lead engineer Rob Ridgely called a perfect race and our MINI technicians made it happen on pit road and in the paddock.”

Those MINI technicians join the team via the BMW/MINI STEP Program, a partnership where techs from local dealerships fill out the pit/paddock crew.
Nate Drake is a technician at Cincinnati MINI and has been working with the MINI JCW Team for three years now. Here he is prior to a recent race at mid-Ohio.

The “pits” in the IMSA Continental Tire SportsCar Challenge Series aren’t exactly like those in most other sports. The series is an endurance challenge. The goal is to maintain the highest average speed over the length of a 12- to 24-hour race. A NASCAR or F1 race doesn’t allow drivers or crews the time to do things like change engines, transaxles or major suspension components However, the length of an IMSA races means that sometimes these swaps are essential to remaining in the race.
This is where the cooperation between MINI USA, the MINI JCW Team and local dealerships comes into play. The team will determine how many local techs they need from each dealership and the dealership is asked to select their best technicians, most of whom are STEP Program graduates, to meet them at the track. Usually six techs are requested per race, but they have had as many as 11 techs at a race at Laguna Seca.
The BMW/MINI STEP program has two major qualifications for applicants: they must have completed a qualified course of training and have a dealership sponsor them into the program. They also have to have the ability to support themselves during the training period of several weeks.
Both UTI and Lincoln Tech offer qualified programs and are thought of as two of the best schools in the country for automotive techs. They’re both certified by every major manufacturer, so what can the STEP program offer participants and those that hire them? Specialization. Focused specialization. When a technician finishes the program they will know the MINI product line as well as those who designed it, if not better.
A car is worked on in the paddock area.

So how do the techs get chosen? MINI North America Events Specialist Tony McGardny, liaison between the team and MINI North, reaches out to dealerships in a region to see if they have any qualified techs that wish to help out the MINI JCW Team at a race in their area a couple of months before the race hits town. McGardny leaves the selection of the technicians to the individual dealerships, although she does specify how many techs will be needed.
MINI dealer techs work in the pits during the race at Mid-Ohio.

The first dealer tech on the pit crew occurred at a race at Road America in 2015. “It was a unique situation that created the opportunity between us and MINI USA,” explains Wendy Doyle of the MINI JCW Team.
But the interaction has been extremely beneficial to all parties. “The team is excited about continuing this regional dealer tech involvement at least through the end of this racing season,” says Doyle. “Because we compete with almost stock street cars, the technicians bring knowledge of the cars that our race mechanics sometimes don’t have.”
This photo shows the three MINI JCW Team cars in their shared paddock area prior to the race.

Cincinnati Mini Shop Foreman Nate Drake has been working with the MINI JCW Team for three years now. Drake and three of his most motivated techs most recently worked in the pits at Mid-Ohio, supporting all three MINI JCW teams. Nate was one of the techs who replaced the blown axle/CV Joint on the Number 37 car.
Nate and other members of the team.

“The team manager will take some time to watch how the various techs are doing in the days and hours leading up to the race and decide from there what each person on the team, including the techs, will be assigned to do during the race,” explains Drake.
The tech might remain in the MINI JCW paddock/service area to deal with damaged cars or be assigned to fuel the car or to change tires during pit stops. “If you’re chosen to be one of the over-the-wall pit crew members,” Drake explains, “you’re dressed up in a firesuit and a helmet is tossed on your head.”
Nate feels that he and the other dealership techs are an integral part of the team at the track. Knowing exactly what bolts to take out in what order to swap out an engine in less than five hours, versus not and requiring eight to ten hours to swap the engine is, according to Drake, “A dream come true for Luis (the team owner).”

While the dealer techs bring a depth of knowledge about the vehicles and parts, they aren’t trained pit crews, and sometimes the difference between the two worlds is palpable. Drake recalls a race where one tech couldn’t deal with the pressure and stress of the work and just left. It’s rare, but it happens.
More of the techs are like Drake, who watched videos of his pit stops at Mid-Ohio to see what he could do to improve his work with the team. If someone is needed to completely replace a car’s front-end as quickly as possible and feels Drake can handle the job in the time frame the team needs, he wants to be prepared.
Back to Post
About Mike Aguilar 388 Articles
Mike's love of cars began in the early 1970's when his father started taking him to his Chevron service station. He's done pretty much everything in the automotive aftermarket from gas station island attendant, parts counter, mechanic, and new and used sales. Mike also has experience in the amateur ranks of many of racing's sanctioning bodies.