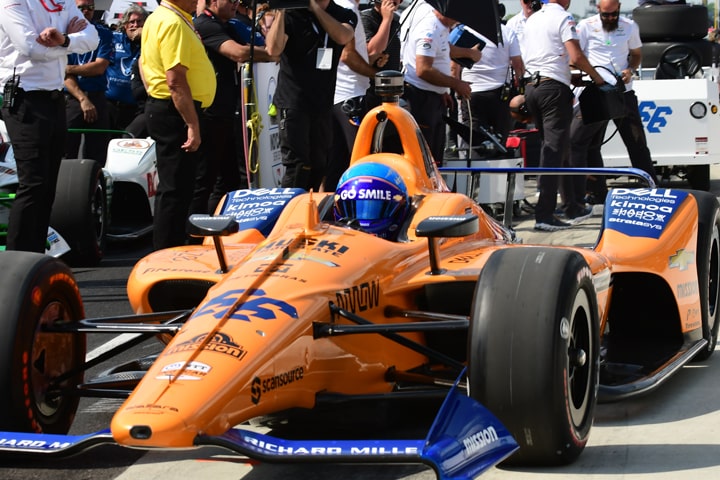 McLaren is returning, full-time, to NTT IndyCar Series competition in 2020. After an excellent 2017 affiliation with Andretti Autosport that saw its [then] two-time Formula One championship driver Fernando Alonso secure a top-nine start and rookie of the year honors, McLaren Racing CEO Zak Brown’s appetite for Indy car racing was firmly whetted.

McLaren, of course, is more than an F1 team. The company manufactures exotic automobiles (the USA is their largest market) and also provides electronic support to both manufacturers and racing entities through its McLaren Applied Technologies, whose products are used by INDYCAR.

The team’s second foray to Indianapolis this past May, following its very public and acrimonious divorce with Honda at the close of the 2017 F1 season, was an abject failure. McLaren, who formed an alliance with Carlin, was unprepared for all aspects of the 103rd Indianapolis 500 Mile Race and proved incapable of qualifying its Chevrolet-powered papaya orange Dallara, again with Alonso at the wheel.

McLaren subsequently packed their tents, folded their immense hospitality unit and returned to their Woking, UK home base to assess the failure and learn from it. That’s what occurred publicly, but in the background, Brown and McLaren were making their plans for a return – a full-time return – to Indy car racing in 2020. The team last had a full-time presence at the pinnacle of American open-wheel motorsport in 1978.

This time McLaren Racing has allied with Arrow Schmidt Peterson Motorsports (Arrow SPM) and, of course, Chevrolet, intending to compete in every Indy car race next season. This partnership will entail a renaming of the team – Arrow McLaren Racing SP – for a two-car entry. The move changes the balance between Chevrolet and Honda teams for the foreseeable future, as Schmidt Peterson Motorsports have been stalwart Honda partners, with driver James Hinchcliffe a spokesman for the auto maker’s brands.

McLaren Racing will work under the auspices of sporting director Gil de Ferran, a two-time Indy car champion (2000-2001) and 2003 Indianapolis 500 winner while driving for Team Penske. De Ferran will work independently of the Formula 1 team. McLaren Racing will utilize infrastructure put together by Arrow SPM over the past near-decade with Arrow Electronics as the team’s title partner, while both Sam Schmidt and Ric Peterson continue in their current roles.

Shortly after McLaren Racing released their news the second Friday of August, Honda Performance Development (HPD) made known their response to Arrow SPM’s change of partnership, allowing the team to leave despite having a contractual obligation for the 2020 INDYCAR campaign.

“HPD is proud of its numerous accomplishments in partnership with Arrow Schmidt Peterson Motorsports, which include all seven of the team’s NTT IndyCar Series victories to date, as well as two coveted pole positions for the Indianapolis 500. Although we regret that this partnership will be coming to an end in advance of the 2020 season, HPD has the utmost confidence in the strength and commitment of its remaining partner teams, all of whom have won at least one NTT IndyCar Series race in each of the past two seasons. We look forward to demonstrating that same type of depth across our entire lineup for many years to come,” HPD stated.

McLaren Racing’s reentry into America’s top open wheel series is a nod to its past. “IndyCar has been part of McLaren since our early years of racing,” said Brown. “The series today provides not only a commercial platform to continue to grow our brand in North America, but competition with some of the best teams in international motorsport”

This year Brown enticed Arrow Electronics to join the F1 McLaren team and the partnership has been beneficial for both, he said. “I am absolutely delighted that we will expand our relationships with Arrow Electronics across both F1 and INDYCAR, while renewing our long affinity with Chevrolet as our engine partner. McLaren and Chevrolet have a special history together in North America, and it is fitting they are part of our full-time return to INDYCAR,” Brown acknowledged.

In its early years, McLaren was a force in the CanAm sports car challenge, using Chevrolet power. “Chevrolet and McLaren have a storied history of racing together, going back go the mid-1960s,” acknowledged Jim Campbell, US vice president, performance and motorsports for Chevrolet. “We have always had tremendous respect for Zak Brown and Gil de Ferran, as well as for Sam Schmidt, Rick Peterson and Mike Long (chairman, president and CEO of Arrow Electronics).”

There are some loose ends in the Arrow SPM/McLaren Racing agreement. There were immediate questions about the future of Hinchcliffe, who nearly lost his life at Indianapolis Motor Speedway with a May 2015 crash the day after qualifying.

Newly-married Hinchcliffe set some of the queries to rest with this Facebook post a few hours after the team’s announcement: “It’s an exciting day for all of us with Arrow McLaren SP and the culmination of a lot of hard work put in by all. My love for motorsports started on this weekends watching F1 races with my dad and McLaren was a huge part of that. To be able to drive for that name is a dream come true.”

There are also questions about the fate of Meyer Shank Racing, which has a technical affiliation with Arrow SPM in INDYCAR and which races Acura GTD cars in IMSA’ WeatherTech SportsCar Championship, where it holds the points lead. The team will, should they continue to race with Honda, need to find a new technical partner, but Mike Shank, team owner indicated new plans are in the works and will be announced shortly. “I feel really good about how things are coming together, but we’ve just got to get everything final before making any announcement,” Shank told Racer.com.

In other INDYCAR news, Alexander Rossi has re-signed with Andretti Autosport, killing any thoughts of “musical chairs” among the top teams, while Conor Daly will reunite with that team for the season finale at WeatherTech Raceway Laguna Seca in September.