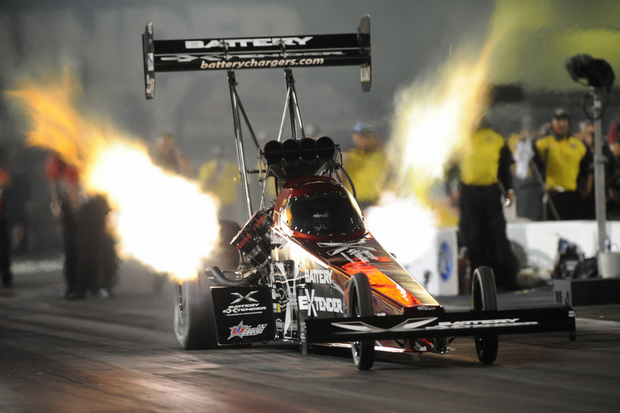 Spencer Massey says, “It’s all about winning the championship.” For last three NHRA Mello Yello Top Fuel countdowns, Massey has been directly in the mix, inches away from taking it all. This year, he’s reaching for the ultimate position.

The always enthusiastic Massey is more determined than ever to not let chances slip away this year, to work even harder so that he and his Schumacher Electric Top Fuel team can finally win their first NHRA championship.

“Right now, I can’t see that I want to change too much from what we’ve done because in the past three years this team has done exceptionally well.  We finished in the top five (in the points) all three seasons.  But we haven’t actually accomplished what we set out to do and the goal is to win championships.  Our pursuit on every level is in me, the race car, team and that means Todd (Okuhara) and Phil (Shuler).  Phil is my crew chief and Todd is the overseer of all of the Don Schumacher Racing cars in the organization.  It’s still his baby, still his car. We push our team, our chassis, and our crew to get every bit we can to the extent we can. “

Testing recently in Palm Beach, the normally front running Massey ran very productive elapsed times of 3.77 and 3.79 seconds, but despite the consistency, he knows there’s more to come.

“At Palm Beach we were testing different things, more or less to step up and try to run with the Al-Anabi cars, and to run with Tony (Schumacher) and Antron (Brown),” said Massy, the 14-time NHRA winner.  “Those two are running extremely well.  Tony ran a 3.76 in testing and Antron ran 3.73.  We only put together a string of 3.79s, but we’re testing some new stuff.  We’re getting to learn off these new parts.

“By doing what we’re doing in testing and trying different things now; that’s what it’s going to take.  If we stay status quo like we have the last three years, we’re not going to move forward in our sport. To accomplish what we want to and move forward we need to try new things, start innovating new things and that’s what a lot of great people have done in this sport like an Alan Johnson.  He’s been such an innovator in this sport.  That’s what Phil and Todd are trying to do as well.  We can design stuff ourselves and try and get this race car to perform like it should.  Hopefully it will outperform every other race car we line up against. “ 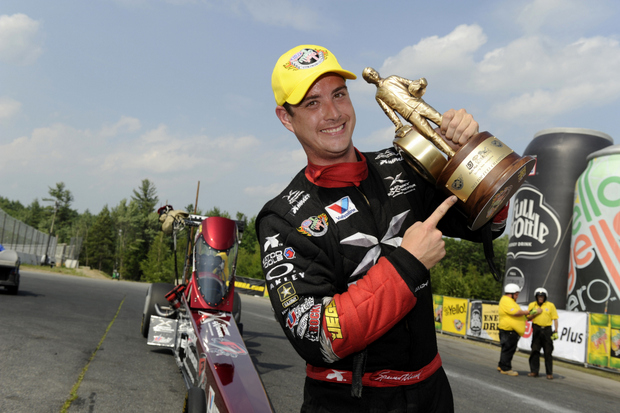 Massey has won 14 NHRA National Top Fuel events and in 2013 claimed four Wallys.  He finished second in the Mello Yello points in 2011, third in 2012, and fourth last year. In reality, the Schumacher Electric car is improving, but just not getting the breaks of the game.

“You can mess up one thousandths of a second and lose a race and then end up losing a championship,” sighed Massey.  “You could stay status quo and think your tune up and chassis and your parts are okay for all these other runs, well hold on.  After so long, you’re going to have someone come up with something better.   Something better might be faster and if it’s faster, you’re getting your butt kicked.  So that’s not going to work either.  It’s constantly evolving, constantly changing the sport.  You have to stay on top of it as a driver and as a crew chief.”

Massey was riding high by entering the Countdown No.2 and after  runner up finish after the first race at Charlotte, he held the points lead. Unfortunately, he suffered three first round losses later (St. Louis, Las Vegas and Pomona2) and two of those were in the last two races of the season, dropping him to No.4 in 2013.

“That’s pretty much the way it went after that,” said Massey, whose quickest ET is 3.728 seconds.  “It’s very uncharacteristic for our team and our race car.   But you look at the draw in those last two races and both were against Brittany Force.  Just goes to show you how every driver is improving because at the first of the year, we had her number in round wins.  Then the table turns and she starts beating us and that’s the situation that happens.  But then again, we found ourselves behind the eight-ball because we weren’t evolving fast enough and changing stuff fast enough where we should have been and that’s what’s we’re doing right now.  We’re trying to do anything and everything it takes looking at every option there is to turn the screws on every part of the race car to get it to run a little better.  Every pound counts, every thousandths of a second counts and that’s what’s its going to take to win the Mello Yello Top Fuel championship.” 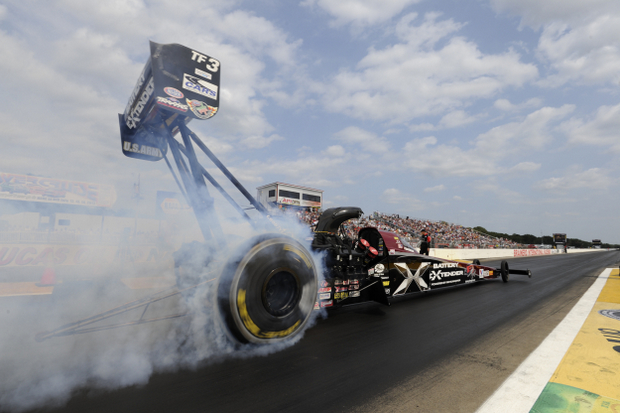 In 2009, Massey learned from some the best in the business under the guidance of Don ‘The Snake’ Prudhomme. Massey immersed himself in the business and the car and learned what to do and what not to do on and off the track.

“The Snake was a tremendous influence,” said Massey.  “We know Don Prudhomme loves to win whether he was driving a race car or as a car owner. He wants to see that car win.  He’s only lived and breathed drag racing his entire life, it all he knows.  Just saw him and the Mongoose (Tom McEwen) on Barrett-Jackson putting up his Hot Wheels cars and trucks for bidding with Rick Hendricks taking both of them home.  The Snake loves being around the sport of drag racing.  He’s a great guy in general just to have fun with and race.”

He’s more involved than ever and has a say in what the car needs and transfers that information over to crew chief, Phil Shuler.

“If the car shakes the tires or pulling one way, that’s pretty much my input,” expressed the 32-year old native of Ft. Worth Texas.  “Now if I can suggest something because I have been around these cars long enough working on them, even try to tune on them and so forth.  I do have some input on it.

“My job is to do it the same way every time.  Be the first off the starting line; make sure my fuel is exactly right every time.  I pack the chutes; make sure all the proper safety equipment is on board.  If my crew needs any help I can turn some wrenches and I’m not afraid to get my hands dirty.  Their job is to tune the race car and they do an awesome job or else I wouldn’t be in the top five three seasons in a row.

In preparation for the NHRA Mello Yello season, most drivers have a regiment for their personal fitness program.  In Massey’s case, he stays in shape by being in race mode 365 days a year.

“A lot of people in the drag racing world know how short our off season can be with testing in January,” Massey stated. “We just got back from a whole week of testing.  So, we really only have a month a half off.  Most people would sit home and relax and do their workout routine.

“Well, I try to work on race cars.  Every day I’m back in Texas I’m working on a Pro Mod car, or an A Fuel Alcohol Dragster and I’m getting my hands dirty.  I was working on an injected Nitro dragster this afternoon.  It’s something I love to do.  Yeah, I try to stay fit.  I eat right and I keep my mind sharp by keeping my head in racing.”

Massey is keenly aware of whom to be on the lookout for this season and who will be his toughest competition.

“If I had to predict my biggest competition, it’s the same names.  It’s Shawn Langdon and Alan Johnson, that‘s a tough team.  Langdon is great on the startling line and on the other hand is my teammates to contend with.  Tony Schumacher and Antron Brown and Langdon are the guys you have to watch out for this year.  The No.1 person on my mind is our self.  We can beat ourselves just as easy with simple mistakes in 2014 and turn the win light against us.

But we’re going to change that!”