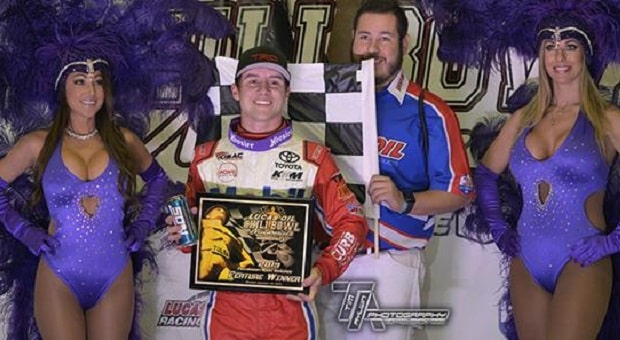 California born dirt driver Logan Seavey was the name on everyone’s lips on the first night of the 2019 Chili Bowl after leading every lap in this week’s first feature event.

Taking advantage of his Heat and Qualifier wins, this dirt sprint car young gun was able to put his Keith Kunz Motorsports No. 67 on the pole for Monday night’s 25-lap feature. After the wave of the green flag Seavey quickly put distance over the No. 1R of Brad Sweet. Although the No. 76M of Brady Bacon would put the pressure on second place driver Brad Sweet after the caution lights blinked following the first eight laps of this race, the restart would give Seavey the chance to roll away from the field again.

Despite no other drivers proving able to stop Seavey’s dominance, the runner-up spot continued to be highly sought after. Along with both Sweet and Bacon the No. 21B of Chase Briscoe also worked his way into this heated battle. Prior to the end of this race, the red flag waved again after several cars crashed in the first turn within the last 10 laps.

Making the move to the cushion on the restart, Seavey quickly put distance over the fight for second as Bacon continued his pursuit of the final lock-in spot for Saturday’s feature event. Trading top to bottom again, Sweet bested Bacon until Lap 22 when Brady finally gained the upper hand off the second turn.

On the final lap, with Bacon chasing his tail, Logan Seavey found his way to his first dominating victory, 0.887 seconds ahead of Bacon.

“To have the night we had, everything just fell into place and that is kind of what it takes for this week’s racing events,” said Seavey. “That first caution came right when I got to lapped traffic, and I couldn’t ask for anything better than that. After the second one I was starting to feel the bottom slow down and I could see Sweet closing in on me, and as soon as we went yellow or red I had about half the crowd telling me to move to the top. This gave me exactly what I needed to fight for the win.”