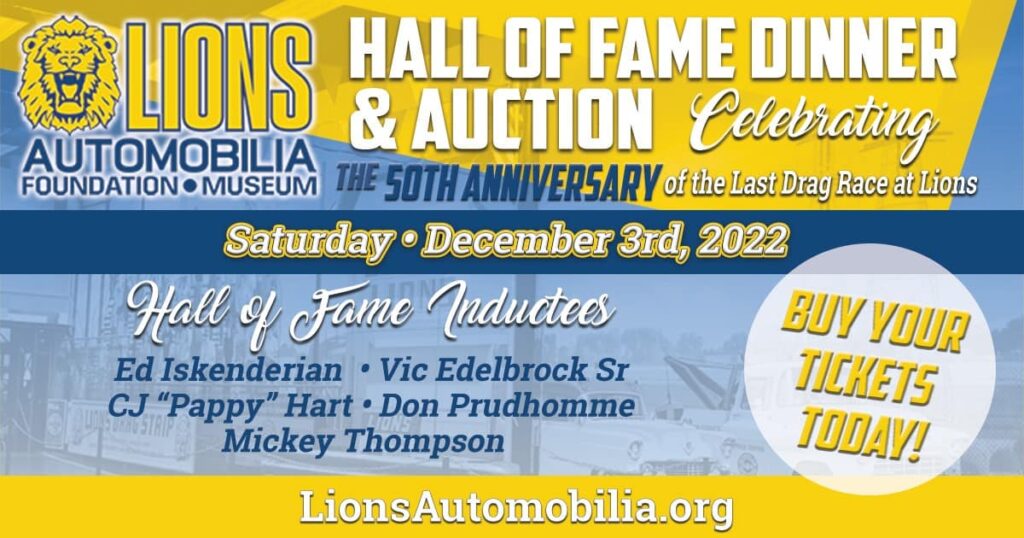 The Inaugural Lions Automobilia Foundation Awards Dinner and Silent Auction will honor some of the brightest legends of the sport. The dinner and auction will take place this weekend on December 3rd. The Ceremony will honor the “Golden Anniversary of the Last Drag Race.” if you were looking to get a seat, unfortunately, that wont be in the cards. The highly anticipated event has already sold-out. The ceremony will be dedicated to recognizing those who influenced Southern California Motorsports and inspired its car culture lifestyle. Drag racing legend Don Prudhomme will join Mickey Thompson, Ed Iskenderian, Vic Edelbrock Sr., and CJ Pappy Hart as a member of the first Hall of Fame class. Already a member of the Drag Racing Hall of Fame, International Motorsports Hall of Fame, the Motorsports Hall of Fame of America, the SEMA Hall of Fame and recognized as a Texas Motorplex Legend, Bristol Dragway’s Legends of Thunder Valley and the No. 3 racer on the NHRA’s list of “The 50 Top Drivers of All Time,” Prudhomme feels this induction is a tremendous honor.

“I have been inducted into just about every Hall of Fame there is but getting inducted to the Lions Drag Strip Hall of Fame is special,” said Prudhomme. “There is so much history at that track and the drivers who raced there made drag racing what it is today. I have too many people to thank but I will say I appreciate everyone that came to the races, bought a t-shirt and cheered us on when we were just getting started. For me Lion’s Drag Strip will always be one of my favorite tracks.”

The event will also be celebrating the 50th Anniversary of the Last Drag Race at Lions and recognizing its winners: Carl Olson (TF), Tom McEwen (FC), Bill Bagshaw (PS), Jimmy Scott (Competition), Ken Veney (Injected FC), Ed Sigmon (Modified), Ron Zeolle (Super Stock) and Dave Benisek (Stock). Proceeds from the event and silent auction will go to support the Lions Automobilia Foundation Youth Engagement and Career Path Programs. Geared to engage students and young adults by unveiling the history of motorsports and car culture in Southern California and assist them in discovering the craftsmanship and passion invested in vehicle restoration, maintenance, and design.

“I have a lot of memories from racing at Lions Drag Strip. One of my favorites is when Mickey Thompson threw me out for doing a wheel stand,” added Prudhomme. “I was still learning and I did a wheel stand. He told me if I did that again he was going to throw me out. I ran again and did another wheel stand and he threw me out. Now I am getting inducted into the Hall of Fame there, that’s wild. That place was very cool. It was THE drag strip to go to. I remember (Don) Garlits bringing his rear engine dragster out there and beating all of us. Lions Drag Strip helped make my career and I am honored to be going into their Hall of Fame.”

The city streets within the museum walls will take fans and guests back to the grassroots as they enter the Lions Drag Strip time capsule and look right at the starting line with cars in the staging lanes. Guests will be encouraged to explore the museum galleries, participate in the silent auction, and enjoy a cocktail mixer in the Long Beach Grand Prix Paddock Club followed by a delicious, seated dinner and presentation of the Legends of Lions Award Ceremony. The evening will wrap up with a live music performance in our Circle Drive-In.