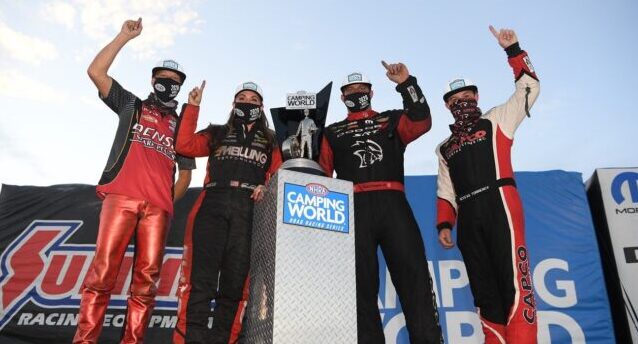 What is it that they say about Las Vegas? What happens in Vegas stays in Vegas…now What happens here, only happens here, may have once been true, but the newest champions of the National Hot Rod Association (NHRA) are sure to disagree – especially after earning what is sure to be one of the most memorable championships ever. In a season marred by a worldwide pandemic, cancelled races and even a new mid-season sponsor change, the continued King of Top Fuel, Steve Torrence continued to keep his cool as he would make an easy march toward his third consecutive championship at the Dodge NHRA Finals at The Strip at Las Vegas Motor Speedway this weekend before he ever made it to the starting line for the first round. While Torrence’s latest crown jewel came easy for the Texas native during this shortened season, the newest Funny Car champion, Matt Hagan, had a bigger battle on his hands that involved taking down his own Don Schumacher Racing teammates in the final two elimination rounds to clinch his third Funny Car Series championship. Although this sport is often dominated by men, the newest queen of the Camping World NHRA Pro Stock  Stock Series – Erica Enders drove to a dream come true weekend at The Strip at Las Vegas after driving to a perfect 4-0 in Sunday’s final rounds. Much like his fellow dominant drivers, newest Camping World NHRA Pro Stock Motorcycle World Champion Matt Smith also drove to his fourth championship after entering the season-ending Dodge NHRA Finals as the points leader over teammate Scotty Pollacheck and Harley-Davidson rivals Eddie Krawiec and Andrew Hines and officially clinched the title by reaching the semifinal round against Hines. 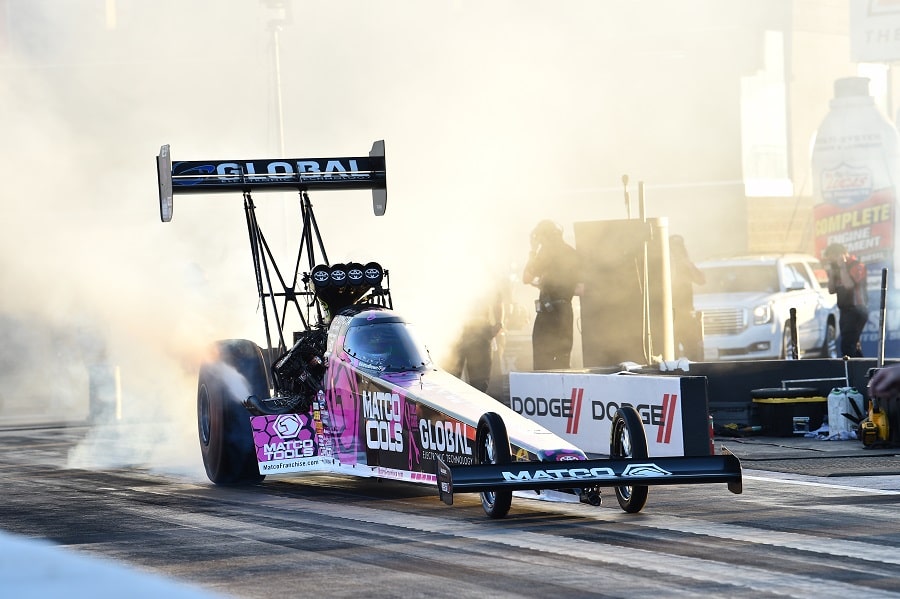 As Sunday’s final elimination rounds would begin, the continued reigning king of Top Fuel said that pursuing his third consecutive championship was truly humbling and life changing. Although he would make it look easy to clinch his latest championship ring, Torrence would still have to take down Doug Kalitta, the only driver with a chance still to unseat this dominant force. After Justin Ashley would take down the senior member of the Kalitta Motorsports in Sunday’s first round and Torrence Racing’s king would move on to defeat Kebin Kinsley a few pairs later Steve Torrence would officially be crowned the 2020 king of Top Fuel. 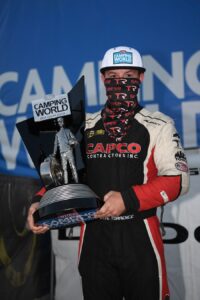 “First and foremost, I want to thank my Lord and Savior Jesus Christ, because I fall short a lot, and everybody sees it. I get it. It is not something that I am proud of,” said Torrence. “I am proud of my team -– Richard Hogan, Bobby Lagana, and all of those guys who give both heart and blood to do this. To go out there and earn three championships in three years is almost unbelievable, especially since we are just a bunch of hillbilly pipeliners from east Texas who just go out and enjoy doing what we love.”

Although Torrence was all the rage on Sunday, another famous member of the Top Fuel family would break his winless streak this weekend in Vegas. Antron Brown, the three-time world champ who had been winless since the Seattle event in the summer of 2018, collected the Top Fuel win at the Dodge NHRA Finals presented by Pennzoil, after upsetting freshly recrowned three-time world champ Steve Torrence in Sunday’s final elimination round. 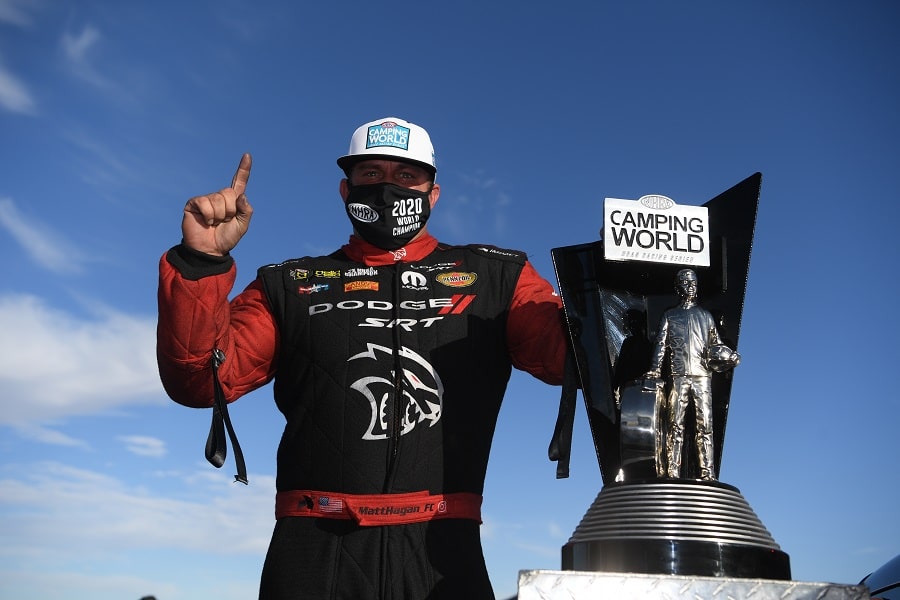 Much like Torrence Racing, who has been the dominating force in the Top Fuel Series, Don Schumacher Racing’s four Funny Car four have also monopolized all the wins throughout the 11-race season. As the elimination matches would wind down on Sunday, the only question that would remain is which of these four drivers would drive his way to the top. After Jack Beckman was upset in round one by Paul Lee and Tommy Johnson Jr. would follow suit after being taken down in Sunday’s semifinal round by fellow teammate Ron Capps, Matt Hagan would begin to prove that he and his team had what it took by taking the win in Sunday’s final elimination round to clinch his third NHRA Camping World Drag Racing Series championship.

“This win was definitely a dogfight,” said Hagan. “This championship was for my brother that I lost three years ago and for Dickie Venables and all of my guys I cannot say how proud I am of each and every one of them. They bust their damn asses each and every day and I just try to drive the wheels off of this thing to make championships like this happen.” 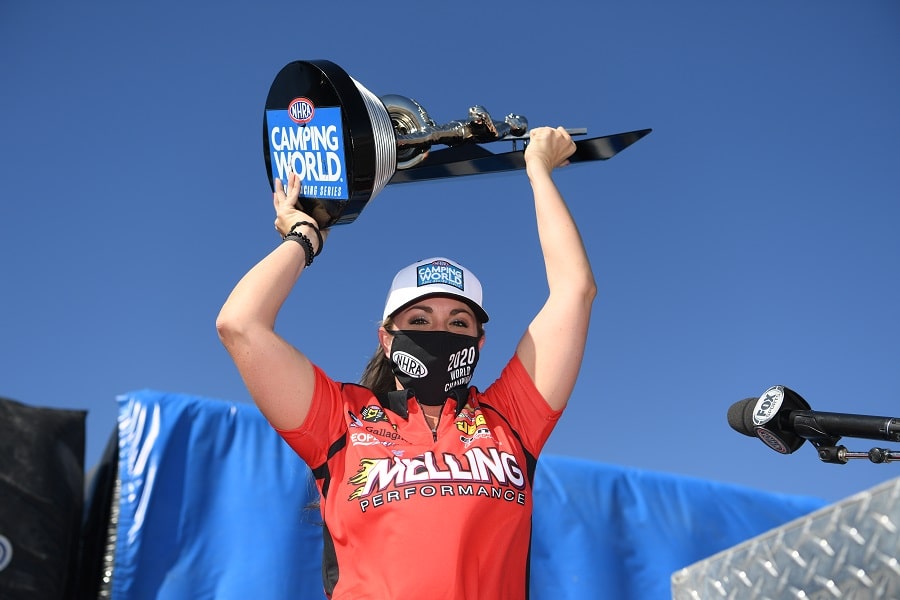 For those who follow this sport, you know that men often dominate each division, but that definitely was not the case for the 2020 Pro Stock championship. After capping off what was easily one of the best days of her long and successful career, Erica Enders won her fourth Camping World NHRA Pro Stock championship on Sunday after starting the weekend on a rocky note after qualifying 12th. Despite this, Sunday would be a perfect day for Enders and her Melling/Elite team would race to a 4-0 finish and even earn the victory in Sunday’s final round against rookie Kyle Koretsky, after he red-lighted in his Nitro Fish Camaro.

“What an unbelievable day,” said Enders, who now has won six times in Las Vegas including four at the fall race. “This place has been so good to me, but I could not do it without my team. This was not our best year by any stretch, but we persevered and dug deep and found a way to make it happen. I am a luck girl to live the life I do.” 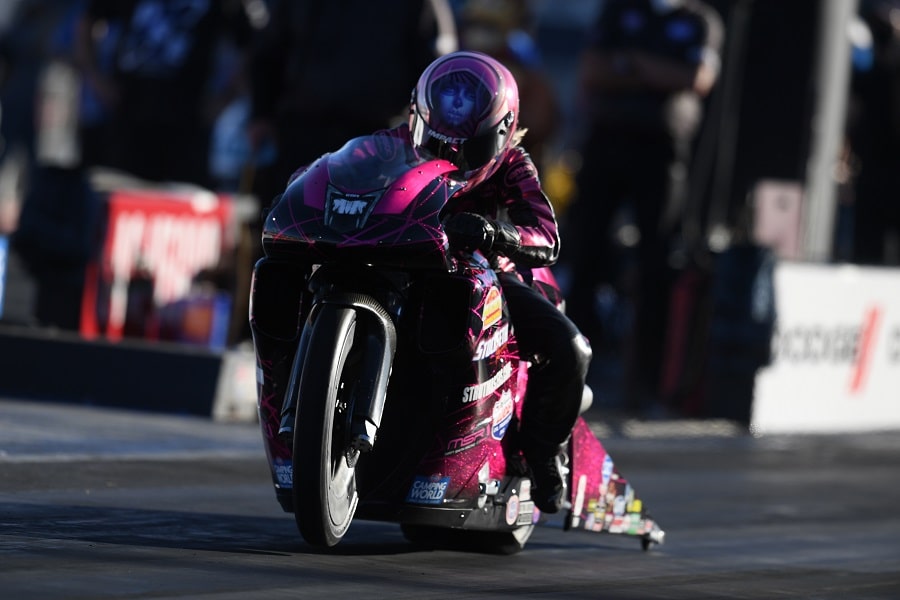 Sunday’s 2020 World Championship day would be capped off by a pair of two-wheeled speed demons that were more than just competitors – they are family. After being dominant throughout the shortened 2020 season Matt Smith and his Denso EBR were rewarded on Sunday in Las Vegas with his fourth Camping World NHRA Pro Stock Motorcycle world championship. Smith kicked off eliminations with a win over the third Harley rider, three-time champ, Angelle Sampey. Rivals Pollacehck and Krawiec also advanced. Pollacheck’s title hopes evaporated when his bike slowed against his wife Angie in the quarterfinals. In the next pair, Krawiec gave up a big lead off the starting line against Hector Arana Jr’s Lucas Oil EBR and could not make up the difference. With the championship secured, Smith defeated Hines to reach the semifinal round on the strength of a 6.875 run. 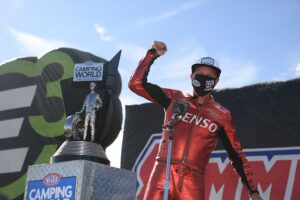 “This was a long hard battle to win,” said Smith. “I cannot thank my team or even my wife enough for making this championship happen.”

Hours after watching her husband, Matt, win his fourth Pro Stock Motorcycle world championship, his wife Angie Smith picked up a Wally of her own when she won the final round of the Dodge NHRA Finals presented by Pennzoil on Sunday. After outrunning Steve Johnson’s Suzuki in Sunday’s final round with a 6.917-second pass against Johnson’s 6.990-second attempt the Smith family would have another reason to celebrate yet another Las Vegas victory.

“It is important to never give up on your dreams,” said Smith. “You can do anything if you put your mind to it. I need to thank Denso and Mark Stockseth and everyone who helps us, including my talented husband Matt. I also need to thank my team for building me up and never giving up on me. Sometimes, I know that I am a pain in the butt, but they always got my back no matter what.”

While this has been a strange race season for the Camping World NHRA Series, we at RacingJunk congratulate all of this weekend’s winners and world champions and we are looking forward to the full return of the 2021 season.