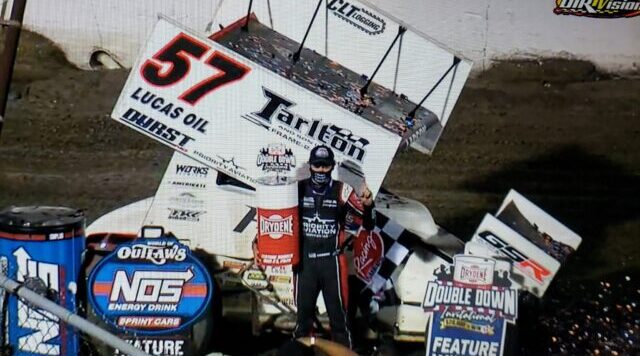 While many of us celebrated our own fireworks show, to commemorate those who have given their lives to keep this country free, a well-known driver raced his way to his own firework worthy redemption story at Federated Auto Parts Raceway at I-55 on Memorial Day Weekend.

Despite losing his Chip Ganassi Racing NASCAR Cup Series ride recently, Larson found a way to turn the page and honor those who gave him a second chance to return to his racing roots in the World of Outlaws NOS Energy Drink Sprint Car Series.

Kicking off the weekend in the Drydene Double Down Invitational weekend with the breaking of a track record, by becoming the first driver in track history to turn a lap under 10 seconds in qualifying, Larson continued on his new unpaved road of success with a win over Friday night’s winner Brad Sweet and Brent Marks in Saturday night’s Drydene Double Down Invitational finale.

The start of this 40-lap Feature gave the No. 17 of Sheldon Haudenschild the opportunity to lead the 26-car field to the wave of the green flag. This lead would be short-lived though as Friday night’s winner, Brad Sweet,  bested Haudenschild on the first turn and stole the lead. Although most fans in the stands, who most were attending their first live race since the start of the COVID-19 pandemic, were probably betting on the former night’s race winner, it wouldn’t be long before last year’s Ironman 55 winner Sheldon Haudenschild to get into a rhythm around the top of the track to reclaim his lead within two laps.

From then on Haudenschild seemed poised to repeat his Ironman performance as he began to slice through traffic with the precision of a fighter jet. In spite of his valiant efforts, there was another driver fighting his way towards his first win of the 2020 season.

Already moving up to second by Lap 10 Larson, who started this race inside the top five, was giving it his all to race his way to the top. Just as he seemed to be finding his stride, Larson would eventually touch the wall with his right rear and broke the Jacobs Ladder on the rear end of the car, which made handling a real challenge for the remainder of this race. Although he would have to adapt to hang on, Larson said that it only took a few laps “before he started running the crap out of it” and that is exactly what he did. This effort paid off on Lap 23 when Haudenschild went over the cushion going into Turn 1 and flipped.

After being handed the opportunity to take the lead for the final 17 laps, Larson would still have to hold off challenges from brother-in-law Brad Sweet as well as second place finisher Brent Marks. As the final caution flag of the night would fly, these three drivers would wind up in a six-lap shootout, with Larson leading the way. Thanks to Sweet becoming preoccupied trying to hold off current points lead Logan Schuchart, Larson was only forced to hold off current points leader Logan Schuchart. As the laps would wind down, Larson would continue to power his way around the 1/3-mile dirt track and eventually speeding down the front stretch toward the checkered flag. As the once defamed driver rolled into Victory Lane fans continued to celebrate in a huge way and the latest victor said that he could feel the support in a whole new way.

“To win in front of a huge field, and crowd too, it felt great,” said Larson. “I appreciate so much everyone who has stuck behind us after my mistake there. It means a lot and I am having a blast trying to have as much fun as I can anyways. We have struggled the last two weeks so to turn it around now, it gives me and this race team the confidence we need to succeed.”

The World of Outlaws NOS Energy Drink Sprint Car Series will return to racing at Lake Ozark Speedway on May 29-30. Stay tuned to RacingJunk.com as racing returns in the dirt.