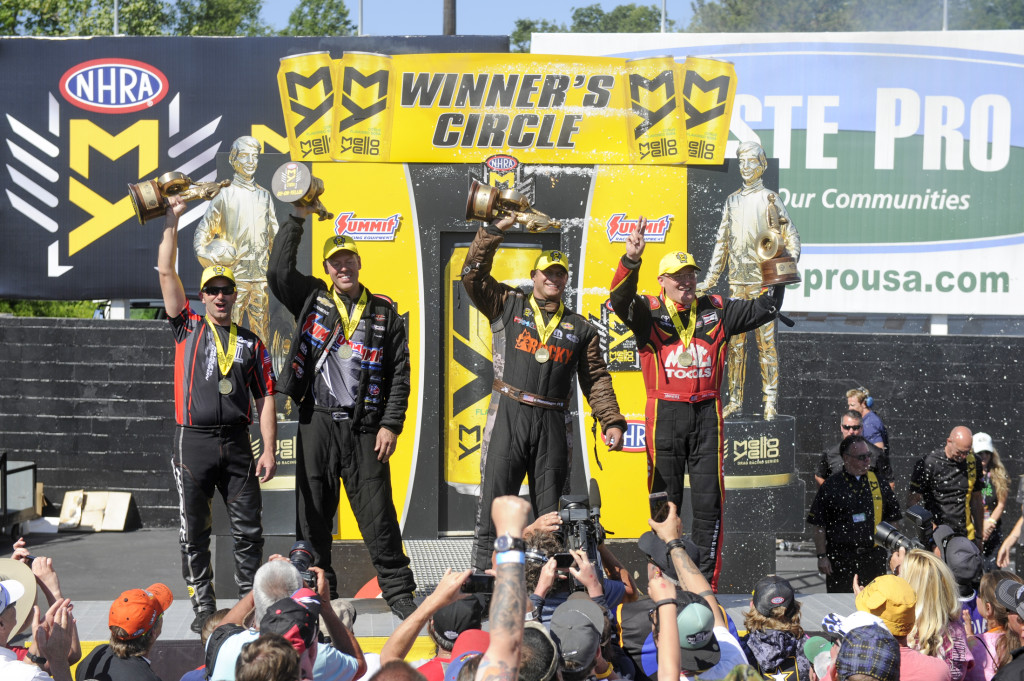 Atlanta Dragway is quickly becoming one of NHRA’s most competitive tracks and as “Georgia’s House of Speed”, it certainly was primed for some of the best racing of the season. Doug Kalitta will be listed as the winner in Top Fuel, but when you check the margin of victory, it doesn’t exist. Against, Kalitta Racing teammate, J.R. Todd, the race was a virtual tie with the winning arrow pointing towards Kalitta in a number beyond the four (.0000) digits NHRA uses to determine the margin of victory.

Matt Hagan turned his Funny Car season around, striking down his Don Schumacher Racing teammate, Jack Beckman, for his first win of 2016, while in Pro Stock; Jason Line upped the score against his teammate, Greg Anderson, winning on a hole shot in the seventh consecutive final round for Ken Black Racing. Eddie Krawiec monopolized Pro Stock Motorcycle class beating Jerry Savoie in the competitive finals. 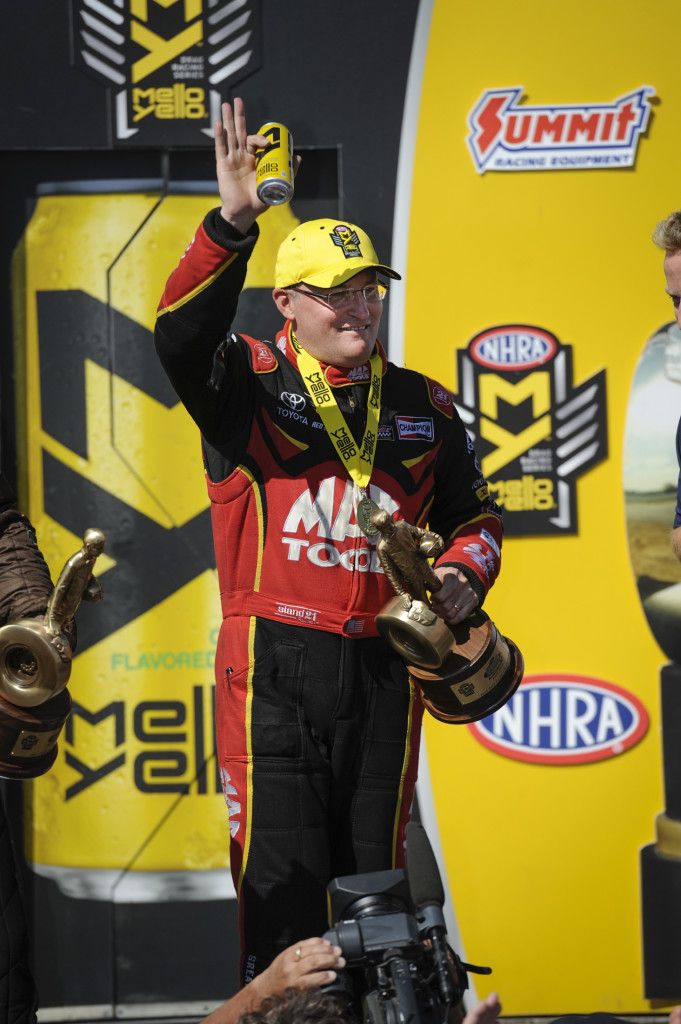 The Top Fuel division battled down to the two Kalitta Racing teammates of Doug Kalitta and J.R. Todd in a nailing biting affair, the win light glaring in Kalitta’s lane as the only way to tell the teams who had won. As it turned out, it was the closest Top Fuel finish in NHRA history.

It was Kalitta’s second straight victory taking the TopFuel honors in Houston and is now the leader in the Top Fuel pointsstandings.

“What an incredible race,” said an excited Kalitta. “It just shows how much effort and time goes into these race cars at Kalitta Motorsports. I could not be more proud to a part of this team and part of what the Mac Tools guys are doing. To win two in a row is stellar and I could not be more excited.

“I really didn’t think I had won. The last couple of rounds I didn’t see the win light on the wall. J.R. went blowing by me at the end there and I got around the corner and I was very relieved, to say the least. Jim [Oberhofer, crew chief] and my guys have been busting their butts all day long and we were hungry to do well in front of the sellout crowd here in Atlanta.”

Kalitta’s march to his 40th Top Fuel title had to go through Terry Haddock, Tony Schumacher by a scant .002-of second margin, and defending champion, Antron Brown before aligning with Todd in the finals.

“NHRA has been staging drag races for a long time, so it is hard to grasp the idea this was the closest race in Top Fuel history,” said the No. 1 Atlanta qualifier.

It was the first all Kalitta Motorsports Top Fuel finale in 10-years, the last being when Kalitta joined his then teammate, Hillary Will in Memphis in 2006. 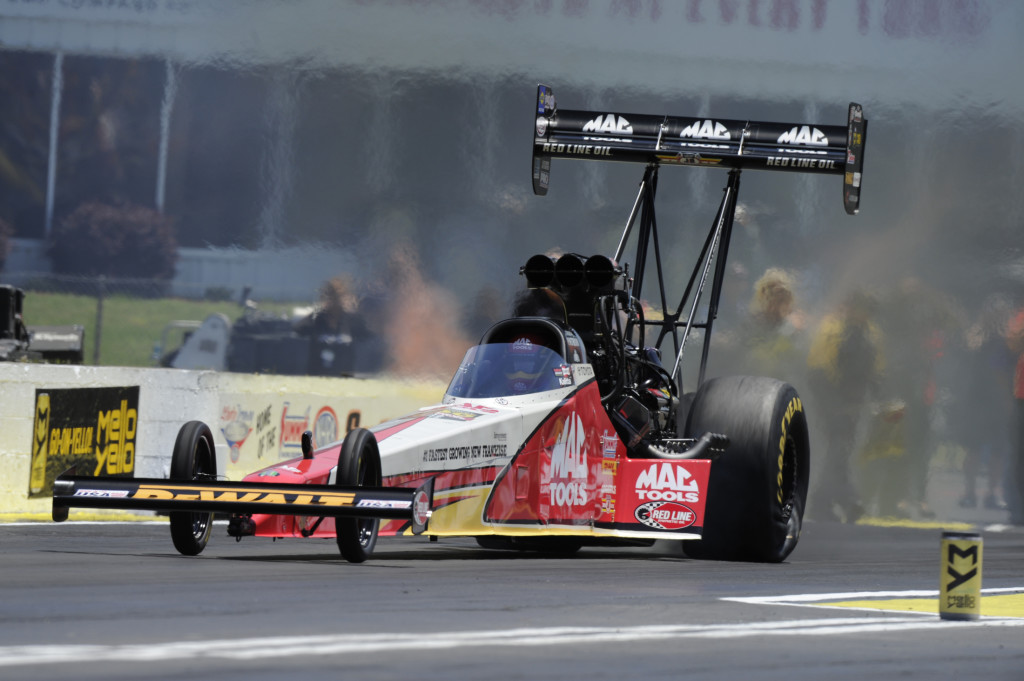 Kalitta also scored back-to-back wins for the first time since 2006 and took over the points lead by 64 over Antron Brown with Brittany Force now in third, 68 points out. 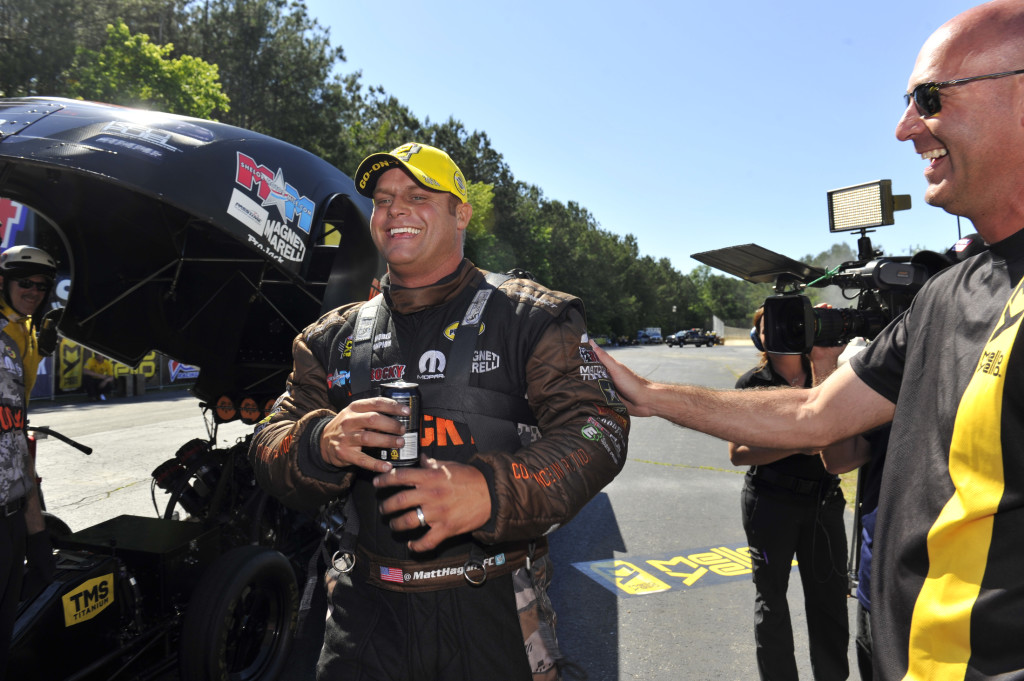 The 19-race winless streak for Funny Car racer, Matt Hagan came to an abrupt ending on Sunday at Atlanta Dragway, defeating a very determined teammate, Jack Beckman, in an all DSR-Fuel Coupe final.

The two-time Funny Car champ led by crew chief, Dickie Venables had beat Chad Head in the first round with low Elapsed Time of the class with a time of 3.906 seconds and then defending Funny Car champion, Del Worsham in the quarterfinals. He continued to reign down three-second passes, beating current points leader,Courtney Force in the semi-finals setting up his match up with Beckman.

Although his 19th win of his young NHRA career came after a slow start to the season, exiting in the first round three of the first four races, he now has entered the Top 10 in ninth with 390 points.

“Honestly, these cars are so humbling and we’ve been trying to dig out of a hole that we’ve dug ourselves in from the first of the year when we were trying a new chassis and some parts,” Hagan, the No. 2 qualifier, said.

“We went back to what we know. Setting low ET of every round today, I would say that Dickie [Venables] has a pretty good handle on it. We all knew it was just a matter of time before we figured it all out. It really puts it in perspective how hard these things are to win, how hard it is to get round wins sometimes. We’ve been working hard and it’s not from a lack of effort, and now we’re starting to turn the corner. We’ve just felt good about everything recently.” 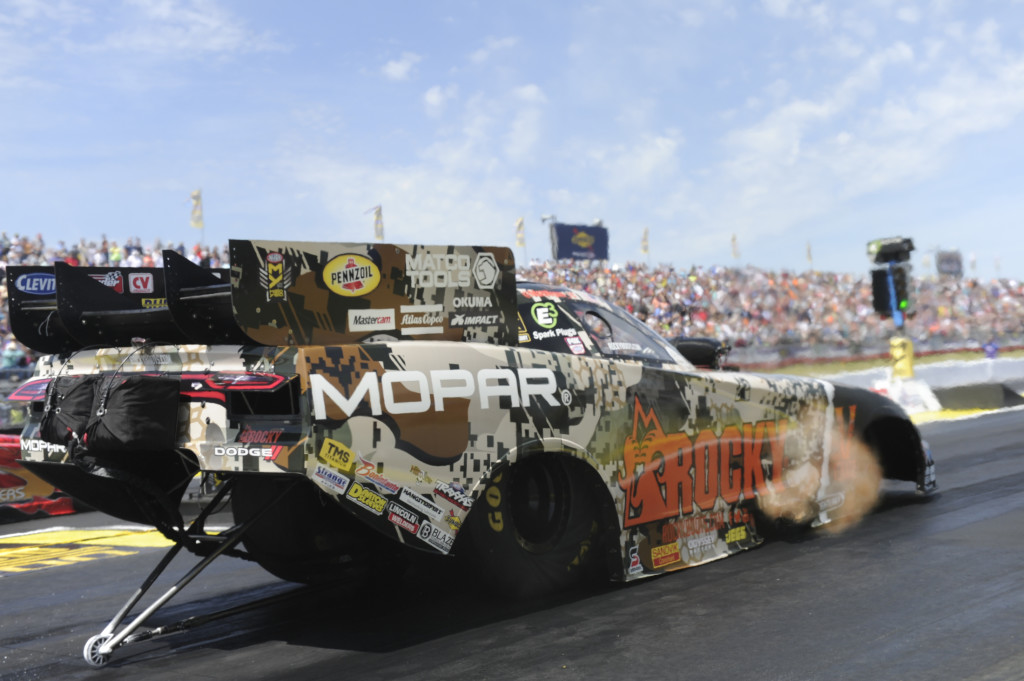 Beckman, the No. 1 qualifier, made his first final round appearance of 2016 at Atlanta, moving up to second in the points standings behind Force by 40 points.  Tim Wilkerson, who entered Atlanta tied with Force for first in the Funny Car points standings, is now third, while Capps is fourth and Robert Hight is fifth. 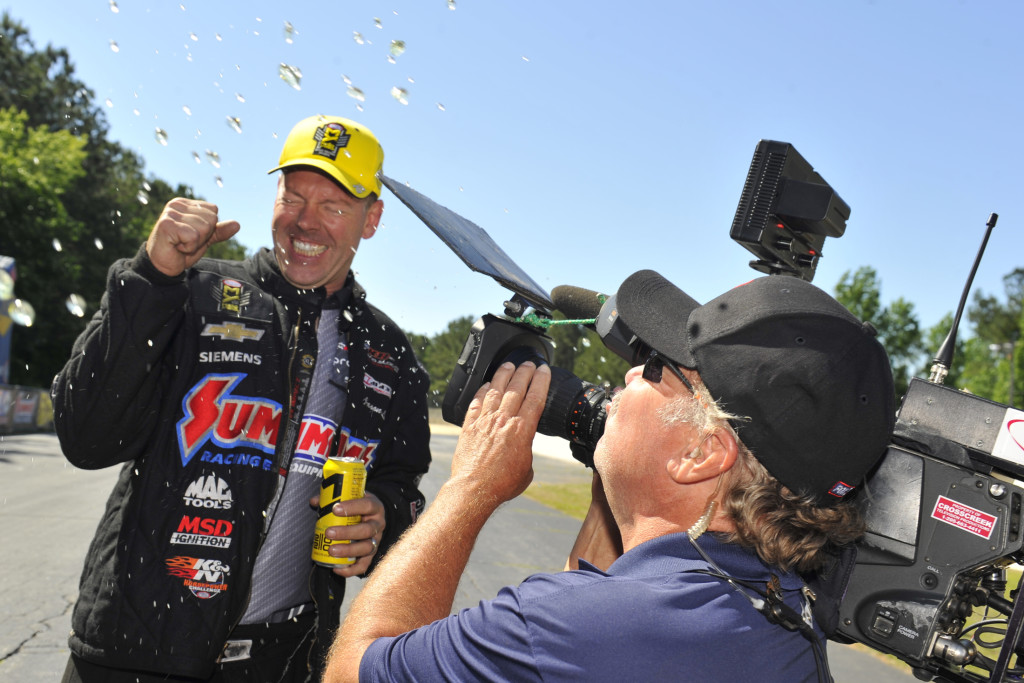 Jason Line upped the ante against Pro Stock KB Racing teammate, Greg Anderson by finally turning him back and on an impressive hole shot to collect his fourth win of the 2016 season at Atlanta Dragway.

The runaway train of consistency that has led this Mooresville, NC-based team to every final round with Line running his total to 28 consecutive racing rounds adding to a points lead that gets larger every race, which now stand at 96 over Anderson.  He won his rounds of eliminations taking out John Gaydosh, Jeg Coughlin, and Allen Johnson, setting up his finals with Anderson.

Besides being close to his home with lots of friends and family in attendance, Summit Racing was the sponsor of the race but Line as he’s been all year, remained unflappable and taking everything that came his way all in stride.

“Any day you win in front of your sponsor it’s a huge day,” said Line, now with 41 Pro Stock wins. “Somehow we always seem to dig a little deeper at these races.  This is a very tricky racetrack.  I haven’t been at an Atlanta track like this ever and we struggled with it. I’m a little bit in awe that I’ve been able to race in all the rounds this year. That’s pretty crazy.”

Line, beaten in Houston by Anderson in their last final, was looking a little sweet revenge readying with a .015 reaction time light to Anderson’s .058.  Line reached the finish first, clicking the clocks with a time of 6.611 seconds,209.75 mph to Anderson’s quicker pass of 6.593 seconds, 210.50 mph. It was Line’s third overall win at Atlanta Dragway.

Anderson was the No.1 qualifier for the fourth time of the season showing his dominance in the class just had to take a deep breath accepting the loss, but still grinned knowing it’s still all about KB Racing. 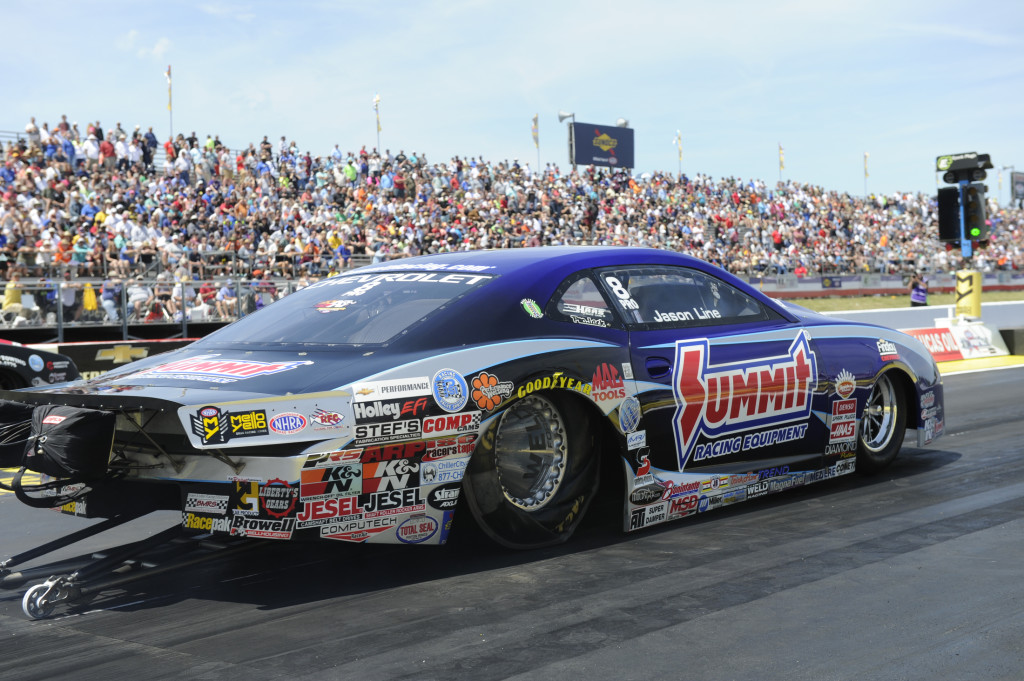 “I had the best car on the grounds but I didn’t get it done as a driver,” said Anderson. “I’m very proud of the race car and the job the team did on the car.  It was a great day for KB Racing.  Wonderful day and wonderful weekend in front of Summit Racing, two Chevy Camaros duking it out in the final round and he got the best of me this time.  Hopefully we’ll lock horns again in a few days at Topeka.” 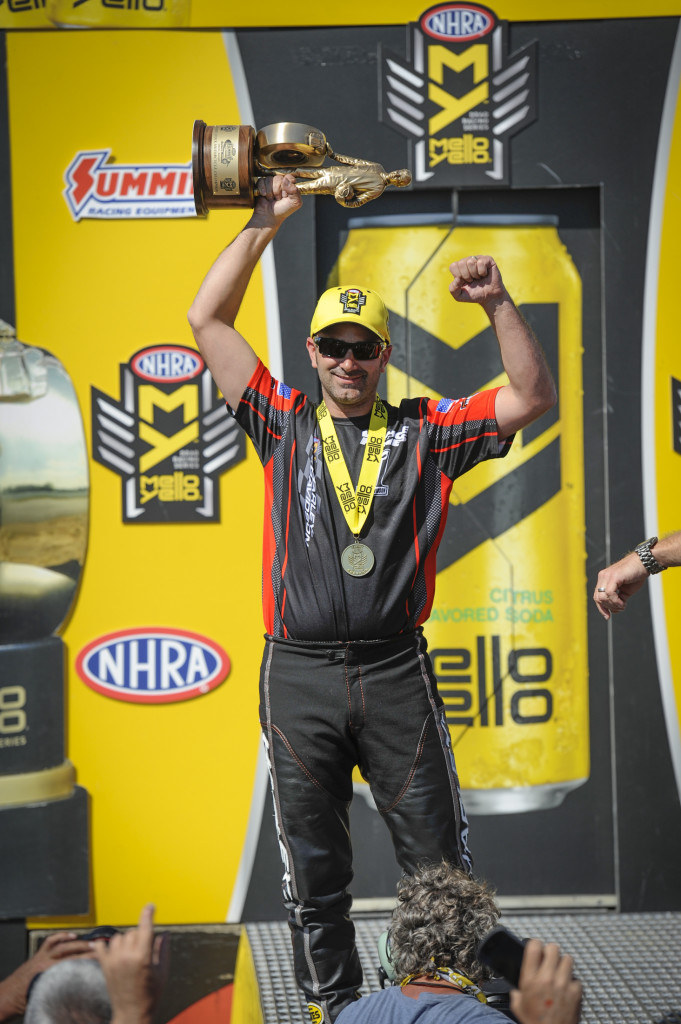 “Atlanta has treated me well,” said Krawiec, a three-time world champ. “I got my first win here and it’s one of those things where if you just feel comfortable and you’re in a groove, you’ll have confidence. For me, I think all of that has fallen into place. The track was a little tricky for us but we were able to figure out our chassis set up and as we made more laps throughout the weekend, it got better and better. It was definitely a good,exciting, fun weekend for me.” 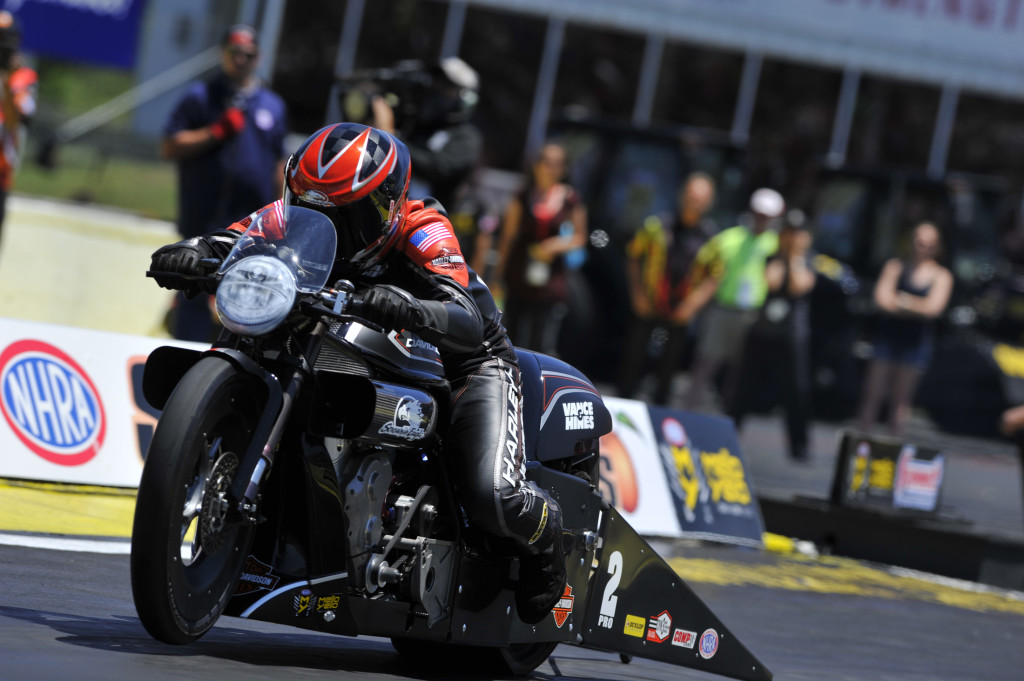