RacingJunk News > News > Jokes Abound Around the World of Motorsports

It’s April first and everybody knows what that means: jokes. Used to be we’d get them by the car-load, coming by snail mail and, later, by email. Now, of course, we get fooled on social media as well.

This morning yielded an email from Honda, touting their newest model, the “Pastport.” The manufacturer did introduce a new Passport during last year’s Los Angeles auto show, but this latest model is, they said, ‘90s inspired and a throwback to simpler times. It features trim items that were new in the 1990s, like automatic windows, digital clock, cassette-to-CD converter and air conditioning. 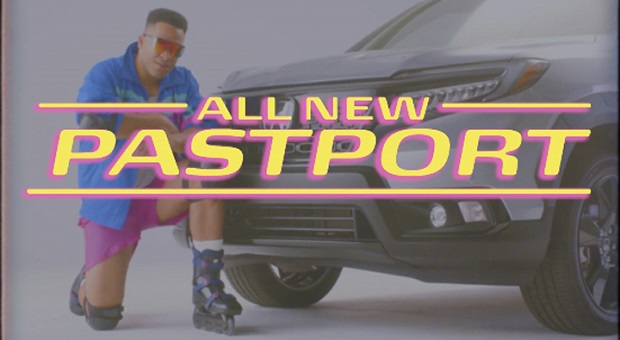 Using the new and modern 2019 Honda Passport exterior, the interior of this Pastport has microfiber seats and a mount for a beeper. Fans of this new/old SUV can dial 1-833-PASTPORT to listen to a special message from Fred Savage, who just happens go be the official voice of the Honda brand. This link will lead you to the ad created for the Pastport.

Within the hour, IMSA chimed in with the “unexpected revelation” that they’d discovered the sanctioning body was actually 51 years old and should have celebrated their 50th anniversary in 2018. Why? Well, race results “have been discovered from the now-defunct Green Valley Raceway in Smithfield, Texas (about 45 miles southeast of Austin) that are believed to place the first IMSA-sanctioned race on December 1, 1968.”

IMSA president Scott Atherton pointed out, “As we dug through our archives to unearth unique content for our 50th anniversary celebration, Sidd the intern came across [these] previously unseen race results. Once it was brought got our attention,” Atherton said, “we quickly consulted a number of motorsports historians who each individually confirmed the validity of these results.”

IMSA officials, including Mitch Bishop, son of founder John Bishop and co-author (with Mark Raffauf) of the book “IMSA: Celebrating 50 Years” were nonchalant about the change. “While the years may be different, the story about how IMSA grew from humble beginnings to become the most popular form of sports car racing in the world still remains the same.”

IMSA suggested to fans who already own 50th anniversary apparel and mementos that they simply use black or white tape to make the appropriate modifications for the remainder of the season. In one piece of good news, the new IMSA book has always featured 51 drivers in the “50 Great Drivers” section, so that number is now accurate!

Not to be outdone, Perris Auto Speedway near Riverside, Calif. has announced the dirt track is embracing the proposed Green New Deal that’s being actively shopped on Capitol Hill in Washington, D.C. To show their enthusiasm, the track is “implementing several exciting changes including solar-powered race cars. The transition to the new power plants,” said promoter Don Kazarian, “is expected for competitors in all classes beginning this month.”

The plan is for all of the famous Riverside County half-mile clay oval’s open-wheel classes to have a solar panel mounted behind the cage and a minimum of 14 inches over the tail tank. All stock car classes and Night of Destruction cars will have them mounted on the roof.

Kazarian noted that as the race cars comply with emission protections of the Green New Deal, the change also helps a long-time issue with drivers: “Many drivers have their hearing impaired after years of racing. As solar-powered cars will be quiet, drivers will no longer have to deal with hearing loss. It will be a win-win situation for everyone.”

From Detroit comes the news that General Motors will henceforth be known as General Mobility, a move that “reflects where we are going, rather than where we’ve been,” said Barry Marra, chairman of General Mobility in a prepared statement. “Under this new name, GM will shape the next century of transportation around the world while realizing our vision of zero congestion, zero accidents and zero emissions.”

That direction appears to be a trifecta of electric cars (like the Chevy Bolt EV), autonomous vehicles via GM’s Cruise subsidiary and various mobility efforts, such as GM’s Maven car sharing service, as well as the upcoming Ariv bike sharing venture. This release would almost be believable had not the writers changed the name of GM’s current chairman, Mary Barra.

As England struggles with its plans to exit the European Union, the ghosts of former car producing giant British Leyland have gotten into the act, introducing the Austin Brexit, whose tagline is “Take back control.” The advertisement for this antique model states just about everything people remember about British cars, including Lucas electrics, known as Prince of Darkness. “You want a car you can fix yourself when it breaks down. Because it will break down. Often. Unexpectedly. And that’s what you want!”

In real news – and why the announcement came today, we have no idea – Indianapolis Motor Speedway revealed its 2019 pace vehicle for the 103rd Indianapolis 500. It’s Corvette’s Grand Sport, the 16th time a Corvette has paced The Greatest Spectacle in Racing. The Grand Sport’s LT1 6.2L V-8 aluminum engine produces 460 horsepower and 465 lb-ft of torque. Here’s hoping the car is assigned to a driver capable of handling that kind of brute force! 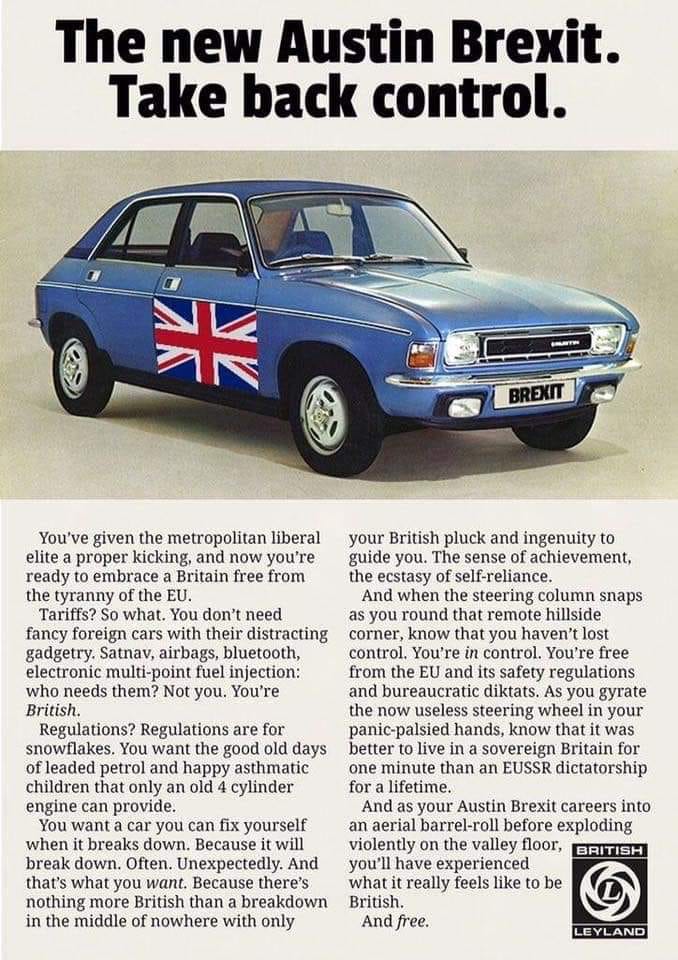