After a slow start to the 2019 NHRA season, one of the most well-known teams in the Mello Yello NHRA drag racing series found themselves back on top this weekend after Brittany Force and teammate Robert Hight shared the winner’s circle for the third time in their careers at the Mopar Express Lane NHRA SpringNationals in Houston.

In her fifth race with new crew chief David Grubnic, Brittany Force began her dominating weekend with a track breaking No. 1 qualifying run of 3.661-seconds at 332.18 MPH at Houston Raceway Park. The impressive John Force Racing Top Fuel driver followed this up with an equally swift performance on Sunday after taking down Cameron Ferre, Doug Kalitta and Clay Millican in each round, leading to her final round against past Top Fuel world champion Antron Brown, who had even powered past reigning Mello Yello champion Steve Torrence to race to his 92nd career final.

Despite Brown’s best efforts, Force won her ninth career race and back to back race win in Houston with a 3.749-second pass against Brown’s to 3.995-second attempt.

“All of John Force Racing was on a mission this weekend,” said Force. “Along with Dad and I being number one in qualifying, which was the first time a father and daughter were able to do that at an NHRA event, we were able to come out here and dominate in one of the toughest series, and I can’t thank my hard working team enough for this.”

Despite Force’s record-setting comeback win, the 2017 Top Fuel Champion continues to trail current points leader Doug Kalitta as the series heads to the home of motorsports in Charlotte, NC.

Brittany Force wouldn’t be the only John Force Racing driver in the winner’s circle on Sunday. Two-time Funny Car champion Robert Hight earned his third win of the 2019 season after defeating Jonnie Lindberg, defending Funny Car world champion J.R. Todd and even team owner and boss John Force for the fourth time in Sunday’s semifinal round.

Following these impressive battles, Hight moved on to Sunday’s final round against Matt Hagan, who raced to his 55th final round after taking down Tommy Johnson Jr., Blake Alexander and Ron Capps. Although Hagan was neck and neck against Hight in this round, Robert Hight claimed the 48th NHRA Wally of his career and third in Houston with his impressive 3.941-second pass against Hagan’s 3.966-second run.

“Our team came out swinging this weekend and this definitely showed in each of Sunday’s final rounds,” said Hight. “We couldn’t have had a bigger swing in conditions than we had this weekend, with the water grains being through the roof on both Friday and Saturday. Fortunately, that all changed on Sunday when the dry air came in and gave us just the track conditions that we needed to overpower each of these hard-working teams to join our John Force Racing teammate in the winner’s circle.”

Thanks to yet another win, this impressive John Force driver holds a commanding points lead over the rest of the Funny Car field as the series gears up for the upcoming NHRA Four-Wide Nationals at zMAX Dragway. 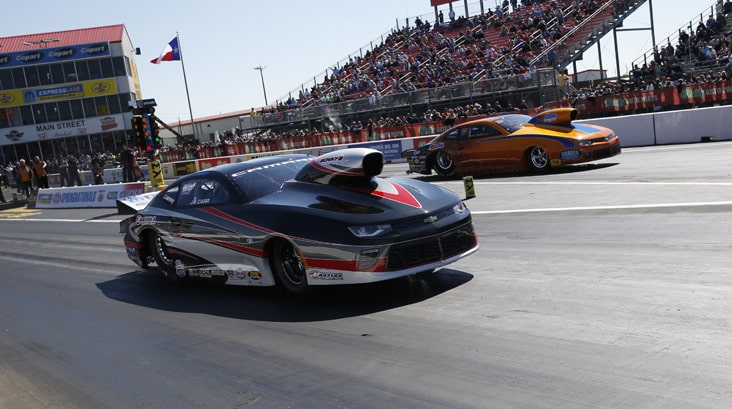 Along with witnessing a momentous moment in drag racing team history this weekend, those who attended this weekend’s Mopar Express Lane NHRA SpringNationals in Houston had the opportunity to witness the first of only four unique season races. The special exhibition race for Mountain Motor Pro Stock cars, which feature throwback hood scoops, dynamic paint schemes and wheel-stands for the first 100 feet from launch, featured a final round like no other on Sunday after John DeFlorian, the winner of the first NHRA MMPS exhibition last year in Indy, turned on the win light against J.R. Carr, whose team fouled and wasted a 6.243-second run.