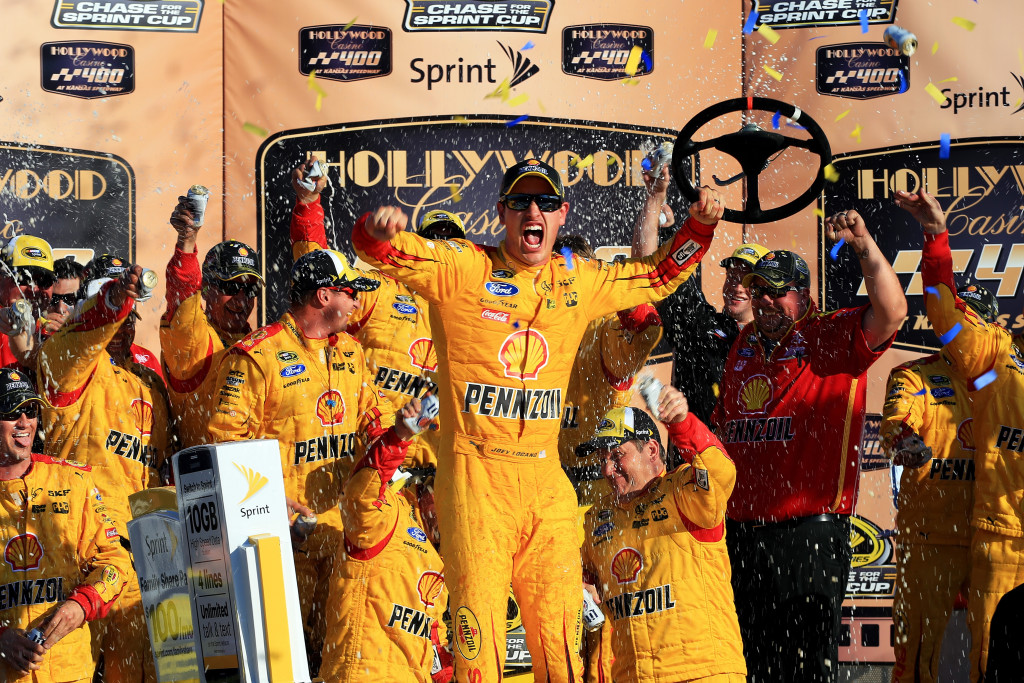 Joey Logano scored his second race win of the NASCAR Sprint Cup Contender Round in a green-white-checkered finish at the Hollywood Casino 400 that was triggered by Logano spinning out Matt Kenseth bringing out the seventh yellow flag with five laps to go.

It was Logano’s second win in Kansas, repeating as last year’s champion, his fifth of 2015 and 13th of his career.

While he was enjoying the laurels and accolades of victory lane, Logano had to survive not one but two blocks from Kenseth as he was making his charge with five to go.  On the second try going into turn one, the No. 22 clipped Kenseth’s left rear, sending him spinning and taking away his hope of winning.

“It was good, hard racing,” said the Daytona 500 champion, Logano.  “We were racing each other really hard, and I got in the fence twice on the straightaway.  He raced me hard, and I raced him hard back.  That’s the way I race.  If I am raced like that, I’ll race the same way.

“That’s how I’ve always been, and it will always be that way.  I really couldn’t be more proud of this team.  To be sitting in such a great position going into Talladega makes us feel really, really good.  I didn’t think it was a good move when I hit the wall.  I’m sure we’ll talk about it.  I felt like, ‘Hey, I’ve got to race hard.  I got in the fence twice,’ so I wasn’t going to put up with it.” 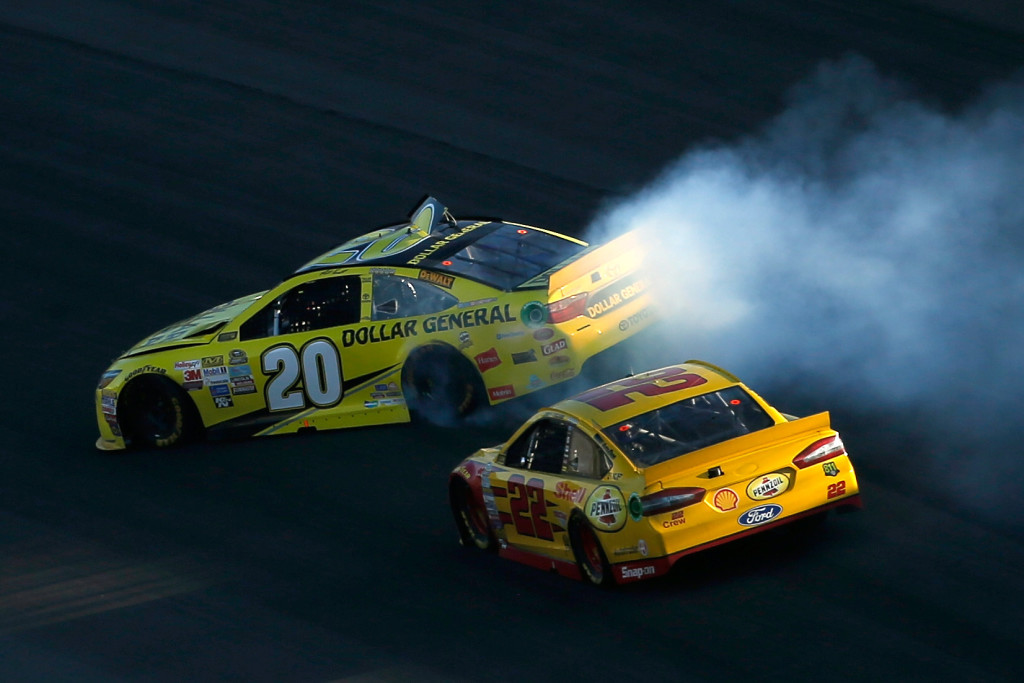 After last weekend’s Charlotte race disaster finishing 42nd, Kenseth was in a prime position to win, leading the most laps at 253 circuits after passing Jimmie Johnson on a restart on lap 248 of the scheduled 267.  Logano chased down Kenseth, needing the win and he attempted to pull away as his only hope in advancing to the Eliminator 8 Round, when he reached the frontstretch.  When the duo came upon three lapped cars, Kenseth dove to the apron to draft traffic while Logano went high with more momentum, surging forward.

Kenseth rolled back up the track, blocking Logano’s first charge, but as the two went into turn one, Kenseth went low to hold him off again only to find Logano’s right front fender sending his No. 20 Toyota spinning, leaving the 2003 champion 12th in the standings, 35 points away from the cutline after finishing 14th on Sunday. 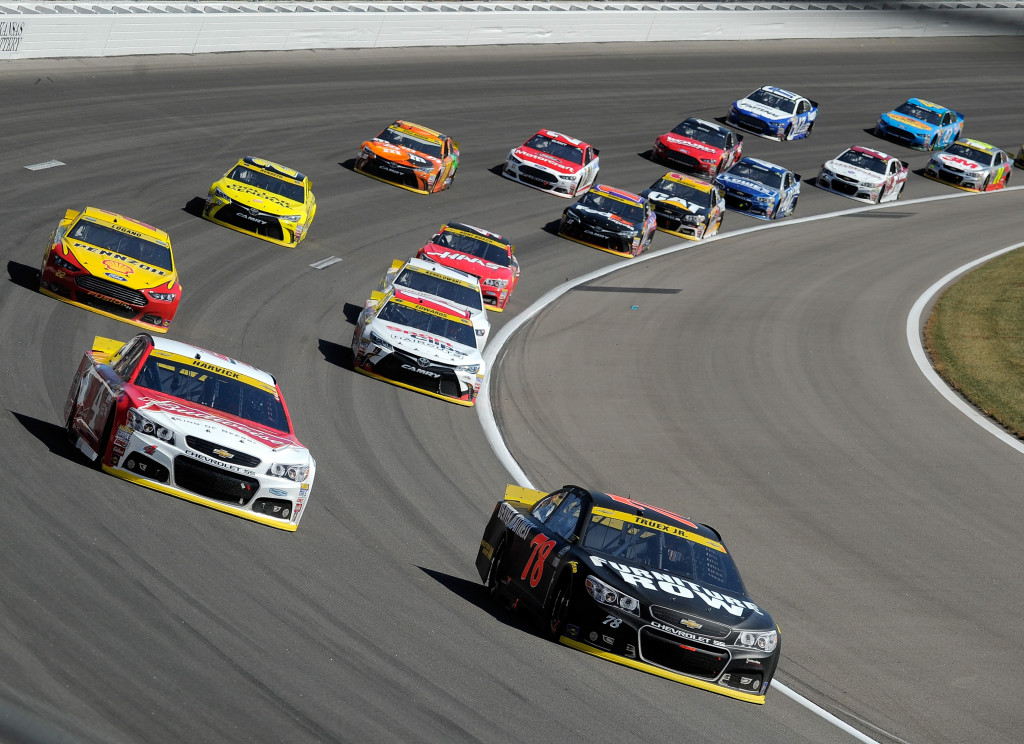 “It was really cut and dry,” Kenseth said.  “He [Logano] picked my rear tires off the ground and wrecked me, so there’s no debate about that one.  He was a little bit tighter on that short run than I was, and I couldn’t get away from him.

“All day we had him pretty good.  I still thought I was going to be able to stay in front of him and saw those lapped cars coming and tried getting a couple runs off the top there and I was plenty clear, got up in front of him and he just decided to take us out.”

In his post race interview, Kenseth stated he ‘has no plans to discuss the incident’ with Logano and said, “”I’m really disappointed.  I’ve probably been one of his biggest supporters.  It was an awkward thing, obviously, taking his ride, and I was excited for him when he started winning at Penske when he got that ride and even found him today and congratulated him about racing against each other for a championship.

“I was very disappointed that he would do that… Yeah, I was running the lane he wanted to run in, but my goodness isn’t this racing?  Strategically, it wasn’t the smartest move on his part.  He’ll probably sleep good tonight — I hope he enjoys that one.  It’s not what I would have done, but he had a decision to make and that’s the one he made.” 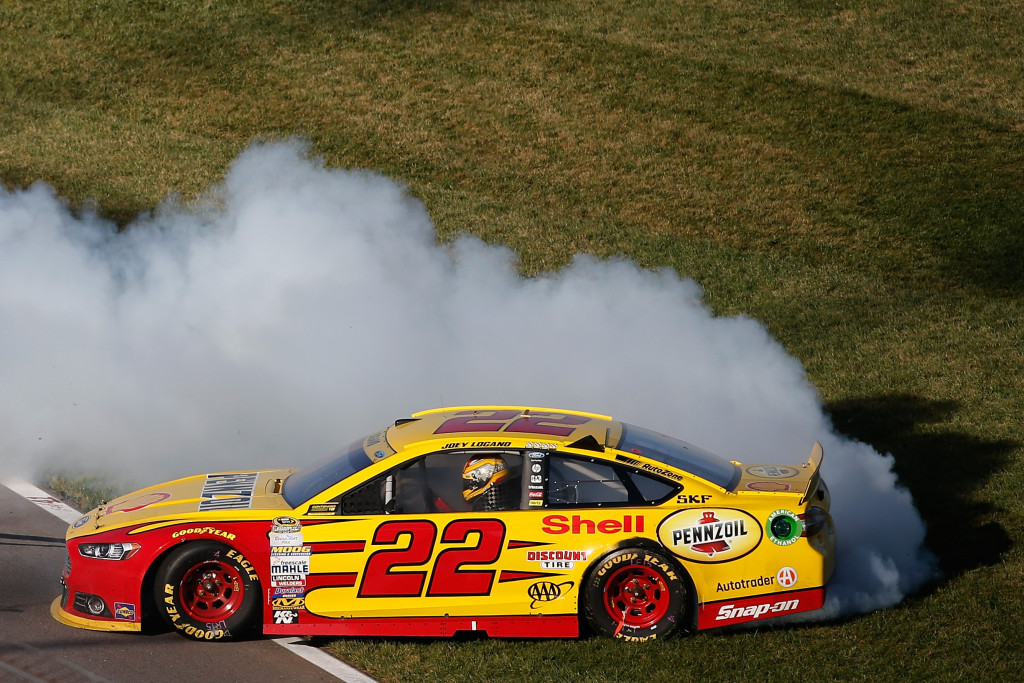 The NASCAR Sprint Cup Chase is quickly becoming contentious and with only one race left to get a free pass to advance to the Eliminator 8, the following driver standings could be completely reversed in just a week.

Logano is secure into the next round of the Chase, but the other 11 face Talladega SuperSpeedway next weekend.  As it stands now, the four drivers below the drop are Kyle Busch – 6; Ryan Newman – 8; Dale Earnhardt, Jr. – 31; and Kenseth – 35.

The average speed for the Hollywood Casino 400 was 135.732 mph.  The race saw seven caution flags for 39 laps.  There were 21 lead changes among nine different drivers. 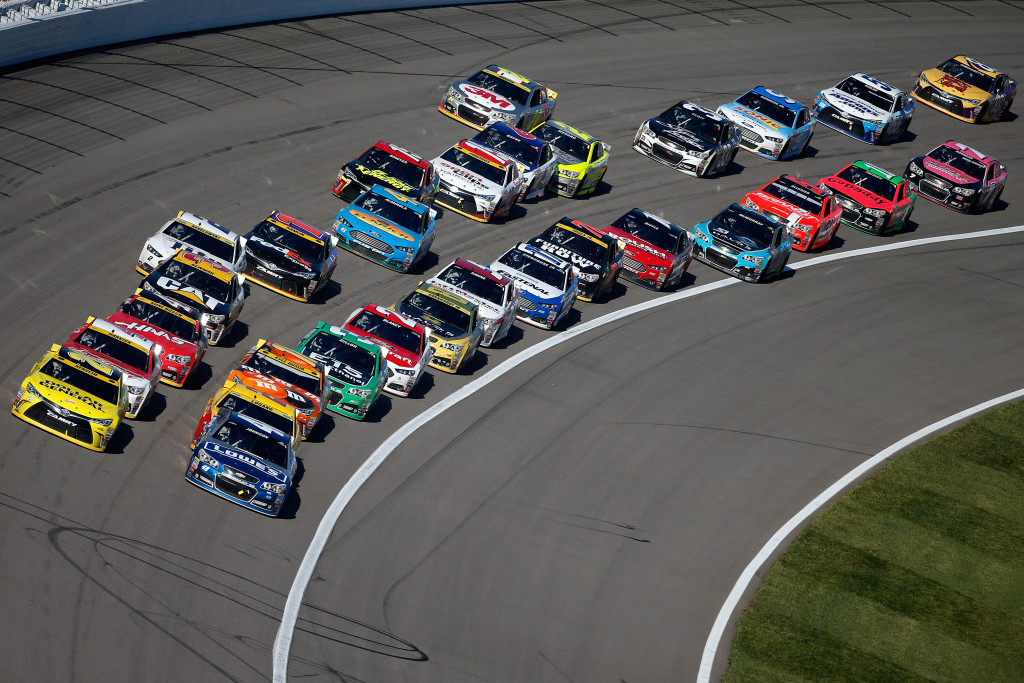 Up next for the NASCAR Sprint Cup series is the CampingWorld.com 500 at Talladega SuperSpeedway on Sunday, October 25, starting at 2 p.m. EDT on NBCSN.