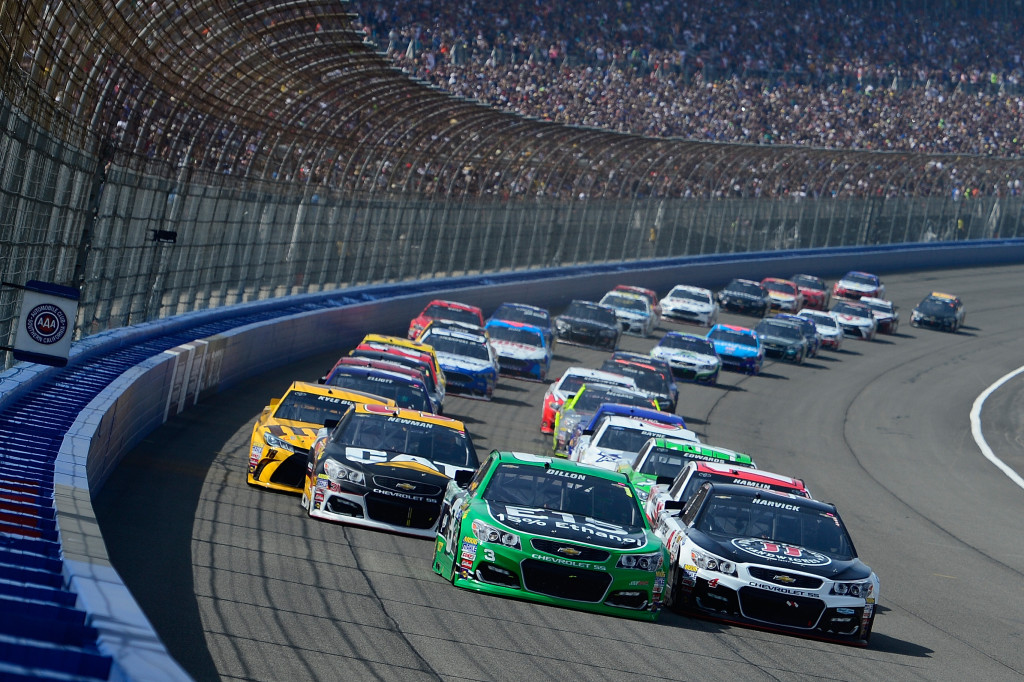 It appeared it would take the heroics of Superman to save Jimmie Johnson from the clutches of the Sprint Cup field to claim his 77th victory in Sunday’s Overtime finish at the Auto Club 400 at the Auto Club Raceway.

Kyle Busch blew a tire on lap 198 of the 200-lap event bringing out the yellow flag.  The leader, Kevin Harvick and the rest of the field pitted for fresh rubber and fuel.  The hustle of Johnson’s Lowe’s crew moved him up from seventh to third on the restart and that was all Johnson needed to prove his mettle.

On the green flag, Johnson gave Harvick a major push to the front clearing the field with the outline line of Denny Hamlin and Joey Logano falling back.

It was off turn two, when Johnson powered his Chevy past Harvick into the lead and on to victory winning by .772 of a second.  As part of the “Batman v. Superman: Dawn of Justice,” promotion, Johnson’s team were decked out in Superman livery and Dale Earnhardt, Jr,’s ride in Batman colors. 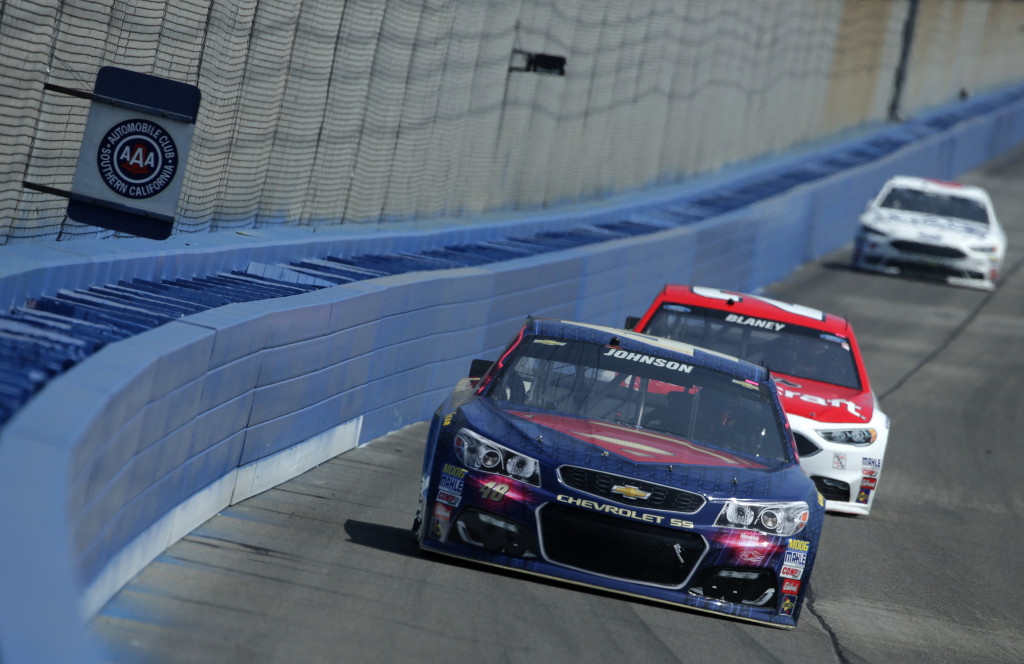 “I got a great run off of Turn 2, and I thought ‘Man I’ve got a shot at this thing, which I didn’t expect to have.  Harvick has been so fast. I cleared him and kind of got away.  We saved our best for last, for sure.  I told everybody Superman kicked Batman’s butt and it happened (teammate Dale Earnhardt Jr. finished 11th).”

The victory was Johnson’s second win of the 2016 Sprint Cup season after winning at Atlanta in late February.

Harvick, who finished second, was disappointed about the outcome after dominating the race for 142 laps.

“That sucks,” said Harvick, who has finished second 20 times in 77 events since joining Stewart-Haas Racing in 2014, his championship season.  “Just way too tight right there. Couldn’t put the throttle down.  Wouldn’t turn.” 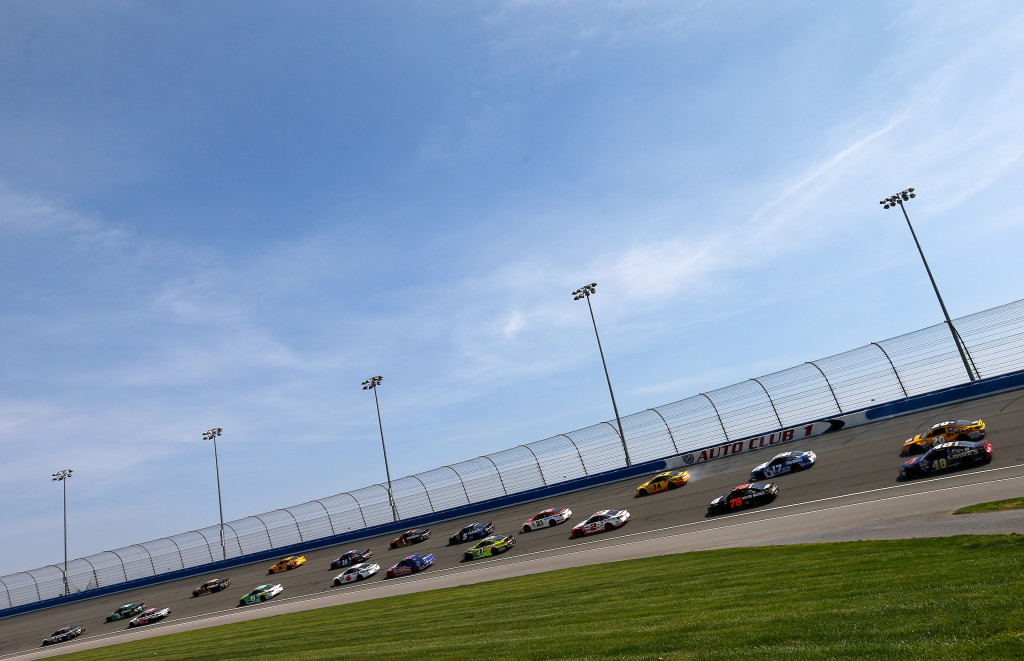 Harvick described the late-race caution as a “worst-case scenario.”

“We weren’t very good on restarts for four or five laps, unless we were all by ourselves,” said Harvick, who nevertheless retained the series lead by 11 points over Johnson.  “The No. 48 was able to hang with us, and we just weren’t able to drive it in like I needed to, just didn’t have the front tires turning and the back wouldn’t grip.  Still, a good day for us.  We’ll keep at it.” 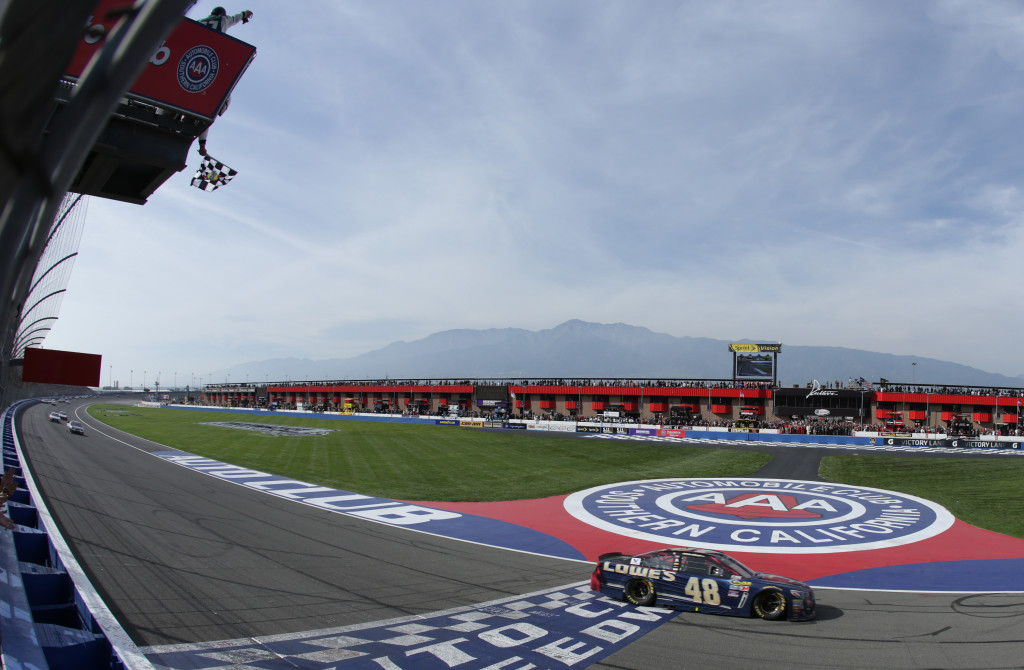 The average speed of the Auto Club Speedway was 137.213 mph.  There were six caution flags for 33 laps with the 26 lead changes among eight drivers.

The next NASCAR Sprint Cup race will be in two weeks after the Easter break gathering at the scenic Martinsville Speedway for the running of the STP 500 on Sunday, April 3 airing on FOX Sports 1 with a 1 p.m. EDT green flag start.