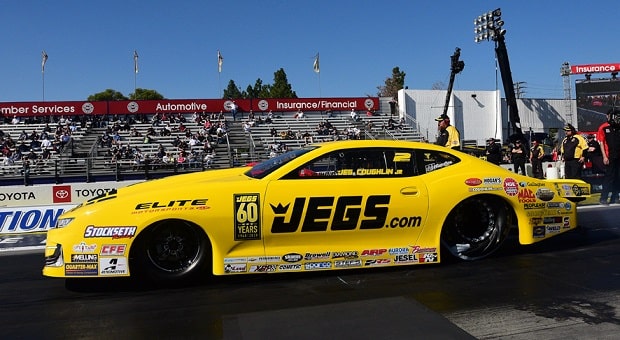 It appears two of the biggest stars in current NHRA Pro Stock Mello Yello competition are hanging up their full-time helmets at the close of the 2020 season. Earlier this year, Summit Racing’s Jason Line announced he’d be stepping out of the cockpit and paying added attention to shop duties at the team’s North Carolina headquarters.

Now Jeg Coughlin Jr., owner of five Pro Stock championships, has decided he’s done with full-time competition in the category. He’s dubbed this final year his “Breaking Barriers Tour,” alluding to his many racing accomplishments over the years.

After 2020, he intends to compete in selected Lucas Oil races at the Sportsman level, as well as some local (he lives in Ohio) and national bracket races. Coughlin isn’t ruling out the possibility of returning to Pro Stock for the occasional race, given the right opportunities.

“Since 1997, I’ve been able to live out my biggest childhood dream by racing with my family and following my Dad and older brother Troy into the professional ranks, racing a Pro Stock car,” Coughlin Jr. said. “We’ve been able to win six championships – five in pro Stock – and 82 national events in a variety of classes. It’s been a remarkable run.

“It certainly hasn’t been an individual effort,” he continued. “It’s taken so many talented crewmen and crew chiefs, engine builders and chassis experts, my incredible family, everyone at JEGS and all the other companies that have partnered with us through the years. I couldn’t have asked for a better scenario.”

Coughlin’s prime rationale for calling a halt to his full-time racing career is the amount of time and effort required to compete professionally. Although NHRA did reduce Pro Stock’s schedule from 24 two 18 events last year, the demands were significant enough for Coughlin to call a halt and step back. The reduction allowed him extra work days at JEGS, the family enterprise, as well as time with daughter Carly, 5, and his 23-year-old son Jeg III, who graduates from college this spring and is embedded in the professional golfing PGA Tour.

While Coughlin Jr. considered a 2019 exodus, the 50th anniversary of Pro Stock called to him. “NHRA has some neat things planned to celebrate the 50th year of Pro Stock and our company is celebrating its 60th year in business. We’ll be able to promote that occasion with our race program. Plus,” he said, “I’m turning 50, so it seems like a bunch of things fell into place to continue through 2020.”

Coughlin Jr.’s nephew Troy Coughlin Jr., TJ, tested the bright yellow car at Bradenton, Fla. last week, making 21 pulls and ending up with consistent runs in the 6.5-second range. He’s said racing Pro Stock has always been a goal, despite starting his NHRA career with Kalitta Motorsports in Connie Kalitta’s dragster. Will Troy be the Coughlin racing with Elite Motorsports next year?