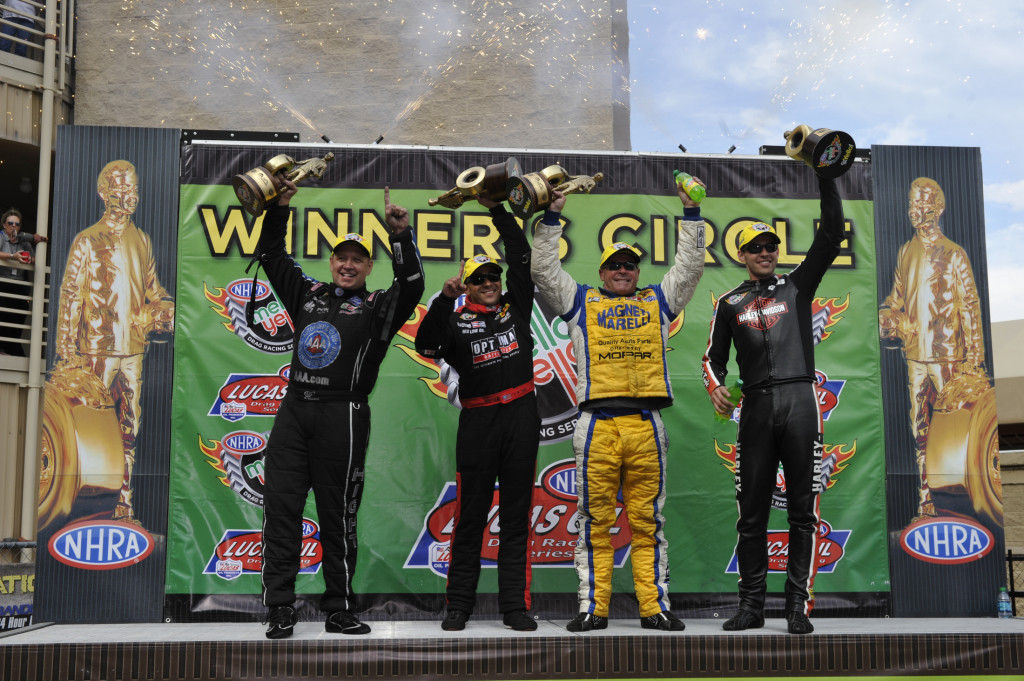 Top Fuel racer J.R. Todd last tasted victory in the fall of 2008, but on Sunday at the Mopar Mile-High Nationals, he got his chance to drink Mello Yello from the winner’s circle once again.

In addition, Allen Johnson repeated as ‘King of the Mountain’ in Pro Stock, Funny Car’s own Robert Hight won for the fifth time in 2014, and Andrew Hines rode to his fourth win in Pro Stock Motorcycle this season.

The moment J.R. Todd got a phone call from Connie Kalitta to drive one of his Top Fuel dragsters, his life has been a race.

The win for Todd is the seventh of his career and his first since joining Kalitta Motorsports as the full-time driver in March.  It is also his first NHRA event win since Dallas at the Texas Motorplex in 2008.  He garnered his first NHRA Top Fuel event win in Denver in 2006, becoming the first African-American to accomplish the feat in the world’s quickest and fastest class of auto racing.

“What an amazing day for me, my team, and everyone at Kalitta Motorsports,” said Todd, a 31-year old native of Lawrenceburg, Ind.  “I just can’t thank Connie (Kalitta, team owner and crew chief) enough for giving this opportunity to drive such an awesome hot rod.

“Our dragster got better every round today, and I knew we had a good chance to win, but you never know until you see that win light come on in your lane.”

“These things are hard to come by whether you are full time or part time,” said Todd.  “I knew at the time I got the opportunity to drive for the Kalitta group it was probably the best opportunity I was ever going to have to win one of these things.”

With the victory, Todd moves from 10th in points to the eighth with only four races left until the Countdown to the Championship, which begins in Charlotte in September.

“I’m pretty solid now but I want a cushion,” he continued.  “I want to make the Countdown because after that, anything can happen.  We were fortunate enough to put a little distance on the guys behind us and gain on the ones in front of us.”

His dragster was the quickest Top Fueler in each of the four elimination rounds except for the opening round.

As a driver, Brittany Force earned her pay on Sunday with a better reaction time in three out of the four rounds of eliminations. She was leading in the finals before engine woes.

“We went out there today and had some great runs,” said  Force.  “I was proud that on the final run I was able to leave on Todd as that was one of the main things.  I wanted to make my team proud and make sure I was doing my job as driver.  It was a close race, I saw him right next to me and I knew it wasn’t going to be a pretty good run as I could feel the engine starting to come apart but I kept my foot in anyway trying to get that win.”

John Force Racing had three chances to win the Mopar Mile High NHRA Nationals on Sunday and for the first time since debuting their Top Fuel dragster in 2013, JFR had two Funny Cars in the final round and Brittany Force in the Top Fuel final.

Hight picked up his fifth win of the season, tying a career high, and his third win at the Mopar Mile High Nationals.  He also evened his career record with Force, 16-16 and he now has a 3-2 lead in final round meetings.

Hight started the season with four wins including three in a row earlier in the year. Today’s win was the eighth for JFR in fourteen races this season.   Since his win at the Southern Nationals, Hight has only had one semi-final round appearance.

“We were doing well and we just had some bad luck here and there,” said Hight, a 24-time winner.  “You need to have some luck and even when we were winning earlier we were getting some luck.  It is good to be back.  In 2012 we won four races in a row and then it took another year to get a win.  Stuff like that was crossing my mind.  If you look around it is not that easy to win out here.  There are a lot of good Funny Cars in this class.

“I was racing the 16-time champ in the final.  He won last week so he is on a roll.  We just had to go up there and do what we knew we could do.  We came out with a brand new race car this weekend.  We want to make sure it is all ready for the Countdown.  If my guys wouldn’t have told me it was a new car I would not have known.”

This was the 43rd all-JFR final round and the second time Robert Hight and John Force have opposed one another at Denver where Robert also beat John to win in 2010.  This was the 11th Denver win for JFR.  Hight has won in 2005, 2010 and 2014.  Just qualifying locked up Hight’s Countdown play-off berth but he was not focused on the championship yet.

“We just go one round at a time,” said Hight.  “That is how Mike Neff (crew chief) races.  Usually that pays off with a lot of round wins.  Nothing would mean more to me than to go to Sonoma and win because that is like my home track.  This is a big win and we are going to celebrate this one tonight.

“That is exciting.  We have some unfinished business.  We want to win this Western Swing.  We are working really well together.  Mike and Jimmy (Prock, J.Force’s crew chief) are talking and we are working well as a team.”

Hight defeated veteran Todd Simpson in the first round and then faced teammate Courtney Force in the second round.  In the semi-finals he squared off against fellow Ford driver Tim Wilkerson.

The triumph is the 24th of Johnson’s career and fourth of the season, and continues another amazing streak, advancing to the Mopar Mile-High NHRA Nationals final round for the eighth-consecutive year.

With track temps over 100 degrees and a real altitude of over 9,000 feet, Johnson started hot out of the No. 2 spot, unleashing a 6.933-second elapsed time and the track-record fastest speed ever at Bandimere Speedway, 199.23 mph, to send home Tommy Lee in the first round.  Johnson took down Chris McGaha to move on to the semifinals, clocking a time of 6.959 seconds, 198.50 mph.  The Greeneville, Tennessee native then ran down Dave Connolly with a 6.952 second run, 198.64 mph run to advance to his eighth-consecutive final round appearance on ‘Thunder Mountain’, and the 50th final of his career.

“This team just continues to find a way to do it,” said Johnson, who with the victory is now second all-time in Pro Stock wins at Bandimere, behind only Pro Stock legend Bob Glidden.  “We want to win here and my guys step up and I step up.  It’s a confidence thing.  It’s just deep in our gut and we keep doing it.”

Also announced on Sunday was a three-year extension of Mopar’s title rights sponsorship of the Mile-High Nationals, which began in 1989.  The brand’s current 26-year relationship with the Bandimere’s family Thunder Mountain track and continuous support of the national event is the longest running title sponsorship in the NHRA Mello Yello Drag Racing Series, and among the longest in all of motorsports.

Andrew Hines rode his Screamin’ Eagle/Vance &Hines Harley-Davidson to his fourth race win of the season in Pro Stock Motorcycle when he defeated Michael Ray in the finals.  Hines recorded a pass of 7.426 seconds at 184.35 mph to the trailing run of 9.033 seconds at 103.64 mph.

“Up here, every little move is compounded because you don’t have enough power to overcome mistakes like short shifts or body movements,” Hines said.  “This place also throws your mental timing off.  You have to be focused, and thankfully, I had a V-Rod that went straight down the track.  I lived here (in Colorado) for 10 years, and this place is very special to me.  I made my first laps here, and I love this facility.  I love the fans and the scenery.  We might have had an advantage when we lived here, but lately, the Arana’s have dominated.  They’ve been No. 1 in qualifying for the last three years.”

The NHRA Mello Yello Drag Racing Series returns to action at the NHRA Sonoma Nationals at Sonoma Raceway next weekend as the second segment of the Western Swing on July 25-27.